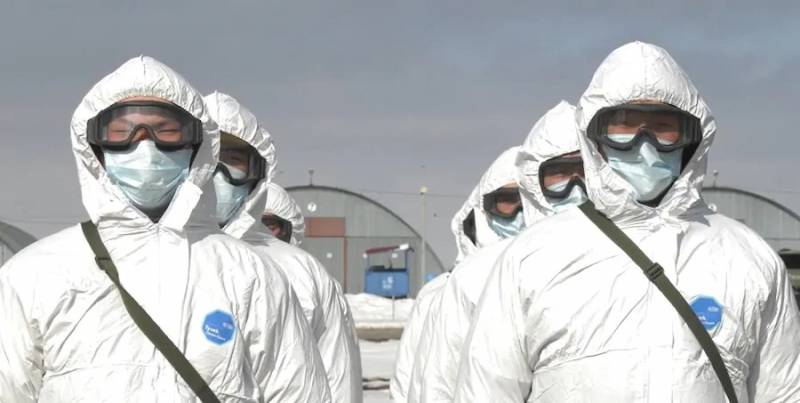 Coronavirus is such a cover operation for the global crisis of capitalism. Western financial institutions and elites act with such synchronism, it is obvious that they were ready for the virus.

Since the end of the 1970th century, humanity has been living in a new phase of the crisis of capitalism, a consumer society that has become global. The West overcame previous crises with the help of world wars, the destruction and development of the territories and resources of competitors. In the 1980s and 2008s, the West was on the verge of a new crisis and the collapse of the entire system. However, the destruction of the USSR and the socialist camp (the defeat of the USSR in the "cold" third world war), their plunder, allowed a new crisis of the capitalist system to be averted. He came already in XNUMX, but then he was flooded with money. The leading central banks of the world, following the US Federal Reserve, issued a mass of unsecured money. They deceived the whole world, including their citizens, bought a lot of “junk” papers, preventing anyone from going bankrupt. They inflated a new financial bubble, even more huge than before.

As a result, the crisis of capitalism, globalism and consumer society in 2008-2010. froze. But his reasons have not gone away. The system itself is vicious. Robbery, parasitic in nature. Financial and speculative, usurious capitalism. Making money out of money. A society dominated by the principle: “Get rich at all costs!” The society and religion of the Golden Calf.

Over the past decade, the planet has steadily entered a state of "perfect storm." Insoluble contradictions and problems accumulated in all countries. And in the rich countries of the core of the capsystem - the USA, EU countries, Israel. And in the "world factory" - China. In Russia, India, Japan, Brazil, Argentina, Mexico, Turkey, Iran, Saudi Arabia, Egypt, etc. The “matrix reset” process has been launched. We saw him in the form of the "Arab spring." Wars in Libya, Iraq, Syria and Yemen. In the opening of the first front of the fourth world war - the Middle East. In the appearance of the "black caliphate". In the collapse of Little Russia-Ukraine, the civil war in Lesser Russia. In laying the foundation for the "Ukrainian front." In the militarization of the Asia-Pacific region, where several hotbeds of war have also been prepared (Kuril Islands, Korea, Taiwan, etc.). In the "war of the elites" in the United States, where Trump is trying to save the American empire, and the globalists are ready to sacrifice the United States, to arrange "perestroika" there. On the run of the UK from the EU. In the creation by Erdogan of a new Turkish empire. The US, Israel and Saudi Arabia are at risk of war against Iran. In the gas, and now the oil war. There are many signs of approaching global turmoil.

That is, the causes of the current crisis are quite objective, they have been accumulating for decades. And the coronavirus, which is clearly not enough for a pandemic, has become an excellent reason for “rebooting” the entire system. Now there is the culprit of all crises and catastrophes - the virus! Not a Western development project (parasitism on humanity) that has become global, not capitalism, not a consumer society and the "golden calf", but a virus! Coronavirus has become the "Hitler" of our time, on which you can hang all the sins and mistakes of the global elite (de facto mafia).

Therefore, panic, an informational-psychological epidemic, so rapidly spread around the planet. Hence the adoption of tough measures that do not correspond to the scale of the epidemic and the level of mortality from it. The danger from cancer, cardiovascular disease, alcohol and drugs is much higher! But for some reason they do not declare war against them! The numbers of patients on the planet are insignificant for the declaration of a pandemic - about 210 thousand people on March 20, 2020. Of the 7 billion people. It is worth noting that humanity prepared ahead for such a scenario. They shot a lot of disaster films, zombie apocalypse, "resident evil", etc. The virus was perfect weapons against the old world, for its collapse.

In the beginning, the "Chinese factory" was stopped. Everything seemed to be reversible. But then blazed in Europe and the United States. Where governments shut down countries, stop air traffic, production, stop their activities for several months. At the same time, exchanges are falling, cryptocurrencies, gold are depreciating. The oil war begins. Everything is falling! And these processes are obviously coordinated. Western elites were prepared in advance, the collapse was agreed.

Thus, coronavirus is an integral part of a big game. The cover operation, the veil behind which the global elites hid the "matrix reset". A psychic, informational method has been found to replace the world "hot" war, which is impossible in the presence of nuclear missile arsenals among the leading powers. At the same time, they insured themselves in advance from street protests, unrest and revolution. It is impossible to protest against the epidemic and the measures taken against it. Everything will be written off to the virus. The world was piled into a crisis. The collapse of the previous model of globalization will lead to a rollback. The revival of imperialism, the "game of thrones", the collapse of the planet into several large empire blocks. In particular, we see Trump trying to save the American empire. Erdogan is building his own. In Europe, we may soon see the “fourth Reich” based on Germany and France.

For us, this is a chance to revive our Russian empire. On the basis of the “Russian code” - justice (socialism) and the ethics of conscience. Otherwise, the society of the “golden calf” will kill Russian civilization and the Russian people (the root cause of the extinction of our people).

Ctrl Enter
Noticed oshЫbku Highlight text and press. Ctrl + Enter
We are
The world we leave, the world we enter, and the world between themWho should the United States?
Military Reviewin Yandex News
Military Reviewin Google News
297 comments
Information
Dear reader, to leave comments on the publication, you must to register.