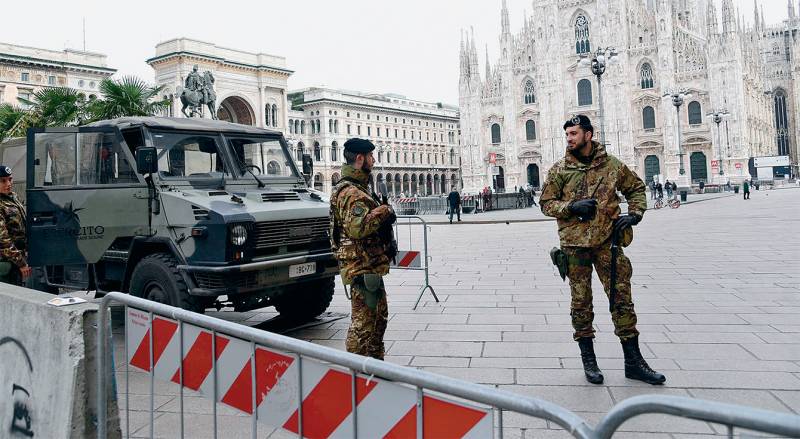 The culprits of the global crisis hide that the root cause of the systemic crisis is speculative, parasitic capitalism. Making money out of money. The dominance of a society of consumption, extermination and self-destruction, which devours our green planet, has caused a biosphere crisis. The Golden Calf Society, where the goal of life is enrichment.

The oil war and the virus

The "oil war" of the Russian Federation with Saudi Arabia and other Arab countries - oil exporters, recalls the situation in 1985. When Saudi Arabia began the economic war against the USSR (with the filing of Washington), having increased oil production and collapsed the price of "black gold". As a result, if by 1980 the price of oil on the world market peaked at $ 35 per barrel (taking into account inflation over $ 90 at prices of the 2000s), then by 1986 it fell to $ 10 per barrel or lower (about $ 20 at the beginning of the XNUMXst century).

Then, the “collective West” - the USA, European countries, Japan, that is, consumers of “black gold” - won from falling oil prices. The countries affected by OPEC (Organization of Petroleum Exporting Countries). Nigeria, Mexico and Venezuela are on the verge of bankruptcy. The situation was difficult in Algeria and Libya. In the Soviet Union, which was going through a period of “perestroika,” the deterioration of the external economic situation became one of the prerequisites for a socio-economic catastrophe. The USSR collapsed and pushed back the crisis of capitalism for a while. The West was able to sack the socialist camp and the USSR-Russia, pushing back its crisis due to the death of a competitor.

Now capitalism, liberalism and consumer society have again led the planet to a global turmoil crisis. Global plague coronavirus is just one of the manifestations. It is rather an informational-psychological pandemic that is pushing the world into a new “great depression” than a truly dangerous virus. It seems that we in the Middle Ages and the West swept the "black death", killing from a third to half of the population of entire countries. Or at least a “Spaniard” from the First World War, who killed 5-10% of patients. But there is nothing of the kind and close. And the panic is fanned more and more. The very same China harshly quarantined a wave of illness. Now the epicenter of the virus is Europe, with its consumer society, pampered and corrupted people, for whom the death of several people is already an occasion for hysteria. Critical thinking and the ability to analyze is completely killed. More people die from drugs, alcohol, tobacco, cardiovascular diseases and road accidents than from coronavirus. For some reason they are not declaring war on them.

However, the consequences of the information-psychological pandemic will be real: severe financial and economic breakdown, socio-political crises across the planet, wars, famines and epidemics of other diseases (against the background of the collapse of the healthcare system, which degraded during the complete domination of the “golden calf” society).

who benefits
The current panic with the virus, the collapse of stock exchanges and the oil war are beneficial for the financial ruling houses of the ruling West. Financial capital was behind all the world wars: the First and Second World War, the third, which killed the USSR. Now the time has come for a new global slaughter. Capitalism and loan interest are the basis of all world crises and wars. You cannot endlessly parasitize on the planet and humanity.

In the 2000s, after a brief stabilization against the backdrop of the fall of the social bloc and the plunder of the countries of the socialist camp, the capitalist world that has become global, and consumer society, the Golden Calf society with its main slogan “Get rich”, again caused a systemic crisis. In 2008, the crisis was flooded with money when the leading central banks of the world lowered key rates to zero or even went negative. This measure only delayed the collapse for a while. The fundamental causes of the crisis have not disappeared, on the contrary, they have become deeper. A new crisis can become harder and worse than the Great Depression, which caused the Second World War. At the same time, the global elite understands that the classical war in the era of nuclear missile weapons impossible. Therefore, the third world war was "cold." The West waged an informational, ideological, economic, diplomatic war, a war of special services against the USSR. Local conflicts were allowed in third world countries.

Everywhere their crises are ripening, revolutionary situations are brewing. The rich get richer, the poor get poorer. The middle classes are disappearing. Property stratification again leads to the appearance of closed castes. Against the backdrop of "digital madness", there are archaic zones, practically new slaveholding and feudal societies, on the planet.

Obviously, it is necessary to find the extreme ones, to lay responsibility. Someone must play the role of Hitler in order to hide the real culprits of the systemic crisis and work out new social technologies for controlling society. The introduction of emergency situations, quarantine, digital methods of control over the “plebeians”. The panic caused by the virus has become a detonator for a new wave of global crisis. Now begins the recession, long overdue. And allegedly not the ruling elites and the financial oligarchy, but the “virus” are to blame for it. The usual snag.

The culprits of the global crisis hide that the root cause of the systemic crisis is speculative, parasitic capitalism. Liberalism with his making money out of money. The dominance of a society of consumption, extermination and self-destruction, which devours our green planet, has caused a biosphere crisis. The Golden Calf Society, where the goal of life is enrichment. The religion of money and quick profit, turning man himself into a merciless virus that destroys the Earth. But you have to pay for everything. The world, created by parasites, usurers and speculators, flew to hell.

We are in Yandex Zen
The world we leave, the world we enter, and the world between them
What we lost
120 comments
Information
Dear reader, to leave comments on the publication, you must to register.