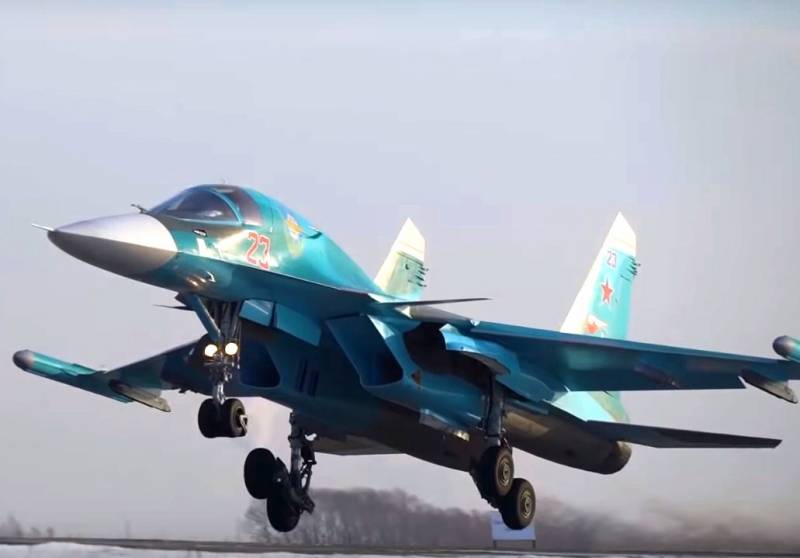 In 2020, the Russian Aerospace Forces should receive several dozen modernized Su-34s. As you can see, the multipurpose fighter-bomber is still in demand in the Russian military aviation.


The development of the Su-34 began in 1986. The aircraft was supposed to replace the Su-24 bomber, which was widely used in almost all local conflicts in which the Soviet Union participated. Afghanistan, both Chechen campaigns - everywhere the Su-24 took an active part, but by the beginning of the 2000s. the life of the bomber came to an end. Therefore, it was decided to launch the Su-34 in mass production.

His first in stories The Su-34 fighter-bomber flew thirty years ago on April 13, 1990. But the interval between the flight of the prototype and the flight of the first production copy stretched for 16 years. Only on October 12, 2006, the first Su-34 production aircraft took off into the sky. Finally, on March 20, 2014, the Su-34 was officially adopted by the Russian Air Force.

It is clear that the Su-34 is a high-quality machine and much more efficient than its predecessors. Long range, large carrying capacity, modern equipment - this is not a complete list of the advantages of the Su-34 over the former Soviet front-line bombers. During the fighting in Syria, the Su-34 aircraft have proven themselves due to the high accuracy of the hit. This was facilitated by the advanced optical sighting system installed on the aircraft.

However, many are surprised by the fact that the Su-34, despite its good performance, is never produced in the export version. According to the author of the Chinese edition of Sina, the reason for this is a certain discrepancy between the Su-34 and the requirements for specifically multi-role fighters. The Chinese author writes that the Su-34 remains an excellent front-line bomber, but it nevertheless solves highly specialized tasks. Therefore, to classify it as a multi-functional fighter would not be entirely correct.

Su-34 perfectly fulfills attacks on land and sea targets. It is capable of hitting enemy infrastructure, its military equipment, which is natural for a front-line bomber. But for the right to be called a multi-functional fighter, writes Sina, this is not enough.

So, to conduct an air battle with the Su-34 is not as good as that of other multi-functional fighters, but for this type of aircraft it is one of the defining characteristics. In the conduct of air combat, the Su-34 is inferior to both the American F-15 and the Russian Su-30, while the F-15 modification is able to conduct high-quality air combat and take on a large payload.

But the author comes to the conclusion that Russia, most likely, needs just such an aircraft - more of a front-line bomber and, to a lesser extent, a fighter. It doesn’t matter that the Su-34 is not delivered to other countries, but for the time being it is quite coping with the tasks that the Russian Air Force sets before it.

However, in another article of the Chinese edition, the author admits:

Su-34 is really a very good car for air strike. The aircraft can take on all Russian ground strike operations.
The Chinese audience agrees with this opinion.

For large countries, for offensive or offensive and defensive air forces, attack aircraft is the main type,
- writes one of the resource commentators.

Thus, the Russian Su-34 aircraft meets a completely adequate assessment in China. By the way, given that the American edition of Military Watch recognized the Su-34 as the best strike aircraft in the world, you can really be proud of the bomber.

That is why it was decided to supply dozens of such aircraft to the Russian Aerospace Forces. In total, by 2020, the Aerospace Forces of the Russian Federation plan to obtain, according to open sources, up to 200 Su-34 aircraft, completely replacing the outdated Su-24.

We are in Yandex Zen
The world market of armored vehicles. Part of 3
Situational analysis of the death of the MH17 flight (Malaysian Boeing 777), made on the basis of engineering analysis from 15.08.2014
28 comments
Information
Dear reader, to leave comments on the publication, you must to register.