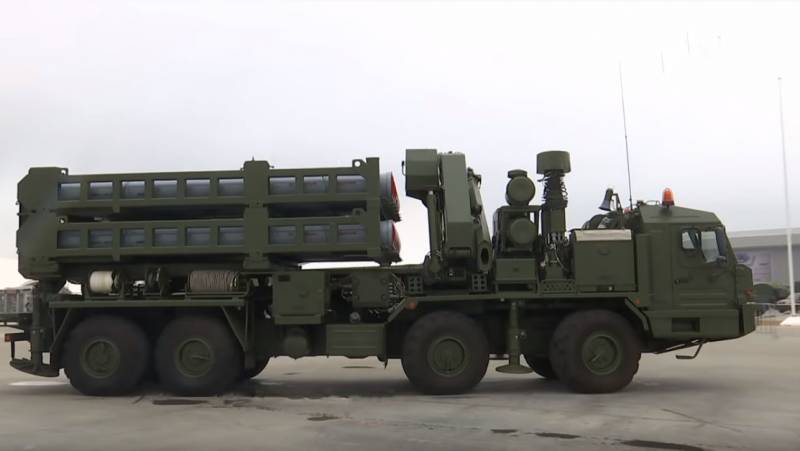 The first S-350 Vityaz anti-aircraft missile system officially entered service with the Aerospace Forces (VKS), the latest complex calculations have already begun to master the technology at the training center in Gatchina. This was reported by the press service of the Ministry of Defense.

The capabilities of the new complex were demonstrated to reporters. Calculations C-350 conducted a training to detect and destroy a conventional enemy.

The combat crew of the S-350 air defense system demonstrated its skills, destroyed electronic firing of a conditional enemy and made a march to a new position area
- added to the military department.

The transfer of the first S-350 Vityaz air defense system to the anti-aircraft regiment of the Russian Aerospace Forces was reported in December 20th. The transfer took place at the Kapustin Yar training ground in the Astrakhan region. The equipment was supposed to arrive in the Leningrad Region in January this year.

SAM "Vityaz" is able to work in automatic mode, in which the calculation ensures the deployment of air defense systems and control over the actions of the system. The maximum number of simultaneously hit aerodynamic targets - 16, ballistic - 12. The maximum range of destruction - 60 km, height - 30 km. The deployment time of the system in the combat position - 5 minutes.
Ctrl Enter
Noticed a mistake Highlight text and press. Ctrl + Enter
We are
The first firing of the S-350 Vityaz air defense missile system took place at a firing range in the Astrakhan regionAt the Kapustin Yar test site in 2012, they plan to test around 70 weapons models
49 comments
Information
Dear reader, to leave comments on the publication, you must to register.