Multi-purpose "Family Guy" and OH-58D as a threat to the "Shell-C1." How high are the chances of the CBP brainchild? 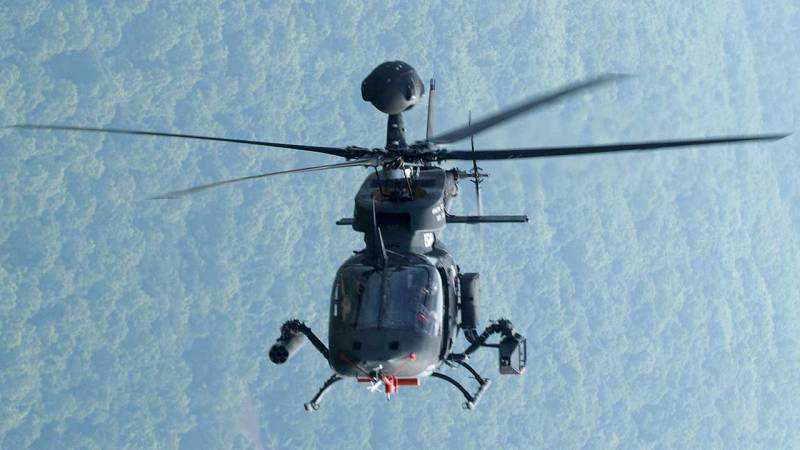 As you know, the AGM-2008A Block I “Griffin-A” multi-purpose guided tactical ammunition, which reached operational combat readiness in 176, was developed by the military-industrial corporation “Raytheon” as a relatively inexpensive, high-precision, small-sized air attack weapon, which must be integrated into special aircraft ammunition destination MC-130W "Dragon Spear", as well as aircraft support artillery family AC-130W "Stinger II" and strike reconnaissance UAVs MQ-9 "Reaper / -ER" Command of the US Special Forces and the United States Air Force.

The sufficiently high efficiency of the early airborne Griffins, demonstrated during the filing of precision-guided attacks on terrorist enclaves in remote areas of Afghanistan in late 2010 - early 2011, served as the main argument in favor of the start of designing more advanced and long-range modifications of tactical guided munitions family "Griffin" equipped with single-mode solid propellant solid propellant rocket engines with different periods of burnup of solid propellant charges, and, accordingly, range.

The most famous of them is the BGM-176B Block II "Griffin-B" multipurpose tactical missile, which is part of the ammunition of the Mk 60 multipurpose tactical missile systems deployed on Cyclone-class patrol boats. Missiles of this type are placed in quadruple rotary cylindrical transport and launch containers and have a range of about 5500 m when launched from a surface carrier (ultra-low height). The main purpose of these products is to cover patrol ships and orders of small KUGs from massive boat attacks of a potential enemy during operations carried out in the littoral zone. Meanwhile, tactical missiles BGM-176B Block II can be easily adapted for use in weapons control systems of ground units, attack reconnaissance helicopters and UAVs, as well as tactical aircraft aviationThis is facilitated by the ability to synchronize the inertial navigation system of the rocket with the MIL-STD-1760 multiplex data bus.

The most eloquent proof of this is the software and hardware integration of Griffin-B missiles in the weapon control systems of OH-58D Kiowa Warrior attack and reconnaissance helicopters. Due to the minimum weight and size parameters (weight - 20 kg, hull length - 1140 mm and diameter - 140 mm), two quad transport-launch modules with 58 tactical missiles AGM-8B Block can be placed on the suspension nodes of each OH-176D attack and reconnaissance helicopter II (no more than 200 - 220 kg together with transport and launch modules).

Possibilities of the shock tandem "OH-58D -" Griffin-B "and" Shell-C1 "in a duel situation. The situation is not in favor of the US Army Aviation

Against this background, the assessment of the ability of the most advanced domestic anti-aircraft missile and artillery system “Shell-C1” to withstand tactical Griffin-B missiles and their carriers is of particular relevance. After all, it is easy to assume that in future conflicts OH-58D Kiowa Warrior operating at the US Army Army Aviation or ultra-low altitude drones, or Ripper shock and reconnaissance drones, under certain operational and tactical circumstances, may well enter into a “dive” with units The enemy’s air defense, with the 96K6 Pantsir-C1 ZRPK (brainchild of KBP).

On the plains of military theaters without mountain ranges, hills and gorges, any attempt to launch precision missile strikes against Panzirai-C1 batteries using Griffin-B tactical missiles would be fraught for OH-58D Kiowa Warrior crews fiasco, since when launched from an average height of about 3500-4000 m, the range of the AGM-176B will be no more than 12,5-15 km, while the range of targets intercepted by 57E6E anti-aircraft missiles is 20 km. We observe a confident defeat of OH-58D 5-7,5 km before reaching the AGM-176B Griffin-B tactical missile launch line.

And even in the case of elevated or mountainous terrain, where crews of OH-58D helicopters will be able to get to the positions of the Pantsire-C1 battery 5-7 km away, hiding behind folds of terrain, hills and other natural obstacles in ultra-low altitude mode, It is not necessary to talk about any dominance of Army aircraft of the United States. Launching AGM-176B Griffin-B tactical missiles from ultra-low altitudes to a distance of 5-7 km, in accordance with the demonstration scheme for using Griffin-B missiles from Raytheon published on globalsecurity.org, provides for the implementation of ballistic or flat trajectories flights with access to more rarefied layers of the troposphere to reduce aerodynamic drag and maintain the necessary speed qualities at the terminal portion of the trajectory.

As a result of this, on the ascending branch of the trajectory, the AGM-176B missiles will have a perpendicularly oriented position relative to the radiation patterns of radar detectors RLM SOC and guidance radars 1RS2-1E Helmet of the Pantsir-C1 complexes. In simpler terms, they will be turned to the “Armor” radar systems with a side projection having the maximum possible EPR of about 0,15 square meters. Due to this, the Helmet guidance radars equipped with passive phased arrays will be able to instantly detect, “tie up tracks” and capture Griffin-B missiles for the immediate transfer of appropriate control commands to 57E6E anti-aircraft interceptor missiles and azimuth-angle bearing 30-mm twin automatic guns 2A38M.

We are in Yandex Zen
Cheap portable high-precision pocket infantry US infantry
Year of the American UAV Reaper
20 comments
Information
Dear reader, to leave comments on the publication, you must to register.