Get rid of the poison 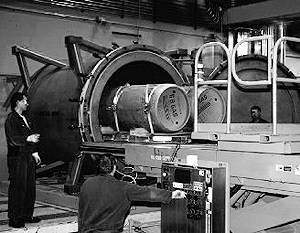 The US Army Chemicals Agency announced the elimination of 80% of its chemical weapons arsenal, ITAR-TASS reports.

According to the ministry, by October of this year, the United States destroyed 24448 tons of toxic substances and more than 2,1 million warheads.

At the current rate of disposal by April 2012, 90% of the country's chemical weapons will be eliminated, the agency said.

The destruction of chemical warfare agents is carried out at four military sites: in the cities of Anniston (Alabama), Pine Bluff (Arkansas_, Tuele (Utah) and Umatilla (Oregon). Three other complexes, which also disposed of chemical weapons, are already closed.

Chemical weapons were repeatedly banned by international agreements: the Hague Convention 1899 of the Year, whose article 23 prohibits the use of ammunition, the sole purpose of which was to cause poisoning of enemy personnel, the Geneva Protocol 1925 of the Year and the Convention on the Prohibition of the Development, Production, Stockpiling and Use of Chemical Weapons and on Their Destruction 1993 of the year. However, this prohibition was violated during wars and military conflicts. The most massively chemical weapons were used in the First World War.

The United States signed the International Convention on the Prohibition of Chemical Weapons in 1997, possessing an arsenal of 31,5 thousand tons of chemical warfare agents by that time. In accordance with the document, the US must complete their disposal by April 2012. However, non-governmental American experts note that this will not be possible before 2021, the government does not refute these conclusions.

In Russia, which joined the Convention, chemical weapons should also be eliminated by April 2012, but in early August, the Information and Press Department (DIP) of the Russian Foreign Ministry announced that they would have to extend these deadlines for objective reasons.

“We are committed to our obligations under the convention on the prohibition and destruction of chemical weapons, the priority of which is the complete elimination of the chemical weapons arsenals of a number of states, including Russia. At the same time, we do not hide the fact that against the background of the global economic crisis we faced objective difficulties of financial and technical order that forced us to extend the terms of the Convention for the final elimination of Russian chemical weapons reserves by 2,5-3, ”the Foreign Ministry said.

By order of the President of the Russian Federation on 13 in May, the Government was instructed to ensure the implementation of the program no later than 31 in December of 2015. This information was given by Viktor Kholstov, Head of the Department of Industry and Trade of the Russian Federation, presenting the 21 of September at a meeting of the Council of the Federation Committee on Defense and Safety of Soviet chemical arsenals .

On August 7, the Russian Foreign Ministry filed claims to the United States about violations in the area of ​​non-proliferation of weapons of mass destruction and arms control, some of which related to chemical weapons.

According to the Russian side, the US legislation on non-proliferation and destruction of chemical weapons allows the American side to evade compliance with the requirements of the Chemical Weapons Convention, reports Interfax. The President of the United States is granted the right to refuse to conduct inspections at American chemical facilities provided for by the Convention. In addition, samples taken during such inspections may be prohibited from being exported outside the country.

The US government submitted to the Technical Secretariat of the Organization for the Prohibition of Chemical Weapons (OPCW) a report on elimination from 2003 to 2008. parts of Iraqi chemical weapons. According to the submitted materials, within specified periods, American troops in Iraq found chemical samples of toxic substances (OM) and chemical munitions. All samples and part of the ammunition with an unknown agent were sent for identification to the USA, where they were then disposed of. At the same time, the timely notification of the OPCW was not carried out by the Americans either on the fact of detection or on the fact of the elimination of chemical weapons. Data on the conducted degassing of the area in the documents are missing.

Thus, the documents submitted to the OPCW confirm the fact that the United States has violated the provisions of the Convention on procedures for declaring and destroying chemical agents, the Foreign Ministry said.

According to the ministry, by July 2010, the Russian side had eliminated about 50% of the chemical arsenal, or more than 19,5 thousand tons of toxic substances, the Russian Foreign Ministry said.

By the time the program began, experts estimated the Russian reserves of toxic substances in 40 thousands of metric tons.

Fully chemical weapons have so far disposed of such countries that had them at the time of joining the convention, such as Albania, India and the Republic of Korea.