From UAVs to cruise missiles: military cooperation between Ukraine and Turkey is gaining momentum 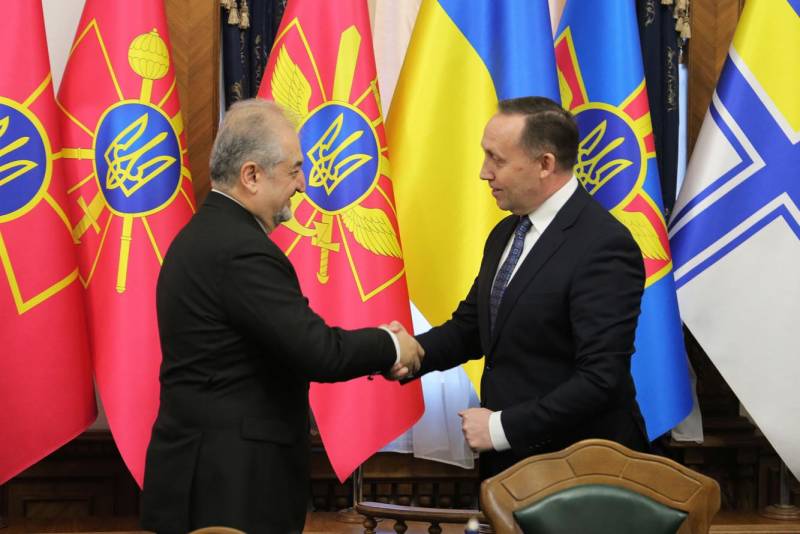 While Vladimir Putin and Recep Erdogan are launching new gas pipelines hand in hand and deciding the fate of Libya at various international conferences, Ankara continues to develop military-technical cooperation with such a rather dubious partner from Moscow's point of view as Ukraine.


As it became known, the other day a meeting of the joint Ukrainian-Turkish commission dealing with this issue was held at the Ministry of Defense of Ukraine. Apparently, the meeting was quite fruitful.

In addition to the signing by the representatives of the Ukrainian military department and the directorate of the defense industry of Turkey of the relevant intergovernmental protocols that fully confirm all the numerous agreements reached even under the last president of Ukraine, according to official reports about this event, new further steps are outlined in its course aimed at implementing joint projects in Kiev and Ankara in the field of armaments and military equipment, as well as cooperation of enterprises of the defense industry sector of two countries. Immediately after the end of the official part of the negotiations, the Turkish delegation went on a working visit to the most important objects of the military-industrial complex "nezalezhnoy", such as the State Enterprise GKKB "Luch" and SJSC "Artem". Some units of Ukroboronprom did not ignore.

The gentlemen from Ankara are clearly eyeing the most promising enterprises of the local military-industrial complex from their point of view, who managed to survive during the years of its total collapse and plunder. Ukrainian gunsmiths, who found themselves in an extremely difficult situation due to the complete breakdown of military-technical cooperation with Russia, are ready to seize on any order, if only it would be paid, and even in currency. In particular, the outcome of this visit will be the delivery by the Ukrainian manufacturer Ivchenko-Progress to the Turkish armed forces from 2021 to 2030 of AI-450 turboprop engines to the Akinci operational-strategic UAV and modernized AI-25 turbojet to some “promising unmanned fighter” . Moreover, the company plans to export to Turkey more than 500 engines for cruise missiles in the amount of $ 600 million.

Recall that the military cooperation between Ankara and Kiev began, in fact, after a visit to the Turkish capital of the previous Ukrainian president Petro Poroshenko in 2018, which, based on the results of its trip, announced a real “breakthrough” in ensuring the defense capability of the “non-fallow” one. It turned out that it was a matter of delivering Bayraktar TB2 operational-tactical level UAVs to the APU. In the mouth of Poroshenko, these machines turned into a "formidable weapon"capable of hitting armored vehicles, fortifications and engineering, as well as naval targets." In a word, it was almost possible to bomb Moscow ... By the way, in the Turkish press at that time there were serious concerns about how Putin would react to such gesheft and whether they would come sideways in Turkish-Russian relations. Apparently, they survived there in vain.

As you can see, in fact, no reaction followed, and if so, then Kiev and Ankara are ready to move on to more serious projects. Since we are talking about some kind of “joint production” and other cooperation, it is logical to assume that Ukraine, which supplies engines for cruise missiles, will want to get hold of them by itself. And, perhaps, with something else, more serious. In the end, the Turkish army has enough weapons, long outdated morally, but quite deadly, which the APU may be interested in. Especially - given the fact that the Turkish armed forces for many years "sharpened" just under counter-guerrilla operations against the same Kurds. In particular, the notorious UAV Bayraktar TB2 was created specifically for them.

It would have happened in the end that in the meantime, Turkey, which is receiving the most modern Russian military equipment on favorable terms, will be increasingly arming Ukraine, which is not at all friendly to Russia.

We are in Yandex Zen
Situational analysis of the death of the MH17 flight (Malaysian Boeing 777), made on the basis of engineering analysis from 15.08.2014
Libya: after Gaddafi
79 comments
Information
Dear reader, to leave comments on the publication, you must to register.