Protests in the US: Americans do not want to disarm 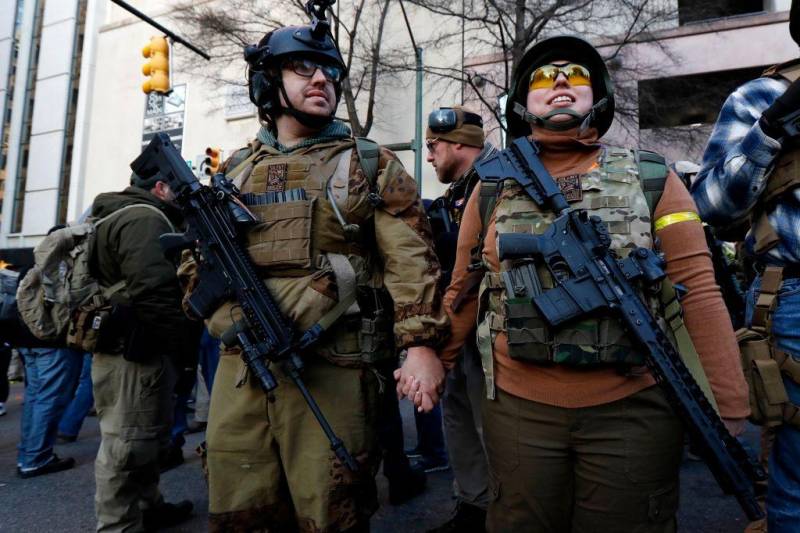 The rally of many thousands that took place on January 20 in the US Richmond, Virginia officially held the status of peaceful. Nevertheless, at the first glance at its participants, burning envy could even encompass special forces - to such an extent the demonstrators were hung with a variety of modern small arms, from pistols and shotguns to automatic rifles. The latter, however, were presented exclusively in "civilian versions" - after all, not the military, but just the most ordinary civilians, who protested against attempts by the local authorities to at least somewhat limit their ability to purchase and carry firearms, took to the streets of the city the destruction of their own kind.


The local NGO Virginia Citizens Defense League (Virginia Citizens Protection League) managed to gather, rally and organize for the procession and rally of more than 20 thousand people. Its activists used the “Lobby Day” annually held on January 20, which is a traditional time for local lawmakers to meet with “members of the public” to express deep resentment over bills SB 18 and SB 16, which are being prepared for consideration by the local General Assembly, the state parliament . The thing is that as far back as last November, the majority in both of its chambers were received by representatives of the US Democratic Party, as one of their primary tasks seeing just tightening control over the turnover of the "firearm" in the territory entrusted to them.

Calling their initiatives stupid reinsurance or “too much sticking” is quite difficult, if you remember that in May 2019, one of the Virginia Beach municipal employees, for one reason clear to him, suddenly went into the city hall and started firing at his own colleagues. The shooter, the 40-year-old Devane Craddock, was not bad: 12 corpses and four wounded. He himself was killed in a shoot-out with the police ... However, what kind of “draconian laws” do state legislators and their supporting governor, Virginia Ralph Northam, intend to introduce to prevent similar tragedies in the future? To take away all the "trunks" from the locals or something like that? Nothing like that!

The draft laws that provoked a storm of anger among gun fans are only about raising the age from which you can acquire a "firearm" to 21 years, more thorough checks of the buyer's personal data when selling weapons, a ban on the acquisition of such more than once a month (!), the creation of “safe zones” in cities where entry with weapons for civilians will be prohibited in principle. Plus, it may be “illegal” to sell army assault rifles, albeit converted into “civilian” ones. This point is particularly strong resistance.

It got to the point that communities in some cities and districts of Virginia (totaling more than 100) began to declare themselves "refugees of the Second Amendment to the US Constitution" (the one that just guarantees the right to own weapons), flatly refusing to obey state law if he will nevertheless make the announced decisions. Donald Trump, who saw in the unfolding conflict a great opportunity for pre-election PR, was not slow to speak out in support of the "rebels." He didn’t fail to snitch about this: “They come and take your weapon - that’s what happens when you vote for the Democrats!” The US President also promised all his potential voters that, remaining in the White House, he would never allow the priceless Second the amendment "was at least a little insecure."

We can only add to the above that, according to statistics compiled by reputable media such as the Associated Press and USA Today with the support of one of the American universities, the number of massacres (with 4 or more victims) committed in the United States last year even beat sad record of 2006 (38 cases). It has become the largest since the 70s of the last century. In 2019, 41 such crimes were committed, 210 people became their victims. In 33 cases, out of 41 guns, it was firearms. What is characteristic, the motive of many such terrible acts is still a mystery ... The freshest example of this kind, dating back to this year: in Grantsville, Utah, a minor shot a woman and three children with a pistol, seriously injuring another person.

Obviously, those are right who, as one of the basic principles of "advanced democracy," call the possibility of everyone who professes to freely go to hell their own way. The Americans seem to have chosen their own.

We are in Yandex Zen
Political NGOs with American and British funding in St. Petersburg
Strangulation: the context, conduct and consequences of the American naval blockade of China
208 comments
Information
Dear reader, to leave comments on the publication, you must to register.