Large US Navy ships: cut without waiting for peritonitis 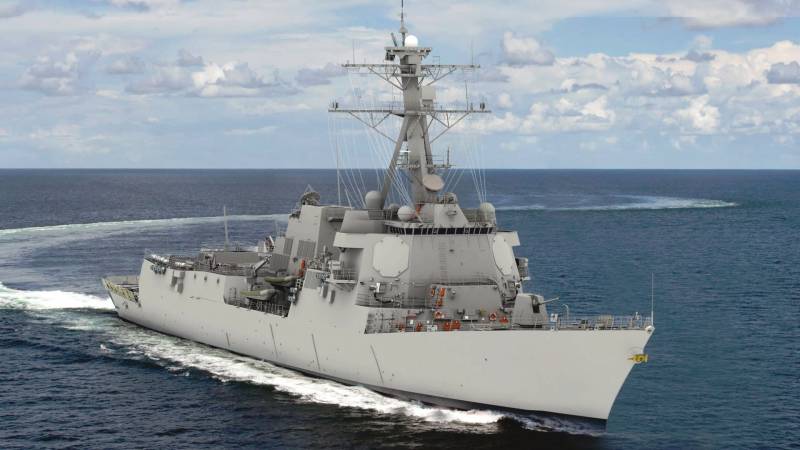 The largest naval forces in the world, with the largest funding, are suddenly forced to reduce their composition and shipbuilding programs, and this is against the backdrop of rising budget military spending.

A bit about promises

As you know, our mishandled agent Donald Trump loves to make various promises that turn out to be unrealizable, and wishful thinking. In the United States, even in Congress and the Senate, there are enough idiots who believe in an "agent", as well as in "Russian interference in the elections," but they all cannot be mistaken? Among his statements and promises, there is also a story about the rise of US nuclear power to previously unattainable peaks - with continued degradation and a fall in the size of the nuclear arsenal. And the stories about secret instruments and missiles that allow America to "maintain leadership" in the missile sphere - which is not even mentioned, but there is a lag behind Russia in a number of technologies, not even for years, but for 10-20 or more years: it's all about the same "hypersonic" technologies of maneuvering and planning warheads, hypersonic missiles, etc. And there is a promise to strengthen the missile defense system, for example, to deploy additional GMD anti-missiles with new interceptors - instead, they closed the interceptor program, opened a new one, and even want a new missile defense system.

But it seemed that the intention to increase the fleet to 355 units was quite real - with fleet Americans are doing well. However, it does not seem to come true here either.

Cut without waiting for peritonitis

The US Department of Defense has sent a plan to the White House that will reduce the construction program for destroyers of the Ural-type Arleigh Burke series 3 (Flight III Arleigh Burke) by more than 40 percent in the years 2021-2025. In total, this proposal to abandon the construction of 5 of the 12 destroyers planned under the so-called Future Defense Program, or FYDP. This plan will lead to a cut in the overall budget for military shipbuilding by $ 9,4 billion, or 8 percent, according to a note from the Office of Management and Budget of the Moscow Region for the White House. About this writes the online edition of Defense News. It is also planned to accelerate the process of reducing the number of UIC-type Ticonderoga cruisers in the fleet to 9 by 2025, having written off 13 cruisers. Last year, the fleet proposed abolishing the modernization of the Bunker Hill, Mobile Bay, Entietam, Leite-Gulf, San Jacinto, and Lake Champlain cruisers in 2021–2022, now they’ll simply be written off. ”Monterrey, Vella Gulf and Port Royal, 2022-3 years ahead of schedule, and Shiloh until 7, will also be disabled.

Thus, the fleet will not only not grow in number, but will also decrease from 293 to 287 units now. And this is not all the “gifts” for Christmas for sailors.

It is proposed (and it is proposed by the command of the Navy) to write off the first four hulls of ships of the LCS type. We are talking about ships with the names Freedom, Independence, Fort Worth, Coronado. These ships to the minimum serve at least 12-17 years, but in fact, more could be. The same "Freedom" went into operation at the end of 2008, however, right there it went into repair for several months to eliminate deficiencies.

It is clear that LCS ships of both subtypes, to put it mildly, have dubious utility in their current form. They promised a lot of things for them, and the implementation, as often happens, let us down. In addition, the first cases have a mass, obviously, to the end and not eliminated the shortcomings. So they want to send them "on needles." But the Navy, in fact, a little earlier on the contrary stated how much they needed these first ships, which they planned to use to test load modules that were late for a decade. In addition, a few years ago, the "concept has changed" by LCS. It was previously planned that when all the planned load modules are made like an anti-mine mine (the idea of ​​a minesweeper of 3000 tons smells like idiocy), anti-submarine and others, then replaceable crews trained for a certain type of load modules will be attached to each hull. Then they decided that each ship would receive its own constant type of load, and, accordingly, the crew, and they were going to train them on these 4 first ships. Now all of a sudden these ships were "not needed." Now the Navy will have to think about where to test the new modules and where to train the crews later.

Three DTDs, amphibious transport docks of the Whidby Island type, including the ancestor of the class, as well as the DTDs "Germantown" and "Gunston Hall", also plan to write off, although they had to serve at least 8- 14 years. A decision on them has already been made, and the ships will soon be ready for cutting. And 4 more UIC-type cruisers of the Ticonderoga type may also be decommissioned ahead of schedule.

Moreover, amid heated discussions about the dubious future of aircraft carriers in the sharply changed conditions of the war at sea (we are talking about long-range supersonic, and especially hypersonic anti-ship missiles, it’s clear whose), and their usefulness as such in wars with even relatively strong adversaries (it’s not even about the Russian Federation or at least the PRC), and against the backdrop of problems with the serviceability of existing aircraft carriers and the lack of knowledge of promising Fords, and the expected early decommissioning of one of the aircraft carriers, another event happened.

Congress has cut funding for research and development under the F / A-XX prospective naval attack fighter program, which will replace the F / A-18E / F Super Horn in the 2030s. In the past year, only $ 5 million was allocated for this program, and most of the increase went to research in the field of creating a promising engine for this aircraft.

In fact, the program is now at the level of the initial definition of requirements for the aircraft, in general, the stage of Wishlist and finger-driving on paper, but it is also important - all programs begin this way. This year they wanted to get a little more than $ 20 million, but they only gave 7. The okoloflotsky circles, or rather, the representatives of the decks, immediately began to make comments on this subject that aircraft carriers, so they say, are at a crossroads, should they the road of oblivion, following the superdreadnoughts, dreadnought, armadillos and war elephants, and then there’s not even an attempt to develop an airplane, which, in their opinion, is “very important”. The Super Hornet, in general, is a good aircraft, but not for the 2030s, and the US Navy categorically does not want to replace the fleet completely with the lame, oblique and crippled F-35C - and they are doing it right.

Where does the money go?

All this reduction with the growth of the military budget looks strange. Of course, one cannot compare the US military budget in absolute numbers, one must look at comparable arms prices, which are growing by leaps and bounds in the USA, but still, even at comparable prices, the budget has practically reached the highest figures under Obama or even Bush Jr., i.e. large amounts are allocated. And at the exit we have a reduction in the crew and construction programs, and ships in the long repair lines. Yes, and the poor do not have enough money to paint, judging by the shabby look of many American ships in foreign and their ports.

Of course, the ship in sailing is always ripped off by the waves, but the ship that left the base a week ago cannot and should not look like the Gazelle of the minibus, which doesn’t give a damn that it pours mud through the holes in the back of passengers. Suppose that they were really forbidden by some not-so-clever heads to tint at sea, supposedly for environmental reasons (the truth is, it’s true, not the Americans, but the French, justifying the obscene appearance of the Navy ships), but he won’t need a week or two painting. What happens and where does the money go? A difficult question, especially if the auditors of the United States Department of Defense "did not find" significant violations in the expenditure of funds (or did not seek).

But the fact that the financial blow for the purpose of saving is delivered precisely to surface ships, and large ones, without touching the US submarine fleet, suggests that the threats are "new types weapons“It’s the surface fleet at headquarters that is taken seriously. And they are gradually de facto moving away from the concept of large ships, while reducing their number. After all, the reduction in the number of destroyers and cruisers will be followed by a reduction in the number of aircraft carrier groups. As well as the construction of, for example, practically liquidated earlier class of frigates - now the issue is still being resolved.

At the same time, the White House does not want to hear anything about the rejection of the promise of a “fleet of 355 units” and requires the US Department of Defense to “work through the issue” so that both the wolves are fed and the sheep are safe. That is, to reduce the crew and expenses, and somehow get 355 units. What are you talking about? They demand to work out a plan on how to get the desired fleet of 2030 units by 355 in a combination of ordinary and unmanned ships. To do this, you even have to change the law, and now unmanned underwater vehicles, crewless boats, etc. are not considered warships, but are used as ship equipment. But sailors are skeptical of an unmanned venture. Small boats and underwater vehicles are one thing. Another is to create a crewless, say, missile corvette or missile frigate. The simplest question that does not have an answer: how to carry out the struggle for the survivability of such a ship, say, when getting holes or in a fire? Populate it with craft robots from the Boston Dynamics that run to unfasten bulkheads with sliding stops in the iron fingers of iron hands? They are only good in videos, and not on a burning deck or in a flooded compartment of a ship, or, say, in a storm. And so far they are of little use to them more than from our robot FEDOR in his first trip into orbit. But dozens of such questions can be asked. And supporters of the "deserted frigates" will not be able to answer them yet. The “Flying Dutchman”, on which there were no living sailors, wandered forever along the seas only in legends. A real ship without a crew cannot and cannot, for a long time, probably.

But on the research and testing of such ships, you can learn good amounts of money, which would be enough to timely repair part of the current fleet.