What did we do in Afghanistan 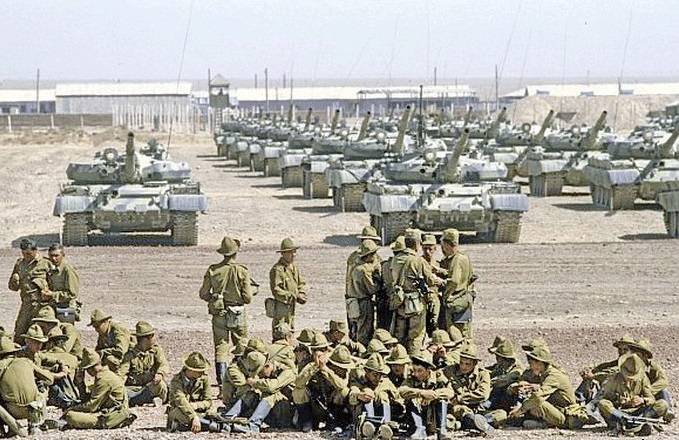 40 years ago, on December 25, 1979, the Afghan war began. On this day, columns of the 40th combined arms army crossed the Afghan border. It was a just and necessary war. The Soviet Union secured its southern borders.


However, soon in the USSR, destructive forces, “perestroika-democratizers,” took up, which led to the sad results of the Afghan war. Afghanistan became a trap, which allowed our internal and external enemies to accelerate the process of decomposition of the Soviet state.

From a military-strategic point of view, this was a necessary war. We had to secure our southern borders and maintain a friendly regime in Afghanistan. If we hadn’t done it, the Americans would have done it. As it happened in the 2000s, when the US and NATO occupied the strategic strategic bridgehead. Afghanistan allows you to influence a huge region: India, Iran, Central Asia (and through it to Russia) and China. Thus, the Soviet Union secured its southern borders. For many years, he delayed the appearance of NATO troops in Afghanistan or the victory of gangs that established gigantic supplies of heroin to Russia.

We entered Afghanistan legally - at the request of its top political leadership. In this case, for all its history Afghanistan has never lived so freely and freely (just look at the photos of the Afghans of those years), as under the protection of our troops. The Soviet Union invested heavily in the country, built roads, bridges, schools, hospitals, housing, developed agriculture and industry, beat gangsters who were involved in drug trafficking, and established a normal life. A cultural revolution, modernization took place in Afghanistan, the country became secular, moving away from archaic.

Later, when ordinary Afghans were able to compare the behavior of the Russian Shurai with the actions of the Western occupiers, they repeatedly noted that the Russians were real warriors, creators, teachers, helped the people build a new, better life. Americans, on the contrary, are destroyers, they are only concerned with profit. If Russians considered Afghans as people, then Americans didn’t consider local as full-fledged people (as in the past: “a good Indian is a dead Indian”). Western intelligence agencies took control of the production and transit of drugs, repeatedly increased their production, turning Afghanistan into a huge global heroin factory. The bulk of the people were thrown into poverty, survived as best they could, gangs and drug dealers ruled the country. Archaic won, there was a rollback to the past, to feudal and tribal orders. Now Afghanistan has become a "zone of inferno", chaos, from where waves of instability spread across the planet.

In fact, Russia, if it solves internal problems and restores its position in the world, will still have to return to the Afghan problem. This is a matter of the world "drug factory." Thus, according to the Federal Drug Control Service, twice as many people die every year from heroin of Afghan production in Russia than Soviet soldiers died during the entire nine-year war in Afghanistan. A large part of the population of Afghanistan is no longer able to engage in normal creative, productive activities, and it simply does not exist. All life is connected with drugs. This is a question of radical "black" Islam, the "caliphate" that leads the offensive from the southern strategic direction. All of Turkestan, which only degraded after the collapse of the USSR, can already become a continuous zone of chaos in the visible future. Waves of millions of refugees will cover Russia, including thousands of “caliphate” fighters. The southern border is almost open, huge, no natural boundaries. These are flows of illegal migrants, Islamists, weapons, drugs, various smuggling, extremist materials, etc. These are also issues of the presence of the United States and China in the region.

Did you fight badly?

In perestroika and post-perestroika times, our troops in Afghanistan poured mud. Liberals and Westerners tried to show how the Soviet army was ineffective, outdated. That it was a useless and criminal war. How Afghans hated Russians, how we committed “war crimes”, etc. In fact, the Soviet army fought in Afghanistan quite efficiently and skillfully. She led the matter to complete victory. Almost the entire territory of the country was under the control of the 40th Army and the forces of the Government of the Democratic Republic of Afghanistan (DRA). The local army, the Ministry of Internal Affairs, and special services were also under our control. In addition, in the second half of the war, they began to rely on special forces of the GRU, targeted operations to eliminate caravans, field commanders, etc., which was reasonable in a war with irregular enemy units.

Of course, there were mistakes. In particular, they did not think enough about troop deployment. It was more reasonable not to introduce combined arms units or introduce them for a short time to defeat the largest gangs. Act mainly with the help of military advisers, military experts, special forces, the GRU and the KGB. Conduct point operations using the Air Force. Act like the West, that is, form your own forces from the local population, arm, train, give advisers, support with fire (air strikes). Maintain Najibullah's friendly regime. To create a full-fledged Afghan armed forces under our control, to supply them with weapons, equipment, ammunition, fuel, this was enough to keep Afghanistan.

As shown by the military operations of NATO and the United States in Afghanistan, Westerners fought worse than the Soviet Army. At the same time, local rebels in the 2000-2010s were not supported by powerful external forces. And the Mujahideen against the USSR were supported by the Anglo-American special services, the Islamic and Arab world, which in the person of the Saudis was in a strategic alliance with the USA against Moscow. The Americans have created several strategic bases, they control the capital (partially), communications and drug trafficking. And yet, they do not care about the Afghan people, what is happening around.

The issue was in the political will of the Kremlin. The Soviet Union could maintain control of Afghanistan, suppress mujahideen squads, but for this it was necessary to solve the issue with the sponsors of bandits and terrorists. The United States acted mainly with the help of the special services of Saudi Arabia and Pakistan. And the USSR could well put them in their place. For example, by demonstrating the military power of the Red Empire, by targeted attacks on terrorist nests, field camps, and arsenals in Pakistan. Physical elimination of the organizers of international terrorism, Islamic radicalism. However, the spirit was not enough. The Soviet Union was already "rebuilt", broken, prepared for surrender. Therefore, the Soviet Army was not given the opportunity to defeat the main sponsors and export centers of the war.

Therefore, glory to the Russian soldiers - “Afghans” - they honestly and courageously fulfilled their duty to the Motherland. And the "perestroika" capitulists, who had withdrawn Soviet troops from Afghanistan, were given the gangsters, drug dealers, Islamists, and then the West, who were entrenched there, the great Soviet Union was destroyed, a tribunal was needed, even posthumously.

The USSR would have collapsed without the Afghan war. Destructive processes in Soviet civilization were begun under Khrushchev. That is, Afghanistan was not the main factor, but only one of the prerequisites, detonators. However, the war was used by both internal and external enemies of Soviet power. Inside the country, hysteria was escalating over allegedly huge losses, financial and material costs. As a result, a public opinion was formed that we lost the war. The same opinion has become the leading one in the “world community”.

External enemies of the USSR also used this situation to the maximum. Former CIA Director and US Secretary of Defense Robert Gates admitted in his memoirs “Way Out of the Shadow” that the American special services began to help the Mujahideen six months before the Soviet Army entered Afghanistan. In fact, the Americans provoked the Kremlin. Former US National Security Advisor and prominent Russophobe Zbigniew Brzezinski confirmed Gates’s words:

“This covert operation was a brilliant idea! We lured the Russians into an Afghan trap. ”

The West has very skillfully used the situation. The whole powerful informational, propaganda machine of the “world community” instantly made the Muslim world out of Russian enemies. A Muslim front was immediately formed against us. Anglo-Americans have long dreamed of inciting the Islamic world against Russia. Given the confrontation with the United States and NATO, this was a second front. Before the war, the Americans had prepared contacts with local warlords, bandits, and immediately began supplying weapons, ammunition, ammunition, and communications equipment. Even the anti-American Iran is taking up arms against the Russians. Pakistan becomes the rear base, bridgehead and training camp for terrorists and bandits. The huge financial resources of the Arab monarchies, primarily Saudi Arabia and the United Arab Emirates, were directed to the war with the USSR.

During the Afghan war, intelligence services of the West, the Arab monarchies and Pakistan created an “export” mutation of Islam, heavily implicated in big money and drug trafficking. On its basis, a “caliphate” will be created later. "Black" Islam is merciless not only to the "infidels", but also to Muslims of other movements. Washington also obtained from Saudi Arabia the release of huge quantities of oil to the world market in 1985, which led to a fall in the price of “black gold” (by 1986, the price had fallen to $ 10 per barrel or lower). This was a strong blow to the economy of the USSR, which by that time was already well hooked on the “oil needle”.

Thus, an anti-Soviet alliance was formed from the West and the Muslim East. China acted against the USSR. Everything was done to defeat the Russians in Afghanistan. The Americans hoped that Afghanistan would become a springboard for postponing the war with Soviet Turkestan (Central Asia). However, the Afghan war alone could not bring the Americans and their allies victory over the USSR. Afghanistan with the help of the USSR was quickly transformed for the better, the people had never lived so well. The Soviet army and the Afghan security forces controlled by us controlled almost the entire country. The power of Mohammad Najibullah was solid. That is, we did not lose the war. The Soviet elite, led by Gorbachev, surrendered the country and the army.

In fact, Moscow started the war in conditions of internal decay, which was already in the open phase, when part of the Soviet elite openly prepared for the surrender of the USSR. That is, the army, law enforcement agencies did everything they had to do, fulfilled their duty, fought well. But the decision to surrender Soviet civilization, Soviet power, the USSR and the Soviet Army was already taken. Hence the result.