Long-range protests. How will the color revolution in Iran come to Russia? 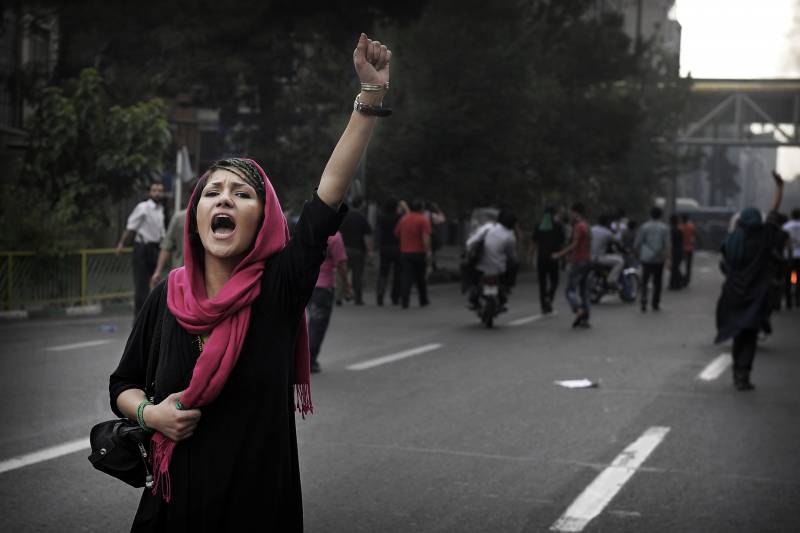 Well, you, no State Department!

The protests in Hong Kong, which in China is called the administrative district of Hong Kong, began, if I remember correctly, five years ago, in the distant 2014 year. The “Revolution of Umbrellas” and this is all exotic, with southeastern features, went from there and appeared just then. Then the first versions of what was happening appeared: from the revenge of the British special services for the oppression of British companies to the quite expected (and most likely, it should be noted) version of the "hand of the State Department."

Of course, from the latter, many fighters with conspiracy therapies immediately reduced cheekbones. Well, as much as possible, really ?! Just a little, immediately the State Department - you might think that people and without Americans have nothing to protest about.

Frankly, there is something to protest about. True, by strange coincidence, the most active protests are now taking place in Hong Kong, Iran and Chile. And two of the three points are very beneficial for the United States precisely in terms of maintaining protest activity. But this, of course, is just a coincidence - the Americans are out of business, all coincidences are random, the stunts were performed by professional stuntmen ...

In fact, all current protests have a definite reason. In Chile, this is an increase in metro fares, in Iran, an increase in gas prices, and in Hong Kong, protests are triggered by some political decisions by the autonomy authorities. In particular, the reason for the current protests was the decision to ban the protesting masks covering the face, and the pending adoption of amendments to local legislation allowing the deportation of those arrested to countries with which there is no corresponding agreement. Including, as you might guess, this also concerned the possible deportation of Hong Kong residents to China. Strictly speaking, the absence of such a measure is an interesting legal case, since it is impossible to transfer those arrested within the framework of one country, but such are the ways of unification under the slogan "One country - two systems."

Although this is probably a somewhat superficial look at what is happening. For example, in Hong Kong, one of the main irritants is just the sky-high housing price. Young families and students can’t afford not just buying, but even renting a more or less decent apartment, comparable to the usual Russian “kopeck piece”. As a result, they have to huddle in apartments, comparable in size to the kitchen in our usual "Khrushchev". Retractable transformable furniture allows you to create some semblance of comfort, but you must admit that sleeping when you have a washbasin over your head and a toilet has been disguised at your feet is a rather dubious pleasure. 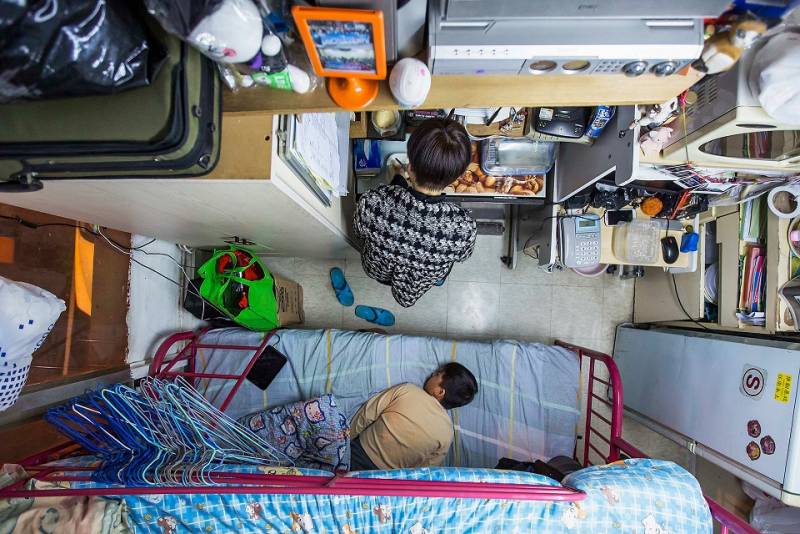 In Iran, the reason for the protests was the increase in gas prices. Moreover, the increase is sharp, shock. So, if you choose a limit of 60 liters per month, then you have to buy gasoline three times more expensive (an increase of 200%) than before. It should be remembered that the price of gasoline was previously subsidized in Iran and one of the lowest in the world. For example, as of 2018, gas to Iranians was six times cheaper than Russians, eight times cheaper than Chinese, and 10-12 cheaper than citizens of most EU countries.

Probably, the desire of the Iranian government to stop the "freebie" from the point of view of the economy is quite rational. But the country's population was clearly not ready for this. Especially when you consider that the standard of living in Iran is also far from European. As a result, not just protests broke out in the country, but real unrest, the victims of which were already citizens, police, and many gas stations, other commercial and state institutions.

It got to the point that a special order of the Iranian government imposed very strict restrictions on Internet access in the country, the activities of providers were taken under very tight control, and any attempts to organize protests through social networks and instant messengers were either impossible or harshly suppressed by the authorities. Nevertheless, the situation in the country, to put it mildly, is restless, and some even talk about a possible “color revolution” in Tehran.

Yes, you need to be objective: no one forced Tehran’s authorities to raise fuel prices and provoke unrest right now. Just like no one forced the Hong Kong authorities to throw firewood into the fire of barely dying unrest, making or intending to make decisions that were very controversial from a certain point of view. Nevertheless, one should not discount the efforts of our precious “partners” who have long and tirelessly hit the sore points: Iran, for example, is already experiencing the third wave of popular protests after the first in 2011 and the second in 2017-2018. And every time the Americans were partly the direct culprits of the actions: sanctions, incitement in social networks, provocations, and partly provided their political cover, making various decisions related to the support of protesters.

They do the same thing now. For example, the US Senate has adopted a number of resolutions relating to Hong Kong. In particular, the US Department of State is now obliged to report annually to lawmakers on whether Hong Kong really maintains its autonomy. In the event that representatives of the State Department consider otherwise, it could be a question of sanctions against China itself or the termination of the most favored nation status in trade for Hong Kong. In this case, it will at least be considered economically dependent on China, and general rules for trade with the United States will apply to goods and services from the former British colony. And this, we note, is the mildest, most gentle version of the development of events.

Decisions are also made that delimit the export of small arms to China. weapons, police equipment, chemical means of control of demonstrators and the like of "dual-use" goods. In principle, the effectiveness of such a solution is very doubtful, because the Chinese are quite able to produce all this themselves. But here we must pay tribute to American lawmakers - the system has been working this way for many decades, and in this case is not going to deviate from the established rules. In addition, sanctions have the opposite direction - it will now be much more difficult for the Chinese to export similar goods to the United States, and companies and factories found to have been involved in the production of means to disperse demonstrations may receive personal and very serious sanctions.

China, of course, has already recognized such legislative activity of the Americans as interference in its internal affairs. The authorities of the Hong Kong Autonomous Region took a similar position. But this is unlikely to annoy the American senators, who see this as not only a way to support the protesters, but also an excellent opportunity to annoy Trump and his more than once announced “big deal” with China. It is clear that in such an environment it will be very difficult, if possible at all, to conclude it.

Everything with Iran is much more transparent: Washington does not hide its hostility towards this state, and so many sanctions have been imposed against Tehran that it’s even hard to say what else can be invented there. But they speak of their support for the protesters in the United States as a matter of course, and it would be strange if the American intelligence services did not react at all to what was happening.

Separate and ... look at both?

Now a little about what to expect Russia. And here, first of all, we note that, for some strange coincidence, it so far does without large-scale protests. It is all the more strange that it is Russia and its political elite that look most vulnerable to attack, the weakest and most vulnerable. But let's not pretend that we don’t understand anything - yes, almost at 99%, this is the merit of the Russian special services. The opposition in the country is fragmented, its most radical parts are not just divided, but they hate each other fiercely, so you can hardly be afraid that it will act as a united front. Rather, one can assume the opposite: the “left” wall will become behind the Kremlin if the country is smelled by the real threat of liberal revenge. In turn, supporters of Navalny and the liberal idea will also conclude a truce at any time with the Kremlin, just to prevent the new "Bolsheviks" from coming to power.

On the other hand, the opposition itself has managed to compromise itself quite strongly. Thieves demanding the overthrow of other thieves are just as ridiculous as the "revolutionaries" who make their candidate for the presidency quite bourgeois, in their own terminology. And this separation, on the one hand, is already so deep, and on the other hand, how masterfully done, it remains only to pay tribute to the guys in gray jackets - you know, you can!

Therefore, despite all the nonsense committed recently by our "economists", the positions of power are still quite strong. And the Kremlin still has a lot of resources to strengthen its positions - it is enough to simply disperse the government in order to soar again in the wake of popular adoration. But there’s still “cloachena” ... Oh, excuse me, there is still the Higher School of Economics, there are a lot of “oligarchs” who, due to some misunderstanding, are still walking free.

The position of China also looks quite strong. Yes, the unrest may continue for a long time, but it is obvious that the Western special services still have not enough resources to overturn the power of the CCP. Indeed, even neighboring Macau, which in a sense is Hong Kong’s political counterpart, has so far failed to raise protests, what can we say about the country's internal provinces.

But for Iran, to be honest, alarming. He is economically not so strong, and he does not possess such sophisticated special services as Russia. Yes, he resisted the most serious external threats and even tries to play the role of a regional superpower, but ... But as we have had more than once the opportunity to see, the state’s internal weaknesses can be quite easily used to break it up. Moreover, often the reason for the next “revolution of guides” is not comparable with the scale of impending losses, nor with the political and economic consequences for the state.

That is why from here, from the south, we should expect a sudden and very painful blow for us. Because, if Tehran falls, then, inevitably, our “Central Asian monarchies” will fall. More precisely, some will fall, and some will just instantly overturn.

And then neither Russia with its “soft underbelly” nor China with its “bare back” will seem small ...

Ctrl Enter
Noticed oshЫbku Highlight text and press. Ctrl + Enter
We are
Results of the week. “In our cooperative, the board is always agreed”Results of the week. "God forbid to see Russian revolt, senseless and merciless!"
146 comments
Information
Dear reader, to leave comments on the publication, you must to register.