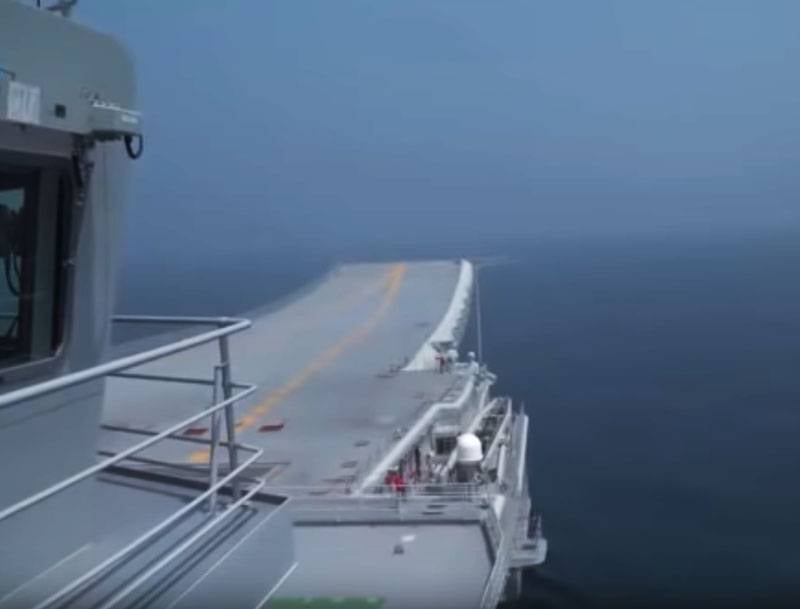 Taiwan's naval and air fleets were put on high alert the day before. The reason was the appearance of a Chinese aircraft carrier in the Taiwan Strait.


At the same time, Taipei emphasized that the PLA Navy aircraft carrier did not violate Taiwan’s maritime borders while remaining in Chinese waters.

From the Taiwan Ministry of Defense:

Several combat aircraft were alerted into the air for surveillance. We were also forced to send several warships to the area of ​​appearance of the aircraft carrier in Beijing.
According to some reports, the monitoring of the Chinese aircraft carrier and carried Japanese ships and means aviation. On which particular section of the course of the Chinese ship the Japanese carried out such observation, not reported.

In Taiwan, it was noted that the Chinese aircraft carrier passed through the Taiwan Strait for the first time since the 2016 of the year. The aircraft carrier of the PLA Navy also entered the strait after the 2016 (we are talking about the aircraft carrier Liaoning). Taipei believes that Beijing is trying to demonstrate strength against the backdrop of deepening relations between Taiwan and the United States of America.

A distinctive feature of the Chinese patrol this time was that we are talking about the first aircraft carrier built in China - Type 001A "Shandong". He continues to pass the tests.

The danger has passed. We ask our citizens to remain calm.
At the same time, Taiwan does not say that a few days before the appearance of a Chinese aircraft carrier in the Taiwan Strait, a U.S. Navy warship passed through this strait (and for the 9 time since the beginning of the year), which caused a negative reaction from Beijing.

From a Taiwan Defense Ministry report:
We urge Beijing to cherish peace and stability in the region.
Ctrl Enter
Noticed oshЫbku Highlight text and press. Ctrl + Enter
We are
Reports from the militia of New Russia for 27-28 September 2014 of the yearYuri Drozdov: Russia prepared the role of the sacrificial calf
15 comments
Information
Dear reader, to leave comments on the publication, you must to register.