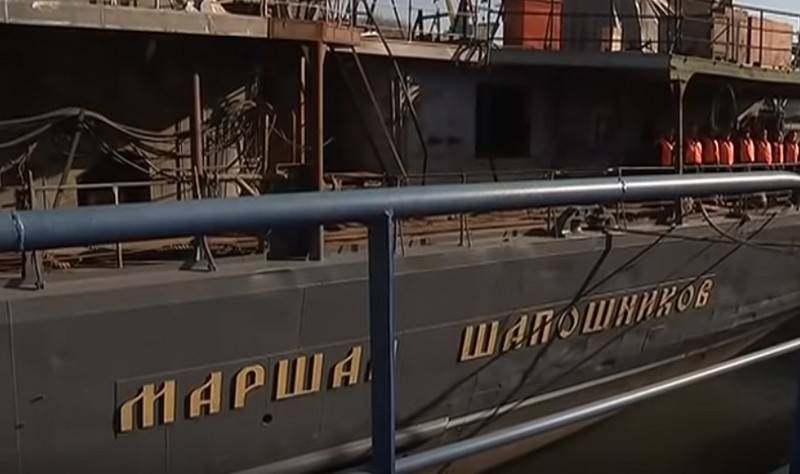 Undergoing repairs and modernization, the former large anti-submarine ship, retrained to the frigate "Marshal Shaposhnikov", was taken out of the dry dock and moved to the outbuilding pier of the Dalzavod Ship Repair Center in Vladivostok. This was reported by the press service of the Pacific Fleet.

According to the report, the ship will continue preparations for the first launch at sea for testing the main power plant. To date, "Marshal Shaposhnikov" has already undergone dock repair, as part of the modernization, more than 20% of new add-ons have been dismantled and installed on it, and places have been prepared for the installation of new weapons.

The upgraded ship received a missile strike complex weapons
- the message says, without specifying which complex is installed on the ship.

As previously reported, the Marshal Shaposhnikov BPC was retrained as a frigate during modernization. The upgraded version of the ship should receive the Uranian anti-ship complex with X-35 missiles, universal launchers for the Caliber, Onyx or Zircon cruise missiles, the Bagira universal ship’s artillery fire control system, and the TK- electronic suppression system 25.

According to the plans of the Ministry of Defense, Marshal Shaposhnikov should return to the Pacific Fleet as early as 2020.
Ctrl Enter

We are in Yandex Zen
The second serial corvette of the 20380 project was launched at the Amur Shipyard
Dalzavod will repair more than 250 warships by the end of the year
Military Reviewin Yandex News
Read Military Reviewin Google News
37 comments
Information
Dear reader, to leave comments on the publication, you must to register.