Are the T-80BVM ready to cover the SF facilities? Weaknesses of the updated English Channel tanks 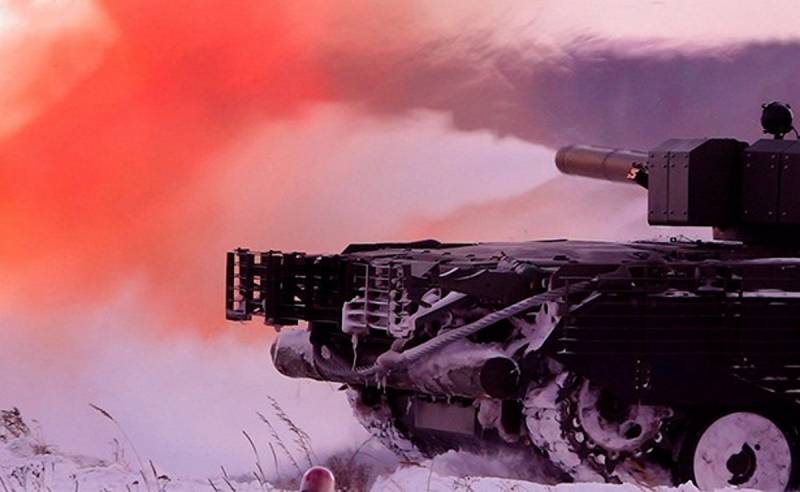 The topic of technological renewal of coastal units has gained particular relevance in relation to the 200 separate motorized rifle arctic brigade of the Northern Fleet of the Russian Navy, whose range of tasks includes covering strategically important military installations of the A2 / AD Murmansk zone in the area of ​​the north-western sections of the Russian-Norwegian and Russian-Russian Finnish borders. Indeed, the operational-strategic situation in this region has a steady tendency to aggravate. It is due to the following factors.

Firstly, by tightening the Arctic race between Russia, Norway, the USA, Denmark, Great Britain and Canada. Secondly, the completely unfounded claims of the Norwegian Ministry of Foreign Affairs regarding the "non-adaptation of the Northern Sea Route to search and rescue operations and long-distance flights." Thirdly, the construction of a promising X-band centimeter X-band radar in the Norwegian fishing village of Vardø. The latter will not only allow the Norwegian Intelligence Service and the US Air Force command to carry out radar reconnaissance of aerospace over the Barents Sea and the Murmansk Region, but will also provide the Pentagon with an extremely advantageous carte blanche for “pumping up” the Finnmark fule (province) with additional military units intended supposedly for Globe-3 cover from motorized rifle regiments of the Coastal Forces of the Northern Fleet.

In the light of the situation described above, information about the upcoming implementation of the final stage of the re-equipment of the 60th separate guards tank battalion of the 200th Omsbr (a) Coastal Forces of the Northern Fleet with the deeply improved "reactive" MBT T-80BVM provides extremely interesting food for thought by expert circles and observers, knowledgeable about the parameters of power plants, MTOs, fire control systems, weapons and armor protection of modern main combat tanks.

On the one hand, the deeply modernized English Channel tanks, which are a modification of the early T-80B / BV, boast:

- increased power density and speed of 27,7 — 85 km / h on the highway increased to 90 hp / t achieved through the installation of improved gas turbine engines GTD-1250ТФ, also used as power plants for MBT family T-80У; the integration of these engines in the engine-transmission departments of the updated T-80BV will not require significant processing of the main components of mechanization;

- integration of the more or less modern gunner’s sight “Sosna-U” into the architecture of the SLA of the tank and the PDT-7151 television sight-understudy, which provide targeted fire at 3000-3500 distances both day and night;

- the presence of developed elongated anti-cumulative screens (SCE), rubber skirts which reliably cover the 80-mm side armor plates of the hull over their entire height, thereby protecting the vertically oriented ammunition from the defeat of 30-, 40-mm armor-piercing firing APKDS-T type APMDS-M projectiles 1 / 2 used by large-caliber automatic guns such as Bushmaster III and L-70 / B;

- the re-equipment of the ammunition kit of the 125-mm smoothbore gun 2A46M1 with more modern, long-range and "penetrative" tank guided missiles 9М119М "Invar" of the Reflex complex with a tandem X-NUM mm generations.

On the other hand, being a modification of the MBT T-80BV, the updated T-80BVM tanks have the same "flimsy" cast turret with combined armor and an upper frontal hull with equivalent 530 and 450 mm resistances, respectively. As a result, equipping the tank with 4С23 elements of the Relict dynamic protection, although it provides a more dense overlap of the front projection in the safe maneuvering angles ± 35 ° (without 50-70-mm gaps characteristic of Contact-5) and protection against tandem CS , brings the level of equivalent resistance from BOPS kinetic action only to 800 — 820 mm, which is absolutely insufficient to counter modern German and American BOPS M829A3 and DM63 during tank combat at a distance of 1500 — 2000 m. What can we say about the use of m adversary latest kinetic energy penetrator M829E4 from «Orbital ATK»!

This is where you begin to seriously think about reviving and bringing to mind the MBT T-80UM1 Bars project. In addition to equipping the Arena active defense complex, the more “dimensional” cast tower of the standard T-80U (in combination with the Relic) would make it possible to bring equivalent resistance from BOPs to 900-1100 mm in safe maneuvering angles +/- 15-20 degrees providing Bars with a number of advantages over Leopards-2A6 / 7 and M1A2 SEP v3 Abrams.

We are in Yandex Zen
The response of the Northern Fleet to the construction of the Globus III radar was not long in coming. What is happening near Vardø?
Results of the week. “Russia is rattling weapons”
137 comments
Information
Dear reader, to leave comments on the publication, you must to register.