November 7 2019
43
The 20s and 30s of the last century were a tough time. The country was recovering from the civil war and intervention, but the young citizens of the young Soviet Union were already looking to the future. The idols of youth were aviators. Especially loudly pilots declared themselves after the rescue of the legendary Chelyuskinites. Of course, various circles and organizations gradually began to appear, uniting enthusiasts to conquer the sky. However, the skies of Soviet youth were clearly not enough, and even then the guys thought about rocket science. Naturally, on the shores of the Black Sea, young people did not lag behind advanced trends. 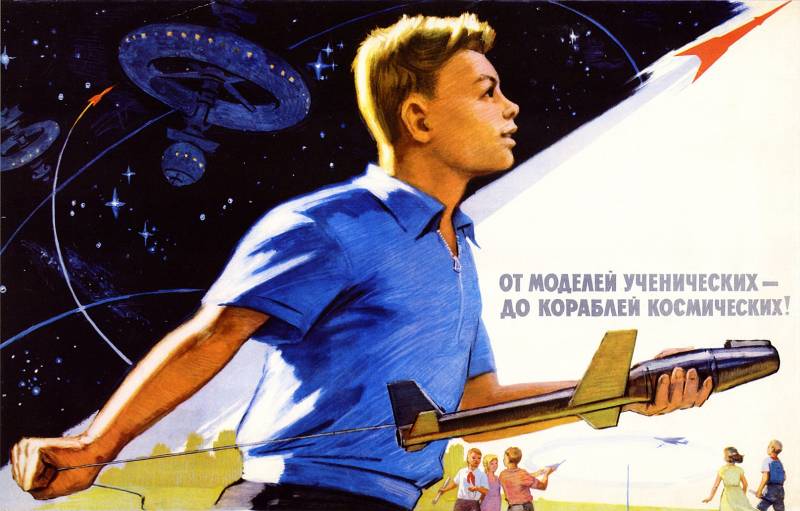 Space dreams of Novorossiysk are inextricably linked with the name of Gleb Tereshchenko and his comrades. Gleb Antonovich was born in Petrograd in 1921, although his father Anton Savvich was a native Novorossiysk, whom the service threw into the dank northern capital. Little Gleb’s health was poor. Doctors recommended that the family return to the south. Anton Savvich achieved a transfer to Novorossiysk and began to settle down. Gleb’s father built a house at the beginning of Deribasovskaya Street (now Chelyuskintsev Street) from local materials, crack stone and cement. 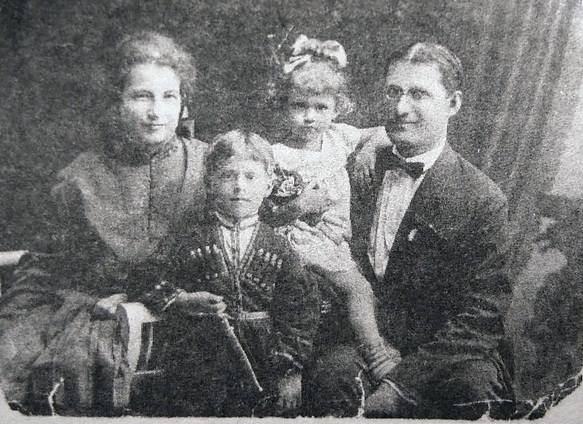 Gleb was already desperately addicted aviation. Father, an engineer by training, encouraged these impulses by subscribing to the magazine "Airplane" for his son. In his native secondary school number 3 (the former Novorossiysk male gymnasium), Gleb was an active enthusiast in the aircraft modeling circle, becoming, in fact, the head of this modest organization. Tereshchenko also eagerly absorbed any scientific information on jet technology. 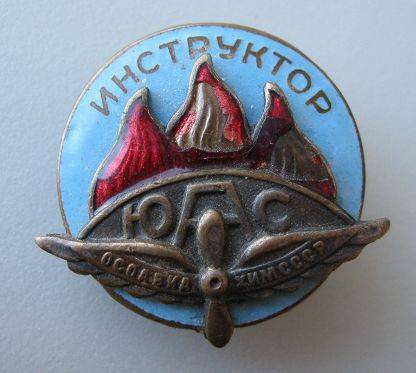 In the 30's, the enthusiasm of the young New Russians and their parents allowed the founding of a Novorossiysk flying club, located in the area of ​​the modern Cape of Love. And, of course, Gleb took a leading position in the flying club and soon in his 16 years he was approved for the position of instructor for young aircraft manufacturers, about which he had a corresponding sign from OSOAVIAHIM. Heading the flying club, Tereshchenko became one of the first Novorossiisk pilots, mastered parachuting and even joined the diving profession. He himself created the drawings of future aircraft models and developed projects for quite real aircraft, he designed parts for his brainchild and assembled models of aircraft.

First steps to the future

In the 1937 year, Gleb Tereshchenko begins the development of a jet model with a jet engine. The advanced idea was instantly picked up by other comrades in the flying club. The work was in full swing. Therefore, in the 1938 year, the director of the Palace of Pioneers, Olga Shandarova, invited Gleb and his team to head the experimental rocket aircraft modeling laboratory. In fact, it was a kind of design bureau organized by Tereshchenko, in which each led his own circle of work.

Vladimir Nogaitsev developed beam aircraft models and engines. Maria Rassadnikova led materials for lightweight models. Frida Gromova was engaged exclusively in jet engines. Pavel Fileshi was a full-time “chemist”, experimenting with various mixtures for solid fuel engines. Konstantin Mikhailov, already a student at the Moscow Aviation Institute, where he was accepted, taking into account the Novorossiysk experience, without exams, passed to fellow countrymen and colleagues all the most advanced materials on rocket science and aviation. 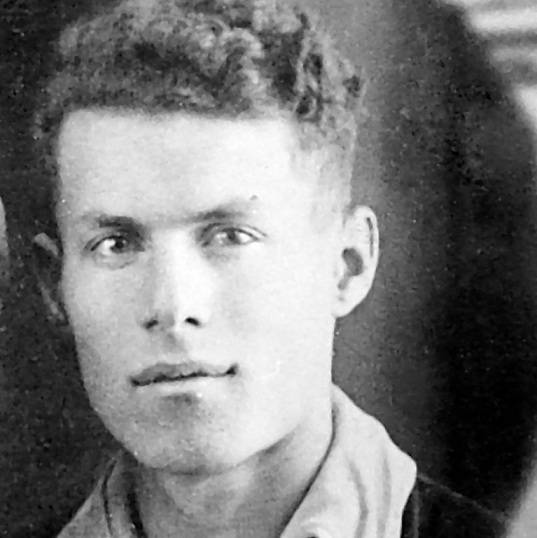 The "chief designer" of the laboratory was Gleb. Contemporaries familiar with the work of Novorossiisk enthusiasts stated that Tereshchenko thought at the level of the best design bureaus of the Second World War. In the 1939 year, laboratory research reached such a level that the Palace of Pioneers had to allocate additional premises to the Gleb team. The activities of the laboratory were no longer similar to youthful enthusiasm. Here is how one of the participants of the Tereshenko team, Pavel Fileshi, recalls those days:
“Near the dance floor (city park. - Approx. Aut.), On its southern side, a funnel was dug in 1940 in order to demonstrate its possible size from the explosion of a hundred-kilogram aviation bomb. "We used this funnel quite often to test the thrust of rockets ... it was necessary to test our next decision ... A lit rocket threw itself at the bottom of the funnel, in which it accelerated along the slopes and flew out." 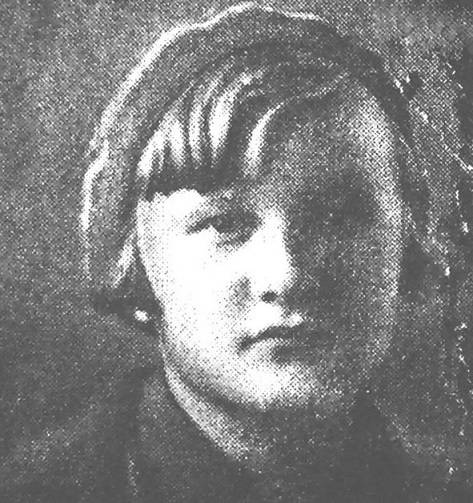 Finally, Tereshchenko suggested embarking on the implementation of ideas, as they say, in metal. For these purposes, his team literally occupied Father Gleb’s barn. The guys spent days and nights there, erecting an experimental two-seater flea-type aircraft. Alas, it was not possible to find funds to create an engine before the war. As a result, the assembled car stood in the barn until the 1943 year, until the BM-13 missile hit the structure, i.e. Katyusha. Fate has an evil irony.

However, the construction of the "Flea" laboratory activities were by no means exhausted. After all, the guys were literally eager for "tomorrow." Just the plane did not suit them. They dreamed of a rocket plane, a future jet aircraft and a full-fledged rocket. Gleb and his team, having exhausted the possibilities of solid-fuel samples experimentally, seriously began the development of liquid-fuel engines.

The following memories were left by Tereshchenko himself in one of the press materials of those years:
“Let's build rocket planes!” My comrades and I were very interested in the rocket engine. A rocket engine aircraft can reach tremendous altitude and speed. We worked a lot on the rocket plane model. Our first models whistled into the air, but at 20 meters from the start, my model fell and crashed. This did not bother us. Worked again. Now we have already become designers of rocket aircraft models. ” 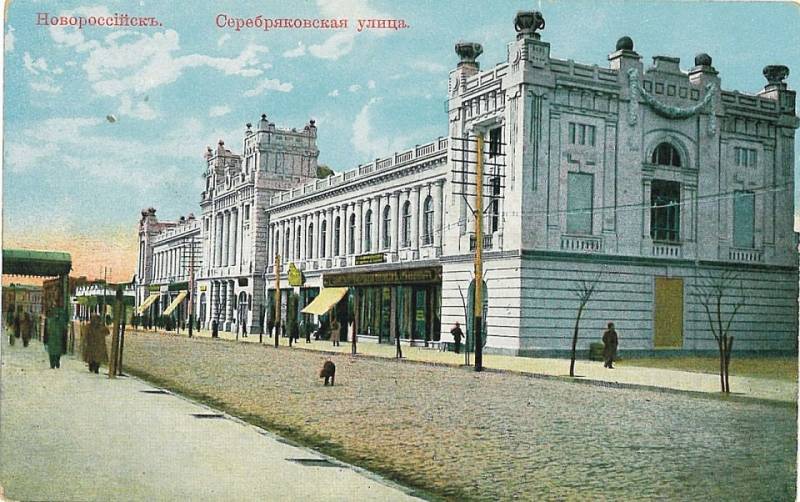 Palace of Pioneers of Novorossiysk

Decades later, one of Gleb’s comrades, Georgy Maystrenko, a veteran of the Great Patriotic War and a Hero of Socialist Labor, recalled:
“I studied with Gleb in an aircraft modeling circle. I remember how he made a rocket model, which is almost completely similar to modern two-keel Su-type fighter jets. That was his foresight. ”

Having no access to foreign experience, by the 1940 year, the Novorossiysk team was able to independently develop and implement in metal one of the first flying jet aircraft models. It was an absolute innovation. In August of the 1940, the Novorossiysk went to the 14-th All-Union competition of flying aircraft models in Konstantinovka, where they made a splash, setting a number of records.

The rocket model of Vladimir Nogaitsev lasted in the air for 1 minutes 32 seconds. And the rocket fuselage model of Gleb Tereshchenko was able not only to exceed the speed of 40 m / s, but also to fly completely out of sight. By the way, in the end, after many hours of searching, she was never found. 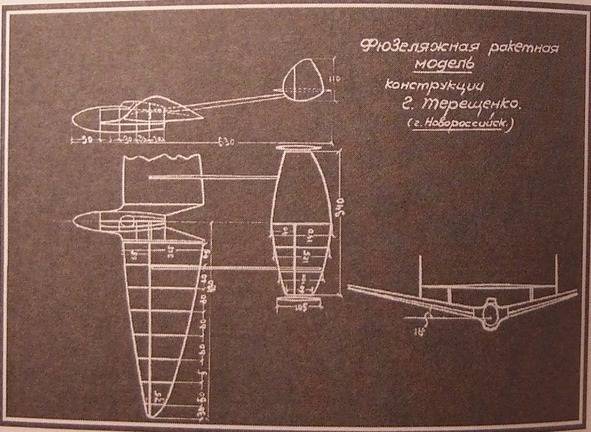 One of the original reactive models of Tereshchenko

In those competitions, the Novorossiysk got the nickname "rocketeers." Their tent has become a kind of base for all enthusiasts of jet technology. They flocked to get background information, to exchange experiences and just out of curiosity. Colonel, a scientist in the design of aerospace systems, doctor of technical sciences, professor, and in the 30's, Oleg Aleksandrovich Chembrovsky, a member of the Moscow aircraft modeling club, recalled that in Moscow the name Tereshchenko began to sound loud after those competitions.

As a result, the organizing committee recommended that the Novorossiysk Laboratory prepare for publication a collection of articles on author's solutions to constructive issues in jet aircraft construction, but the collection, planned for the 1941 year, did not take place for well-known reasons. At the beginning of the fateful 1941, in one of the articles, Tereshchenko confidently wrote:
“Rockets are the engines of the future, and rocket flight is the problem of flying into world space.”


The dawn of the space age seemed on the verge. Having returned with success, the Novorossiysk laboratory began to create a full-fledged liquid fuel jet engine. The number of drawings and diagrams was expanding, experimental launches became commonplace, but the war broke everything.

The tragedy of the Novorossiysk missile

The Great Patriotic War will be a bloody ax on the fate of the Novorossiysk missile. Almost all of them will die in the crucible of that war. Konstantin Mikhailov, already enrolled in the Moscow Aviation Institute, will volunteer for the militia. He will die in the defense of the capital.

Frida Gromova, who designed the first jet engine models, will leave the city after the evacuated flying club. During the crossing in the region of Ust-Labinsk, she will fall under the Nazi bombing. A very young girl will die under the bombs.

In the 1941 year, Tereshchenko himself will volunteer for the front. Until the 1943 year, Gleb will fight in the vast Kuban. His life will end in February 43 when liberating the Krasnodar Territory. During the battles in the area of ​​the farms, the Greeks and the Grechanaya beam Gleb, after an unsuccessful attack by German positions, will be seriously injured and die from blood loss. He will be buried there, in a mass grave. 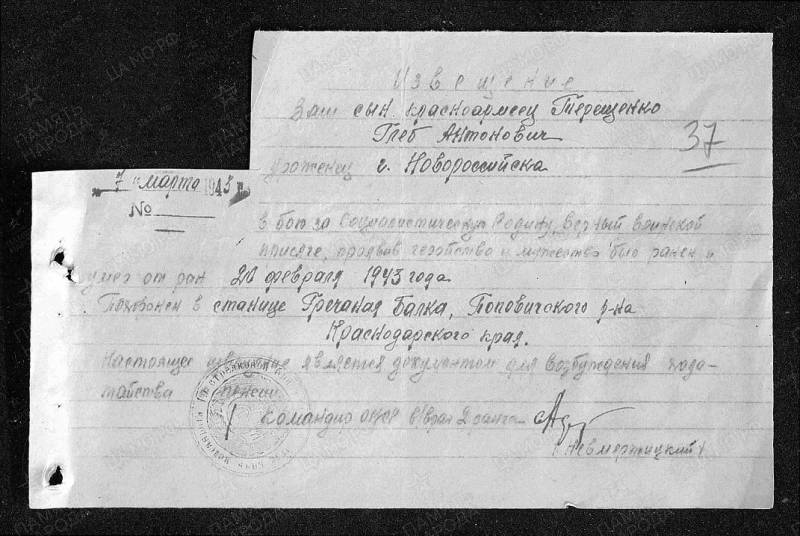 Nowadays, few people know about the daring jet take-off of the team of Novorossiysk missile launchers, before which the doors of the best institutes were opened. However, the war not only mowed down the ranks of the Tereshchenkov team, but almost buried their works and memory of them. After the complete liberation of Novorossiysk, the capital demanded of the surviving Novorossiysk returning home only one thing: the factories and the port must earn at all costs. Nobody wanted to think about any research of young scientists of the pre-war laboratory.

For the first time, enthusiasts of jet technology were remembered only in the 1977 year. In October of that year, the scientific and practical conference “40 Years of the Air Rocket Laboratory of the Novorossiysk Palace of Pioneers” was held in Novorossiysk, in which academicians of the USSR Academy of Sciences and the first rocket scientists took part. As it turned out, metropolitan scientists were familiar with the works of Tereshchenko quite well and regarded his research as serious scientific research. Moreover, venerable Soviet experts concluded that the drawings, photographs, and technical notes of the new Russian pre-war teenagers are still relevant today. Too many bold and original decisions were in the works of Tereshchenko and his team. For example, they noted the original design of a controlled stabilizer on one of the jet aircraft models. 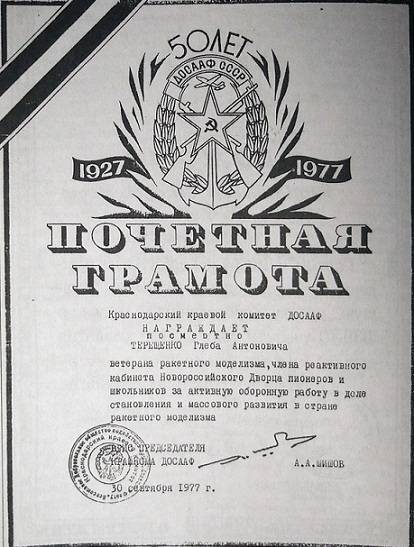 Later several times история Novorossiysk missile regained its life again. But alas, despite the recommendations to publish the works of children who are still of scientific interest, it did not go further, which, in my opinion, is unfair. After all, the contribution of the New Russians to the dawn of the space age was, although modest, but it was.

Ctrl Enter
Noticed a mistake Highlight text and press. Ctrl + Enter
We are
The story of one inventor. Gleb KotelnikovFather told
43 comments
Information
Dear reader, to leave comments on the publication, you must to register.