From the history of chemical weapons 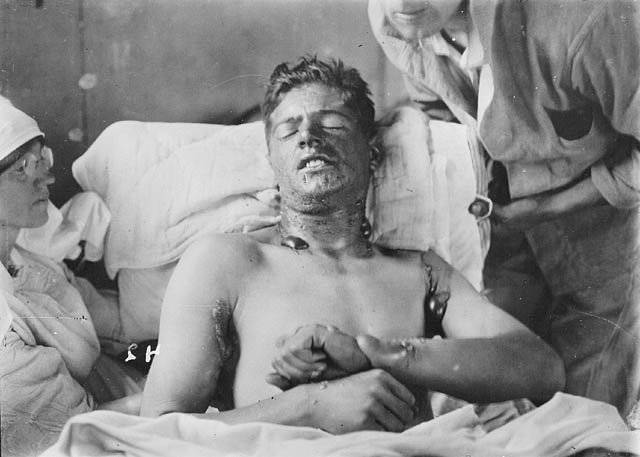 On the night of 12 on 13 July 1917, the German army for the first time used World War I poison gas mustard gas (a liquid blister agent). The Germans used mines, which contained oily liquid, as a carrier of a poisonous substance. This event took place under the Belgian city of Ypres. The German command was planning this attack to disrupt the offensive of the Anglo-French troops. When first applying mustard gas, lesions of varying severity were obtained by 2490 servicemen, of whom 87 died. British scientists quickly deciphered the formula for this agent. However, the production of a new toxic substance was launched only in 1918 year. As a result, the Entente managed to use mustard for military purposes only in September of 1918 (for 2 a month before the armistice).

Mustard has a clearly pronounced local effect: the organic agent affects the organs of vision and respiration, the skin and the gastrointestinal tract. The substance, being absorbed into the blood, poisons the entire body. Mustard affects the skin of a person when exposed, both in the drip and in the vapor state. The usual summer and winter uniforms of the soldier did not protect from the effects of mustard, as well as almost all types of civilian clothes.

Ordinary summer and winter army uniforms do not protect the skin from drops and mustard vapor, like almost any type of civilian clothing. There was no complete protection of soldiers against mustard gas in those years, so its use on the battlefield was effective until the very end of the war. The First World War was even called the “Chemists' War”, since neither before nor after this war, agents were used in such quantities as in 1915-1918. During this war, the fighting armies used 12 thousand tons of mustard gas, they were hit up to 400 thousand people. Over the years of the First World War, more than 150 thousand tons of toxic substances (irritant and tear gases, blister skin agents) were produced. The leader in the application of chemical agents was the German Empire, which has a first-class chemical industry. Total in Germany produced more than 69 thousand tons of toxic substances. Germany was followed by France (37,3 thousand tons), Great Britain (25,4 thousand tons), USA (5,7 thousand tons), Austria-Hungary (5,5 thousand), Italy (4,2 thousand tons) and Russia (3,7 thousand tons ).

"Attack of the Dead". The Russian army suffered the largest losses among all participants in the war from exposure to agents. The German army was the first to use poison gases like weapon mass destruction on a large scale during the First World War against Russia. 6 August 1915, the German command used agents to destroy the garrison of the Osovets fortress. The Germans deployed 30 gas batteries, several thousand cylinders and 6 in August at 4 in the morning a dark-green fog of chlorine-bromine mixture flowed to the Russian fortifications, reaching the positions in 5-10 minutes. The gas wave 12-15 m in height and width up to 8 km penetrated to a depth of 20 km. There were no defenses for the defenders of the Russian fortress. All living things were poisoned.

Following the gas wave and the fire shaft (German artillery opened massive fire), the Landwehr battalions of 14 (about 7 thousand infantrymen) advanced on the offensive. After the gas attack and the artillery strike, no more than a company of half-dead soldiers poisoned by agents of war remained on the advanced Russian positions. It seemed that Osovets was already in German hands. However, the Russian warriors showed another miracle. When the German chains approached the trenches, they were attacked by Russian infantry. It was a real "attack of the dead", the spectacle was terrible: the Russian soldiers went to the bayonet with their faces wrapped in rags, shaking from a terrible cough, literally spitting out pieces of the lungs on the bloody outfit. It was only a few dozen fighters - the remnants of the 13 th company of the 226 th Infantry Regiment of Zemlyansky. The German infantry fell into such horror that it could not withstand the blow and ran. The fleeing enemy opened fire on Russian batteries, which, it seemed, had already died. It should be noted that the defense of the Osovets Fortress is one of the brightest, heroic pages of the First World War. The fortress, despite the brutal shelling of heavy guns and storming the German infantry, was held from September 1914 of the year to 22 of August 1915 of the year.

In the prewar period, the Russian Empire was the leader in the field of various “peace initiatives”. Therefore, she did not have in her arsenals the weapons, the means of countering such types of weapons, did not conduct serious research in this direction. In 1915, the Chemical Committee was urgently established and the emergency question raised was about the development of technologies and large-scale production of toxic substances. In February, the 1916 of the year at Tomsk University by the efforts of local scientists organized the production of hydrocyanic acid. By the end of 1916, production was organized in the European part of the empire, and the problem was generally resolved. By April 1917, the industry had produced hundreds of tons of toxic substances. However, they remained unclaimed in warehouses.

1-th Hague Conference 1899 of the year, which was convened at the initiative of Russia, adopted a declaration on the non-use of projectiles that distribute choking or harmful gases. However, during the First World War, this document did not prevent the great powers from using chemical weapons, including in large numbers.

In August, the French were the first to use tear irritant 1914 (they did not cause death). The carriers were grenades filled with tear gas (ethyl bromoacetate). Soon his reserves ran out, and the French army began to use chloroacetone. In October, 1914 was used by German troops to use artillery shells, partially filled with chemical irritants, against the British positions on Neu-Chapelle. However, the concentration of agents was so small that the result was barely noticeable.

22 April 1915, the German army used agents against the French, spraying 168 tons of chlorine near the r. Ypres. Entente powers immediately declared that Berlin had violated the principles of international law, but the German government dismissed this accusation. The Germans said that the Hague Convention prohibits only the use of shells with agents, but not gases. After that, chlorine attacks were used regularly. In 1915, French chemists synthesized phosgene (colorless gas). It has become a more effective chemical agent, with greater toxicity than chlorine. Phosgene was used in pure form and mixed with chlorine to increase gas mobility.