In Germany, there was a shooting near the synagogue

October 9 2019
49
In the eastern German city of Galle, a synagogue was opened fire. Bild reported that the shooting took place in front of the synagogue and that there were casualties. 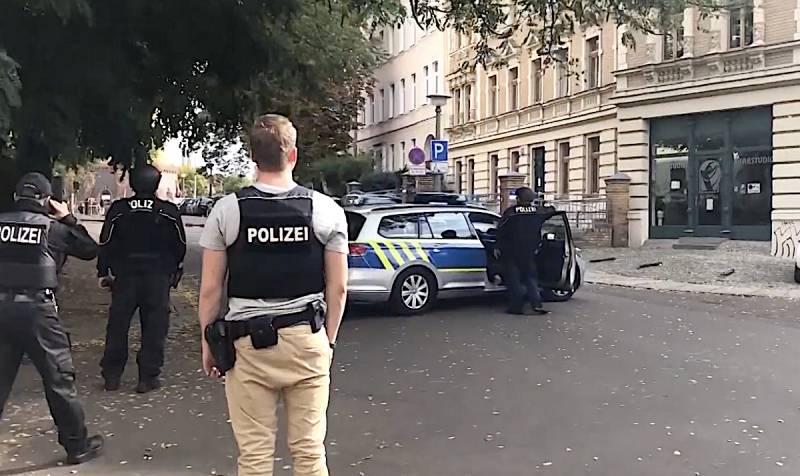 German police said it was looking for suspects who appeared to have fired at a synagogue from an automatic weapons and threw a grenade toward the Jewish cemetery.

According to preliminary data, two people were killed in Galle. Several shots were fired. Alleged criminals hid in a vehicle. They are being searched, we ask citizens to stay in their homes.
- Local law enforcement reports on Twitter.

Bild claims that a taxi driver and his wife, who refused to take the criminals, were injured during the incident. It is also known that at the moment the criminals have left the vehicle and are walking. Later, it was reported that one of the suspects was detained.

It also became known about the shooting that occurred in the German city of Landsberg: it is located 15 km from Halle. The frames below are from there.

Today, Jews celebrate the doomsday, Yom Kippur. It is the holiest day of the year in Judaism, when Jews observe more than 24 hours in search of redemption, and on these dates Jewish houses of worship are usually filled.

We have no evidence so far that the shots at Halle are related to a raid.
- said management representatives.

We are in Yandex Zen
Summary of the week from voenkor Mag about events in the DNI and LC 21.04.18 - 27.04.18
Reports from the militia of New Russia for 27-28 September 2014 of the year
49 comments
Information
Dear reader, to leave comments on the publication, you must to register.