October 9 2019
27
US President Donald Trump has threatened Turkey, threatening to completely destroy the Turkish economy if Ankara "does something." These words were heard by the American president before the start of the Turkish military operation against the Kurds in northern Syria. 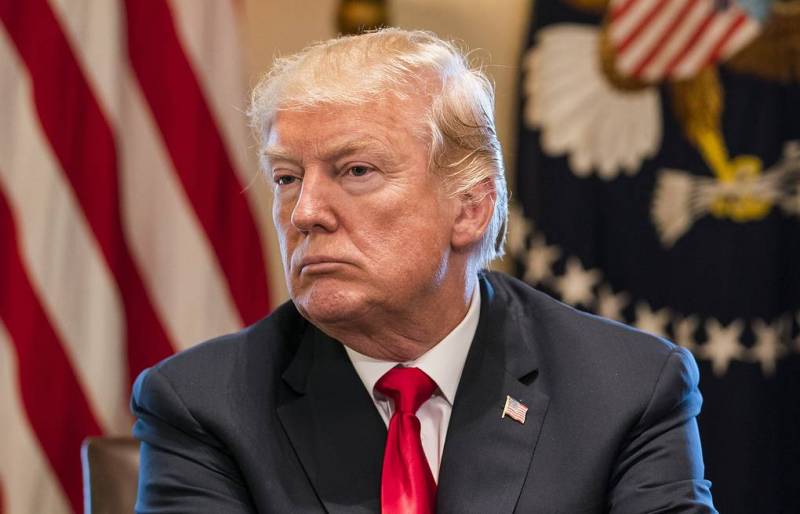 The current owner of the White House is known throughout the world as an emotional and shocking person who does not skimp on harsh statements. If something does not go as Trump would like, he will easily allow himself to swear and threaten. So it happened this time. The anger of the American president caused Turkey, preparing for military action against the Syrian Kurds. On the eve of the military operation announced by the Turkish leadership, Donald Trump made a very harsh statement.

I already stated earlier, and simply repeat: if Turkey does something that I, in my great and unsurpassed wisdom, consider unacceptable, I will completely ruin and destroy the Turkish economy (I already did this before!),
- Trump wrote on his Twitter page.

The American president also emphasized that Turkey, together with European countries, should monitor the captured terrorists of terrorist organizations, and did not forget to recall that the United States allegedly made the biggest contribution to the fight against ISIS (banned in the Russian Federation). Now, according to Trump, it is the turn of other countries to fight terrorism in the region.

The last statement, by the way, was for no one news. Donald Trump has repeatedly stated his intention to withdraw US troops from Syria. Attributing the victory over the Syrian terrorist groups to the Americans, in reality, Trump is guided by considerations of financial savings. He believes that Washington should spend money not on wars in Afghanistan, Syria, Iraq or Libya, but on the development of internal infrastructure and the general increase in the capabilities of the American armed forces.

Of course, they disagree with Trump at the Pentagon, where they receive money specifically for waging wars, but in this context the position of American generals is less important. Trump emphasized in his speech that he was aggressive towards Turkey’s former most important US ally in the Middle East. 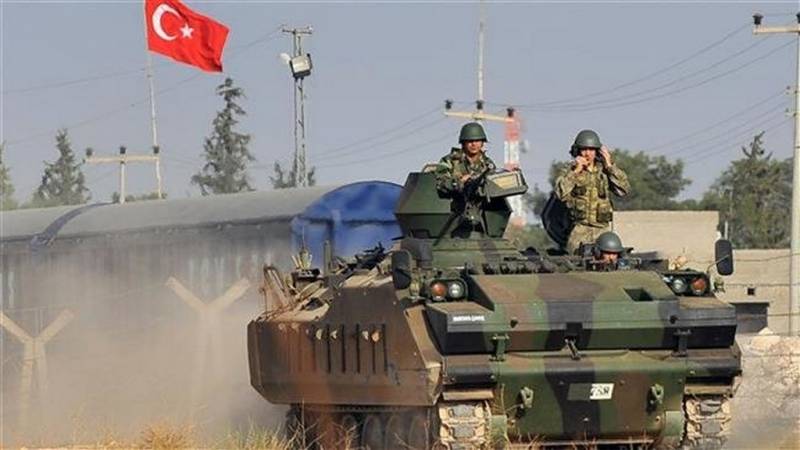 US in words against the operation, in fact, Turkey's hands have been untied

From the end of the 1940's and the beginning of the 1950's, Turkey played a key role in the military-political plans of the American leadership. Then Turkey bordered on the Soviet Union and was of great military interest to the Americans.

First, the American army could use Turkish airfields and military bases, deploy missiles aimed at the southern cities of the Soviet Union.

Secondly, from the territory of Turkey it was very convenient to conduct reconnaissance and sabotage activities against the USSR, as well as against Syria, Iraq, and, after the Islamic revolution, Iran.

To date, Turkey has the second largest military force in NATO after the United States. And the American leadership, until recently, preferred to reckon with Turkey. For at least decades, Washington has turned a blind eye to any human rights violations in Turkey, whether it be the Kurdish issue or the presence of tens of thousands of political prisoners - communists and socialists.

But with the advent of an ambitious and claiming an independent role in Middle East and even world politics Recep Erdogan, the situation began to change. The Turkish president is now considered to be a “neo-Ottomanist” in the West, emphasizing that he would like to restore the former power of the Ottoman Empire and therefore intervenes in the affairs of those countries that were formerly part of this empire and, above all, Iraq, Syria and Libya as the least stable in politically and, therefore, weaker countries.

A major blow to US-Turkish relations was US support for Syrian Kurds. For Ankara there is nothing worse than the Kurdish national movement encroaching on the territorial integrity of Turkey, and Erdogan has repeatedly threatened to end the Kurdish rebels in Syria forever. By the way, he calls them exclusively terrorists and accuses Washington of supporting terrorist groups. But for the United States, Syrian Kurds are an important ally in the fight against Bashar al-Assad and, in addition, a promising force for reformatting the entire political map of the Middle East (a Kurdish state can become a counterbalance to Arab countries, Iran and Turkey). 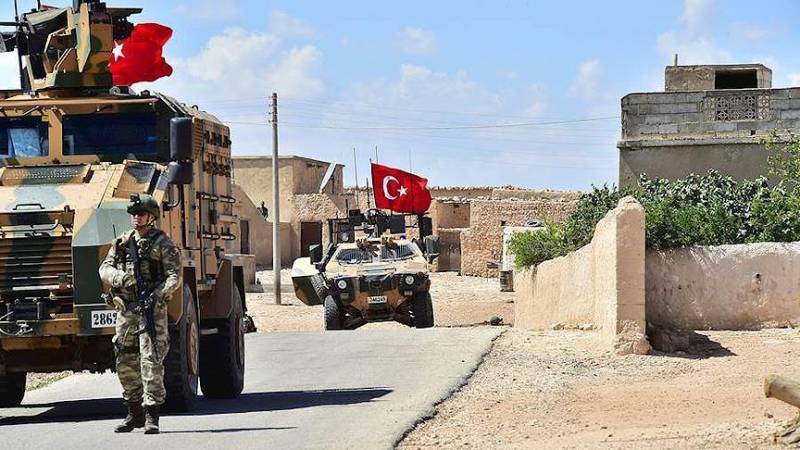 Washington understands that the Turkish armed forces, being powerful and well trained, can, if not completely destroy the Kurdish formations in northern Syria, then at least deliver serious blows to them that will weaken the Syrian Kurds as much as possible. And the Turkish military operation, therefore, is seen as a direct obstacle to the implementation of the American strategy in Syria.

At the same time, the United States did not want to enter into an open confrontation with Turkey. Therefore, in Syria, the withdrawal of American troops began from the positions that they occupied in the north of the country. The withdrawal of US units coincided with the military operation launched by Turkey against the Syrian Democratic Forces - the Arab-Kurdish coalition operating in the north of the country.

At the same time, the Americans refused to support the Turkish military operation “against terrorists,” but Recep Erdogan, in fact, had no doubt that Washington would not participate in the hostilities on the side of Ankara. The main task of Turkey was to ensure that the Americans did not interfere with the operation against the Kurds. And Erdogan was able to do this task.

Thus, in fact, the United States made a very large concession to Ankara, deciding to withdraw troops. If the Americans had not begun to leave the north of Syria, Turkey would hardly have been able to begin a full-fledged military operation. After all, there would be a very great risk of engaging in combat contact with American units. Now this problem is resolved. And the Turkish army began to act, having received clear evidence of non-interference in the conflict by the United States.

On 7 on October 2019, the Turkish Air Force attacked the headquarters of the Syrian Democratic Forces in the city of Al-Malikiya in the northeast Syrian province of Hasek. Then Turkish army artillery began shelling the positions of the Kurds in the province of Raqqa.

The Turkish Air Force also launched attacks on the Syrian-Iraqi border, as they are concerned about the possibility of sending reinforcements to the Syrian Kurds from their fellow tribesmen in neighboring Iraq. A missile bomb was struck in the vicinity of the border crossing in Samalik on the Syrian-Iraqi border. And this, apparently, is not the last blows from the Turkish armed forces.

Erdogan says the main task of the Turkish army is to create a buffer zone on the Syrian-Turkish border, where up to two million Syrian refugees could be accommodated. Turkey also needs this buffer zone in order to break the contacts of Syrian and Turkish Kurds. The latter, after all, get weapon and militants from Syrian Kurdistan, which the Turkish leadership really dislikes.

The withdrawal of American troops from Northern Syria was not a surprise to the Syrian democratic forces, but it surprised them very unpleasantly. SDS spokesman Mustafa Bali attacked the United States with allegations of failure to fulfill obligations to the Arab-Kurdish coalition. At the same time, he called on all the inhabitants of the region to protect him from the Turkish invasion. 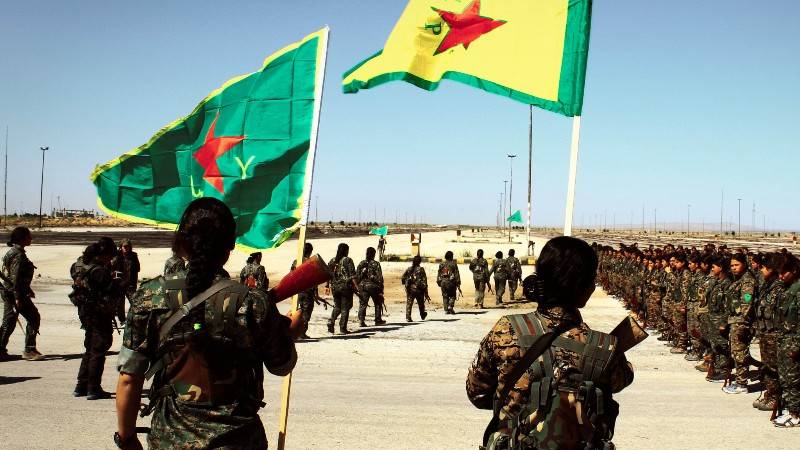 Syrian democratic forces are determined. What-what, but the Kurds have always been able to fight, and in recent years they have become so serious in military matters. In addition, the Kurds have enough weapons, although, of course, not on such a scale as to compete with the Turkish army. Finally, on the side of the Kurds is public opinion in Europe.

But in this situation, the views of both Turkey and the Kurds turned to Russia. Ten years ago, Moscow was considered the main patron of the Turkish Kurds, whose representatives regularly visited Russia. However, at one time, the Russians allowed the arrest of the leader and symbol of the Kurdish resistance Abdullah Ocalan, which somewhat pushed the Kurdish revolutionaries from Russia. And good relations between Putin and Erdogan did not contribute to the development of contacts with the Kurdish opposition.

When a Russian plane was shot down in the sky over Syria and Russia imposed sanctions against Turkey, Moscow again made a friendly gesture towards the Kurds. The leader of the Democratic Party of the Peoples of Turkey Selahattin Demirtash paid a visit to Moscow. Then relations with Ankara improved and, accordingly, Moscow now refrains from flirting with the Kurds. But this does not mean that Russia will turn a blind eye to the Turkish-Kurdish conflict in northern Syria.

Moscow has its own and well-known position throughout the world. The Russian leadership is in favor of maintaining the territorial integrity of Syria within its former borders. What does this mean? And this means that Russia can oppose Ankara’s policies, but only if the Syrian Kurds agree to reconcile with Bashar al-Assad. Sergey Lavrov noted that the United States is trying to split Syria by putting it on the “Kurdish map”, but Russia advocates a normal and constructive dialogue between representatives of the Kurds and the Syrian authorities.

If now the Kurds decide to take the side of Assad, then the following results will be achieved. Firstly, the whole true meaning of the American military operation in Syria will be crossed out - the anti-Assad Syrian democratic forces will agree with Damascus and stop confronting it. Secondly, Turkey will have to immediately withdraw its troops from the territory of a sovereign state, otherwise its actions will already be seen as aggression against Damascus, supported by Moscow and Tehran.

By the way, the leader of the Democratic Party of Kurdistan in Iraq, Masood Barzani, the former president of Iraqi Kurdistan, asked Russian Foreign Minister Sergei Lavrov to intervene in the situation and protect the Syrian Kurds from Turkey. Indeed, after the withdrawal of US troops from the region, Russia remains the largest force capable of reconciling the parties. Moreover, our country now has good relations with Ankara, good relations with Tehran and Damascus, and communication with the Kurds can also be established from old times.

But what about the hysterical statement of Donald trump against Ankara? And it will remain a "concussion." Trump could not but react to the actions of the Turks in Northern Syria, because otherwise he would have shown the whole world how America is "throwing" its allies - the Kurds and the Arab opposition.

But, intimidating Turkey with the destruction of the economy, Trump did not pursue any serious goal. Moreover, it is the Americans who really created all the conditions for the Turkish military operation in northern Syria, withdrawing their troops from the region.

We are in Yandex Zen
Situational analysis of the death of the MH17 flight (Malaysian Boeing 777), made on the basis of engineering analysis from 15.08.2014
Results of the week. “In our cooperative, the board is always agreed”
27 comments
Information
Dear reader, to leave comments on the publication, you must to register.