Polish predator. Why Moscow saw a threat in Warsaw on the eve of World War II

10 September 2019
33
Poland was considered by the Soviet military as one of the main threats to the USSR before World War II, unique declassified archival materials published by the Russian Defense Ministry report this. 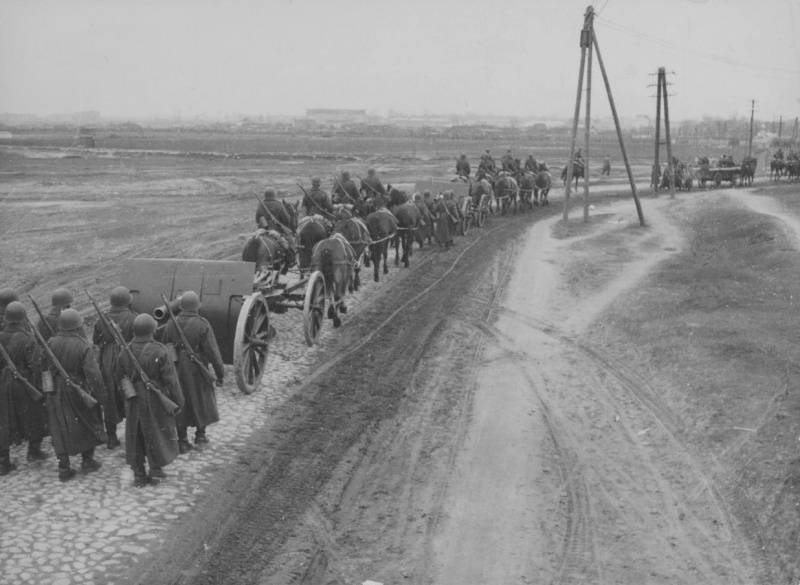 A column of Polish artillerymen with 105-mm Schneider cannons of the 1913 model of the year makes a march along a country road. 1939

Ministry of Defense on its website has opened The new multimedia portal “Fragile Peace on the Threshold of War”, which is dedicated to the situation on the threshold and the initial period of the Second World War. Among the documents made public is a memo from the chief of the General Staff of the Red Army Boris Shaposhnikov to the People’s Commissar of Defense of the USSR, Kliment Voroshilov, dated March 24 1938. The document notes the threat of the possibility of war on the Western Front against Germany and Poland, as well as Italy, with the possible accession of the Limitrophs (Finland, Estonia, Latvia and Romania). In the East, there was a threat from Japan.

The chief of the General Staff of the Red Army, Shaposhnikov, noted that the emerging political situation in Europe and the Far East "as the most likely opponents of the USSR puts forward the fascist bloc - Germany, Italy, supported by Japan and Poland." These countries set their political goal of bringing relations with the Soviet Union to an armed clash.

However, at this time, Germany and Italy have not yet secured a quiet rear in Europe, and Japan is bound by the war in China. “Poland is in the orbit of the fascist bloc, trying to maintain the apparent independence of its foreign policy,” writes Shaposhnikov. The hesitant stance of England and France allows the fascist bloc to come to terms with Western democracies in the event of its war with the USSR and direct most of the forces against the Union. The same policies of England and France determine the position of Finland, Estonia, Latvia, Romania, as well as Turkey and Bulgaria. It is possible that these states will remain neutral by waiting for the result of the first battles, which does not exclude the possibility of their direct participation in the war on the side of the fascist bloc. Lithuania will be occupied by Germans and Poles in the very first days of the war. Turkey and Bulgaria, even maintaining neutrality, will allow fleets Germany and Italy operate in the Black Sea. Turkey may oppose the USSR in the Caucasus.

In the Far East, Japan, on the one hand, is weakened by the use of human and material resources in the war with China and the use of part of the divisions to control the occupied territories. On the other hand, the Japanese empire has already mobilized an army, which it calmly, without interference, transferred to the mainland. At the same time, the Japanese continue to arm themselves intensely. Therefore, in the event of a war in Europe (Nazi bloc attacks on the USSR), Japan may attack the USSR, as this will be the most favorable moment for Tokyo. In the future, such a favorable situation in the Far East will no longer be.

Thus, the chief of the General Staff of the USSR Shaposhnikov made a completely correct alignment of the future world war. The Soviet Union had to prepare for war on two fronts - in Europe and the Far East. In Europe, the main threat came from Germany and Poland, partly Italy and the state-limitrophs, in the Far East - from the Japanese Empire.

The General Staff gave an analysis of the possible deployment of the enemy. On the Western Front, Germany and Poland could concentrate their main forces north or south of Polesie. This question was related to the situation in Europe and whether the Germans and Poles can agree on the Ukrainian issue (as a result, they did not agree, and Germany “ate” Poland). Germans and Poles occupied Lithuania. The Germans used Latvia, Estonia and Finland to attack the northern strategic direction. German troops in the north, and armies of the Baltic states were used for a concentric attack on Leningrad and cutting off the Leningrad region from the rest of the USSR. In the North Sea, cruising operations of the German fleet and blockade with the help of the submarine fleet of Murmansk and Arkhangelsk are possible. In the Baltic, the Germans will try to establish their dominance, as in the Black Sea, with the help of the Italian fleet.

In the Far East, judging by the construction of railways, one should expect the main blow of the Japanese army in the Primorsky and Iman directions, as well as in Blagoveshchensk. Part of the Japanese forces will attack in Mongolia. In addition, under the dominance of a strong Japanese fleet at sea, private landing operations are possible both on the mainland and Kamchatka and the development of an operation to capture all of Sakhalin.

Now a myth is created about an innocent Polish victim who suffered from the aggression of the Third Reich and the USSR. However, in reality, the situation was the opposite. The Second Polish-Lithuanian Commonwealth (Polish Republic in 1918-1939) was itself a predator. The USSR is perceived as a great power, the victor of Hitler. But in the 1920-1930 years the situation was different. Poland defeated Soviet Russia in the 1919-1921 war. Captured the West Russian region. Warsaw also made money at the expense of the deceased Second Reich. Thus, according to the results of the First World War, the Russian and German empires collapsed, sharply weakened militarily and economically. Germany was forced to limit its military potential to a minimum. Poland became the most powerful military power in Eastern Europe.

The Soviet Union, weakened to the limit by the Civil War and intervention, economic disruption, all this time was forced to reckon with the Polish threat on its western borders. After all, Warsaw cherished plans for creating “Greater Poland” from sea to sea - from the Baltic to the Black Sea, the restoration of the Commonwealth within the borders of the year 1772, with the capture of Lithuania and the Soviet Ukrainian Republic.

At the same time, from the 1920's, Polish politicians began to create the image of Poland in the West as a barrier to Bolshevism. So, in 1921, an alliance agreement was signed with France. At that time, Warsaw hoped that the West would again go on a “crusade” against “red” Russia, and Poland would take advantage of this to capture Ukraine. Only later, when the Nazis seized power in Germany in 1933, did the Polish nationalists see an ally in Hitler. The Polish lords now hoped that Hitler would attack Russia, and Poland would use this war to realize its aggressive plans in the east. Under these plans there were real reasons - the Poles managed to profit at the expense of Czechoslovakia, when Hitler was able to convince England and France to give him the opportunity to dismember the Czechoslovak Republic.

Thus, the Polish elite could not give the country any economic, social reform or prosperity in the 20-30 years. At the same time, the Poles pursued a policy of colonization on the lands of occupied Western Belarus, Galicia and Volyn. The most effective way to colonize social discontent was the image of the enemy - the Russians, the Bolsheviks. And the old slogan “From mozh to mozh” (“from sea to sea”) remained the most effective. In addition, the Poles had territorial claims against other neighbors. Warsaw wanted to capture Danzig, which was inhabited by the Germans and belonged to Prussia for several centuries, but by the will of the Entente became a “free city”. The Poles repeatedly organized military and economic provocations in order to provoke a solution to the Danzig issue. Polish politicians openly demanded further expansion at the expense of Germany - annexation of East Prussia and Silesia to Poland. Warsaw considered Lithuania to be part of its state, had territorial claims against Czechoslovakia.

This explains Poland’s entire foreign policy during these years and its oddities, when Warsaw itself went to suicide, rejecting all Moscow’s attempts to find a common language, to create a collective security system in Eastern Europe. In 1932, Poland concluded a nonaggression pact with the USSR, in 1934, with Germany. But in the documents there was not a word about the borders of Poland. Warsaw wanted a new big war in Europe. The First World War returned to Poland statehood, ethnic Polish lands and part of the West Russian territory (Western Belarus and Ukraine). Now the Polish elite was hoping that a new big war would give Poland the new territories it claimed. Therefore, Poland in the 1930-ies tried with all its might to foment a great war, was a predator who wanted to profit at someone else's expense, and not an innocent sheep. In September 1939, Warsaw reaped the fruits of its aggressive policy.

Due to its military-economic potential, Poland could not become the main aggressor in Europe, but Jozef Pilsudski (the head of Poland in the 1926-1935, actually a dictator) was no worse and no better than the same Mussolini or Mannerheim in Italy and Finland. Mussolini dreamed of restoring the Roman Empire, making the Mediterranean Sea Italian, Mannerheim - of "Great Finland" with Russian Karelia, the Kola Peninsula, the Leningrad, Vologda and Arkhangelsk regions. Pilsudski and his heirs are about “Great Poland”, mainly due to Russian lands. The only question is that the Japanese, Italians and Germans at first managed to create their empires, and the Poles were stopped at the very beginning. Therefore, the Polish lords decided to sign up as victims of the aggressors.

In the USSR, in the 20-30 years, they were well aware of the Polish threat. The memory of this was gradually erased only after the victory of 1945, when the Poles from the enemies became allies, and Poland became part of the socialist camp. Then behind the scenes decided not to stir up the bloody past. In the first years after the Riga peace of 1921, the Polish border was military: there were constantly clashes, skirmishes thundered. On the territory of Poland, various White Guard and Petliura gangs were quietly located, which, with the complicity of the Polish military, periodically invaded Soviet Belarus and Ukraine. This situation is perfectly shown in the Soviet feature film "State Border" 1980 - 1988. (second film) - “Peaceful Summer of the 21 Year”. Here, the Soviet border town is attacked by bandits dressed in a Red Army uniform, behind whom are Polish intelligence and white emigrants.

This forced Moscow to hold large military forces on the border with Poland, not counting the NKVD troops and border guards. It is clear that therefore, in the 20 and 30 years, Poland was considered a probable adversary in Moscow. This is confirmed by the report of Shaposhnikov from March 24 1938 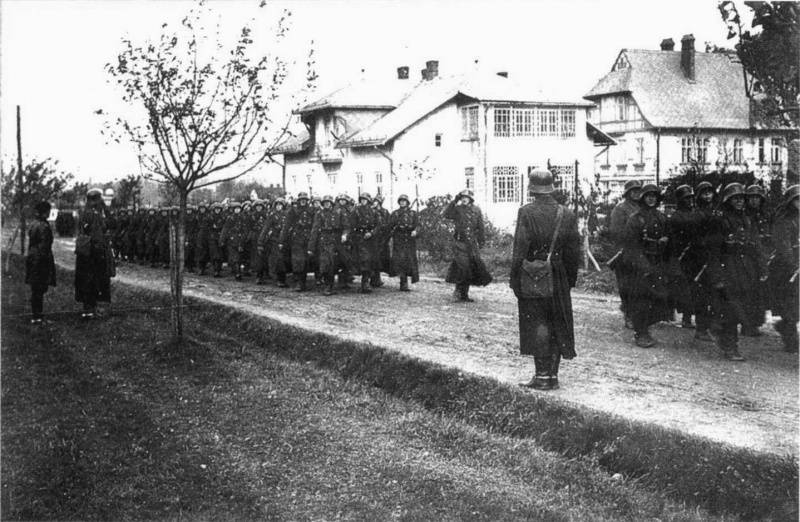 Units of the Polish 10-th horse-rifle regiment of the 10-th mechanized brigade are preparing for the solemn parade in front of the regiment commander over the end of Operation Zaluzhie (occupation of Czechoslovak territories). Source: http://waralbum.ru

Ctrl Enter
Noticed oshЫbku Highlight text and press. Ctrl + Enter
We are
Diplomats of the People's Commissariat of Defense: on the eve and during the warMolotov-Ribbentrop Pact - the policy of pragmatism
33 comments
Information
Dear reader, to leave comments on the publication, you must to register.