4 September 2019
46
The Ministry of Defense until the end of the year will receive the first batch of sanitary armored vehicles "Lens", created on the basis of the armored car "Typhoon-K". About this in an interview with RIA News"said Igor Zarakhovich, chief designer of the Remdiesel development company. 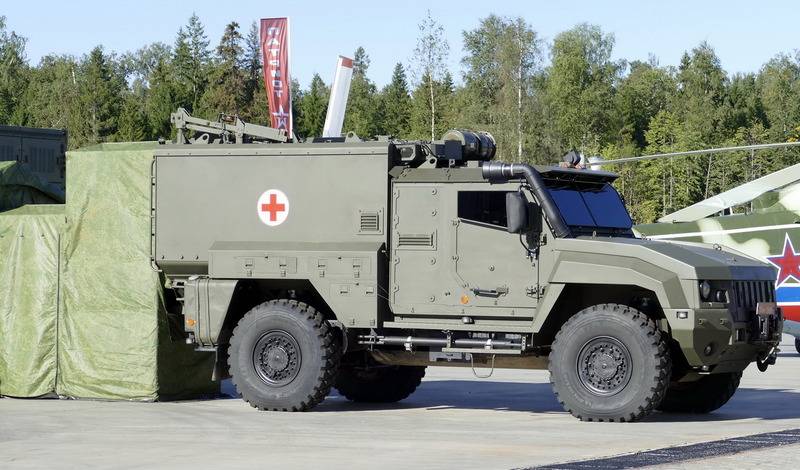 The first sanitary Lens armored vehicles will be delivered to the Russian Armed Forces before the end of this year. The armored car has already passed the entire cycle of state tests and is preparing for serial production. It was created on the chassis "Typhoon-K" 4X4, unlike the original version, the ambulance armored car has a double cabin and a sanitary compartment, allowing the wounded to be evacuated from the battlefield. The capacity of the compartment is four people lying down, or six people in a sitting position. A combined variant of transporting the wounded is possible - two lying and three sitting. The machine has a smooth ride and can comfortably deliver the wounded over rough terrain.

The “Lens” has a combined protection of ceramic armor and armor steel, which provides the third class of protection for the hull (protection against shooting weapons, including armor-piercing incendiary bullets). Mine protection can withstand undermining up to 8 kg of TNT under the wheel. At the same time, the destroyed wheel provides up to 50 km of cross-country driving.

The machine is equipped with various medical equipment, including devices for pulling the wounded out of hatches and dragging, shields for evacuation with damage to the spine, etc.

Five armored cameras are installed on the armored car, providing all-round visibility for the crew. It is possible to install a remotely controlled module with a machine gun, which is controlled by the second crew member through the remote control located in the cockpit.