On the verge of a massive conflict. Big Idlib checks Moscow for military-political stamina

August 21 2019
51
A number of significant and extremely alarming operational-tactical events in the area of ​​the so-called “Idlib de-escalation zone” marked the third week of August 2019. In particular, just three weeks after the successful finalization of the 2,5 billionth contract between the Turkish Ministry of Defense and Rosoboronexport for the supply of four anti-aircraft missile systems (2 x anti-aircraft missile regiments) of the S-400 Triumph in the interests of the Turkish Air Force controlled by the General Staff Turkish Armed Forces paramilitary groups "Hayat Tahrir al-Sham", "Islamic Party of Turkestan" and "Tahrir Suria" sharply increased the intensity of artillery attacks on the fortified areas of the Syrian army and its friendly forces. 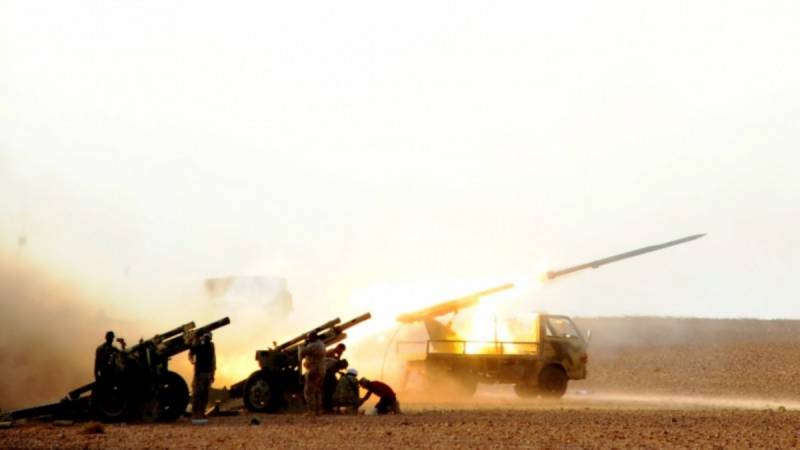 Moreover, as if by magic, the firing work on the military infrastructure at their disposal was resumed aviation operational brigades of the Russian Aerospace Forces deployed at the Khmeimim airbase. The environs of a key Russian air base in Syria began to be subjected to enviable constancy by the BMZ-21 Grad batteries deployed by idlib militants on the dominant heights in the western part of the “de-escalation zone”, which ultimately forced the command of the Russian air forces and the Syrian armed forces to leave the absurd ceasefire agreements and embark on a new phase of the offensive against pro-Turkish militants.

Based on what is happening, we can come to a firm opinion that Mr. Erdogan and the high-ranking representatives from the defense structures supervised by him, having obtained the desired high-tech “buns” in the form of the S-400 long-range air defense systems, and without any fear of disrupting the defense deal, decided continuing to use tough military-political instruments to maintain control over the northwestern provinces of Syria in general and the “Idlib adder in particular.”

And in this case, it would be extremely naive to talk about the absurdity and counterproductiveness of this military-political line of Ankara, because the 5-year period of comprehensive control over the "Idlib Viper" and part of Aleppo governorate eloquently illustrated a huge range of military-political, operational-tactical and economic benefits for the turkish side.

Firstly, it is an opportunity to dictate harsh conditions during numerous “backstage multi-walk-throughs” and “undercover games”, which are an integral part of the summits of the “Astana troika” and other negotiations between the leaders of the Central Asian states, one way or another involved in the formation of a road map to resolve the situation in "Idlib de-escalation zone." Secondly, it is the opportunity to use the territory of the Bolshoi Idlib as an excellent testing ground for testing prototypes and serial prototypes of the advanced weapons of the Turkish defense industry (from jamming communications and tactical information exchange to the T-155 Firtina self-propelled guns, RTR / EW systems) Koral ”and Bayraktar TB2 strike reconnaissance UAV) in close to combat conditions.

And finally, thirdly, the receipt of significant economic dividends consisting in the regular supply to Idlib of tanks with liquefied gas for the domestic needs of the local population and tens of thousands of militants “Khayyat Tahrir al-Sham”, “Tahrir Suriya”, etc. So, according to the Telegram channel Ebaa-Agency, an unspoken contract for the supply of liquefied gas to the Idlib Hadyushnik was signed between the local authorities of one of the Idlib districts and an anonymous Turkish oil and gas company back in March of 2018. Three of the above factors can be considered a fundamental argument in favor of maintaining the presence of regular Turkish army units in Big Idlib.

Meanwhile, talking about the former inviolability of Turkish control over Idlib is no longer necessary. In the course of a rapid two-way offensive throw by the n. Kafr Naboo Umm-Kharyatein in the direction of the city of Khan-Sheikhun, the SAA units (including the elite units of the "Tiger Forces") were able to take control of more than 12 villages and two strategically important dominant heights - Tall As and Wadi al-Davrat. Deployment of Grad MLRS batteries, barreled artillery and ATGM systems equipped with Kornet-E complexes at these heights (and their environs) allowed the Syrian pro-government forces not only to organize fire support for the Tiger Forces that occupied the Sakayuk village, but also establish total fire control of the M5 “Hama - Aleppo” highway, overnight depriving the Turkish Army of the opportunity to carry out the safe rotation of military personnel at observation post No. 9 (near the town of Morek).

The further stage of the SAA offensive operation on Khan Sheikhun made it possible to completely cut off the key Turkish opornik No. 9 and a number of fortified areas "Tahrir al-Sham" and "Jeysh al-Izza" (in the cities of Kafr Zeyt, Morek and El-Latamna) from the vital arteries ”M5, which finally called into question the feasibility of the presence of our Turkish so-called“ colleagues ”in the southern part of Idlib, because this area was in the next tactical“ cauldron ”to be liberated and returned to Damascus control. And here an important question arises: what are the further actions of Ankara?

Based on the loud statement of one of the Turkish officers in Moreka, made on condition of anonymity of 17 on August 2019 and published in the news block of the tactical online map syria.liveuamap, we can conclude that we are talking about another undisguised bluff of Erdogan and senior representatives of the command of the Turkish army, because it announced a firm refusal to leave the Turkish contingent from the 9 observation post even in the case of the worst-case scenario, and also announced a plan for the construction of two more analogs Other strong points between Morek and Mount Shahshbo.

In the context of comprehensive military-technical and operational-tactical support of the SAA units advancing on Khan Sheikhun by the Russian Air Force, as well as the 24-hour ultimatum put forward by Moscow and Damascus demanding the withdrawal of Turkish troops from the Morek region, the above statement of the Turkish officer turns into an absolutely utopian and the suicidal action of Ankara. Moreover, the first warning, consisting of a massive point strike by the Syrian Air Force against a Turkish convoy heading for Khan Sheikhun, was made as early as the morning of August 19. Unfortunately, this extraordinary step did not have the necessary sobering effect on the “hotheads” in the Turkish General Staff, motivated by the myriad imperial ambitions of the higher leadership.

So, by the evening of 19 on August 2019 of the year, according to the same syria.liveuamap.com map, to the area of ​​the border Reykhanli KPVV (Il Khatay, on the border with Bolshoi Idlib), under the strict supervision of reconnaissance UAVs and the cover of multi-role fighters F-16C / D Block 50 +, additional Turkish armored units advanced with the M60T Sabra Mk 1 / 2 MBT and other equipment, while FSA groups arrived from occupied Afrin under cover of night. Therefore, in spite of the expected information about the departure of Turkish troops from the 9 observation post against the background of the cleansing of Khan Sheikhun, the acute phase of the confrontation for control over the rest of Big Idlib will begin in the foreseeable future. Here, everything will depend on Moscow’s readiness to act in spite of the emerging "massive" contracts for the supply of dozens of Su-35С and other types of promising weapons to the Turkish side.