August 14 2019
13
The reason for the destruction of the Indian MiG-21 in the clash with Pakistan in February this year may be due to an outdated communication system and the absence of an jammer. About this writes the portal Indian Defense. 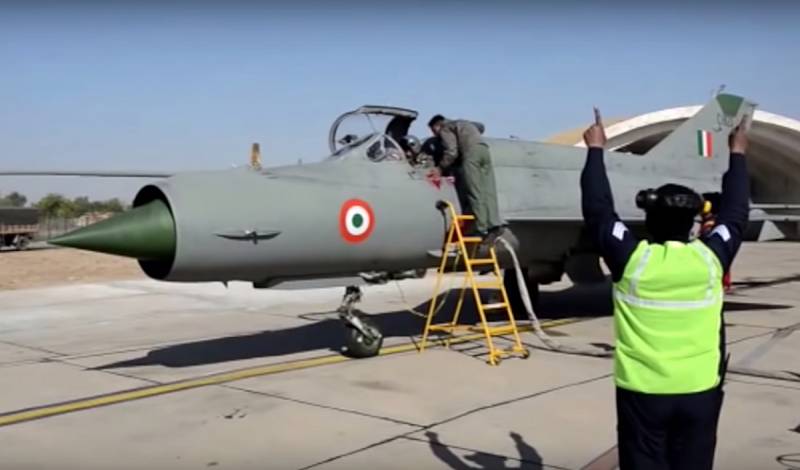 The Indian MiG-21 "Bison", shot down by the Pakistani F-16 during a confrontation on the Kashmir border in February, probably had an outdated communications system that was not equipped with anti-jamming technology. According to sources from the Indian Ministry of Defense, this could be the reason that wing commander Abhinandan Warthaman was shot down by the enemy and captured.

The problem with communications systems in the Indian Air Force (IAF) has been around for years. For the first time, the air forces of the country requested a replacement of systems in the 2005 year. There is a high probability that the pilot of the Indian MiG-21 did not hear the instructions, since his communication channel was blocked by the enemy. Due to this, the fighter could not turn around in time, and fell under attack.

February 27, in response to attacks by the Indian Air Force on a terrorist camp located on the territory controlled by Islamabad, the Pakistan Air Force bombed on targets in India. IAF fighters got involved in the pursuit. At some point, they were ordered to "cool down" - that is, to abandon the pursuit of enemy aircraft. The wing commander Warthaman, as stated, did not hear the order and continued to pursue the Pakistani fighter. The Indian pilot was shot down and captured. The reason is called the interference that Pakistan allegedly created aviation.

For four years, from 2008 to 2012, the country's Ministry of Defense tested new communications systems and, as a result, presented its recommendations to the government. In 2013, at the Halware Airbase in Punjab, senior government officials were shown the options available to highlight the need for this project.

When the government made the decision, the Defense Research and Development Organization (DRDO) and Bharat Electronics Limited (BEL) companies applied for the design, development and local production of these communications systems for the Indian Air Force. Although both companies did manufacture such equipment, they did not meet IAF requirements.

Communication systems produced by DRDO cannot be installed on the aircraft due to their own dimensions, which may require major changes in the design of fighters
- quotes the portal of an anonymous government official.

New equipment must be certified by agencies such as CEMILAC, RCMA, etc. This is a lengthy process, one procedure is a prerequisite for installing communication systems on any Indian aircraft.

Senior officials in the security agencies emphasized that a variant of new communication systems for the Navy is being introduced, while work on a version for the Air Force is ongoing.

Fighters, unlike warships, have very little space. In addition, the equipment must not disturb aerodynamics.
- noted another source of Indian Defense.

The Air Force has repeatedly appealed to the Indian government, asking for permission to buy several sets of advanced communications systems for front-line fighters. In the period from 2014 to 2016, there was no response from New Delhi.

Among other things, objections were expressed regarding the acquisition of anti-jamming technology from foreign manufacturers.
- added a third senior official. Again, on condition of anonymity.

In 2017, the government finally authorized the IAF to purchase communications equipment from international companies. Almost immediately, a $ XMNX million contract was signed for the supply of BNet systems from the Israeli company Rafael. However, the first delivery under this agreement is planned only in the current year. It is noted that the Rafale fighters, which are due to enter the Indian Air Force in the near future, have no such problems.

Our communications systems are outdated compared to our neighbors. I must emphasize that the main delays come from the machine of the bureaucracy, which does not understand how important communication systems can be. Organizations such as DRDOs must also be held accountable, and they must deliver equipment on time.
- emphasized Vice Marshal of Aviation Sunil Ceyvant Nandokar.
Military Reviewin Yandex News
Military Reviewin Yandex Zen
13 comments
Ad