“Petliura is an idealist without any scope”

July 7 2012
131
In May, 2012 was 133, the year since the birth of Simon Petlyura. Hardly in stories Ukraine, there is a more controversial personality. Who was he? Who is he - a paid agent of the Western powers or a fiery patriot, a talented politician, or an ordinary gangster. Some historians describe him as an incorrigible adventurer and careerist, others as a traitor to national interests, and still others as the unofficial head of the criminal circles of Ukraine. Hardly ever we will find out all the answers. History carefully keeps its secrets. However, let us today at least open the veil. 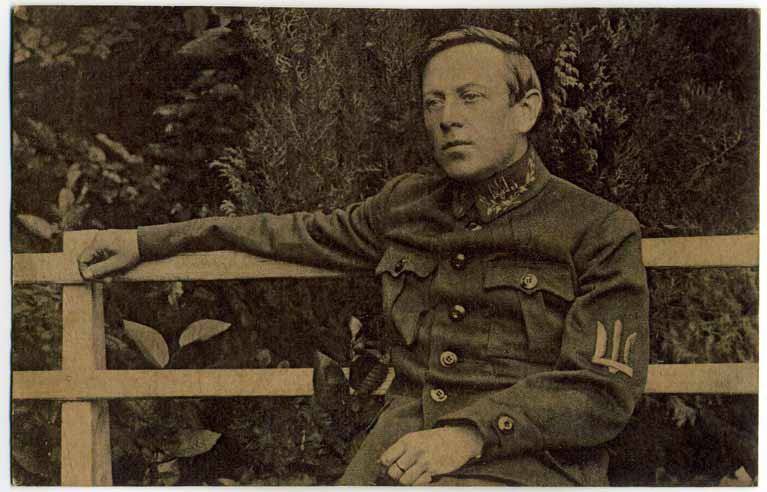 Simon Petliura had strong leadership qualities and an extraordinary mind, he was always interested in art, liked to speak on the topics of literature and drama in Ukraine, played the violin well. Following the advice of his parents, he entered the Poltava Theological Seminary and studied there until the 1901 year. It was not possible to finish it, since he was expelled for poor academic performance and participation in the meetings of the Revolutionary Ukrainian Party. Young Petliura in search of work in the 1902 year comes to the Kuban. His dream was to become a teacher, but his reputation as a revolutionary and troublemaker closes all doors before him. He makes a living by printing in local newspapers and collections. His study of Kuban, published in the Literary and Scientific Gazette, is known. Hiding from the authorities, in 1902, Simon moved to Yekaterinodar, where he was arrested in December 1903. After being released in March 1904, he entered the university in Lviv. He returned to Russia in the 1905 year after the amnesty. Before 1907, the expedition explores the steppe regions of the Kuban, works as a teacher, accountant, and editor of the Slovo newspaper. Due to the threat of another arrest, Petlyura leaves for Moscow. In the period from 1907 to 1912, he edits the magazine Ukrainian Life, marries, and his daughter Lesya is born.

With the onset of World War I, Petlura’s life changed dramatically. First, he is arranged in a charity organization that deals with consumer services of the royal army. At the end of May 1917, the Central Rada of Ukraine held elections for the first military congress of Ukrainians. Military uniforms and education give Petlura the advantages, and he gets into the composition of the delegates. Later, with the reputation of a Social Democrat, he joined the presidium. After the formation of the Central Rada government, Simon is appointed Minister of Military Affairs. The reasons for such a rapid career take-off are explained by the fact that Ukraine lacked literally adults. In addition, Petliura was delegated from the front. His personal qualities, ability to negotiate and experience in military affairs then did not matter. 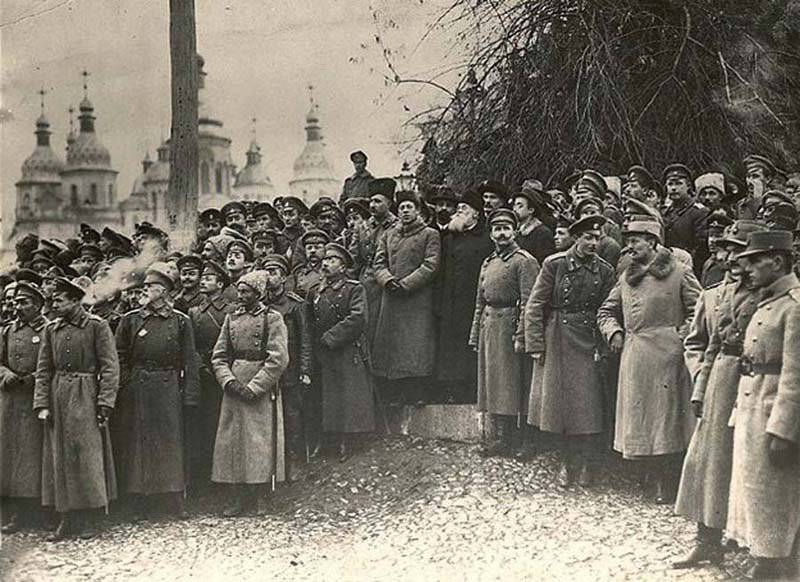 In the early days, Petliura decided to defend an alliance with Russia. At the same time, he advocates a war with Germany and Austria. The provisional government in Russia is completely satisfied with this state of affairs. They began to create "Ukrainianized" military units. Petlura spent most of his time in a train car traveling through the western regions of Ukraine. A colleague wrote about him:

“Petlyura is an idealist without any scope. But what I liked was a certain feeling of love for everything Ukrainian. This feeling was genuine and without any personal utilitarian goals. It was evident that people do not work from under the lash, but with passion. ”

However, after the October Socialist Revolution, the new Soviet government signed the Peace Ordinance with Germany. The eastern front disintegrated, which worried the Entente countries. Their only hope remained the Central Council. Simon Petliura accurately caught the wind of change and, as Minister of Military Affairs, began negotiations with Western diplomats in Kiev. But I was glad to consider it more promising to unite with Germany, rather than relying on the promises of the Entente countries and the USA. After that, Petliura only had to resign.

Power changes people. Petliura felt her taste and did not want to part with it. Therefore, he goes directly to Poltava region, with the support of the friendly local ataman Volokh, to organize his own Haidamak military detachment. It was based on the Cossacks and foremen from the Kiev military schools. In the winter of 1918, Petlyura comes to Kiev to the aid of the Central Rada, which, under the pressure of the advancing Red Army, is rapidly losing supporters. Petliurists brutally suppress the uprisings of workers in the city. In those days, they killed about 1500 people. Two days later, the Central Rada fled the city. Petliurovsky detachment covered her retreat to Zhytomyr. Here 27 January 1918, they joined with the German-Austro-Hungarian troops, launching an attack on Kiev. Thus, by coincidence, Petliura was associated with the seizure of Ukraine by German-Austrian troops. He wrote in 1925:

“It is necessary to remember only one thing: if the Central Council did not call the Germans, they themselves would come to us. They knew well that the front was no longer there, and in Ukraine there was neither a large, disciplined army, nor firm power, then the road to us would be free: no one would stop. ”

The occupiers created the Ukrainian state under the leadership of Hetman Skoropadsky. Petliura gained the post of chairman of the All-Ukrainian Union of Zemstvos, but was hostile to the new regime. In August, 1918, Petliura was arrested. After his release, he was able to get to a nearby squad of Sich Riflemen. That same night, he wrote on his own behalf an appeal to all the people of Ukraine with a call to start an uprising. Having spread throughout the country, the liberation movement instantly ceased to be controlled, resulting in the self-actions of individual gangster atamans. Pogroms and destruction took place throughout Ukraine. Some gangs fixed up special atrocities by shooting their victims without trial. The real extermination of the Jewish population began. A huge number of people killed, hundreds of cities and villages burned to the ground. Lawlessness in Trostinets and the Uman massacre, atrocities in the town of Slovechno and the Novomirgorod massacre, pogroms in Smela, Radomysl, Elisavetgrad will remain forever in history. According to eyewitnesses, Petlyura did not approve of anti-Semitism, but was not going to stop him. Atamans, squad commanders, acted at their discretion throughout Ukraine. Petliura gave them complete freedom of action and diligently did not notice the crimes they committed.

In the winter of 1918, the German occupation ended. Petliura single-handedly led the troops of the Ukrainian Directory. In January, 1919, in order to increase its authority in the eyes of the Entente countries, the Directory officially declared war on Russia. Allied forces landed in Odessa, but did not rush to the provision of military assistance to Ukraine. And the war flared up more and more. In February 1919, the Directory left Kiev. In response to a desperate request for support, the head of the allied forces, Colonel A. Freudenberg, asked to remove a number of people from the leadership. Petlyura with the short phrase “for banditry” got into this list. The management of the Directory only partially fulfilled their request, limiting its authority. At a meeting in Proskurov 14 in March 1919, Petlura stubbornly defended the decision to continue negotiations with the Entente. He also managed to prevent a long-overdue peace treaty with Russia. For military assistance Entente appointed a huge price. In three months, the directory was to form an army with a number of thousands of people in 300 and put it under French command. Also under the control of the French passed all the finances of Ukraine. These plans were not destined to come true. Without waiting for confirmation of the peace pact, the Red Army again launched an offensive and ousted the Ukrainian army to Poland.

After the negotiations with the Entente were stumped, and their troops were driven out by the Red Army, Petlyura went to negotiations with the Poles. Now his obsession was to liberate Ukraine from Soviet troops with the support of Poland. 21 April 1919 Petlura signed the Warsaw Agreement, under which Western Volyn and Eastern Galicia passed to Poland. After this, the liberation army marched. At the same time, Petlyura is attempting to come to an agreement with Denikin, who also moved towards Kiev at the head of the Volunteer Army. By coincidence, 31 August between Denikinians and Petliurists an armed clash occurred because of insulting the Denikin banner, which put an end to the relationship that had begun. Petliura betrayed his headquarters, after which he had to flee to Warsaw. And 12 June 1920, Kiev was again occupied by the Red Army

In 1920, Russia forced Poland to sign the Riga Peace Treaty, and Petlura leaned toward Baron Wrangel. But the joint November offensive of the White Guard units and the Petliura troops did not lead to success. When Wrangel's troops were defeated in the Crimea, the Petliurists laid down weapon. In 1923, the Soviets demanded that Warsaw be given Petlura, so he and like-minded people fled to Hungary, then to Vienna and Geneva. Finally, in October 1924, he settled in Paris, where 25 May 1926, was killed by a pistol shot by some Samuel Schwarzbard. According to one version, the killer was an anarchist, a friend of Nestor Makhno. According to another version, Schwartzbard avenged the relatives killed in Ukraine. He was later acquitted.

There is no unequivocal assessment of the actions of the disgraced ataman. In Dnepropetrovsk, there is a plaque installed in memory of the victims of Simon Petliura and his soldiers. And on May 16 on Ukraine's 2005, the president signs a decree to perpetuate the memory of the ataman and erect monuments to him. But today it is known that he still has no monuments.

25 May 1926 in Paris, the former chief ataman of the army of the Ukrainian People’s Republic, the former head of the Directorate of the UPR, Simon Petlyura, was shot with five shots at close range. The killer was detained by the police at the scene of the crime. He said that he killed a man of revenge - for the Jewish pogroms during the Civil War in Ukraine.
However, there were other versions of the murder. In the emigrant environment, for example, they were convinced that this was the work of the NKVD.
The film, exploring all the options, tells история the elevations and deaths of Petliura, who in his homeland are considered by some to be a national hero and others to be a traitor.

Simon Vasilyevich Petlyura - Ukrainian political and military leader, head of the Directory of the UNR (Ukrainian People's Republic) from 1919 to 1920, Chief Ataman of the Army and Fleet.