The regiment's contentment in the war 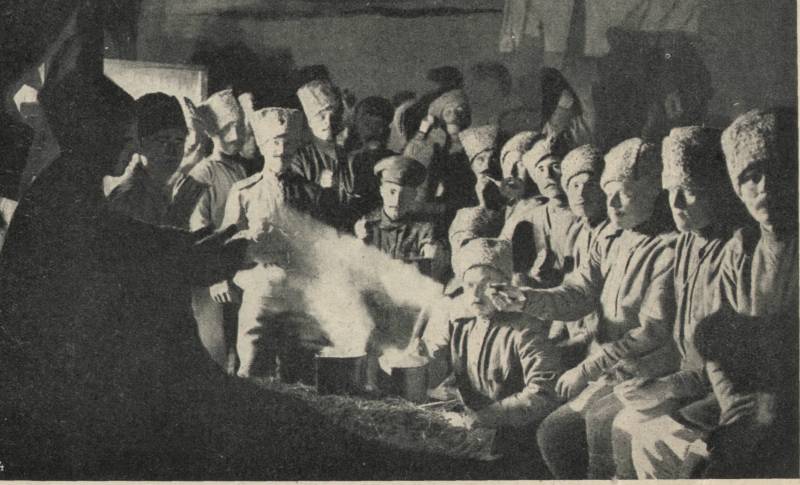 At the end of July of the 1914 year, on the 8 day of mobilization, having turned around to the military personnel, V. Panov’s regiment was sent by train to the German border by several trains.

On the way, the servicemen "were content normally." Each train (battalion) for cooking had special cars in which camp kitchens were installed. As a result, people received food as in peacetime, when the units were in a barracks arrangement (this concerned both the time of eating and the quality of the latter). They handed out food at more or less long stops - at the last people went to the “kitchen” cars with bowlers (and often with buckets), getting breakfast, lunch or dinner. To take food, the soldiers were either in their wagons or on the sides of the railroad track - which depended on the length of the train stop. 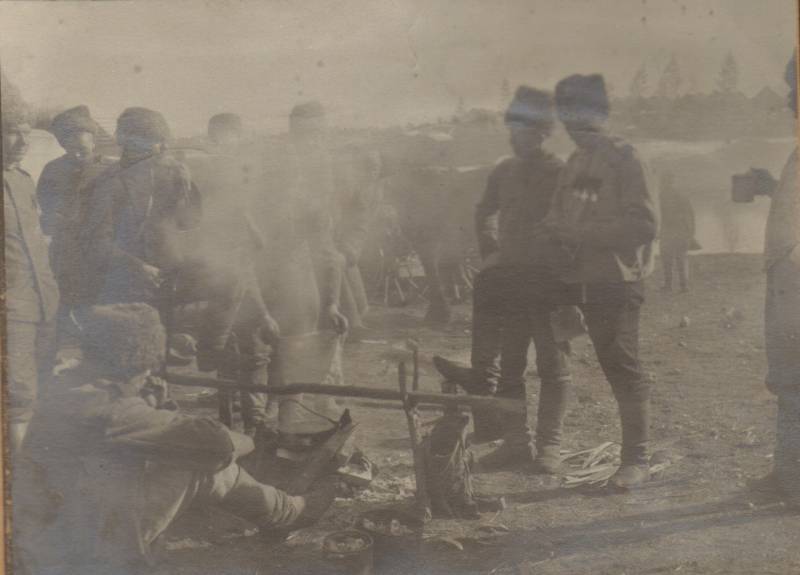 The soldiers are preparing dinner.

Food was received from passing commissary shops - in accordance with a previously issued order. The officer gives an interesting detail, which then caused a lot of trouble. As soon as the train left the outskirts of the city, bags of rusks sprinkled from the windows and doors of the cars onto the railroad track - it was the soldiers who eased their burden by throwing out the 3-day supply of rusks in their duffle bag. At the first stop, they explained the inadmissibility of such behavior, and the seniors in the cars were ordered to ensure that crackers were not thrown away. But the results of this measure were still far from sufficient - and crackers continued to fly out of the cars, if not during the day, then at night. In addition, people, having nothing to do, first in the carriage, and then on the hike, bit by bit their crackers - destroying, thus, that untouchable supply that should have been used only in case of emergency. Having landed on Art. Druskeniki, the regiment continued to march, crossing the German border on the 4 of August at Filippov and occupying Goldap in East Prussia after a short battle. 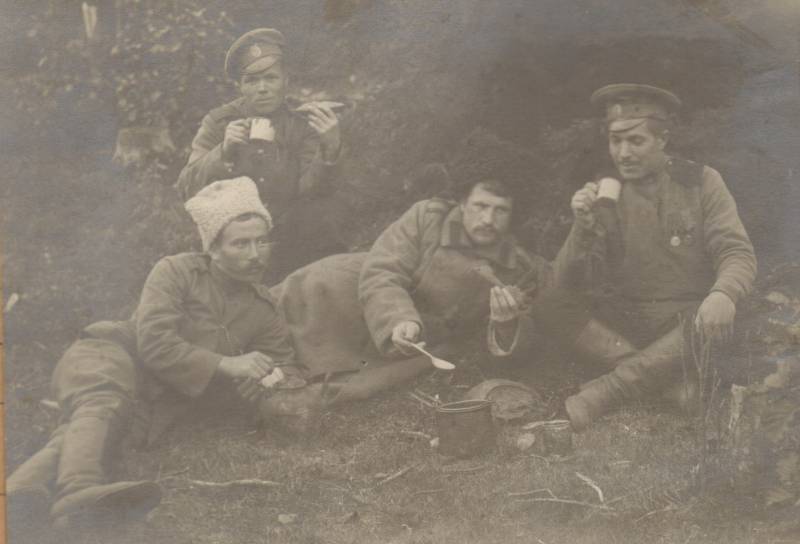 With pleasure, so far everything was safe, as in peacetime maneuvers - with the exception of the lack of bread, which began to be felt due to the delay in the delivery and deployment of field bakeries. This did not happen because there was no coordination in the rear units when moving behind battle groups, but simply because the Russian headquarters couldn’t take into account advancements so fast in enemy territory, and even with battles - well knowing the combat effectiveness of the German army . It was then that I had to regret the rusks thrown out on the road, and the grain crisis was eliminated (and even not to the full extent) only thanks to the following case. In the city of Goldap occupied by the Russians, there was a quartermaster's food store, where they found a fair amount of different food and a lot of fine small biscuits made from wheat flour - grains - which they used. But since such delicate things are “not food” for unusual people, the Russian soldiers were bored without rye bread, not feeling enough satiety from these biscuits. 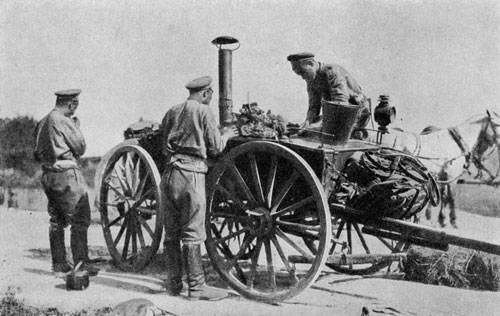 Then things went even worse, because after the battle at the village. Kudern (in 8 km northwest of Goldap), pursuing the retreating Germans, the fighters still took a step - rushing either to Friedland, then to Tartenshane and further with transitions sometimes exceeding 60 versts per day. Here, the quartermaster was completely stuck somewhere behind, and with it all the provision of food was lost, i.e. bread, cereals, tea, sugar and salt. It was very tight, despite the fact that we walked through a cultural country rich in agricultural products. This was explained by the fact that almost the entire population of East Prussia, as the Russians approached, went deep into the country, and the rest was so hostile that it hid its stocks or simply did not want to sell anything. But the troops themselves to search for food hidden in different nooks, and even more so to take it by force, firstly, there was no time (due to rapid movement), and secondly, the authorities in this matter were surprisingly scrupulous and strictly forbidden to accept what or violent measures against those remaining and only outwardly loyal to Russian local residents.

In the morning, before the performance, the prepared foods were laid in camp kitchens, and dinner was prepared on the move, so as to be distributed to the soldiers on a large halt. The latter was organized, as a rule, having traveled most of the way, in a place that was sufficiently sheltered from enemy air reconnaissance — mainly in forests, and, sometimes, contrary to statutory requirements, in villages, in the hope that the German would not drop bombs on the homes of his fellow citizens . 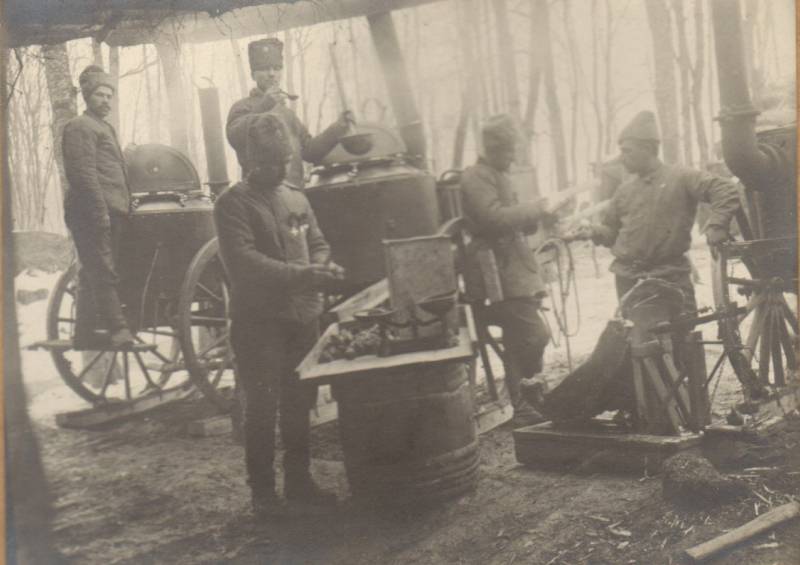 Immediately after the regiment stopped, the kitchens were drawn to the battalions - and the distribution of dinner began. From each platoon, several people went to the kitchen to receive food, under the command of a company duty officer - with bowlers. The company on duty monitored the distribution of food, informing the kitchen duty on the number of people who were on allowance in the unit. If avant-garde units were sent from the regiment and those did not change at a large halt, then the corresponding number of kitchens were pulled up to them, and sometimes the kitchens followed immediately after the avant-garde. The bowler was designed for 2 - 3 people. The meat was crushed into small pieces in soup (as such, meat portions were not issued). In favorable conditions, lunch consisted of 2 dishes.

After the distribution of lunch, the boilers were immediately washed, and food was laid for dinner. The latter, as a rule, included one dish - the so-called gruel with chopped meat or potato soup. 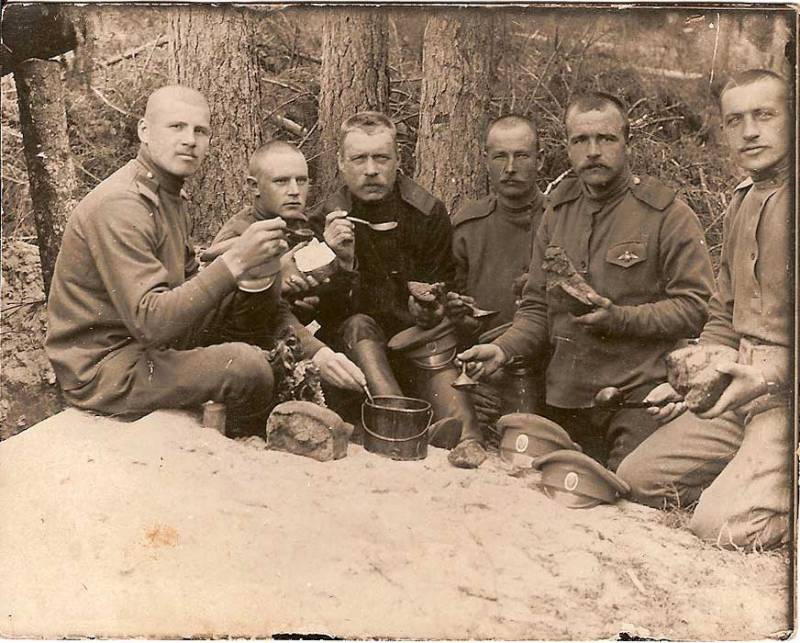 Dinner, as noted by V. Panov, did not enjoy the special love of the soldiers, although it was prepared quite tasty. The explanation was simple: the fact is that the inhabitants, as already noted, before the Russians approached, fled into the country, leaving all their households, livestock and birds to their fate. All this living creature, accustomed to careful care and timely feeding, wandered through the fields and streets of villages, loudly declaring their existence and attracting attention with various cries, and therefore soldiers at any stop, despite the accepted, though not entirely strict, precautionary measures, did not miss the chance to milk the cows, look for fresh eggs in the chicken coops, or even roll up the head of a chicken, goose, turkey or pin a pig.

There were also such cases that in a company of fighters there appeared lard, sausage and smoked ham. To the questions of the bosses, where did all this come from, they usually answered: “They bought from a German”, while the more frank ones stated that the rear units would be lost or taken away without a master. Commanders usually objected weakly to such arguments, observing only that they didn’t take anything from the residents who remained on the ground — and I must say that there were no misunderstandings in this regard (with very rare exceptions, and that only with respect to fruits, growing in the gardens). The soldiers, if they allowed themselves to “buy” something in cities and estates, in the villages clearly refrained from such a “purchase”, since they knew that the departed population consisted of peasants related to them. Unfortunately, the officer notes, the same cannot be said for any kind of convoy and transport public, which sometimes “simply looted”.

Thus, stocking up food on a camping trip and arriving for the night, the soldiers, of course, in most cases refused the official dinner (albeit tasty) and set about preparing one of their “own” products, using various closures (to light the lights for the night) it was forbidden to find oneself out of fear). Over time, the precautions weakened - for the German was surprisingly passive.