Cossacks in the Great Patriotic War: For Faith and Fatherland!

July 3 2012
17
The theme of the participation of the Cossacks in the Great Patriotic War continues to be the basis for many speculations and speculations based on outright lies. Falsifiers stories, like parasites, multiplied on the body of the dead Soviet empire, taking advantage of a certain impunity and fulfilling a clear political order of their foreign masters, they conducted and still continue to conduct their disinformational subversive activities, distorting the fundamental tenets of the history of the Great Patriotic War, blackening the memory of her fighters who fought against global evil, the personification of which in the first half of 20 century was German Nazism. Falsifiers of the history of the Fatherland actively exploit the theme of the participation of the Cossacks in the Great Patriotic War on the side of Germany. Numerous online publications and materials of some mass media devoted to this really difficult and insufficiently studied topic emphasize that the transfer of the Cossacks to the enemy was massive, and the number of Cossacks who fought on the Wehrmacht side significantly exceeded the number of Cossacks who swore allegiance to the Red Army - pseudo-scientific works actively replicated both mechanically and deliberately, in pursuit of "sensations" and "revelations." The material of publications devoted to this issue is presented one-sidedly and clearly biased, which makes it possible to call them not only pseudoscientific, but simply frankly deceitful, serving the goals of the information war being waged not only against the Cossacks, but also against Russia and its citizens. The official Soviet historiography contributed to the possibility of distorting the facts related to the participation of the Cossacks in the Great Patriotic War, which assigned the Cossacks a worthy place only in the pre-revolutionary history of Russia and did not recognize the mistakes made by the Soviet authorities in connection with the story. 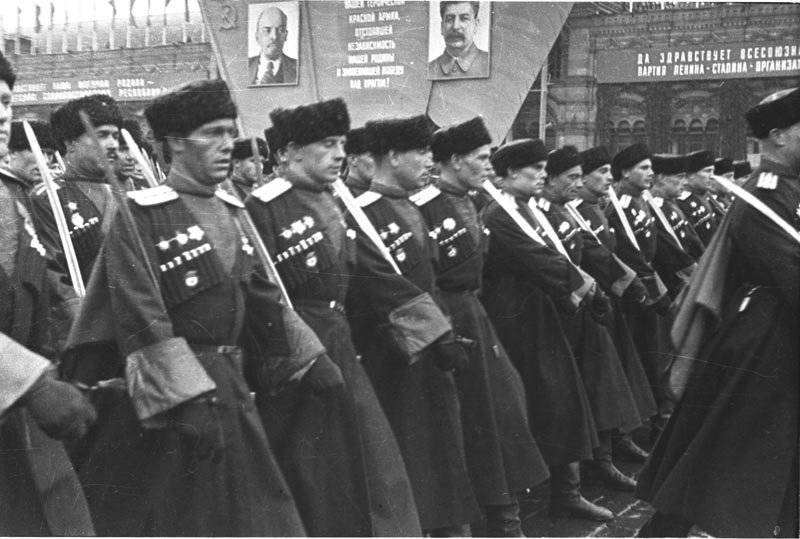 We will state from the very beginning that the statement about the mass character of the transfer of the Cossacks to the side of the German army in World War II is a lie! In fact, only a few of the atamans turned to the side of the enemy, and on the side of the Red Army fought Cossack cavalry divisions, 40 Cossack cavalry regiments, 5 tank regiments, 8 mortar regiments and divisions, 2 anti-aircraft regiments and a number of other units, fully equipped with Cossacks of all troops. With the money of the Cossacks, several tank columns were built - "Kooperator Don", "Don Cossack" and "Osoaviakhimovets Don".

It should be said that the fate of the Cossacks after the upheavals of the 1917 year and the fratricidal distemper that followed them simply could not develop simply and unequivocally. Cossacks from time immemorial were at the forefront of any armed struggle, and their love of freedom and devotion to his ideals, of course, went against the policy of the Soviet state on the story and other repression against the age-old opera of the Russian state - the Cossacks. The storytelling and theomachism painfully struck these freedom-loving people, some of whom chose to betray the continuation of their main business - the defense of the Fatherland from an external enemy. The absolute majority of the Cossacks, despite all the insults that the Soviet government inflicted on them, faithfully kept their oath of allegiance and simply defended Russia, its people and the Holy Faith of Christ. The shame of the traitors, who are committed to oblivion, is endless, and there is no excuse for it, and the glory of the faithful to the oath and the truth of the Victors will live for centuries!

Cossacks entered the fight with the enemy from the first hours of the war. The first Cossacks who entered into battle with the German units on the Western Front were the Cossacks of the 94-Beloglinsky regiment. The fighters of this unit fought with the enemy, advancing in the direction of Lomza, in the hours of general confusion that reigned around - early morning 22 June 1941.

24 June 1941 of the year in the village of Veshenskaya hosted a large detachment of Cossacks. The writer Mikhail Sholokhov addressed the Cossacks with a parting word: “We are sure that you will continue the glorious military traditions and will beat the enemy, as your ancestors beat Napoleon, as your fathers were Germanic Kaiser troops”.

Voluntary hundreds were actively forming in the villages. Cossacks came to assembly points by families with their own uniforms. For example, the Cossack PS Kurkin led the militia detachment of Donts of forty people.

Along with the cavalry of the Kuban and Territories were formed Plastun Cossack Division.

By the beginning of the autumn 1941 of the Orenburg Cossacks of the Chkalov region were formed 89-I (subsequently renamed the 11-th cavalry division named after F. Morozov) and 91-I cavalry Cossack divisions. By the beginning of winter 1941, the 15-I special Don Cossack Cavalry Division was formed. 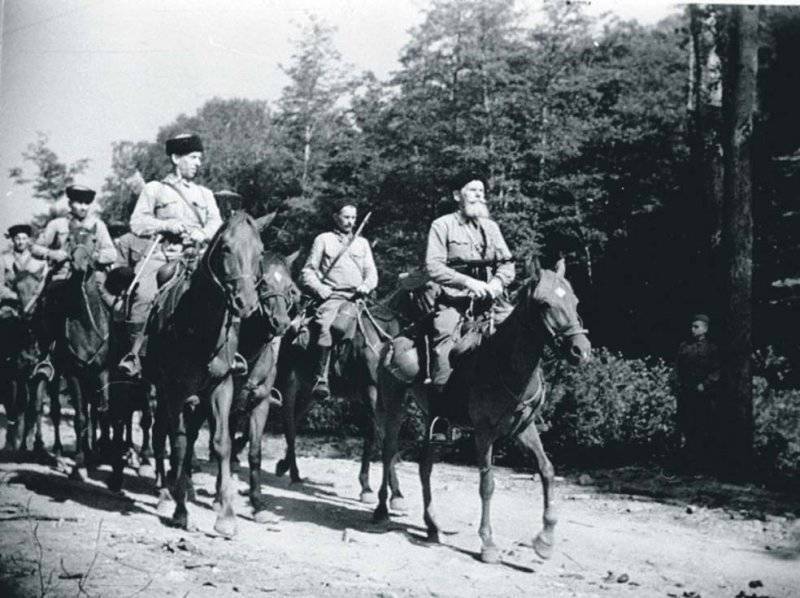 The heroism shown by the Cossacks in the Battle of Moscow is especially remembered. The squadron of the 37 regiment from the Caucasian group of L. M. Dovator led by lieutenant Vladimir Krasilnikov led a desperate battle with the advancing infantry and the Nazi tanks. In two hours, the valiant Cossacks repulsed three violent attacks of the enemy, destroyed 5 tanks and around 100 fascist infantry. In that battle only seven Cossacks survived.

At the beginning of 1942, the Cossack volunteer divisions were enlisted in the personnel of the Soviet armed forces and put on full state support. In March 1942, as a result of the unification of two Don and two Kuban divisions, the 17 Cossack Cavalry Corps was formed, under the command of the most experienced military leader, veteran of the First World and Civil War, Major General N. Ya. Kirichenko. 2 August 1942, under the village of Kushchevskaya, the fighters of this Cossack unit, which was part of the 12-th Terek-Kuban, 13-th Kuban and 116-th Don Cossack Divisions, stopped the German attack on Krasnodar from Rostov. The Cossacks destroyed about 1800 the Nazis, took 300 prisoners, captured 18 guns and 25 mortars.

In 1943, the formation of horse-mechanized groups began. The groups had excellent mobility, because the horse was still used for transitions, and during the battle, so as not to be an easy target for rifle and artillery weapons the enemy, the cavalry dismounted and acted like ordinary infantry. Cossacks skillfully used their traditional skills in the changed conditions of combat.
The Cossack units played a huge role in the liberation of Europe and in the decisive Berlin operation - it was not the first time for the Cossacks to liberate Europe.

With the transition of the strategic initiative to the Red Army and the beginning of its advance to the west, the role of the Cossacks continued to increase. As part of the 1 of the Byelorussian Front, the Cossacks of the 7 Guards Cavalry Corps, Lieutenant General Konstantinov and 3 Guards Cavalry Corps, Lieutenant General Oslikovsky were driving the enemy to the West. Having fought 250 for kilometers, defeated the famous Fascist division “Hermann Goering” and three more Nazi divisions and captured more than 14 000 soldiers and officers of the enemy, the Cossack 3 Guards Cossack Corps captured the German Lenten region and the Lentsen district and captured the Lenten district and the Lenten region. Elba, where Soviet troops first established a direct connection with the forces of the Anglo-American allies. It is not by chance that in the famous song of Caesar Solodar “Cossacks in Berlin”, written in May 1945, the following words are heard: “... it’s not for the first time for us to drink Cossack horses from a foreign river”! 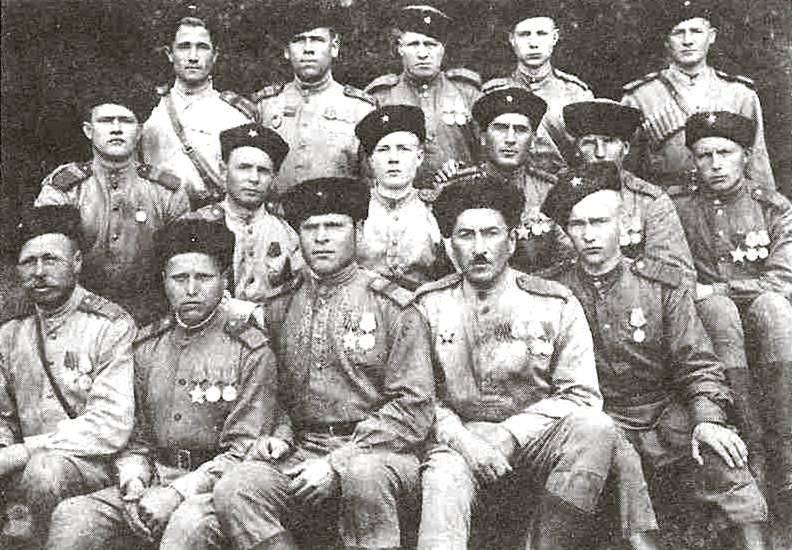 7 Guards Cavalry Corps was tasked to seize the area Sandhausen, Oranienburg and thereby prepare the attack of Soviet troops on Berlin from the north. By 22 on April, the combat mission assigned to the corps was completed, and in the occupied territories about 35000 prisoners were freed from concentration camps.

For their accomplishments and heroism, shown in battles with the enemy, thousands of Cossacks were awarded military orders and medals, and 262 Cossacks became Heroes of the Soviet Union.

I would like to believe that the memory of the contribution of the Cossacks to the victory over fascism will be carefully preserved by descendants, and the falsification of history, blackening the image of the Russian Cossack and questioning the enormous role of the Cossacks in the defense of the Fatherland, will have no place in our information space.