Israel introduced a new assault rifle to compete with the AK

April 9 2019
159
New Israeli Carmel assault rifle was recently presented at the LAAD 2019 exhibition, which opened in early April in Rio de Janeiro. Israelis start the game with a long-range view - the Latin American market is considered one of the most promising for the Middle Eastern state. 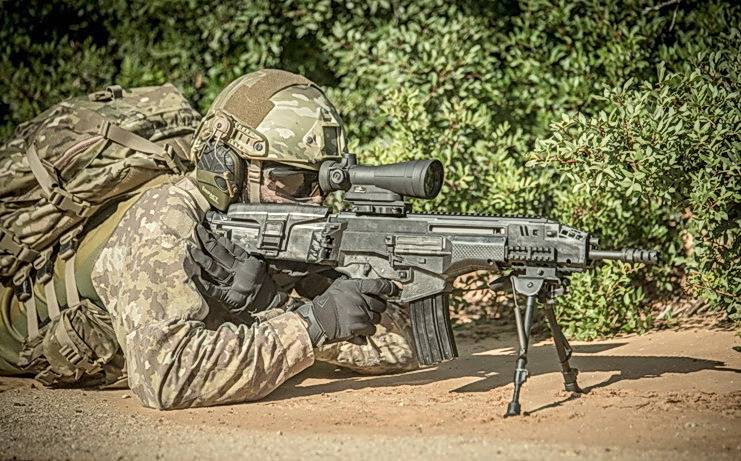 Carmel, in contrast to the bull-pops Tavor and X95, to which the Israeli army in recent years, is made in the classic layout. The new machine is a product of the SK Group, one of the enterprises of the Israeli arms giant Israel Weapons Industries (IWI), and apparently, the Israeli army is unlikely to accept it as the main small weapons.

Maxim Popenker, one of the leading historians and connoisseurs of small arms in Russia, described the situation in his commentary for "VO":

The prospects of the [assault rifle] are not clear, but it is clear that it will only be exported. The competitiveness of the weapon will depend solely on the policy, because this unit will obviously be more expensive than AK 100 and 200 series.

Israeli weapons small arms have long been present in the countries of South America. In particular, the Galil Ace machine gun, the deep development and rethinking of the Kalashnikov machine gun, has long been in service with the Colombian army: there it is licensed by the local company Indumil.

As the standard army rifle Galil Ace chose the armed forces of Chile, the machine gun bought Ecuador, Honduras, El Salvador and Guatemala (where the police use it), Peru is going to produce it under license, releasing 2000 rifles per month. 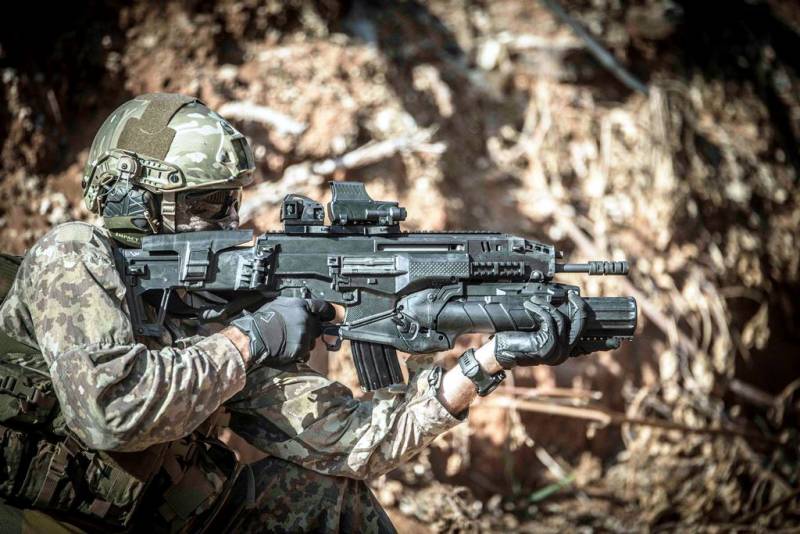 Although a number of sources mention that the new machine has a base from Galil Ace, in the opinion of Popenker, “Galil was not lying there”.

In order to remain among the leading manufacturers of small arms, we need to offer new solutions, new ideas and new products, adapt to the modern war and meet the requirements of our existing and potential customers. We need to look to the future, since the development of new weapons still takes about 3-4 years, although we are trying to minimize the time

- explained Ronen Hamudo, vice president of marketing and sales for IWI in an interview with EDR On-Line.

The desire to get “the newest product” mentioned by Hamudo is one of the reasons why, in his portfolio, in addition to the bulldolls, Galil Ace, IWI is developing a new rifle with a classic layout.

Galil Ace is a very successful rethinking of the AK, but a number of clients may be interested in a rifle that has a completely new design and is not limited by the parameters set during the Second World War.

Now, with a new rifle, IWI got the opportunity to go to tenders with more modern solutions, as well as more classic ones, which managed to catch the fancy of clients. 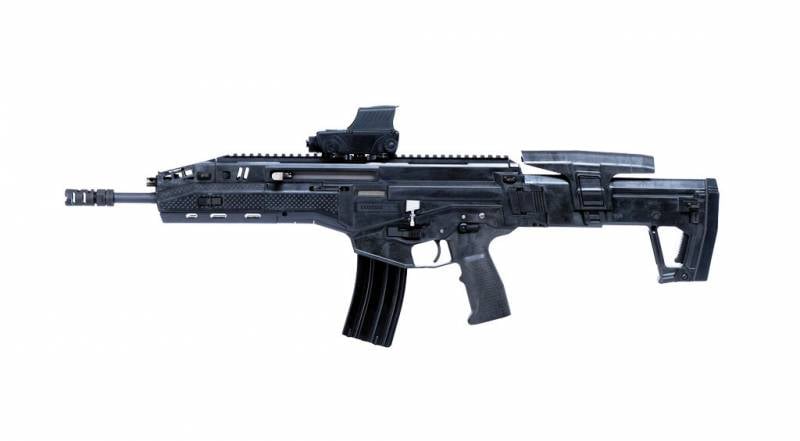 The experience gained with previous products was fully utilized by the designers of IWI, Carmel is in fact a completely new weapon that, nevertheless, supports the company's philosophy, especially in terms of ergonomics.

Carmel has a gas piston with a short stroke and a butterfly valve. Its rate of fire is about 850 shots per minute. All moving parts of the machine are enclosed in a monolithic aluminum case with anodized coating, which is partially covered with a plastic casing.

All controls are bilateral. The fuse, the latches of the magazine and the shutter, as well as a number of other elements can be rearranged from right-handed to left-handed and back for a few seconds.

The gas regulator has three positions: normal, extreme and overwhelming, it can be switched depending on the conditions of the battle.

There are four interchangeable trunks: 267 mm, 305 mm, 368 mm and 406 mm, cutting pitch 1: 7. To ensure maximum accuracy, IWI applied the solution with a freely hung barrel; a quick-detachable system was also used to ensure maximum modularity, which, according to the company, ensures a barrel change in a matter of seconds. 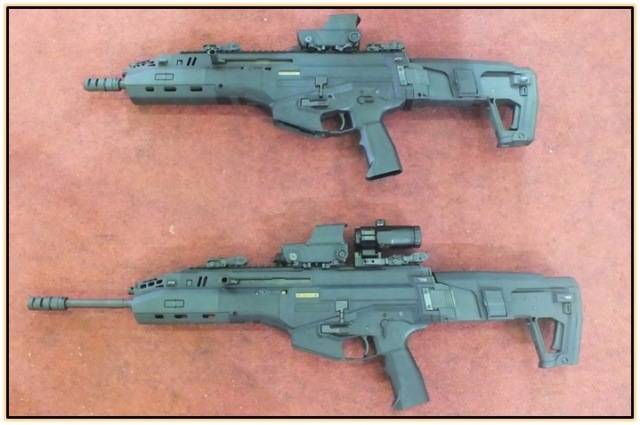 The butt has 6 fixed positions (7 if counted folded). With a short barrel, the length of Carmel is 526 mm with a folded butt, 721 mm with an open and 806 mm with a fully open “telescope”, weight without a magazine and an external sight - 3,3 kg. 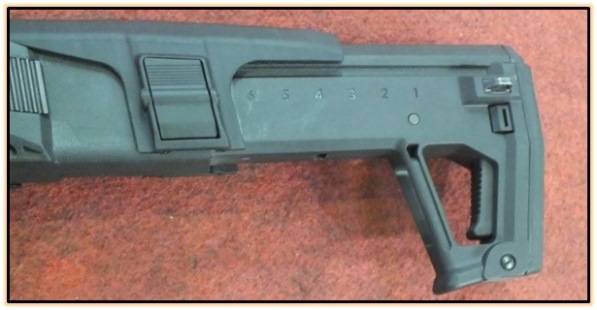 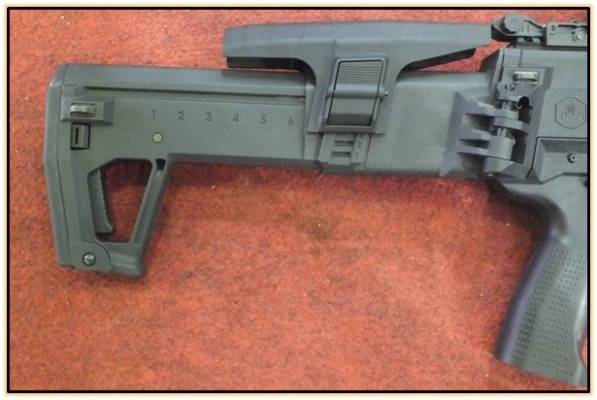 Thanks to the telescopic butt, the machine can be adapted for a soldier of virtually any height. IWI has optimized the new rifle with Meprolight sighting systems, the company is also part of the SK Group, although any other sight can be mounted on the rifle.

IWI used its previous experience in developing a pistol grip to make it as ergonomic as possible, while the fuse was designed to allow for firing with gloves.

The main small arms of the Israeli army are still the X95 bullfights — the development of the Tavor assault rifle. At the moment, the rifle is being purchased by the Israelis in a fully automatic version, while previous deliveries came in the form of a semi-automatic.

The IDF is not interested in the new IDF assault rifle, however Carmel was sent for testing in several departments, for receiving comments and recommendations, and was also tested in several countries of the world.

It is assumed that in the near future, in addition to the 5,56 STANAG cartridge, versions will appear under the promising 6,8 mm ammunition Remington SPC and Creedmor 6,5 × 55, as well as under 7,62 × 51 mm.

It is worth noting that in the Latin American market, the new model has every chance of becoming a competitor of AK in the struggle for the attention of customers. At the LAAD exhibition, during which the Israeli machine gun was presented, 360 samples of Russian weapons were presented. The exhibition is held every two years, and each time brings new orders to defense enterprises of the Russian Federation.

We are in Yandex Zen
IWI introduced the new TAVOR in the caliber 7,62 × 51 mm.
In the United States introduced a new assault rifle TAVOR 7
159 comments
Information
Dear reader, to leave comments on the publication, you must to register.