March 18 2019
19
This week began the "spring" truce, this is in continuation of the "winter" truce. So if you look, then with 2015, after the release of Debaltseve, now for 4, we have every quarter truce: “Easter”, “bread”, “school”, “winter”, “spring”. Not a war, but a complete truce. But, unfortunately, the Volga Federal University (armed forces of Ukraine) did not plan to comply with it, so after 5 minutes in 01: 05 they ripped it off with mines of 120 mm. The republics observe and do not give an answer, like the last two weeks before, which is why, unfortunately, our servicemen and civilians are dying.
In just the past week, the VFU bombarded the DPR 52 times. The shelling was carried out in areas of twenty settlements of the Republic using mortars 120 and 82 mm, weapons of infantry fighting vehicles, grenade launchers, large-caliber machine guns and small weapons.

In just the past week, the UFU bombarded the LC 17 times. The enemy used 120 and 82-mm mortars, anti-tank missile systems, various types of grenade launchers, the BMP-1 armament, large-caliber and small arms during the shelling. In total, more than 260 ammunition was released throughout the Republic. The areas of settlements: Lozovoe, Kalinovka, Zolotoe-5, Golubovskoe, Zhelobok, Frunze, Sokolniki, Prishib and Bold were subjected to shelling by the Ukrainian security forces.
From March 8 to March 14 March 2019, one soldier was killed and two soldiers were wounded on the territory of the Donetsk People's Republic, one civilian was wounded.
From 8 March to 14 March 2019, on the territory of the Luhansk People's Republic, two people were killed and one soldier was injured. 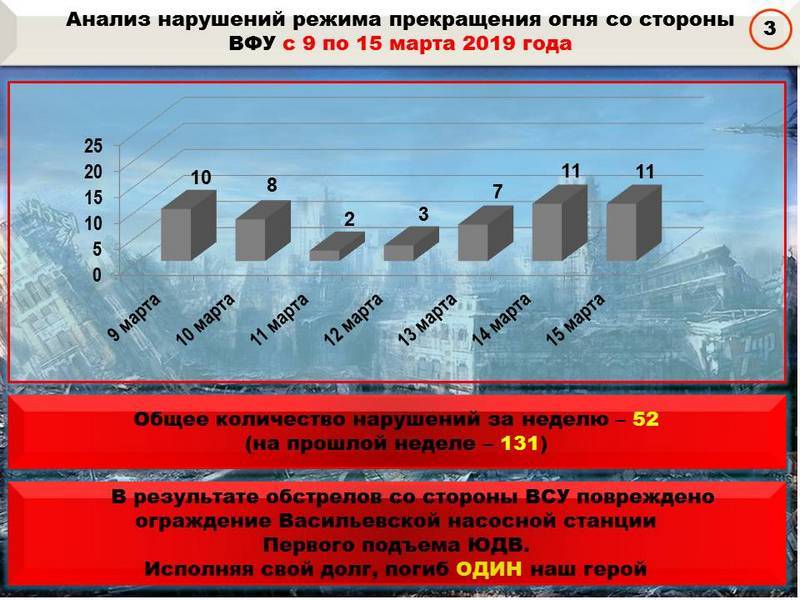 March 11, arrived lieutenant Pavlovich I.S. The 24 of the VFU mechanized brigade. During the training sessions on throwing combat grenades RGD-5 in the region of the settlement of Nevelskoye, grossly violated the safety requirement, allowing two of his subordinates to throw at the frontier at once, one of whom dropped the grenade into the trench during the exercise. As a result of this incident, two punishers received fragmental wounds incompatible with life, the head of the lesson, Lieutenant Pavlovich, was seriously injured and in serious condition was taken to hospital.
12 March, near BC Golden-4, during the transportation of personnel of the 54-th mechanized brigade of the Volga Federal University, the vehicle "ZIL" hit a mine, set by his own punitive. As a result of the explosion, two punishers died, three were injured.
12 March, at 19: 30 in the n. Groove, sabotage and reconnaissance group from the 10-th mountain-assault brigade VFU in the number of 10 punishers, attempted to penetrate the territory of the LC, but was noticed by our soldiers. During the attempted passage, the enemy entered the minefield and suffered losses in the amount of three punishers. The bodies of two saboteurs were hastily evacuated, the body of one more remained abandoned during the flight. The enemy attempts to evacuate him under the cover of mortar and sniper fire.
13 March, at 11: 45 during repair work near the Vasilyevsky pumping station I lifting the South Donbass water supply, from the 93 positions of the mechanized brigade came under grenade shelling of the DPR representative office in the JCC and repair team of the KP Donbass Water Company ". Despite the ceasefire regime agreed by the parties to the negotiations, as well as the security guarantees received earlier from the Ukrainian side in the JCCC, the Volga Federal University fired deliberately at the repair workers and the vital infrastructure. By a lucky chance, the victims of the STsKK and the repair brigade were avoided.
14 March, near BC Avdeevka in the 93-th separate mechanized brigade, due to improper handling of the grenade RGD-5, undermined. As a result of which, one punisher received fragmental wounds.
March 14, the security agencies, together with the People’s Militia of the LPR, successfully carried out an operation to ensure that the military personnel of the 54 Brigade of Private Magdenko, who wished to go to the side of the LPR, to enter our territory.
Private Magdenko, who realized the injustice and meanness of the Kiev regime's policy towards the population of Donbass, provided us with not only information about the situation of the enemy troops, but also provided information reflecting the real situation in the Ukrainian army. 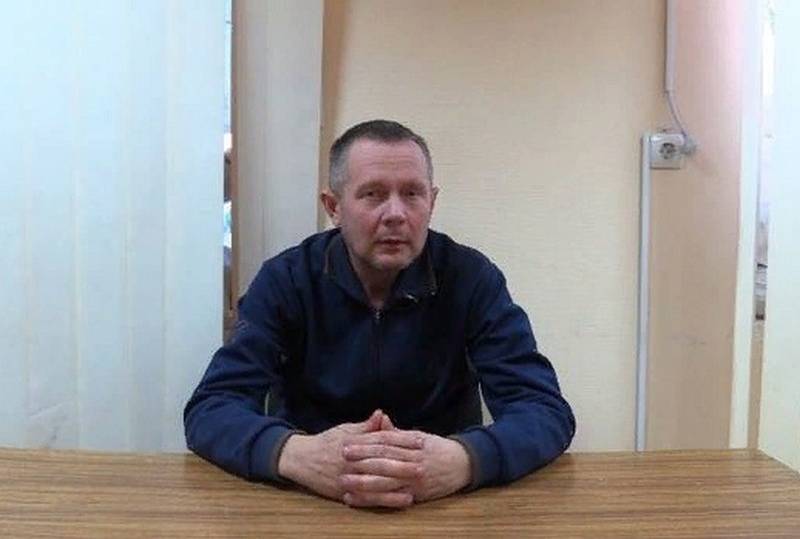 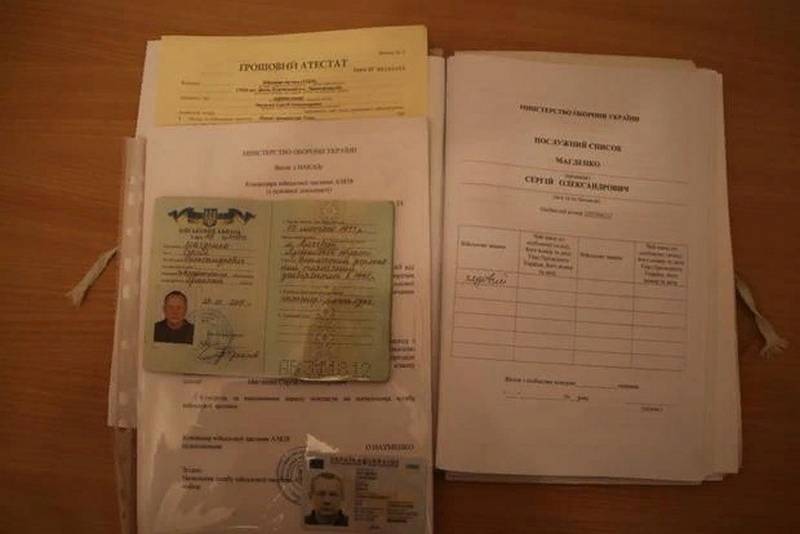 Over the past week, the enemy’s losses were: - 5 dead and 8 injured. The main part of the non-combat losses are still the careless handling of weapons and explosions on explosive devices.
The topic of road accidents involving military service personnel of the Volga Federal University is still a headache for the command. According to the military prosecutor's office, only from the beginning of the year, 285 cases of accidents on personal and service vehicles by the Ukrainian military were recorded. As a result, more killed 35 military and 15 civilians.

Data on the movement of l / s and no equipment. 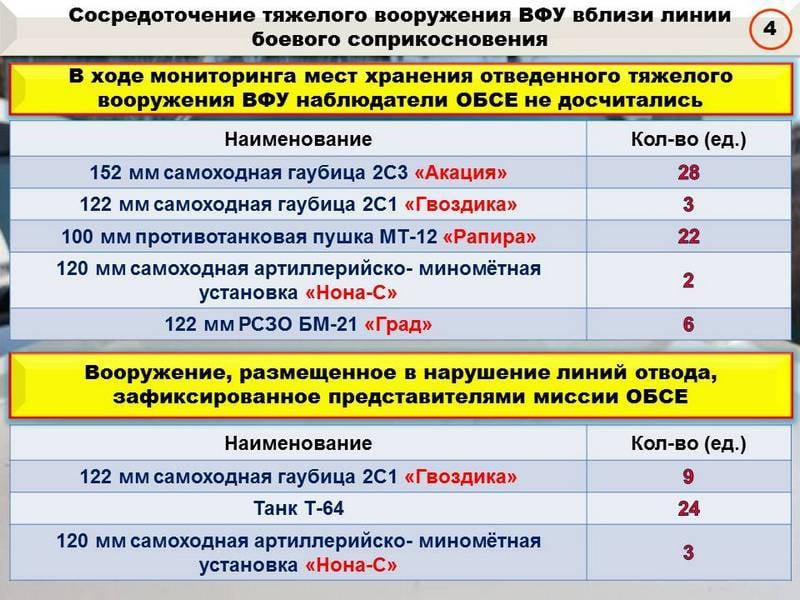 OSCE SMM monitors regularly record the results of attacks on the territory of the Republic by the Armed Forces of Ukraine.
The Mission's BLA recorded an APU infantry fighting vehicle in the area of ​​the settlement of Golden-xnumx. Representatives of the special mission recorded another combat armored vehicle near the settlement. Popasnaya and 4 BMP units in the area of ​​n. Muratovo. In the area controlled by the Kiev law enforcers n. Old Aidar, in close proximity to the LBS, the mission drone discovered the ZU-7.
Representatives of the OSCE mission continue to record the prohibited equipment of the Armed Forces of Ukraine on the contact line. This week outside storage areas revealed:
9 units SAU 122 mm "Gvozdika" in the region n. Novoaydar;
3 units of CJSC "Nona-S" in the area of ​​the settlement Novoaydar;
1 unit of the OSA "Osa" in the area n. Novokhtyrka.
In addition, this week the Mission recorded a lack of
57 units prohibited by the Minsk Armaments Agreement:
28 units SAU 152 mm "Acacia";
3 units SAU 122 mm "Carnation";
22 units anti-tank gun "Rapier";
2 units of CJSC "Nona-S";
2 units MLRS "Grad".

Over the past day, the APU fired at the DPR 2 times, the LC was not fired. 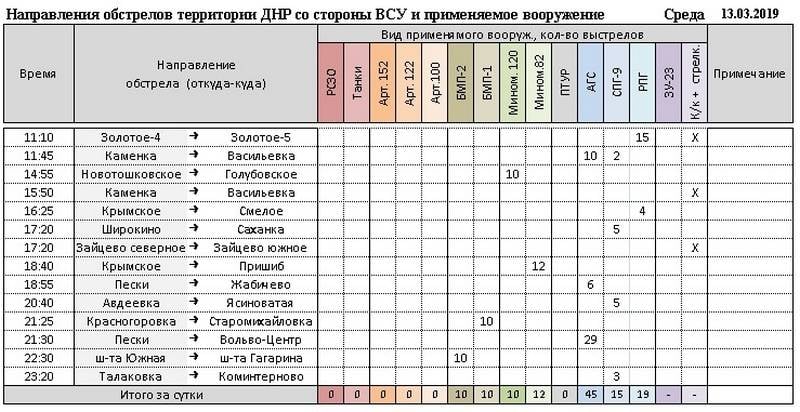 All patience and health!