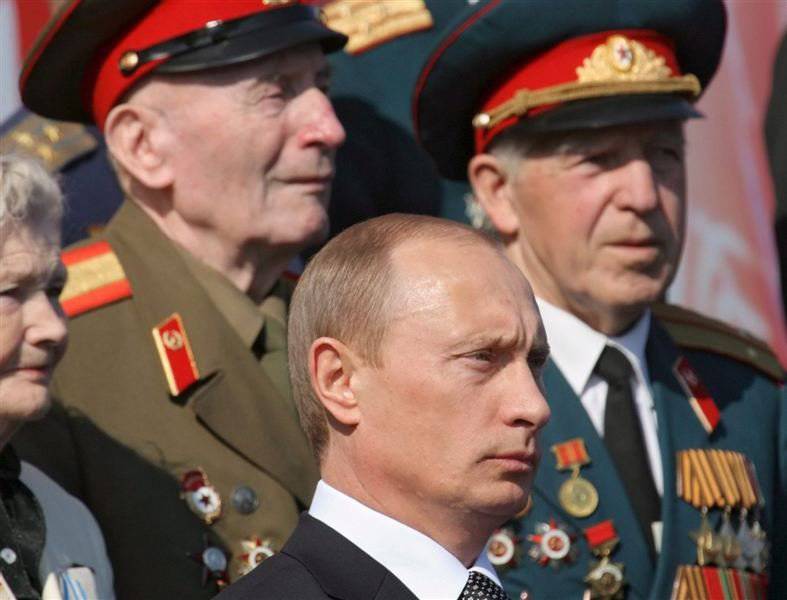 The Syrian crisis has entered a new phase. The process of destabilization, which according to the plan was to open the right way for military intervention to the Atlantic Alliance, has been thwarted. After removing the mask, the United States has publicly announced the possibility of an invasion of Syria, bypassing the Security Council, as they did in Kosovo. As if they do not know that Vladimir Putin’s Russia is not the one that was under Boris Yeltsin. Enlisting the support of China, Moscow made two warning shots in the direction of Washington. Continued violation of international law by NATO and the Gulf countries could lead to a new global conflict.

President Putin has put the sovereignty of the country in the face of the threats put forward against the Russian Federation by the United States and NATO countries as the main task of his third term. Moscow has repeatedly spoken out against the expansion of NATO, the deployment of military bases near its borders and the deployment of an anti-missile shield, the destruction of Libya and the destabilization of Syria.

Immediately after taking office, Mr. Putin conducted an audit of the Russian military industry, the armed forces, and became convinced of the support of the allies [1]. Mobilizing all available opportunities, he made Syria a red line for which you can not retreat. For him, the NATO attack on Libya is comparable to the attack of the Third Reich on Czechoslovakia, and the invasion of Syria, if it takes place, would be comparable to the invasion of Poland, from which World War II began.

Any interpretation of what is currently happening in the east, in terms of the Syrian revolution and its suppression, is not only deceitful, but also ridiculous in terms of true stakes, and is a simple political statement. The Syrian crisis is primarily a stage of “wide reconstruction of the Middle East”, a new attempt to destroy the “Axis of Resistance”, the first war of the era of “gas geopolitics” [2]. What is being played out in Syria today has nothing to do with whether Bashar al-Assad can democratize the institutions of power that he inherited, or the Wahhabi monarchies of the Persian Gulf, destroy the last secular regime in the region and establish sectarian power instead. The true goal is to establish the boundaries of the new blocs, NATO (North Atlantic Treaty Organization) and SCO (Shanghai Cooperation Organization) [3].

It is possible that some of our readers startled by reading the previous phrase. Indeed, during the past months, the media in Western Europe and the Gulf countries continually daily hammered into their heads the idea that President al Assad embodies a sectarian dictatorship supported by the alauit minority, while his armed opposition embodies a pluralistic democracy. A simple glance at events is enough to make sure that these statements are false. Bashar al-Assad first held municipal elections, and then a referendum and legislative elections. All observers in one voice said that the elections were fair. The number of participants was more than 60%, despite the fact that the West called them a "farce", and the armed opposition, which it supports, prevented citizens from coming to the ballot boxes in the four districts that it controls. At the same time, the armed opposition has multiplied military operations not only against security forces, but also against civilians and all that relates to culture and contributes to the peaceful coexistence of religions. First, they killed the progressive Sunnis, then the Alawits and Christians, to force their families to leave these places. They burned more than one thousand five hundred schools and churches. In Baba Amr, they proclaimed an independent Islamic Emirate and established in it a revolutionary Tribunal, which sentenced to death more than 150 people who were publicly executed one by one by the executioner. And this is not just a pitiful performance of several political outcasts united in a national Syrian Soviet in exile, proclaiming a democratic-looking project that has nothing to do with the crimes of the free "Syrian" Army, which cannot hide the truth anymore. In addition, who would have thought that the secular Syrian regime, whose exemplary nature was only recently confirmed, would turn into a religious dictatorship, while the free "Syrian" Army, supported by Wahhabi dictatorships of the Persian Gulf and preceptors, would be exemplary of democratic pluralism?

Statements by US officials about possible international intervention in Syria, bypassing the UN, just as NATO dismembered Yugoslavia, are causing concern and anger in Moscow. The Russian Federation, which has so far held a defensive position, has decided to take the initiative. This strategic turn is due to the extreme situation from the Russian point of view and the favorable changes in the situation in Syria [4].

Moscow proposed to create a contact group on Syria, which would bring together the interested states, that is, simultaneously neighboring states, regional and international powers. We are talking about establishing a dialogue forum instead of the existing militant mechanism introduced by the West under the Orwellian name of the “Conference of the Friends of Syria” Russia continues to support the Annan Plan, which in fact represents a slightly modified plan presented by Sergey Lavrov of the Arab League. She regrets that this plan is not supported and places the blame on the opposition faction, which does not let go weapons. According to A.K. To Lukashevich, one of the press secretaries of the Ministry of Foreign Affairs, the Free "Syrian" Army is an illegal organization in terms of world law. And although she daily kills Syrian soldiers from 20 to 30, she is publicly supported by NATO and the Gulf countries in violation of the Annan Plan [5].

Speaking as a fighter for peace in the face of NATO sowing war, Vladimir Putin proposed the CSTO to be ready to deploy "blue caps" in Syria, at the same time in order to dissolve the Syrian belligerents and overcome foreign forces. Nikolai Bordyuzha, the CSTO Secretary General, confirmed that he has 20 000 people to carry out this mission and are ready to start it at any moment [6].

For the first time, the CSTO announced the deployment of peacekeeping forces outside the former Soviet space. Hurt by the living, Secretary General Ban Ki-moon tried to thwart this initiative by immediately proposing to organize a contact group.

By bringing together the sanctions working group of the Conference of the Friends of Syria, US Secretary of State Hillary Clinton ignored the Russian proposal and reaffirmed her commitment to changing the Syrian regime [7].

In Turkey, the parliamentary opposition visited the camp of Syrian refugees. The parliamentarians noted the absence of more than a thousand refugees registered by the United Nations in the main camp, while another noted large stocks of ammunition and military equipment. Then they sent a request to Prime Minister Recep Tayyip Erdogan with a request to provide data on humanitarian aid allegedly provided to refugees. Deputies believe that the refugee camp is only a cover for a secret military operation. In fact, it contains militants, mainly Libyan, who use it as a rear base. The deputies suggested that these are the very militants who perpetrated the massacres in the administrative district of al-Hula.

In Saudi Arabia, there is again a gap between King Abdullah and the Saudi clan. At the invitation of King Abdullah, the Council of Ulamas published a fatwa that states that Syria is not a territory of jihad. But at the same time, the Minister for Foreign Affairs, Prince Faisal, called for the opposition of the “Alawit usurper” to be armed.

June 7 Day turned out to be eventful. While Ban Ki-moon and Navi Pillay, respectively the UN Secretary General and the High Commissioner for Human Rights, expressed their complaints about Syria in the UN General Assembly, Moscow carried out two successful launches of intercontinental ballistic missiles.


Colonel Vadim Koval, head of the press service of the Strategic Missile Forces, acknowledged the successful launch of the Topol rocket launched from the Caspian test site, but did not confirm the launch of the Mace from a submarine in the Mediterranean. Nevertheless, this launch was observed from the entire Middle East from Israel to Armenia, and there are no other weapons that could leave such a mark in the sky [9].

The message is clear: Moscow is ready for a world war, if NATO and the countries of the Persian Gulf do not comply with the international obligations defined by the Annan Plan and continue to support international terrorism.

According to the information we have, this warning shot was agreed with the Syrian leadership. Just as Moscow supported Damascus in liquidating the Islamic Emirate Baba Amr immediately after the power of President al-Assad was confirmed by a constitutional referendum, it also supported the liquidation of mercenary militant groups operating in the country immediately after the election of a new Parliament and a new Prime Minister -min An order was issued to move from defense strategy to offensive actions to protect the population from terrorism. The national army thus proceeded to attack the bastions of the free "Syrian" Army. The upcoming battles will be difficult, especially since the mercenaries have mortars, anti-tank shells, and now land-to-air missiles.

To reduce tensions, France immediately accepted the Russian proposal for participation in a special contact group. Washington urgently sent Frederick Hof to Moscow. Despite the statements made by Secretary of State Hillary Clinton on the eve, Mr. Hof nevertheless accepted the Russian proposals. There is no more time to whine about the spread of hostilities in Lebanon or to talk about the possible spread of the conflict throughout the region. During the 16 months that destabilized Syria, NATO and the countries of the Persian Gulf created a hopeless situation that could now turn into a world war.

[1] The main events in the activities of President Putin:
May 7: Vladimir Putin’s Assumption of the Presidency
May 8: the appointment of Dmitry Medvedev as prime minister
9 May: Celebration of Victory over Fascist Germany
May 10: Visit to the Russian military-industrial complex
May 11: Welcome to the President of Abkhazia
May 12: Welcome to the President of South Ossetia
14-15 May: Informal Meeting with CSTO Heads of State
18 May: Visit to the Cyclone Defense Research Institute
25 May: Acquaintance with Nuclear Submarines
30 May: meeting with responsible representatives of the Ministry of Defense
May 31: Meeting of the Russian Security Council
4-7 June: visit to China, SCO summit
June 7: a visit to Kazakhstan and the launch of a Topol rocket