December 30 2018
119
In the last material of a new series of articles in the series "Ancient Civilization" ("Homer's Poems as historical source. Ancient civilization. Part 1 ”) it was a question of how much the study of Homer helps historians and the connection of its texts with the finds of archaeologists. Logically, the second material should be devoted to the excavations of Heinrich Schliemann and Arthur Evans, but it so happened that among the last articles came out material about the capital of Croatia, Zagreb. And in Zagreb there is a beautiful Mimar Museum, the official name of which is: “The Art Collection of Ante and Viltruda Topić Mimara”, and this is an art collection of a very high, one can say without exaggeration, world-class level. And just there is one unique antique statue, which you just can not help but mention (and not tell) if we are talking about the ancient Greek culture. This is the so-called “Croatian Apoxyomen” - a bronze sculpture depicting an ancient athlete cleansing his body after a contest. Such sculptures were called Apoxyomenos (from the word "Scraper"), and their plot is more than banal and was an illustration of one of the most common elements of ancient Greek culture: the figure of an athlete was depicted at the very moment when he scraped with a special scraper, which the Romans called the strigil skin adhering to her sand, mixed with fat, which was customary to oil the body before any sporting event. 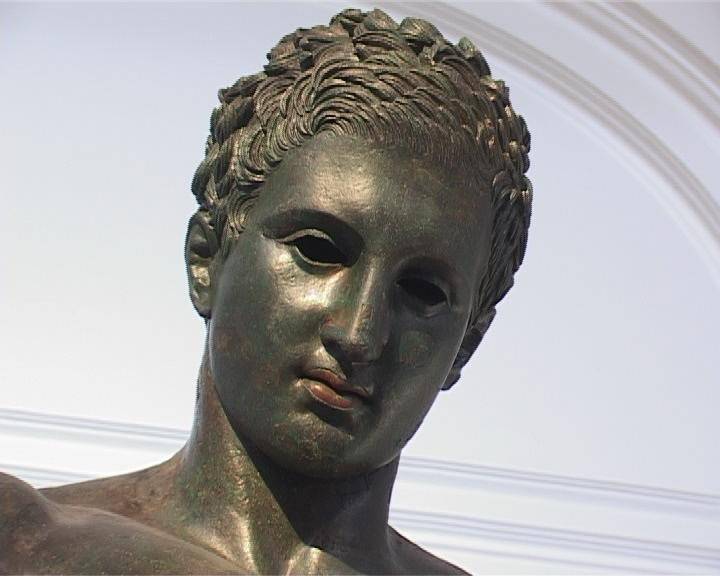 It is believed that the most famous sculpture of the Apoxyomen in the ancient world was the statue of Lysippus from Sikion, the court sculptor Alexander of Macedon, whom he sculpted from bronze around 330 BC. Its bronze original was lost, but in his Natural History Pliny the Elder wrote that the Roman commander Marcus Vipsanius Agrippa staged this masterpiece of Lysippus in Rome in the Baths of Agrippa, around 20 BC. It is amusing that the emperor Tiberius was so carried away by the sight of this sculpture that he even removed it to his bedroom. However, the people of Rome did not like this. During the gladiatorial battle, which was attended by the emperor, there were shouts: “Bring us back our Apoxyomen” and the emperor replaced it with a copy. 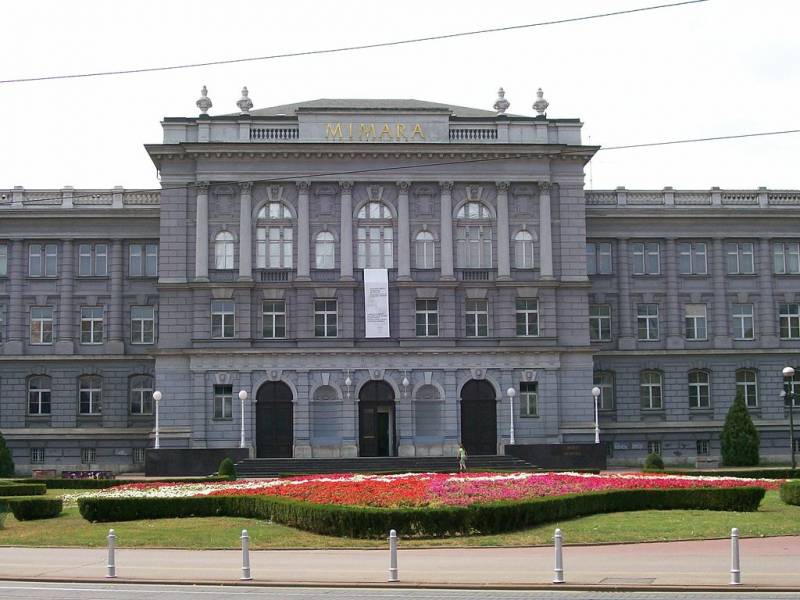 Pliny also mentioned that sculptor Policlet, or one of his students, made a similar statue. So it turns out that two sculptures were created on this topic, and maybe in fact they were much more. For example, in 1896, where ancient Ephesus was located in Turkey, we found a bronze statue, which is now in the Kunsthistorisches Museum in Vienna. And it is so good that experts cannot decide in any way that it is a copy or an original. Fragments from different Apoxyomenes are kept in various museums, so it is quite possible that this was the most popular statue of antiquity. There is a “head” that is kept in the Hermitage; another bronze head is in the Kimbell Art Museum (Fort Worth, Texas). The famous Vatican Apoxyomenon, which changes a pose, is probably an option from the original Lysippos. 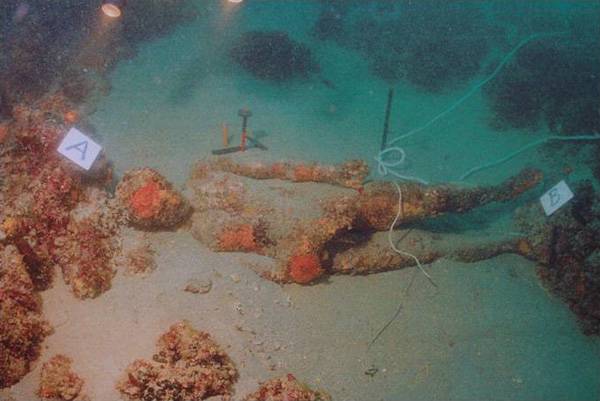 Sculpture at the bottom of the sea

And then it was that 12 July 1997, a Belgian diver Rene Wouters spent his holidays in Croatia, in Istria (which once again characterizes him as an intelligent and practical person!), Dived deeper and saw the body lying on the bottom at 45-meter depth! Later, he told me that his hair stood on end with horror, and he literally jumped out of the water to the surface. But curiosity overcame fear, and he plunged a second time. And having plunged, he saw a statue half-soaked with sand and covered with algae and shells in the height of a man who looked so realistic that he took her for a corpse. Now he was able to inspect all the found statue. Everything was in place: both hands, legs, and head — it turned out that nothing had been lost. However, touching the head, he realized that it was not attached to the body, but was located on a ledge of a rock, although very close to the torso. The height of the sculpture, as it was measured later, was 192 cm. 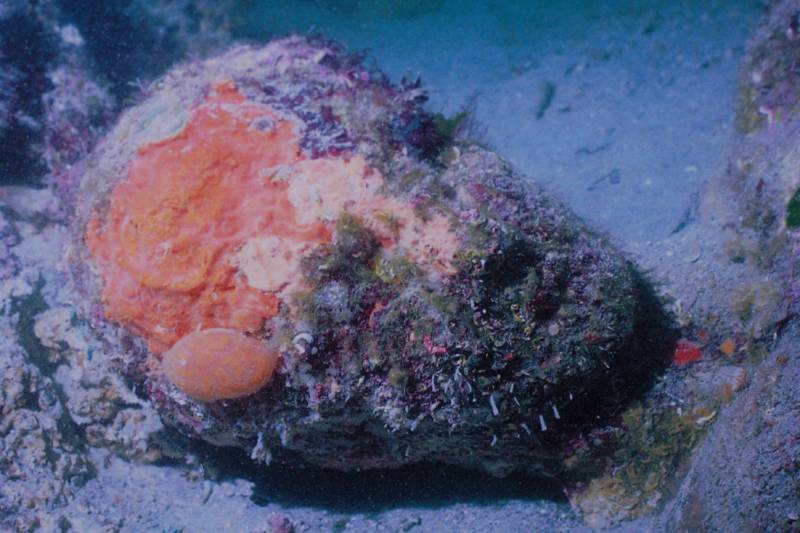 Head at the bottom of the sea

It is clear that the diver said “where it is necessary” that the statue was examined by experts, but they could only raise it to the surface in April of 1999. Moreover, a special expedition explored the bottom around the site of the find for the detection of something else, say, a place of possible shipwreck, but found nothing except for a bronze base with an ornament in the form of a meander. Well, the base apparently broke off from the statue when it fell into the sea. That's just how she fell into him, where she fell from and why she fell - these are questions to which we will never get answers. On the other hand, there are no answers - but there is a statue! 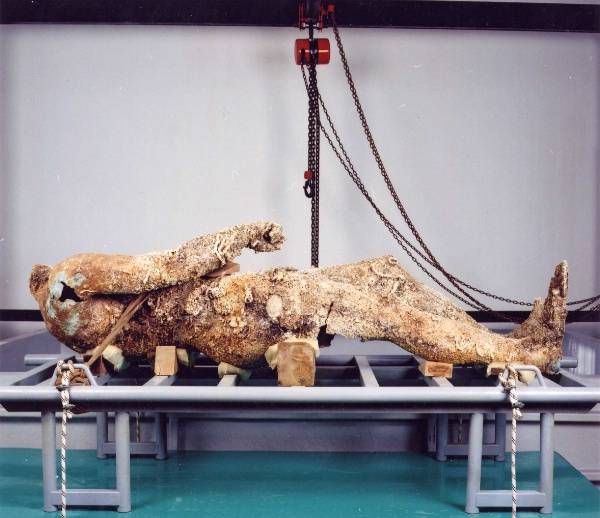 Figure extracted from the bottom

However, it turned out that the found sculpture needs a very serious restoration, as its rear surface, which was directly lying on the sand, suffered quite strongly. Here, the front was mothballed by a layer of shells that covered it, and they, the shells, kept the “noble patina” covering it from the effects of sea water, which naturally protects all bronze objects from the destructive effects of oxygen. 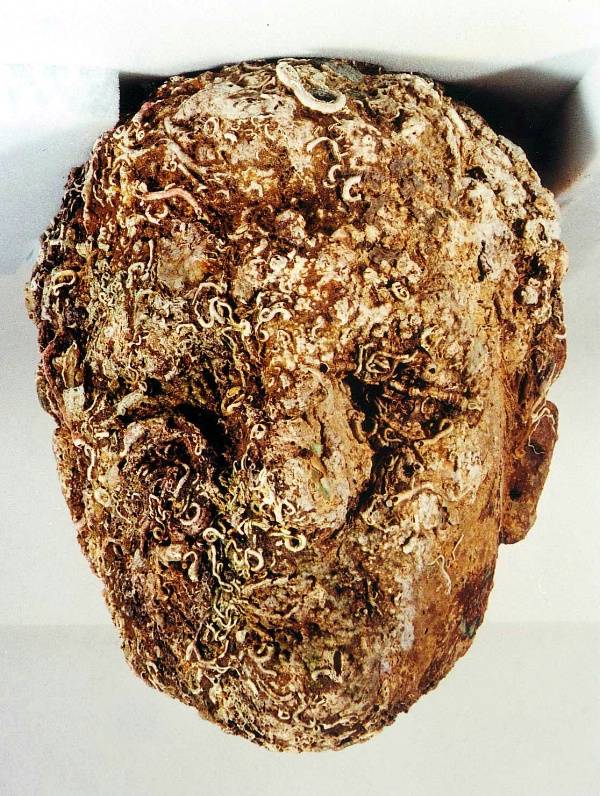 Simultaneously with the work on the restoration of the statue, studies were conducted on the composition of its metal and the technology of its manufacture was studied. It turned out that it was made of seven separate parts, separate manufactured legs and arms, the torso itself, the head, the genitals, and, of course, the base. After all of them were connected into one whole, the holes formed in some places were stained with additional metal parts. 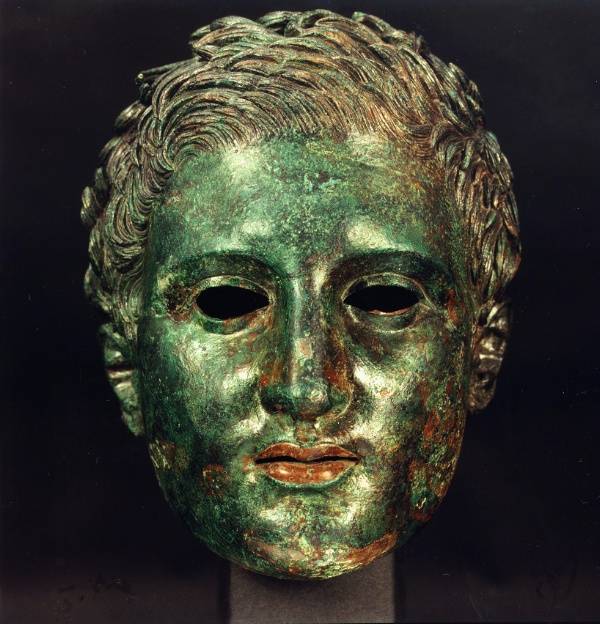 Most of the analyzes were carried out in the scientific laboratories of Florence and also at the Croatian Institute for Heritage Conservation. They were attracted, as is now universally practiced, by specialists from various fields, including physicists, chemists, and even biologists. For example, biologists, having conducted research "also said their word": it turns out that small rodents dwelled inside this statue for some time and even built a nest there. Since the presence of the biological material of these rodents belongs to the I-II centuries AD, it was concluded that even then the statue was clearly damaged and undoubtedly lay on the ground. That is, at sea, she had not yet drowned. But does that mean she drowned later? And here's another question - who was the manufacturer and who was the customer of this sculpture? 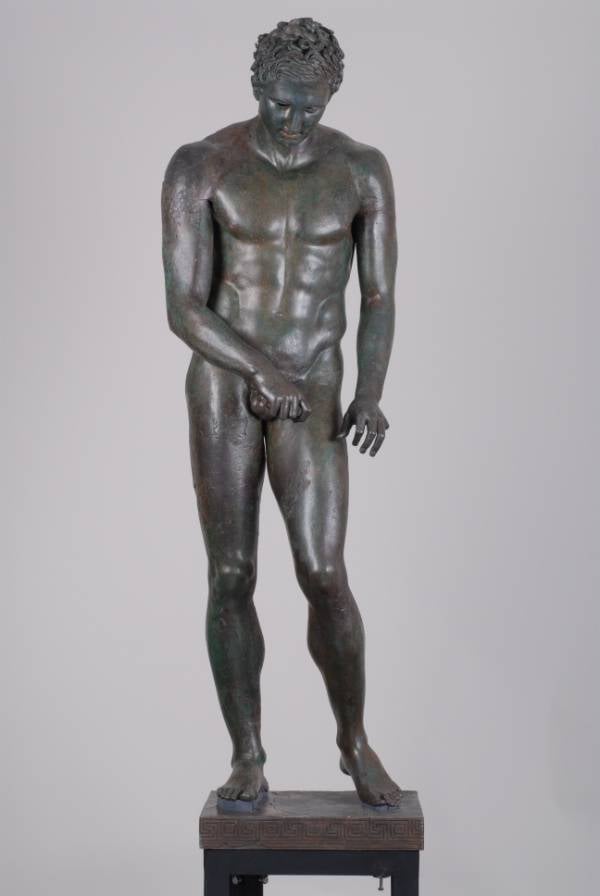 The same question is constantly being asked and looking at the marble sculpture of Apoxiomen stored in the Vatican: wasn’t it made from the figure of Lysippos' creation? And, it is believed that yes - with his sculpture. Here is taken into account the characteristic dynamism of his works, characteristic of the era of the IV century BC, and the similarity with such statues as "The Young Man from Antikytheras" and "Athena from Piraeus". Well, and besides, this marble copy is truly unique, because it is not repeated in Roman copies. 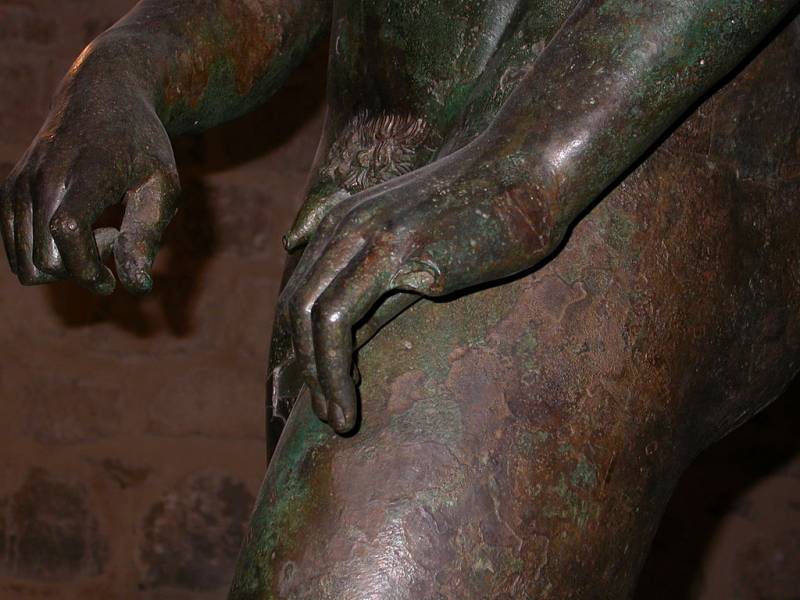 But the bronze statue, found in Croatia, just shows us a characteristic type of athlete, known for many Roman copies. So back in 1886, the “Apoxyomen of Ephesus” was found, which is stored in Vienna. But the question arose, and what, strictly speaking, he does, because strigil was lost from her. A statue from Croatia gives an answer to this question: with his right hand the athlete squeezes the handle of the strogil, but with the left holds his end, as can be seen from the position of the fingers of his hands, although the strigilla itself has not survived in this statue. True, much more in this statue does not coincide with the figure and marble. 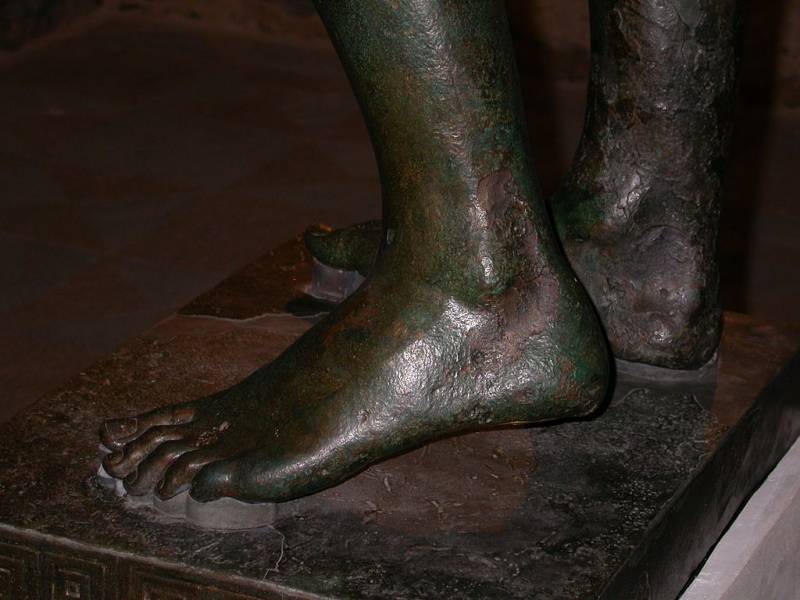 Sculpture legs and base

It is interesting that in the alloy of the Croatian statue there is very little lead, which is typical for the alloys of the 4th century BC, than the later alloys of the Hellenistic or Roman times. The casting itself is of poor quality, with many cracks and seams. Having a good wax model, it was possible to make several copies, and scientists assume that a higher-quality casting was already made from the same model. Naturally, the question arises whether it is the Apoxyomenon of Lysippos himself. He has carefully crafted hair, and the size of the head is smaller than those that were the benchmark for the 4th century BC. Although his physique is “stronger” than other sculptures and his right arm is somehow awkward. Maybe this is the author's copy or one of his experiences? Who knows? 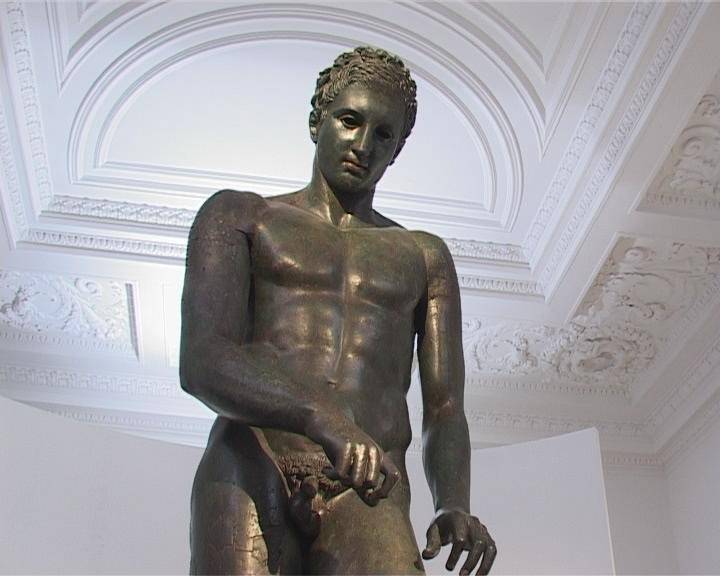 Here he is, handsome!

In 2015, a large-scale international exhibition project “Power and Pathos” was held, dedicated to the bronze sculpture of the Hellenistic world. Once again it was noted that no other type of Greek sculpture reached us in three bronze copies at once, two of which are statues in full growth, supplemented also by several marble copies. That is, for some reason, this sculpture was especially popular, and in Greece, and in Rome! And we can assume that all three bronze sculptures were made in the Eastern Mediterranean, but the marble ones were made in Italy. Whatever it was, and the Croats are now very proud that they also have their own Apoxyomenon, with very good quality. 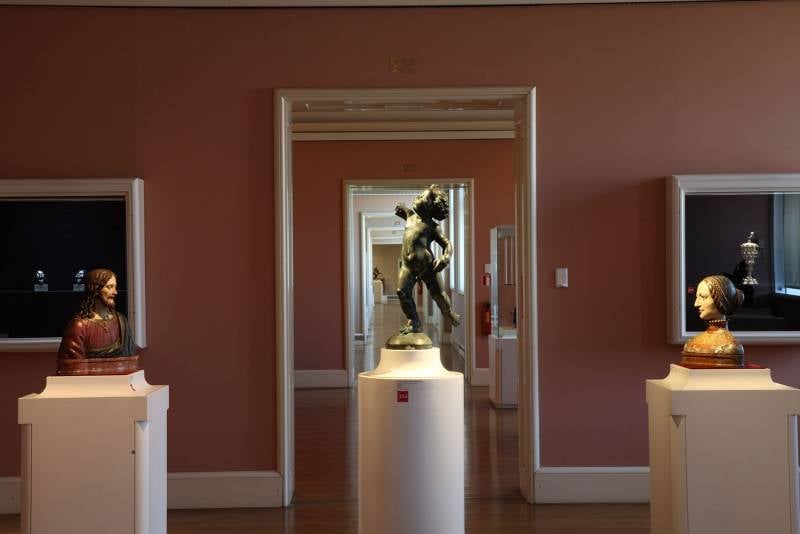 However, there are many other interesting exhibits ...