The game of "cat and mouse" on the Black Sea theater has begun. Can we cope without the anaerobic "killers" of the CUG project 677?

December 19 2018
210
Just the day before yesterday, when the Coast Guard patrol boat “TCSG29” of our “Turkish friends” was calmly escorted, as well as the humble silence of official Ankara, the ship of the Royal Navy's hydrographic reconnaissance ship entered the Black Sea under the cover of twilight. fleet Great Britain HMS “Echo” (H87), whose main goal is far from being officially announced to the media as “ensuring freedom of navigation in the region”, and a detailed mapping of the bottom topography of the shallowest northwestern sections of the Black Sea through modern active sonar systems to facilitate the detection of diesel -electric submarines pr. 636.3 Varshavyanka by British anti-submarine frigates of the Duke class and American multipurpose destroyers of the URO Arleigh Burke, which will advance into the region at the beginning e next year. 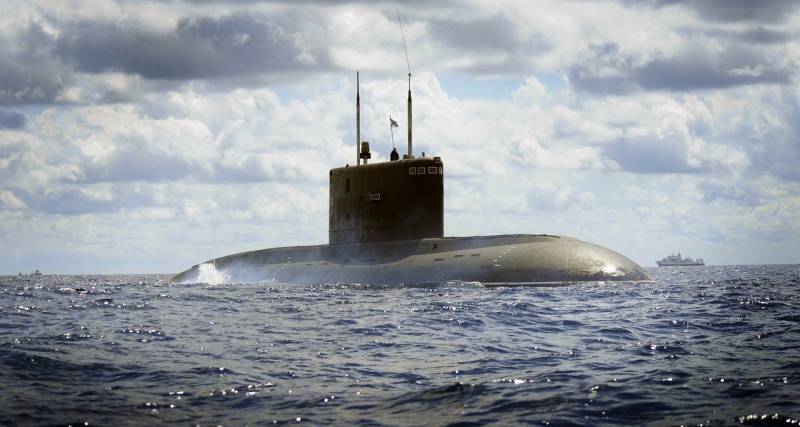 The HMS “Echo” passage through the Dardanelles and the Bosphorus took place without the usual noise and dust (as it usually happened when the surface ships of the 6 of the US Navy Operational Fleet entered), and therefore our mass media began to publish news about an 18 hour late. And the main reason for this is not so much the fact of the “Echo” crossing the straits at night, but the silence of the event by official military-diplomatic sources, and perhaps the requirement for local media to keep their mouths shut. This fact is not surprising, because literally a couple of days before that, Mr. Erdogan quite unexpectedly announced to everyone that the contract for the supply of multi-purpose 5 F-35A Block 3F F-120A Block 100F “Lightning-II” fighters to the Turkish air force viable, and Ankara is looking to get 2 machines of this type, while the original terms of the contract between Lockheed Martin and the Turkish government through foreign military sales included the supply of an 4 fighter y "Lightning-400". Consequently, the contract with Rosoboronexport for the supply of the Turkish army 35 of the C-20 anti-aircraft missile system Triumph suddenly ceased to be a stumbling block in the execution of the purchase of American F-XNUMXA; Plus, before the Turks also loomed a bonus in the form of an increase in the number of machines purchased on XNUMX units.

And here a completely adequate question arises: for which “buns” from the Turkish leadership did the US State Department and the White House again give the green light to further fulfill the contract, and even with the impressive F-5A links in the form of 35? The answer here is one. We are talking about giving the US Navy and the Royal Navy of Great Britain complete freedom of action in the Black Sea (including unimpeded traffic of individual and also surface combat ships of NATO Naval Forces) for a period of possible large-scale conflict in the Azov-Black Sea region. Moreover, in the event Moscow claims to Ankara about aiding the “arbitrariness” of the US and British fleets in the Black Sea region, the Turkish side can easily argue their actions by complying with the key provisions of the Montreux Convention even if they are regularly violated by the North Atlantic Alliance. What else could be expected from the corrupt environment of Recep Erdogan ... However, the situation with the "idlib gaddyushnik" demonstrated everything.

We are now much more concerned about the acoustic secrecy of the underwater component of the Russian Navy’s Black Sea Fleet from hydroacoustic complexes deployed both on the HMS “Echo” hydrographic reconnaissance ship and the Duke 23 anti-submarine frigates, and on missile control destroyers weapons class "Arleigh Burke". Considering the fact that diesel-electric submarines of the 636.3 Pr. Varshavyanka have a noise level of the order of 48 — 52 dB with a natural background in 45 dB, and the small geographic size of the Black Sea allows them to operate in almost the whole water area on a quiet run (2 —4 node) and timely reach the launch of 533-mm torpedoes UGST “Physicist-2” with a radius of 50 km on NATO naval ships, it will be extremely difficult to reveal their location even by means of “Bulb” sonar systems AN / SQS-53C. An even more challenging task will be the direction finding of Varshavyanok from a distance of more than 150 — 200 km, from where they can easily use 3-xxx high-maneuverable XRUMXX3E Caliber-PL missiles, which are capable of penetrating the “Sea Umbrellas” of outdated shipboard SIRS of the Sea Wolf. on frigates such as "Duke".

But there is a negative point. These submarines are equipped with standard diesel-electric power plants, which require an ascent to the surface every 24 hour to recharge lead-acid batteries in the RDP mode. Even despite the fact that the submarines of 636.3 Ave., given the geographical advantages of the Black Sea, have the ability to recharge batteries in areas covered by the Crimean anti-aircraft missile divisions of the C-400 Triumph, their launch into the RDP and the launch of diesel generators will inevitably mean snorkel detection using AN / APY-10 airborne radars in the reverse synthetic aperture mode (ISAR), detection of diesel fuel combustion products using gas analyzers, or direction finding of infrared radiation from combustion products I use diesel fuel via the IR channel used by the MX-20HD optical-electronic complexes. All this equipment is available to the P-8A "Poseidon" antisubmarine aircraft. After that, the Poseidon can place several active-passive radio-hydro-acoustic buoys at once in the areas of the intended passage of the Russian diesel-electric submarines after the end of the recharging process and access to the open sea. Naturally, in this situation, the beginning of the support turns into a very real scenario with all the ensuing consequences.

This problem could be eliminated by adopting the 4 separate submarine brigade of the Black Sea Fleet for even more low noise and advanced anaerobic submarines of 677 Avenue Lada, which are able to stay under water for more than 15 — 20 days thanks to the use of a fundamentally new air-independent power plant, represented electrochemical generator, operating due to the reforming of diesel fuel. But today, despite a completely objective assessment of the parameters of the brainchild of the Admiralty Shipyards by numerous analytical RuNet portals, it can be stated that we will not have time to use these silent "KUG Killers" in the impending military clash in the Black Sea A related type submarine is the B-585 "St. Petersburg" in a standard diesel-electric version.