The thought of the modern working class (part of 2)

December 15 2018
77
My uncle of the most honest rules:
His farm strictly rules

Buckwheat sowed, flax and rye,
I did not take someone else, but - do not touch
His bastard wealth ...
He revered blasphemy
There is fresh bread, stale food.
For what praise and honor to him.
And his brother, I will not hide from you,
It was completely different.
He wanted to build a farm here
And become a dairy farmer.
(E. Permyak. “Humpback Bear”)

Last time we stopped at the fact that even in Shushenskiy V.I. Lenin began work on the book "The Development of Capitalism in Russia" and, returning from exile, even published it, and quite legally, in St. Petersburg. And no one attracted him to it for anything, although, in fact, why was it attracted? Another study proving that the populists are wrong. That capitalism is developing in the country and ... what's wrong with that? Speech about the need for the overthrow of state power, the author did not keep it, stated the facts, so the censorship was not opposed. And the work really turned out to be very interesting. The fact is that in Russia, for some reason, statistics were very much loved at that time. Statistical reports were regularly published on the pages of various "Provincial Heralds", and they reported the number of arable and steam lands, clamps and carts, the cost of the heel of eggs in the Vyatka and Orenburg gubernias, the number of otkhodniki who had proceeded to Siberia after the Stolypin reform (we ran a little ahead, but it was after the release of the work of Lenin), proceeded along the Volga-Vyatka railway through Penza (including minor children) and the number of those returning from there, in a word, the pre-revolutionary statistics of Russia are Ala about Russia everything! And here, on the basis of a mass of statistical data, Lenin took it, and showed that all the populist theories that capitalism in Russia is an “artificial phenomenon” are inappropriate, since they ignore the social division of labor. 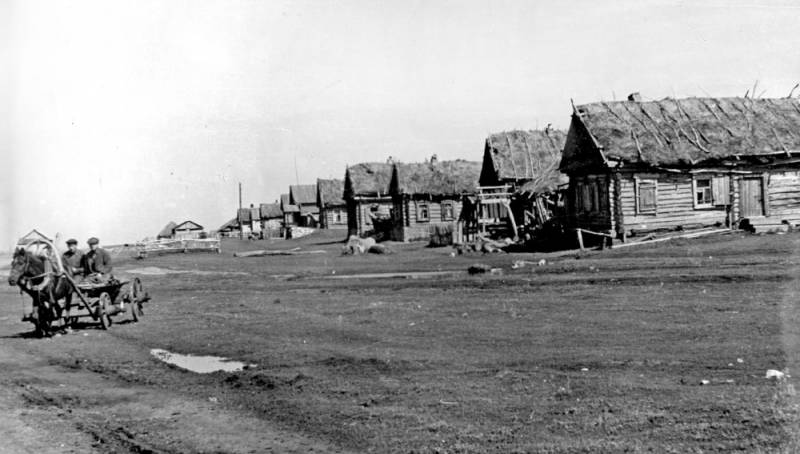 Pre-revolutionary village of the Samara province.

And then he began with an analysis of relations in the village, where capitalism had also already won, although the Narodniks, with foaming at the mouth, argued that the peasant community was the main unit of society in Russia. And in this, they were just right, since it was pointless to deny the communal character of the mentality of the Russian peasantry. But ... “the flies are separate, and the cutlets are separate!” And here too: the mentality is a mentality, and the unevenness in the distribution of crops also did not go anywhere. Lenin, relying on statistical data, proved that ⅖ of all households (including ³ ∕ ₁₀ population) had about ¹ ∕ пос of all cultivated land, and belonged to the poor group, which did not have enough income from their peasant labor. Then came the middle peasantry, which also occupied about ⅖ yards, to which there was enough land and income from it. And finally, the peasantry went on further (about ⅕ yards and ³ ∕ ₁₀ all the population of the empire), which had more than half of all the crops in their hands, and the yields of this layer were such that their “commercial” character was clearly visible. Moreover, the more land there is in the yard, the greater the market% of the grain produced! These peasants themselves could not cultivate this land and hired agricultural workers like American farmers. So, in the "three northern counties of the Tavricheskaya lips. the prosperous peasantry employ, according to the author, more than 14 thousands of rural workers. On the contrary, the poor peasantry “let go of the workers” (over 5 thousand), that is, it resorts to selling its labor force, since income from farming gives, for example, in the group with 5-10 dess. sowing only about 30 rub. money in the yard. That is, in the village there has already been a process of social stratification. The rural proletariat has already arisen, there is already a market - that is, capitalism in the countryside has practically completely won. 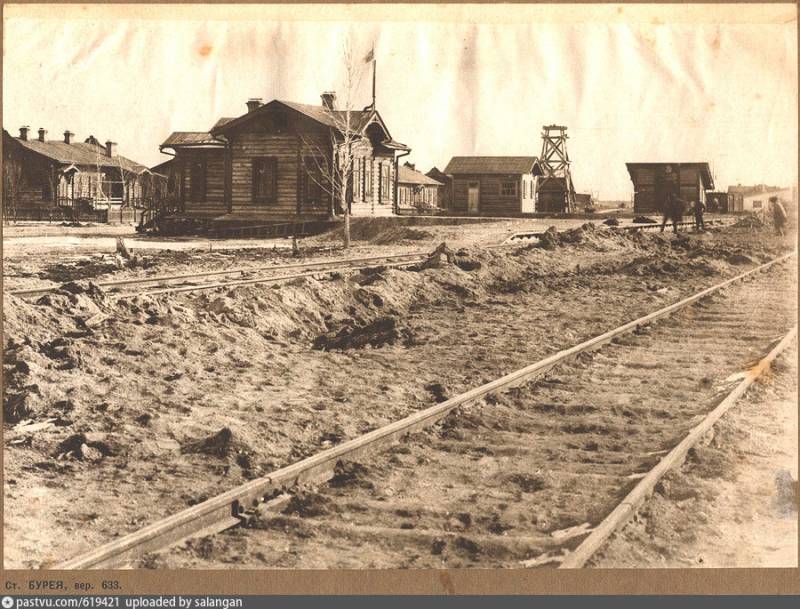 Having considered the village, Lenin turns to its influence on the city. First of all, he calls the three main forms of industry, differing in the different ways of their technology. This small-scale production, existed almost from time immemorial. Then the manufactory, which turns the peasant into an artisan, and finally - industrial, market production.

And then he had a very interesting thought: “The“ instability ”of the large machine industry has always caused and causes reactionary complaints from people who continue to look at things through the eyes of a small producer and forget that only this“ instability ”has replaced the former stagnation with the rapid transformation of production methods and all public relations. " That is, it turns out that stagnation is ... "confidence in the future," the very confidence that those who pray for the USSR so frustrate today as the holy icon so lament. Because, yes, confidence is not bad, and even very good. That's just in competition with the "insecure", "confident" for some reason lose, and why lose it is clear - they are afraid. And a paradoxical situation emerges: when “there is little confidence” is bad, fear paralyzes people. But when there is a lot of it, this is also bad. In society, stagnation begins and, as a result, this very “society of stagnation” loses to “society of instability”. That is, complaining about the instability of a large-scale machine industry means complaining about ... social progress, which can be fast, and maybe even slow!

Further, Lenin writes: “There is no doubt that the capitalist factory puts these categories of the working population (meaning people from the village, low-skilled workers, as well as women and adolescents — VO) in a particularly difficult situation, that in relation to them reduction and regulation of the working day, the provision of hygienic working conditions, etc., but the desire to completely ban the industrial work of women and adolescents or support the patriarchal structure of life that excluded such work would be reactionary and utopian nym. Destroying the patriarchal isolation of these categories of the population, who had never left a narrow circle of domestic, family relations, attracting them to direct participation in social production, the large-scale machine industry pushes their development forward, increases their autonomy, i.e. are incomparably higher than the patriarchal immobility of pre-capitalist relations. ” That is, if we want to destroy patriarchal relations in society, it means that women and children should be involved in the work. Therefore, as patriarchalism, it is stagnant, and the “stagnant” are overtaken by the “non-stagnant” ones, and there already is not far to the 1991 year! That is, you need to go along the "razor blade", and here it is equally dangerous to roll both "left" and "right". 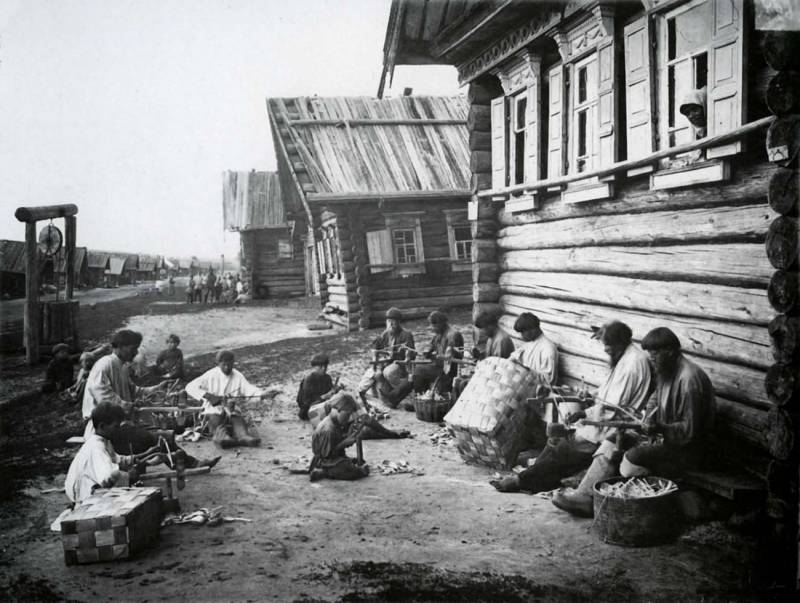 How large was the number of outgoing non-agricultural workers in Russia? "Lenin, based on passport control data, reports:" The number of workers employed in all sorts of similar work is not less than 5 - 6 million. And then, arguing with other authors — Lenin generally liked to write his works in a polemical manner — he writes that the “farmer” was more literate, more cultured, and more developed than settled Kostromiach in some “forest” districts. Like the diversion of the population from farming to the cities, non-agricultural waste is a progressive phenomenon. He pulls people out of abandoned, backward, forgotten history the backwaters and draws him into the maelstrom of modern social life. It increases the literacy of the population and its consciousness, instills cultural habits in it. 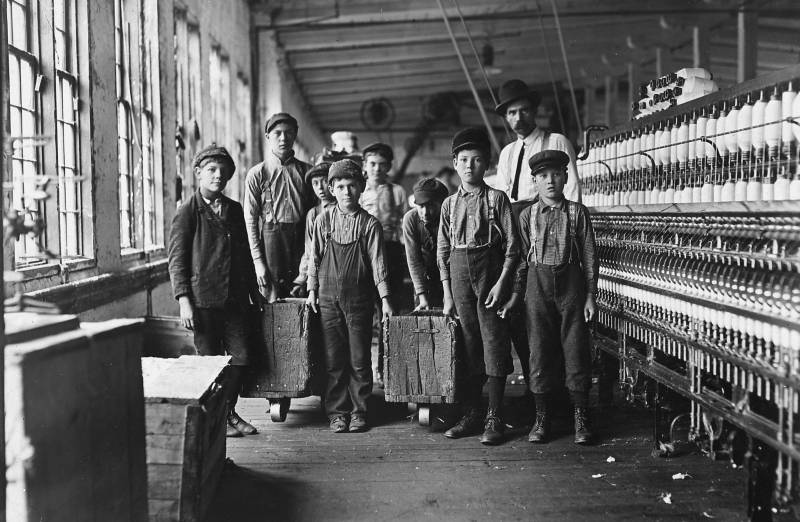 The work of adolescents in the factory.

Here they are - the future revolutionaries, the builders of the new world. "We will destroy the whole world of violence, to its foundations, and then, we will build our new world, - who was nothing, that will become everything ..."

“The departure to the cities weakens the old patriarchal family, puts a woman in a more independent position, equal in rights with a man. “Compared with settled areas, the Soligalic and Chukhloma family” (the most distant districts of the Kostr. Guba) are much less strong not only in the sense of the older patriarchal power, but even in relations between parents and children, husband and wife. From sons sent to St. Petersburg from 12 years, of course, one cannot expect a strong love for parents and an attachment to parental shelter; unwittingly they become cosmopolitan: “where it is good, there is the fatherland”. ” “Having become accustomed to doing without male power and help, the Soligalian woman is not at all like a farmer who has been slaughtered by an agricultural belt: she is independent, independent ... Beating and torturing women here is a rare exception ... In general, the equality of a woman with a man affects almost everywhere and in everything” - quotes He is an article from the journal "Legal Bulletin", 1890, No. 9, p. 142. 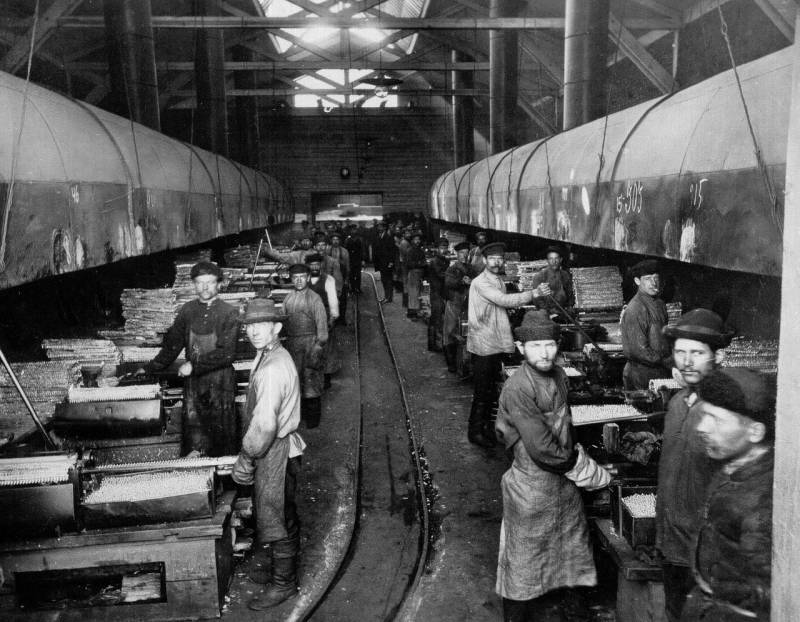 And here is another excerpt from the journal material cited by V.I. Lenin in his work: “A flaw” (in the workers) “is always complete, and the reason is that the suburban population is spoiled, they work in the workshops of the railways, and serve there. The proximity of Kaluga and the bazaars in it constantly gather nearby residents for the sale of eggs, milk, etc., and then indiscriminate drunkenness in taverns; the reason is that the whole population is committed to a great salary and doing nothing. Living in rural workers is considered shame, and they are striving to the cities, where they make up the proletariat. ”

Well, how many workers were there in Russia at the turn of the twentieth century? Lenin also made this calculation: 1) agricultural wage laborers. Their number is about 3 1 / 2 million (in Heb. Russia). 2) Factory, mining and railway workers - around 1 1 / 2 million. Total five million professional hired workers. Further, 3) construction workers - about 1 million. 4) Workers engaged in forestry (logging and initial processing, smelting, etc.), engaged in earthworks, railway construction, work on the loading and unloading of goods and all sorts of “black” work in industrial centers. They are about 2 million. 5) Workers employed by capitalists at home, as well as employed in manufacturing industries that are not counted as “factory industry”. They - about 2 million. Total - about ten million wage workers. We exclude from them approximately 1 / 4 for women and children - 7 1 / 2 remains million of hired workers from adult men. 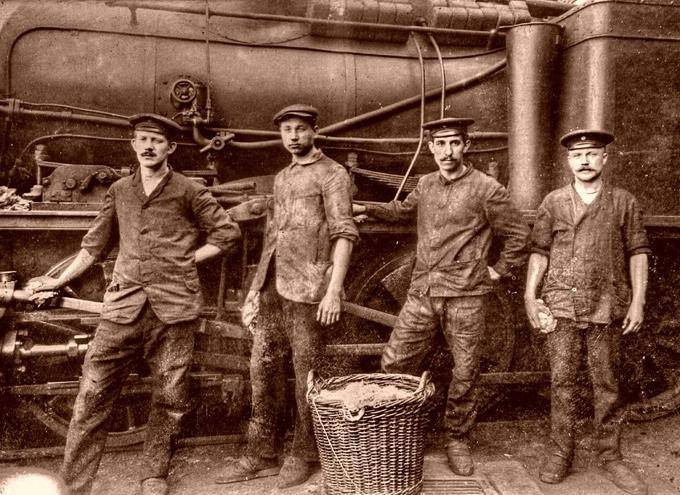 The workers of the locomotive depot in 1917 year - the elite of the proletariat, by the way!

Well, the conclusion from all this will be quite original. Capitalism is bad, but it's good because it destroys the patriarchal region, which is even worse. People’s complaints about “insecurity in the future” (the instability of the machine industry) are reactionary, because they are petty-bourgeois in their essence. The work of women and adolescents in the industry without providing social guarantees is bad, but good, because it weakens the old patriarchal family, that is, again it destroys patriarchal relations. Such is the Marxist-Leninist dialectic!

Well, now we can only recall what patriarchal relations in the village are and what mental features of being were associated with them. And the best thing to do is (in my opinion), after re-reading Yevgeny Permyak’s book “Humpback Bear”, a very lyrical and sometimes funny story of a boy from the “middle class” who eventually came to the revolution. There are a lot of life observations and interesting descriptions, and even some poems, which seem to have been written as a young hero of this novel ...

Author:
Vyacheslav Shpakovsky
Articles from this series:
The thought of the modern working class (part of 1)