The thought of the modern working class (part of 1)

There would be vodka, and vodka would have a sip,
Everything else is tryn-grass.
(Song of the anarchists from the movie “Optimistic Tragedy”)

Not so long ago on the pages of "VO", as always, the controversy about Comrade Stalin went, and all that would be fine. After all, we are discussing historical crowned heads - from Cyrus to Caligula and from Heliogabalus to Robespierre, and others. Why not? On the contrary, any public discussion is useful because it allows to reveal the facets of human ignorance and the degree of mythologization of society. And here, alas, miracles come to light. For example, that the proletariat, that is, the working class, is still homogeneous in our country. That the Russian communist-revolutionaries were very unlucky with the people - at first he was illiterate by nature, and then became illiterate due to the death of all literate and "correct communists" during the Second World War, and so on. Not to mention some downright monstrous number of Trotskyists in the USSR, who in the most different years seduced the innocence of everyone else, and some, in fact, omnipotent and all-pervading. It is just right to call another cry on this topic "The world mafia of Trotskyists against the USSR", but I don't want to take away the crust of bread from others ... But it would obviously not hurt to talk about the working class, because here in the minds of many visiting "VO" there is simply complete confusion and vacillation.

To begin with, many people now like to talk about what, what, they say, today is the working class, when "all the factories are standing." But are they worth it? It is clear that the most recent matter is to refer in such complex matters to my own personal experience, as well as to the experience of friends, relatives, relatives of friends and friends of relatives, but I still consider some of the “on-topic” memories valid. In particular, this concerns my childhood memories of the working class, since they have not yet become “clouded” with any ideology.

I was born and grew up on Proletarskaya Street (Penza), which still exists today, although it has changed a lot. So, every morning I woke up from the tramp of my feet. People flooded the bicycle factory (the Frunze plant) in the morning and also returned in a flood after 17 hours. In the summer, by this time, my grandmother usually collected several buckets of fallen apples and carried them on plates to the bench at the gate to my grandfather sitting there. He had such a hobby - to sit on a bench and ... people walking by, came up to him and bought a bowl of apples. The grandmother did not appreciate, asked for 10-15 kopecks, and all the apples were sorted out very quickly. It was impossible to play on the street at that time: so many people passed through it. Later, at school, I learned that 40 thousands of people worked at the plant. They did there not only bicycles, but also weapon, but exactly which one did not know. They took us there and on excursions around the workshops, but showed only an electroplating workshop, assembly and woodworking, where we gathered ourselves excellent smooth wooden churches for shredding boats. 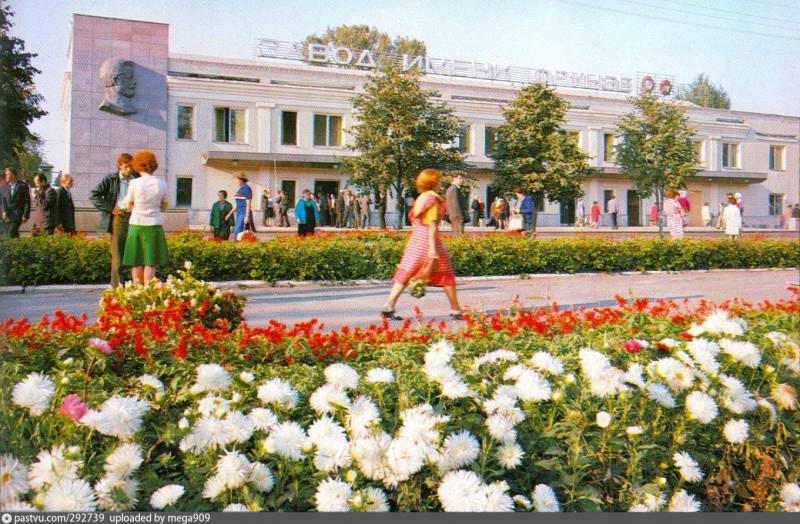 Checkpoint plant them. Frunze in the Soviet era, where these 40 thousands of men and women worked.

All the parents of my peers, boys, with whom I played, worked at this factory, and both fathers and mothers.

I was especially familiar with the family of the Mulins' neighbors, who lived from me through a fence in an old multi-family wooden house that looked like a rabbit hole. The family consisted of five people. Father, mother, old grandmother and two boys - the younger Zhenka and the elder Sasha. The first is younger than me, the second is a bit older. Two adults worked, and they lived like this: one big room, looking like a pencil case and divided into two halves by the stove, and cold, although large canopy. In front of this “pencil box” there were two windows and there was a chest of drawers, a one-and-a-half bed for the father and mother (and how they fit in there!), A wardrobe and a table, and also a bedside table and TV on it (after 1961). In the back there are two beds for boys and a chest for the grandmother. Well, and all the amenities were naturally in the yard. The food was cooked in the summer on a primus in the passage, and in the winter on the stove. Usually it was soup and fried potatoes. And that's it! Yes, on the walls under the wallpaper, they occasionally had small red bugs (I did not know that they were bugs), but when I told about them at home, I was strictly forbidden to go there. There were houses with better conditions - the house where the pilot of the local squadron lived, and there were even worse, for example, the house of “Sanka-snotty”, a boy with constant snot of bright green color, who was considered decent occasionally to slam over these snot. 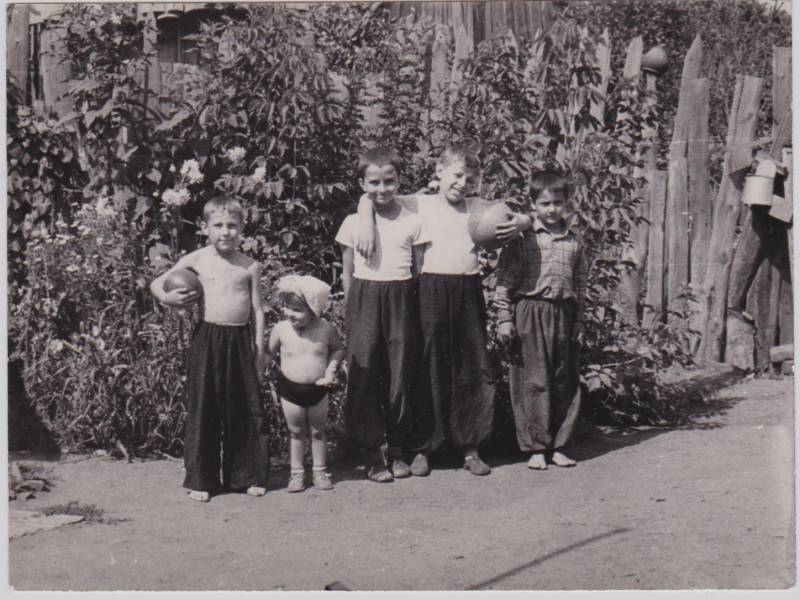 The author (in the center) and his comrades Mulina are Sasha and Zhenka (and the neighbor's girl), and also the boy Vitya (in a plaid shirt). Photo taken in the summer of 1962. By the way, behind the fence, the roof of the toilet is already visible in my yard - judging by its height, the construction was just monumental. Grandfather did not regret the boards! By the way, the picture was taken after all in the city, but ... in the photo is a real village with a washstand on the street and krynkami on the fence. We wear satin trousers and shirts. On his feet Vietnamese polukedy. Not everyone. In general, the typical inhabitants of Harlem ... Now even the gypsies are better dressed than we were then dressed - the children of Soviet workers and employees.

In these conditions, the Mulines lived up to the 1968 year, when, thanks to the Kosygin reform, workers began to build houses at the Mill, and their wages were raised to 320 rubles, so that it equaled my mother's earnings. And if earlier, when they came to my house, they envied me, now, having come to them in a new apartment, I was already envious of them. I especially liked the awful lacquered furniture made of chipboard, but at that time I did not know that it was awful, and considered this firewood the height of beauty and elegance.

What else did I know at the time about the workers? What periodically they get drunk and drunk lying around under the fence. Usually this happened on payday. I didn’t see anybody lying around, probably, just had no luck. But stumbling citizens met a lot.

Then in the fifth grade, when I got tired of learning how to do it, because my mother was in graduate school in Moscow, she explained to me that it is my duty to study well, and not “you will become a worker, that's how Sashkin and Zhenkin’s father” (he He was drinking heavily, not at all, but, sometimes, he appeared drunk, and then in the house they had a curse that still). “And we are all equal!” - I boldly declared, having gathered at school the foundations of Marxism-Leninism, and I received an interesting rebuke: “Yes, they are equal, but some are more equal than others!”, And this despite the fact that she didn’t read Orwell could And then it was stated to me that if only you become a worker and, after the first payday, you are drunk and spit out, “I will not tear you away from my heart and son!” For a fifth-grader who was brought up with a grandfather, grandmother and mother, Which was “somewhere out there” was, of course, not just a blow, but a real knockout. So by the 10 class I practically everything, except mathematics, straightened my “tails”. 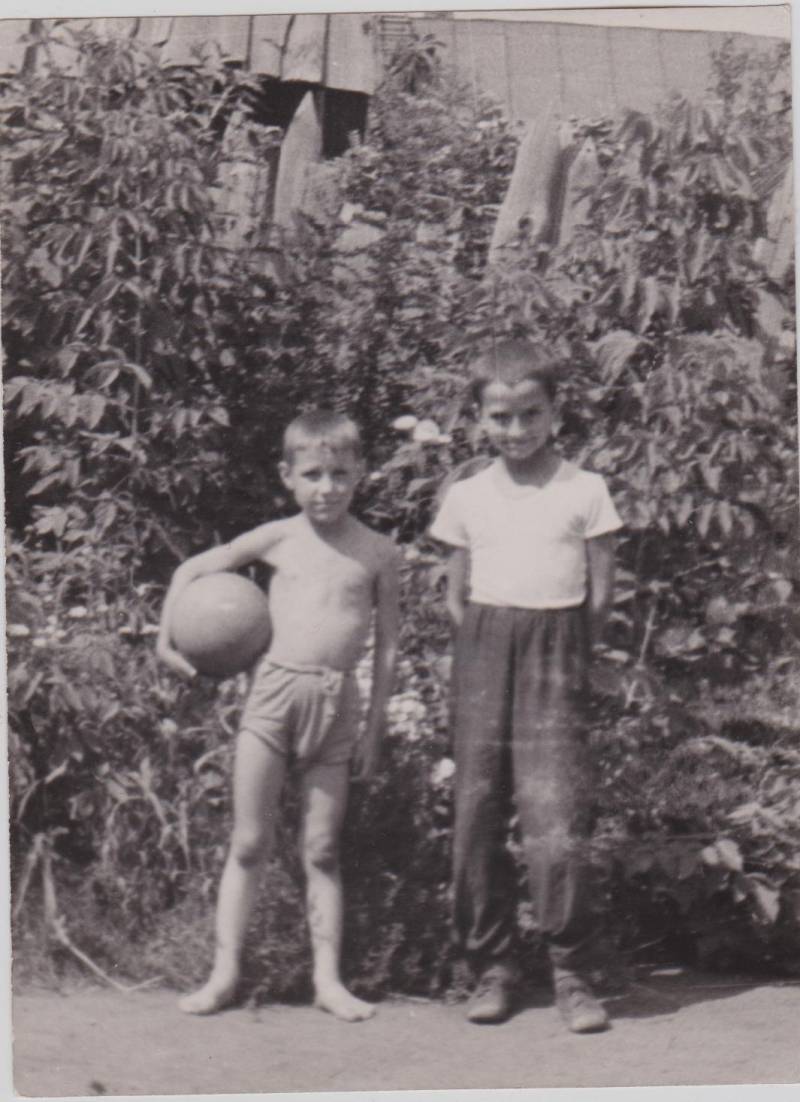 Another photo taken on the same day. Such were we, “boys with Proletarskaya”. “When I was a boy, I wore flared trousers, a straw hat, a Finnish knife in my pocket ...” We loved this song!

Well, then there was a university, a village where people turned out to be ... “even stranger than on Proletarskaya Street,” and there again the university and graduate school. All this time, if I saw the workers, it was only in those cases when I came to one or another plant to give them lectures on the line of the RK CPSU. And it was here that I had to get acquainted with the working class from a slightly different angle, namely, according to the documents of the party archives. It turned out that my fellow postgraduate students wrote dissertations on the party leadership ... something industrial there, while the theme of my work was the party leadership in the scientific and technical creativity of the students of the Middle Volga region in the 9 5th five-year plan. And, of course, we exchanged information, read each other the most odious examples. In addition, as a lecturer of the RK CPSU, I had to constantly “improve qualifications”, attend lectures of Central Committee instructors who periodically came to us and ... instructed what people can say and what cannot and how best to answer various tricky questions. 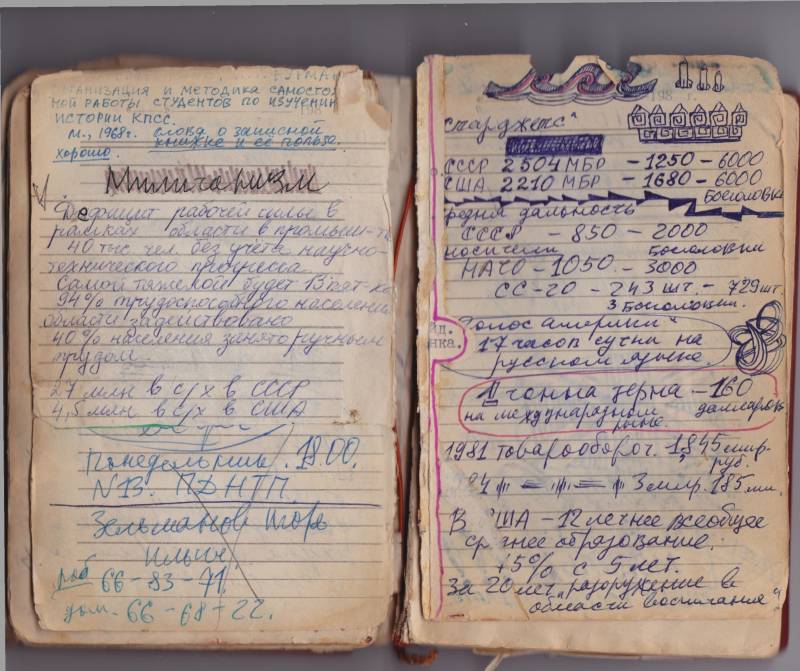 From one of these meetings, which took place in the autumn of 1985, just a month before my departure to Kuibyshev (Samara), I now had a tousled and greasy notebook, where I also wrote (in left) with a pen in blue ink 40% of the working population is engaged in manual labor, that is ... we have a very bad job with labor productivity. That in the agriculture of the USSR 27 million people are employed in rural labor, and they cannot provide enough food for the country, and in the USA there are all 4,5 million, and they feed their whole country and there is enough food aid. The shortage of labor within the framework of the Penza region is 40 thousand people, and there is nowhere to take them, and the most difficult will be the 13 five-year period - because 94% of the working-age population will be involved, and there are no reserves. On the right are interesting figures on the rockets, which could be voiced and said how the ICBMs will be reduced and how many of them we have, and how many of them. And also, that Voice of America is broadcasting 17 in Russian hours a day and we should strengthen counter-propaganda! Well, all kinds of curls appeared when the lecturer said something banal and uninteresting ... this is understandable.

Well, acquaintance with the data of the archives also gave a lot, because there was just some very interesting information about drunkenness in the brigades of communist labor, scandals over the apartments, and anti-Soviet statements of a number of irresponsible workers — in one word, all of life.

Another source of information was the work ... yes, the founders of Marxism, who were required to read from us in full and, I must say, among them were many interesting things. Here, first of all, it is necessary to call Lenin's The Development of Capitalism in Russia, which he wrote in 1896 — 1899, and came out quite legally at the end of March 1899 in a small St. Petersburg publishing house, M.I. Vodovozovoy edition of 2400 copies under the pseudonym Vladimir Lenin. About 500 sources were used in the work, and the level of its scientific character and degree of generalization are such that, by today's standards, a degree of doctor of sociological or economic sciences could be given for it immediately.