The dashing maneuver of the Israeli Minister of Defense

November 16, 2018
71
The resumption of the cease-fire between Israel and the Gaza Strip after the escalation of the conflict provoked a political crisis in Tel Aviv, the collapse of the ruling coalition in parliament and the resignation of two ministers at once. 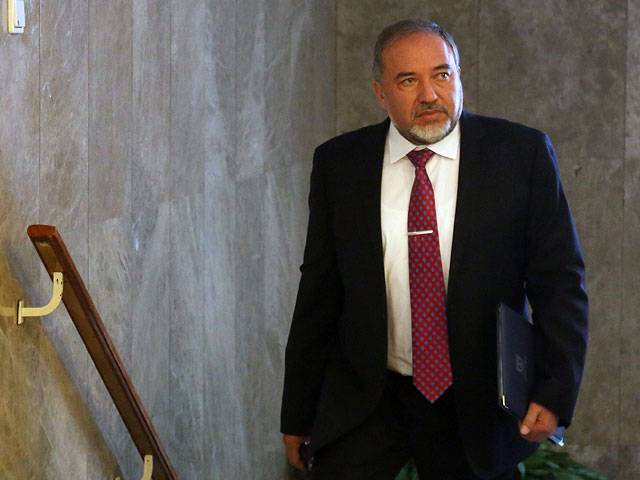 On November 6, Hamas stated serious progress during the consultations on ending the blockade of Gaza and concluding an armistice with Israel. Two days later, it became known that with the mediation of Egyptian President Abdel Fattah al-Sisi, the head of the Palestinian Authority, Mahmoud Abbas, agreed to an armistice with the Jewish state.

However, on November 11, the peace process was stalled. 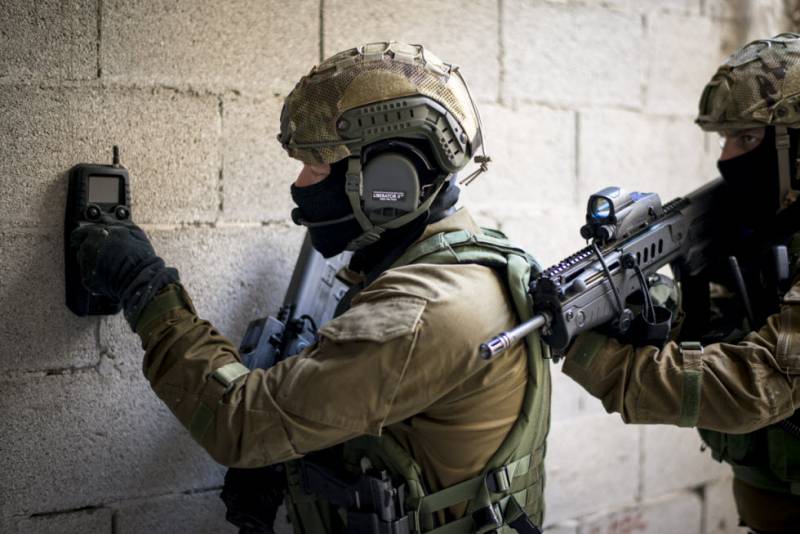 The following happened: the Israeli DRG, operating in a civilian vehicle, dressed in civilian clothes, penetrated into the Sector’s territory to a depth of three kilometers, and near the city of Khan Yunis in the southern part of the Gaza Strip organized an ambush on a high-ranking military Hamas and its accompanying fighters. The saboteurs fire killed the brigade commander of Ezzedin al-Qassam of the military wing of Hamas Nour Barak.

Israeli DRG covered up aviation, which resulted in the death of another five Palestinian fighters, among whom was another Hamas officer, Mohammad al-Karra. 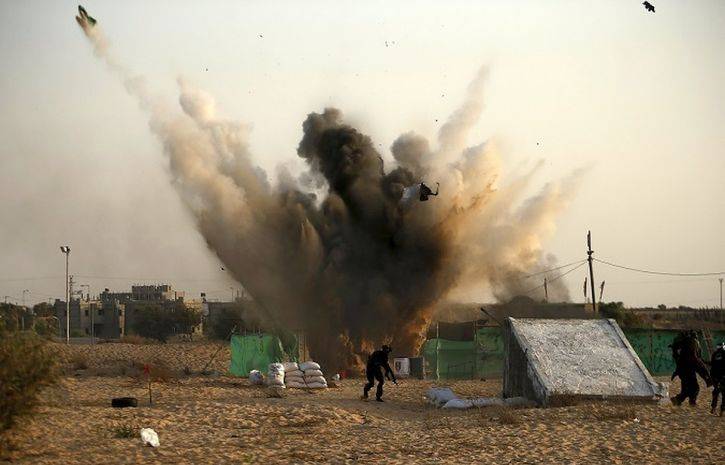 Israeli special forces suffered casualties - one was killed, another was wounded. According to the media reports of the Jewish state, this operation has become the crown of an agent game. That is, the operation to assassinate N. Baraka was carefully planned, and he was, in fact, lured into an ambush. 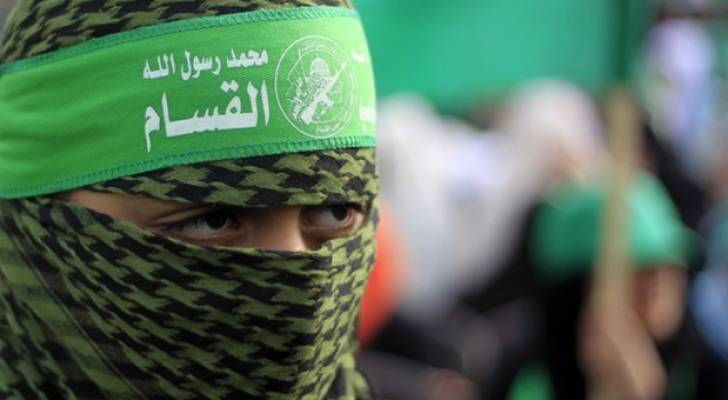 Further, Hamas security forces brought all military formations on high alert. And the armed wing of the Palestinian Islamic Jihad group announced the general mobilization of its fighters.

12 November, the Jerusalem Post reported that in the morning Hamas launched 17 missiles, and the Iron Dome air defense system managed to intercept only three of them. 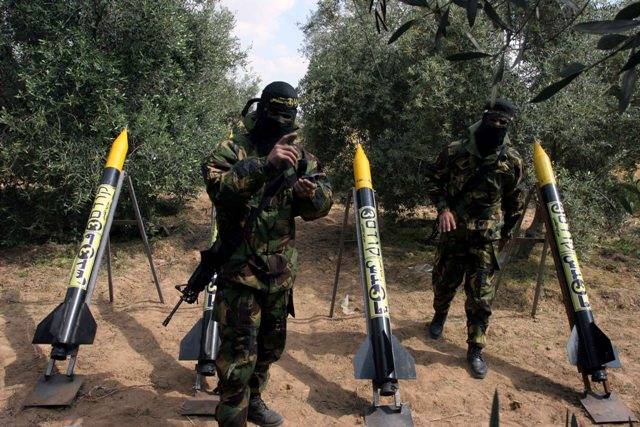 And by the evening of November 13 more than 450 missiles were launched from the Gaza Strip in Israel, of which about 100 were intercepted by the air defense system. Tel Aviv announced the death of one civilian and injured more than 100 people.

In turn, the IDF launched missile-bombing attacks on 160 targets in the Gaza Strip. Loss of residents amounted to eight people. 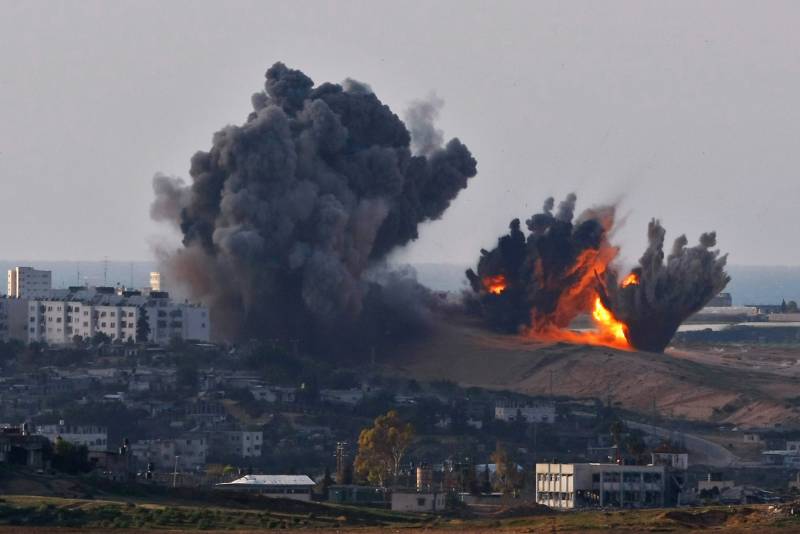 It is noteworthy that the United States hastened to express support for the actions of Tel Aviv. In particular, Washington announced a five million dollar reward for information that will help locate the deputy chairman of the Palestinian Hamas political bureau Saleh al-Arouri, as well as high-ranking commanders of the Lebanese Hezbollah resistance movement Khalil Yusuf Mahmoud Harb and Haitam Ali Tabatai.

The relevant statement by the US Department of State was circulated at the time of the exchange of missile strikes, apparently to give Israel’s actions a “fight against terrorism”.

With the same goal, a little later, US counter-terrorism coordinator Nathan Sayles said that Washington is extremely concerned about the growing ties between Iran and the Hamas movement.

Recall that during the war in Syria, representatives of Hamas, whose leaders hid for many years in Damascus, where the headquarters of the movement was organized, went over to the opposition — first the Syrian Free Army, then “Ahrar al-Sham” and even banned in Russia terrorist organization "Islamic State".

In fact, Hamas, who decided that Assad’s fate had been resolved, simply outbid the monarchies of the Persian Gulf, and now he has two headquarters in Ankara and Doha. 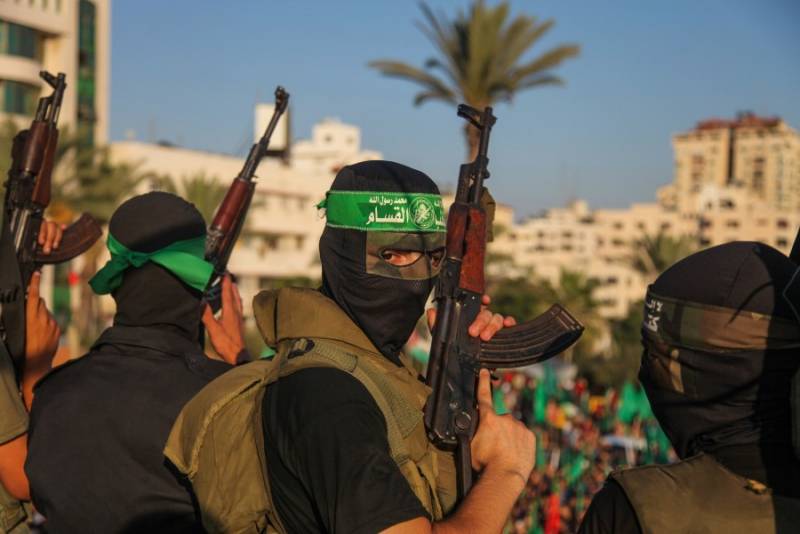 Ezzedin al-Qassam brigade fighters, whose commander was killed by Israeli saboteurs 11 November, trained the militants of the Free Syrian Army. In light of this, financing and arming Tehran with Hamas, as the United States claims, looks extremely doubtful. But such logical inconsistencies Washington does not care much.

In connection with the outbreak of conflict, Israeli Prime Minister Netanyahu was forced to interrupt his trip to Paris. At a press conference in the French capital, he stated, justifying the actions of the IDF, that the situation in the enclave had “no diplomatic solution”. However, he promised to do everything to "prevent a war."

On November 13, Palestinian factions in the Gaza Strip announced a cease-fire and pledged to support this regime if the Israelis cease hostilities.

A few hours later, Tel Aviv also decided to end the fighting. The fierce protest of Israeli Defense Minister Avigdor Lieberman, who, while not agreeing with this step, resigned. 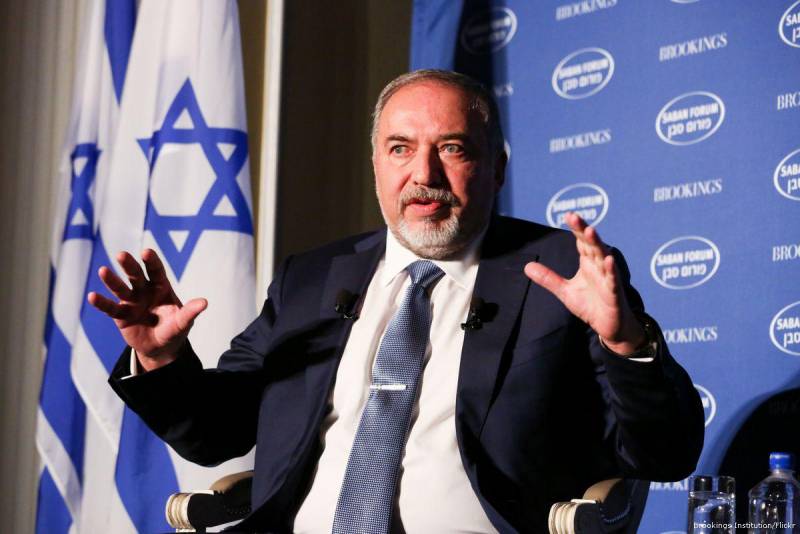 In his opinion, the Palestinians did not suffer due retribution for rocket attacks.

“We buy silence for a very short time and pay for it with security for a long period,” said the Minister, announcing his resignation, RIA reports.News».

Avigdor Lieberman heads the party Our Home Israel, and the party faction in the Knesset, supporting the head, leaves the ruling coalition and goes into opposition.

Together with him, the Minister of Aliyah and Integration, Sofa Landver, also a member of the Our Israel Home party, resigned.

The Minister of Defense stated the need to hold early parliamentary elections as soon as possible. According to Israeli experts, the elections, which should take place in the 2019 year, are likely to be ahead of schedule, but perhaps not as fast as Lieberman would like. Anyway, the transition of his party to the opposition does not deprive the Prime Minister of the country, Benjamin Netanyahu, the support of a parliamentary majority. Although it reduces the ruling coalition to the minimum 61 mandate from 120.

Hamas spokesman Abu Zuhri said that Lieberman’s resignation was a recognition of his defeat and a political victory for Gaza.

However, I would not consider Lieberman’s resignation as a defeat. Rather, it is a well-calculated political maneuver. This very ambitious politician is taking steps to make the next elections triumphant for him and his party. By his resignation, he “produces” himself as an idol of the right, since he opposes Netanyahu’s (also right-wing) “capitulatory” policy, on the other hand, allows him to escape from the extremely difficult and practically unsolvable problems that he encountered as a war minister. 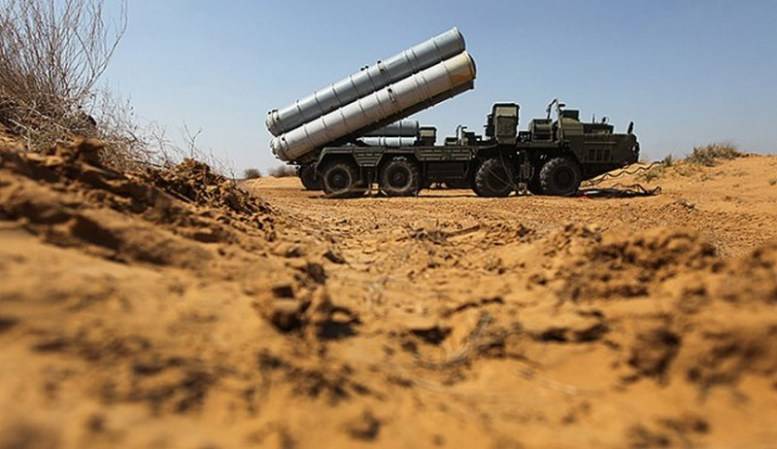 Take at least the situation in Syria after the transfer of the C-300 “Favorite” to this country. To maintain the prestige and confidence of its own population in the military dominance of Israel, strikes against the SAR should be continued. But at the same time the loss of the aircraft will be a real catastrophe, not only for Israel, but also for the United States.

Recall that on November 7, US special envoy to Syria, James Jeffrey, said he expects Moscow to open the sky of Syria to the air force of the Jewish state. 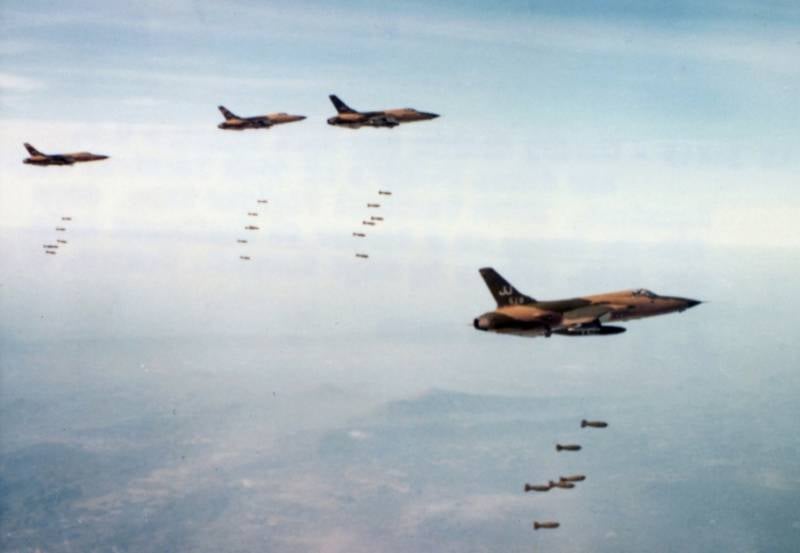 “We certainly hope that Russia, despite the fact that it supplies the Syrian government with the C-300 missile defense system, will create conditions for Israel to continue air strikes in Syria against Iranian targets,” the Israeli publication DEBKAfile quoted the envoy.

His words about the need to obtain permission from Russia to fly in the sky of Syria say that all words about the ineffectiveness of C-300 were a bluff. The American and Israeli military, having fully analyzed the capabilities of the Russian complex in Greece and Ukraine, made sure that C-300 is deadly for them. Otherwise, the strikes would continue, and no one would ask for permission.

DEBKAfile military sources do not observe signs of a weakening of Moscow’s position on the Israeli side; on the contrary, the publication indicates that last week Russia warned that Israeli planes that penetrated Syrian airspace to attack Iranian targets would be shot down. 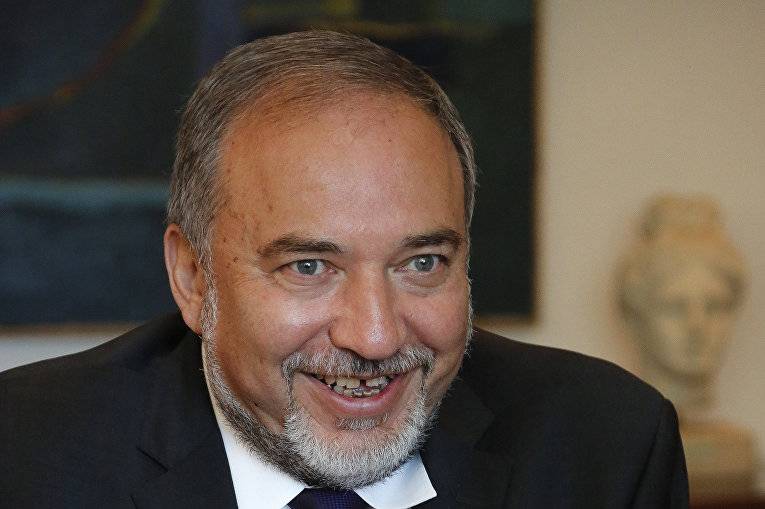 And now Lieberman found the opportunity to gracefully get out of this impasse, with his head held high, and even collecting the sympathies of the electorate, which adheres to the right orientation (and this is usually the majority of voters).

So did the DRG raid and the subsequent exchange of missile strikes be started for the sake of this maneuver? And the ambush itself on the Palestinian commander was an amateur Lieberman? 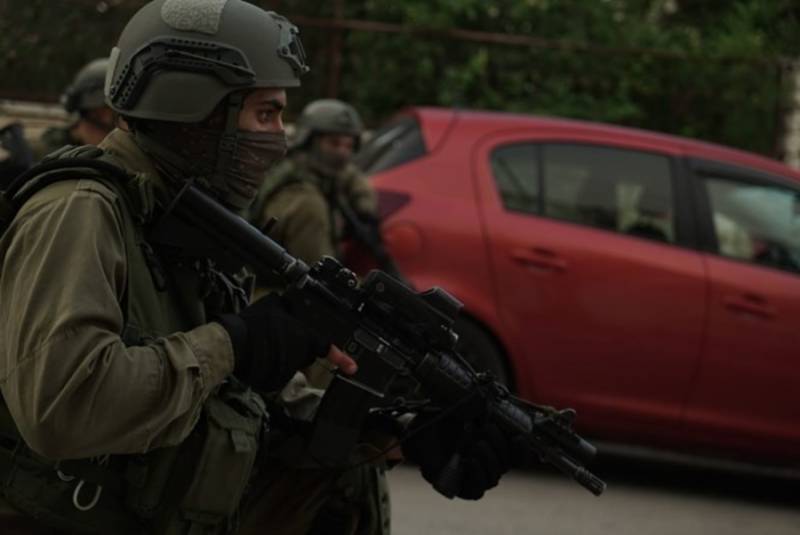 Of course not. The emerging positive shift in the peace negotiations forced Tel Aviv to lift or at least ease the blockade of the Gaza Strip. But such steps are usually extremely unpopular with the electorate and can easily lead the “capitulant” and the “conciliator” to political, and even physical (remember, Yitzhak Rabin) death. And there is one way out - to provoke an aggravation and to “nullify” the results of the negotiations. To then begin a new consultation. And so on to infinity. The task is facilitated by the fact that even in the Palestinian camp there are enough of their “hawks” and provocateurs.

That is, the usual combination was used. He was podgadali under the Paris meeting, where Netanyahu spoke about the "terrorist attacks" and "the exhaustion of diplomatic means" (it is noteworthy that the search and ambush of the Israeli special forces in the depths of Palestinian territory were presented by the world media as "shooting the IDF fighters with Hamas militants), having achieved sympathy from part of the world community. 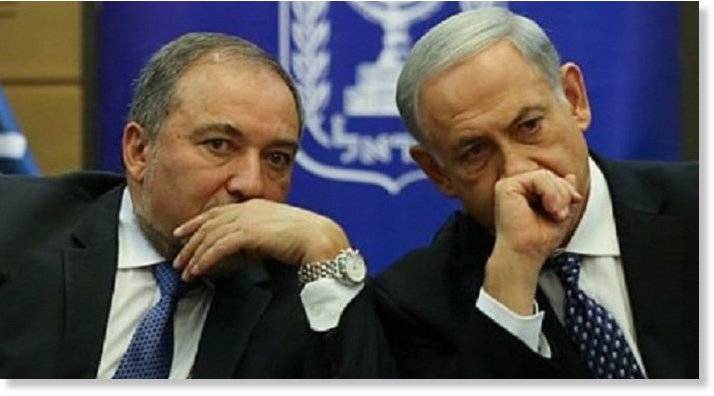 But here Lieberman played "his game", actually substituting the premiere.