November 9, 2018
110
During the week, on the “60 minutes” program, which is being broadcast on the Russia-1 TV channel, a very remarkable statement was made by the former representative of the Ukrainian government (sample of the period of the presidency of Viktor Yushchenko). The ex-official, being in Ukraine, during a discussion of the gas perturbations on the air by the guests, said in bewilderment: what are you discussing? - What are the ridiculous ways Kiev continues to buy Russian oil, coal and gas? Here elections will pass, and ours can come to the power again, - added "former".


The statement is extremely interesting. It forces one to ask several questions at once: first, who are these “ours”, secondly, is there a chance for these “ours” to return to power? 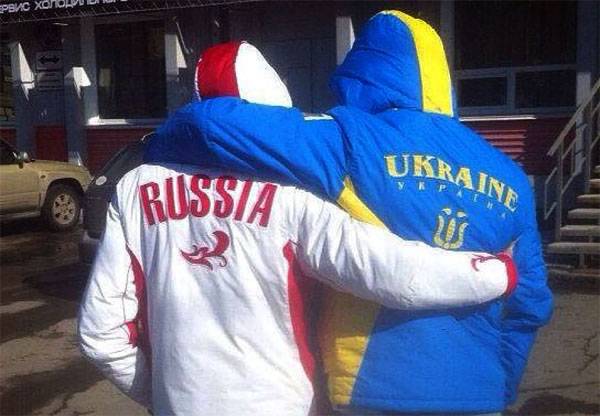 Considering that the statement was made by the official of Yushchenko’s times, it turns out that even those who once spoke for the “orange maidan” are in a state of shock from what is happening in Ukraine today. The person “on the other side of the video bridge” openly says that he does not understand who he needs to be in order to seriously convince citizens of the country that it is expedient to buy American coal and liquefied gas at a time when American companies are loading themselves with cheap energy in Russia? Who should be that the American bulk carrier loaded with coal in the port of Novorossiysk should be set as evidence of progress in Ukrainian-American relations?
The same questions are asked and the vast majority of Ukrainians. But who cares today in the cabinets of Ukraine? Perhaps no one. The main thing - to enlist overseas support.

What happens in this case?

first - stops the war in the Donbas. Restored housing and infrastructure.

Second - Natsik with black-red rags begin to hide in barred premises with preliminary exemption from excess weight in the form of weapons and military equipment. Shukhevych’s prospectuses remain only on cards that are sent to historical museums.

The third - Ukraine again turns its attention to the east against the background of the Russian joyful decision to forgive debts, for the fraternity has triumphed again.

Fourth - Against the background of forgiveness of past debts from Russia and the entire EAEU, the “new” Kiev asks for loans for economic recovery, including loans for servicing the GTS in order to preserve the traffic of pipe gas. The brotherhood provision does not give Moscow any moral right to refuse the brothers, since they publicly change European lace panties for good family pants as a symbol of unity.

Fifth - The US ambassador initiates the introduction of sanctions against the "new" Ukraine for attempting to poison with rat poison Petro Poroshenko who escaped abroad.

Sixth - “comrades” are returning to the Ukrainian army, and at the Yavoriv training ground, the only reminder of the stay of the American instructors is the roll of toilet paper “Make-in-Eysey”.

Seventh - having forgotten about the program of import substitution, the Russian defense companies in a passionate kiss merge with the defense companies of Ukraine, which have not drilled the trunks under the caliber of the NATO sample.

Eighth - no one breaks Soviet awards from veterans, quotas for the use of the Russian language are canceled, 9 may, according to Khreshchatyk, be held in a solemn march by Ukrainian, Belarusian, Russian, Kazakhstani, Azerbaijani and other soldiers of fraternal states.

But something suggests that all this "hypothetical" on most points will remain on paper. Too much time has been lost so that - all at once. Yes, and there is a single country in this world, which at the moment has staked out positions on free Ukrainian open spaces so that no “ours” or even “half ours” will be allowed to power in the coming years. At least, try to do everything to prevent.

The only thing that can become a reality is a timid demonstration of those family cowards by “new” Kiev, so that Moscow will melt and indeed not only “fraternally” write off old debts, but also give out new loans at a rate that even Russian citizens will never receive . What you can do for the sake of the twin brothers, if they hint that they are now "a little bit closer to Russia" ...
This can also be attributed to the GTS of Ukraine - it may well be announced that the preservation of gas transit through Ukraine is an important task, since how can we be denied the possibility of something “to grab for the sebe”.

Ambassador Zurabov solemnly returns to Ukraine and launders the walls of the embassy from the green ...

As a result, Ukraine with millions of anti-Russian-minded propaganda by individuals, with former difficulties for Russian-speakers, with the sometimes exploding situation in the Donbas and simultaneously with even more substantial economic support from Russia against the background of the anti-Russian sanctions “for the Crimea”, “for Donbass”, “ for Magnitsky, for Violin, for Violin's Guinea Pigs, for LGBT people, for Kadyrov and for doping, it turns into Frankenstein, who has one hand “friends”, the other “is not friends”, who one eye looks at usa and the other is not at all.

On the Russian talk shows, the same Tryukhans, Yali and Karasevs will appear, but now proving that we received exactly the Ukraine, which we could receive in half-measures, which were undertaken or not undertaken. But they told us ...

In general, the situation may well develop, as in a couple after a divorce, mutual beating of plates of people, but living in the same communal flat. The "former" already go hand in hand with others, but use one gas stove, one toilet, and when they take it on their chest, take out a photo album and begin to look at the photos torn in anger, in which they are together. And when sober, then again - beating plates and talking in a raised voice about the division of living space.