November 3, 2018
59
Russian-Cuban summit talks took place. Russian President Vladimir Putin received in the Kremlin the chairman of the State Council and the Council of Ministers of the Republic of Cuba, Miguel Dias-Kanel, who is making his first official visit in this rank to the Russian Federation. 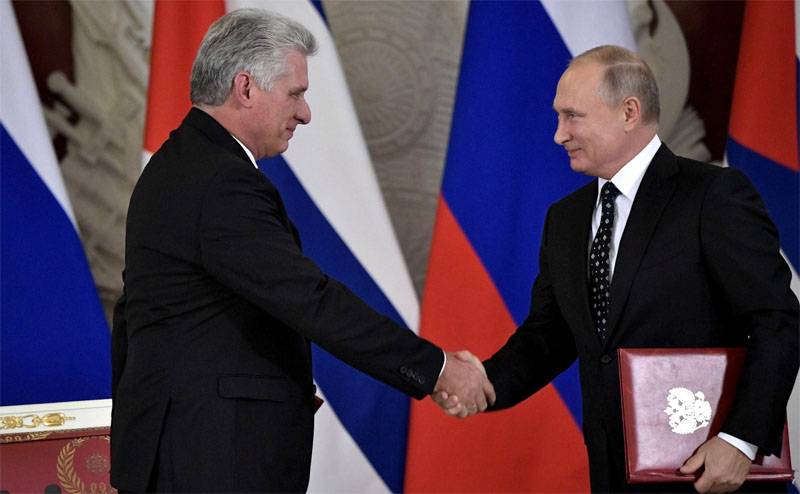 Official information on the talks of the heads of state is extremely dosed. It was stated in general terms that Vladimir Putin and Miguel Diaz-Kanel discussed the state of and prospects for deepening the strategic partnership between the two countries, and also touched on the topic of international and regional issues.

The Kremlin press service:
Following the visit, V.Putin and M.Dias-Kanel Bermudez signed a joint statement on common approaches in international affairs. The heads of the two states also made statements to the press.

The joint statement voiced the readiness of the two countries to protect common interests in the international arena, to advocate the establishment of broad international cooperation based on compliance with international law and the strengthening of the UN.

The leaders of the two countries touched on the subject of sanctions. Cuba has a wealth of experience in this matter, since it has been forced to live for half a century not just under American sanctions, but in fact under a complete economic blockade. In this regard, it is extremely important for Cuba to restore full-scale cooperation with the Russian Federation.

Press office President of the Russian Federation:
The leaders of Russia and Cuba stressed the inadmissibility of disseminating inaccurate information in the media space, which is the basis for applying strategies of non-traditional wars, including conducting information campaigns aimed at discrediting sovereign states, interfering in their internal affairs and striving to legitimize unlawful sanctions and even regime change. Emphasizing the importance of maintaining international peace and international security, the Parties emphasized their intention to work closely together, aimed at ensuring the effective implementation of the Treaty on the Non-Proliferation of Nuclear Weapons weapons on the basis of its three key components - nuclear non-proliferation, the peaceful use of nuclear energy and disarmament.

It is noted that the Cuban leader spoke critically about the statements of the US President about withdrawing from the Treaty on the Elimination of Intermediate-Range and Shorter-Range Missiles.

From the material:
The parties note that this Washington decision is fraught with the most negative consequences for international security and the arms control system, and urge the United States to reconsider its intentions to withdraw (from the INF Treaty).

During the negotiations, agreements were reached on an economic plan. It is planned that the program of cooperation between the Eurasian Economic Union and Cuba will begin its implementation.

The reaction of the Cuban press to the agreements between the leaders of the two countries draws attention. Thus, in one of Cuba’s largest newspapers, Granma, the official visit of Diaz-Kanel is called a breakthrough of the blockade that Washington is arranging for Cuba. And this is a comment by a Cuban user on an article in "Granma" about the visit of Diaz Kanel to Moscow (eloquently testifies to the attitude of ordinary Cubans to our country) (translated from Spanish):
Our congratulations and the greatest respect for the great President Vladimir Putin. Long live Russia, the great and beloved Russia. 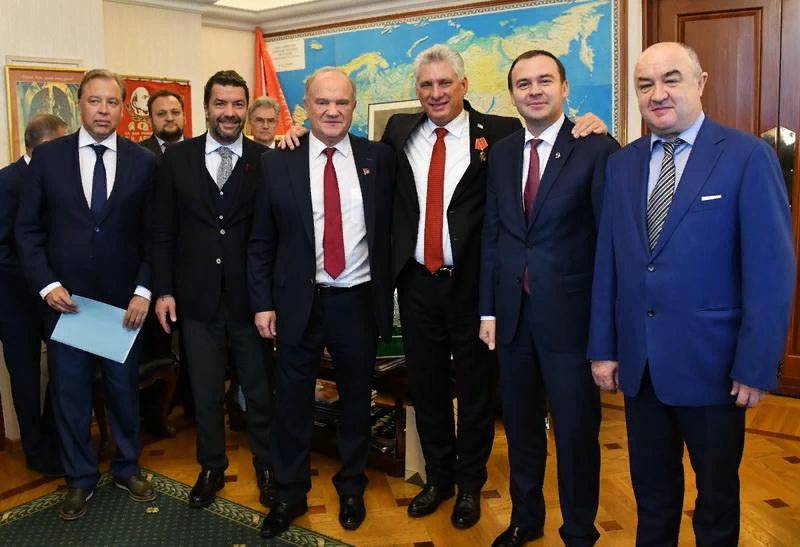 Cuban media express frank joy at the fact that contacts between Liberty Island and Russia are beginning to deepen, and that Russian business is coming to Cuba to implement major economic projects.

Miguel Diaz-Kanel (quote from "Granma"):
As you all know for us, Russia is a wonderful and great country, it is a brotherly people, whose warm relations with us have a long-term character, and we reciprocate.