So we came, finally, to perhaps the most interesting era in stories Japan - the “era of the fighting provinces”, the era of the war of all against all, the result of which was the unification of the country under the authority of the Tokugawa clan. How this happened is described at once in several materials published here on HE, and in this article we will deal exclusively with armor. Let me remind you that here on the site there were already articles about Toshi-Gusoku armor, that is, “modern armor”, which appeared after the firearms were brought to Japan in 1543. weapon. 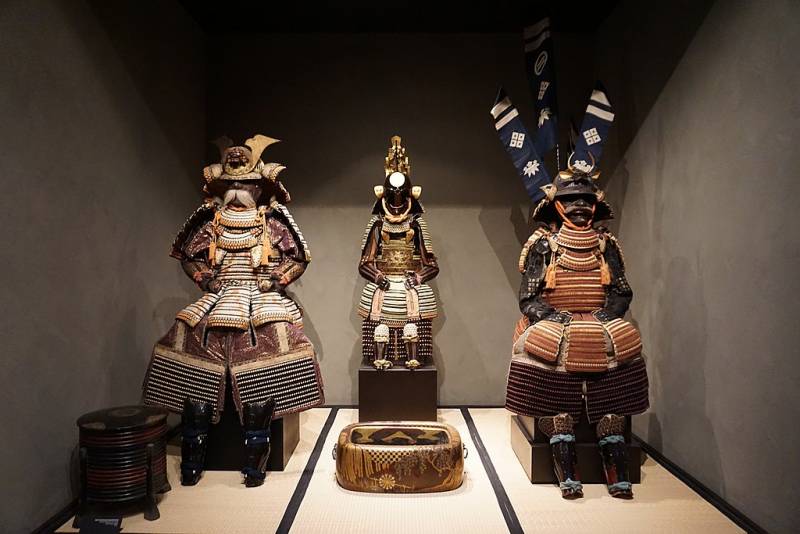 The armor of the samurai of the Sengoku era (in the center is children's armor). The figures on the left and on the right are traditional armor with tight lacing. (Anne and Gabriel Barbier-Mueller Museum, Dallas, Texas)

However, this topic is so interesting that it makes sense to return to it at a new level. Which is primarily associated ... with illustrative material. In previous articles on Japanese armor, mostly photographs from the Metropolitan Museum in New York were used. In this material we will get acquainted with the cuirass of the Japanese samurai and their helmets of the Sengoku era, we will be based on photographic materials from a very interesting museum, by the way, American too - the Anna and Gabriel Barbier-Muller Museum, which is located in Dallas, Texas. Well, this is the same city where President Kennedy was shot. But, as you can see, there is a very interesting museum of Japanese culture in it. So, if any of the visitors to the VO website suddenly find themselves in the United States in the city of Dallas (or already live in the States, and do not know about it!), Then ... he may well visit him and see with his own eyes all that we are here and now see in photos from this museum! 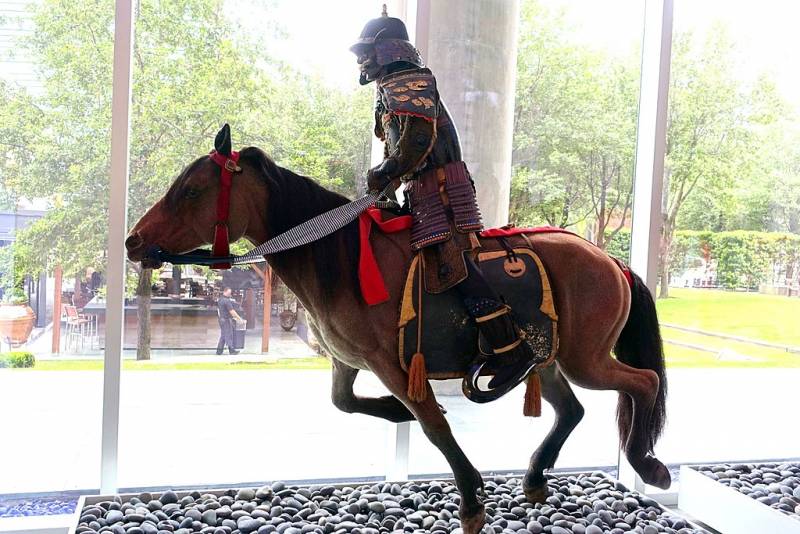 The figure of the samurai rider of the Edo era in the hockey armor.

Well, we need to start with the fact that since the ancient Japanese were horse archers, then the armor initially, and later, was calculated on protection from arrows. Therefore, unlike the European ones, they didn’t apply mail at all for a long time. All armor was plate. Breastplate - to (or ko - “tortoise shell) was assembled from plates woven together with cords. Either leather or silk. It is hardly worth mentioning the Japanese names of these plates, it is more important to note that in the early armor of the Heian era three types of plates were used: with three, two and one row of holes, and later - narrower, with two and three rows. In traditional armor, an o-plate plate with two and three rows of holes overlapped each other so that they overlap each other by two thirds. Single-row plates were attached at the edges of the cuirass, which strengthened them even more. 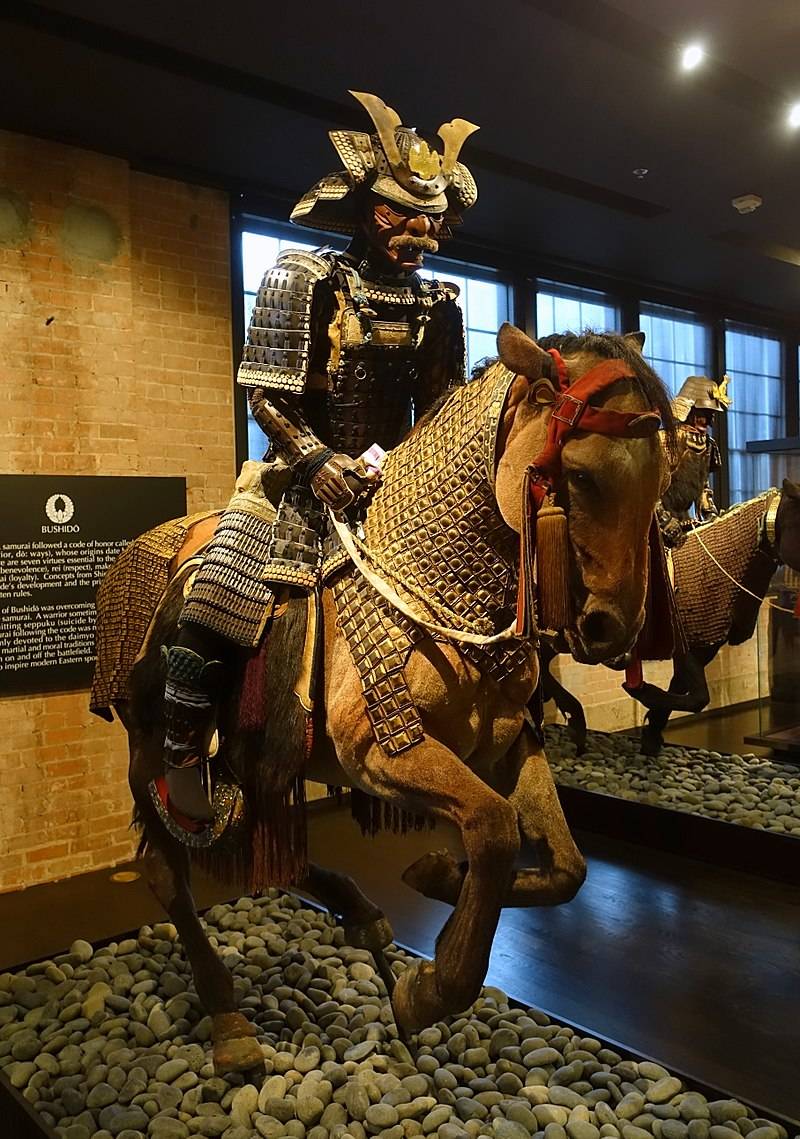 Mogami-do armor, first appeared in the era of war, Onin-Bummey (1467-1477), horse harness bug and horse armor mind-yoy. The restoration of the armor was carried out in 1854 year. 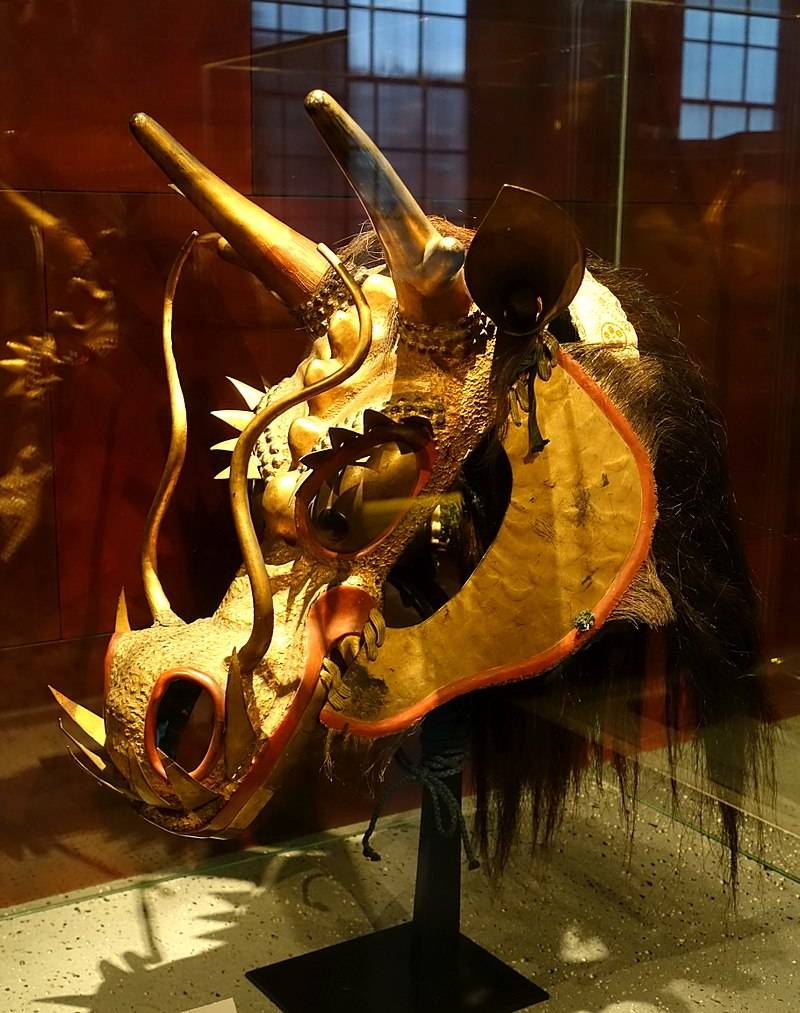 The plates themselves were a true work of art. Firstly, they had a “lining” of leather, secondly, they were repeatedly covered with the famous Japanese varnish on all sides, and secondly, chopped straw, and grated ceramic dust, and ... dry ground and gold and silver powder. Sometimes the metal was wrapped with leather also from the “face”. That is, the plates were “plump” and, being fastened with cords, also had good shock-absorbing properties. By the way, their upper part was either rounded or skewed, because of which the stripes of armor from these plates in their upper part resembled a palisade. 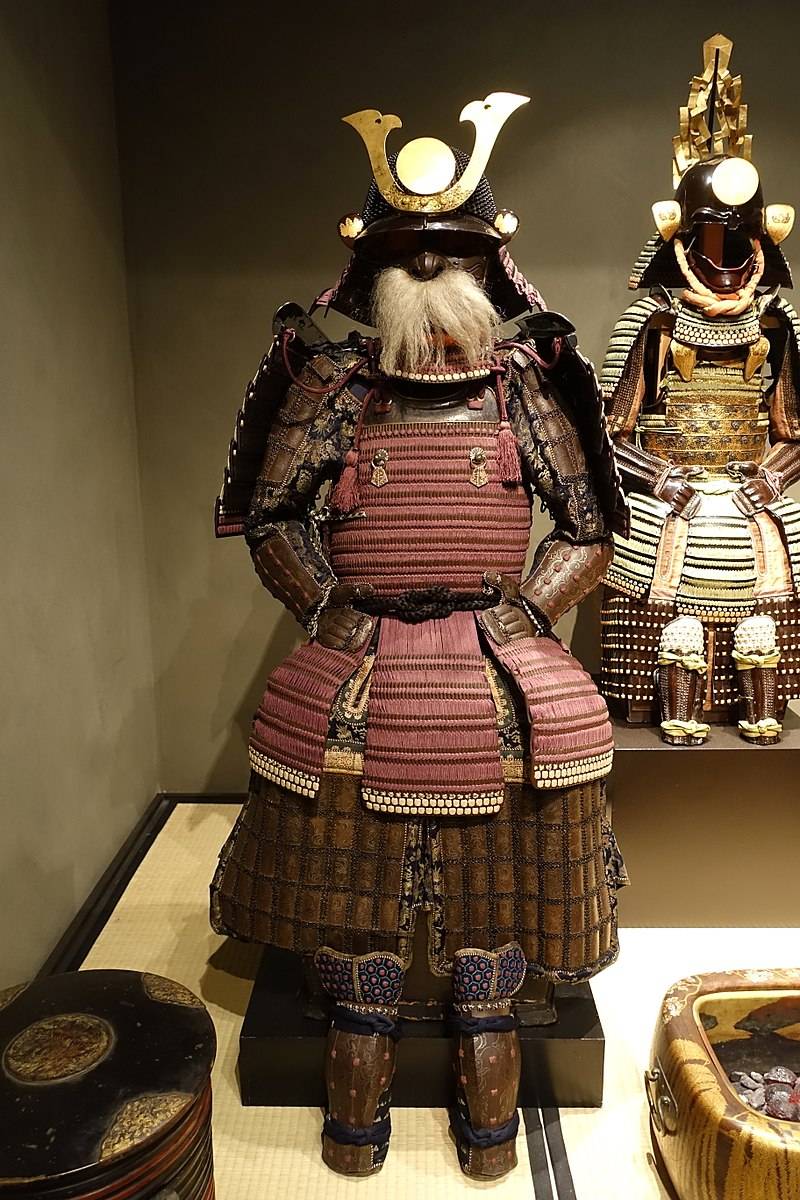 Hon kozane ni-mai-do - two-piece armor. The helmet is signed by Echigo Munetsugo. Restoration around 1800 of the Edo era.

Now let's turn to the armor itself, and here we will tell about them in more detail and give all their specific Japanese names. The reason for the appearance of new armor, which will be discussed here, is simple. 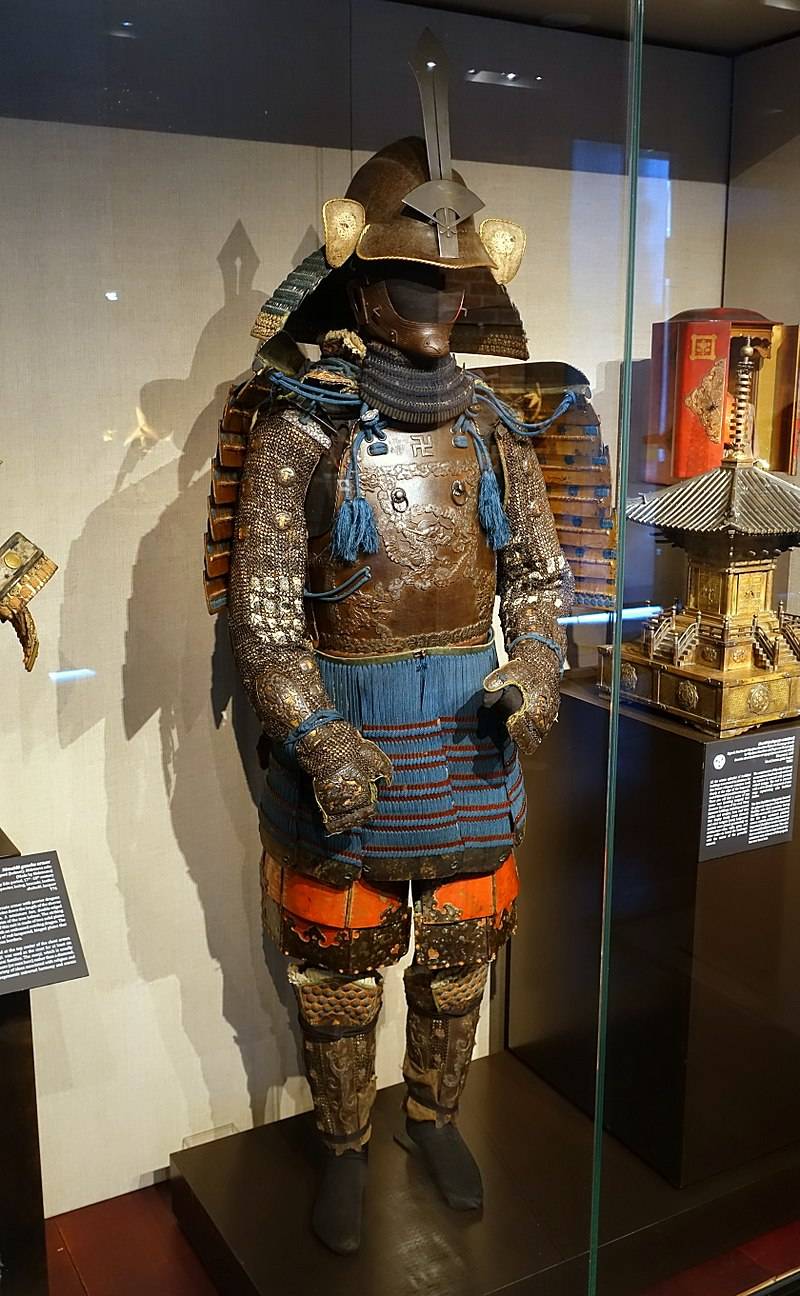 The design of traditional o-ry was uncomfortable. Rather, she was comfortable for the rider, but not for the infantryman. That is why, as more and more infantry soldiers were attracted to the "army" of samurai, the armor also changed. Armor before-maru and haramaki-do appeared, the weight of which was distributed over the body more evenly and tired of their owners. They were distinguished by a more rare lacing and, already after 1543 of the year, the requirement to resist firearms. 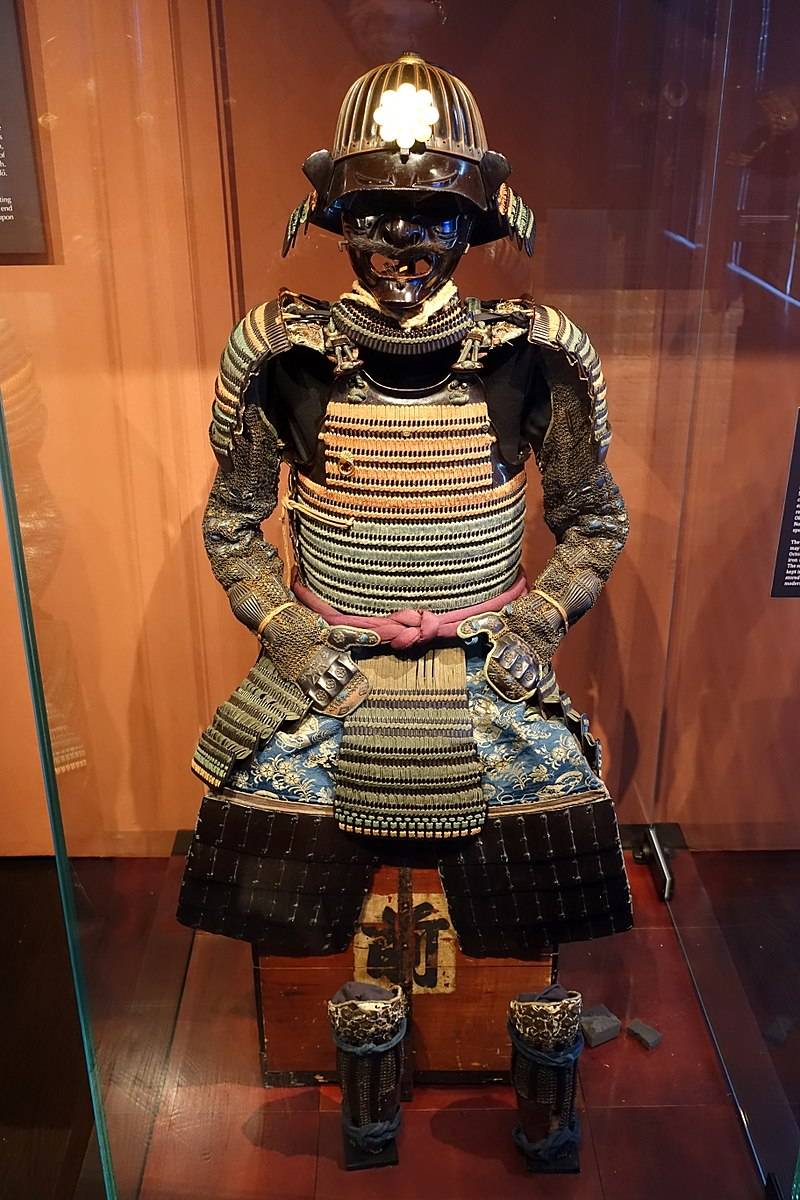 Was invented and a way to facilitate their production. Now the plates were collected in stripes, and they in turn wrapped the skin, which was covered with varnish. Five of these bands were connected to each other with a rare lacing and they received a cuirass of five rows of bands covering the entire chest and abdomen. Such a cuirass also lay on her hips, which reduced her pressure on her shoulders. Such armor has received the general name tati-do, which has become equivalent to the name tosey-do, or “new armor”. These bands themselves were now assembled from wide plates, but ... since fashion is fashion, tradition is tradition, their upper edge was made toothed, so that it seemed as if these bands were assembled from many small, traditional plates! 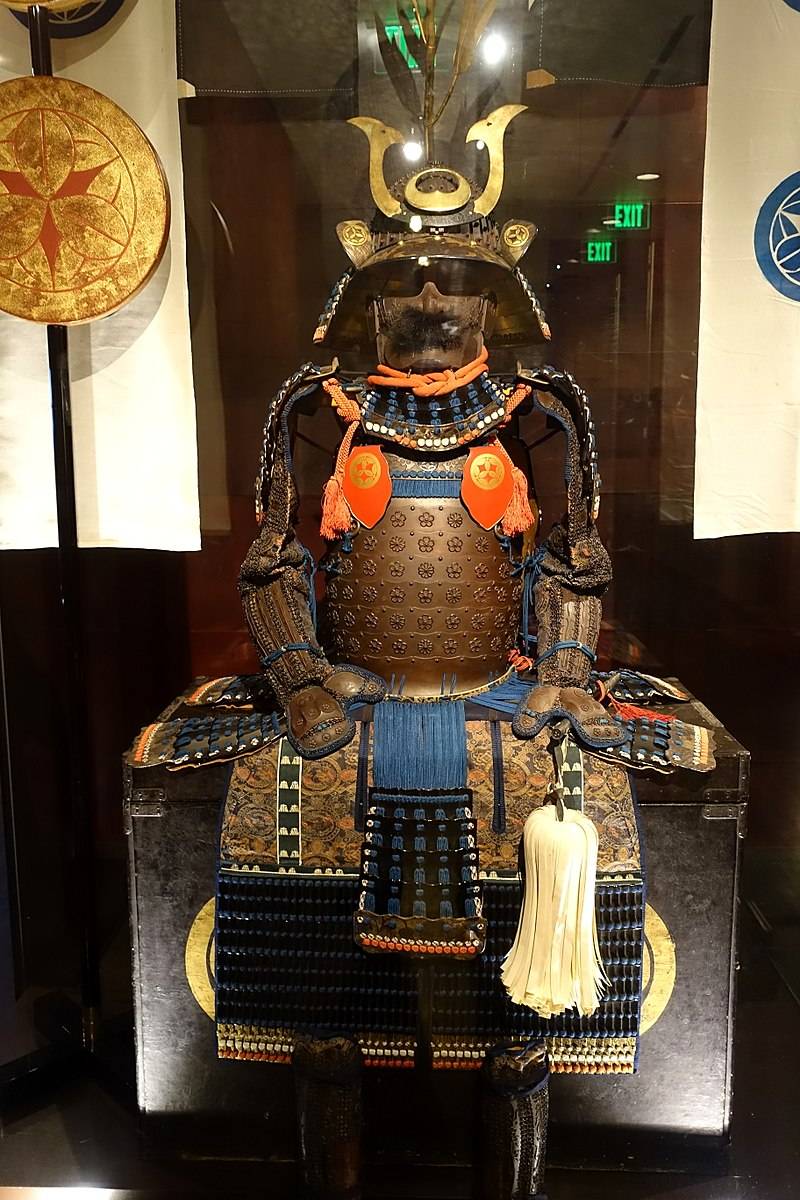 Their other analogue was the maru-do armor, which consisted of two halves - the front and the back and fastened together either on the strings or on the hinge on one side and strings on the other. Such cuirass with a joint even got a special name: ryo-takahi-mo-do and they turned out to be very convenient for the soldiers of large armies. And they were convenient to store and transport! 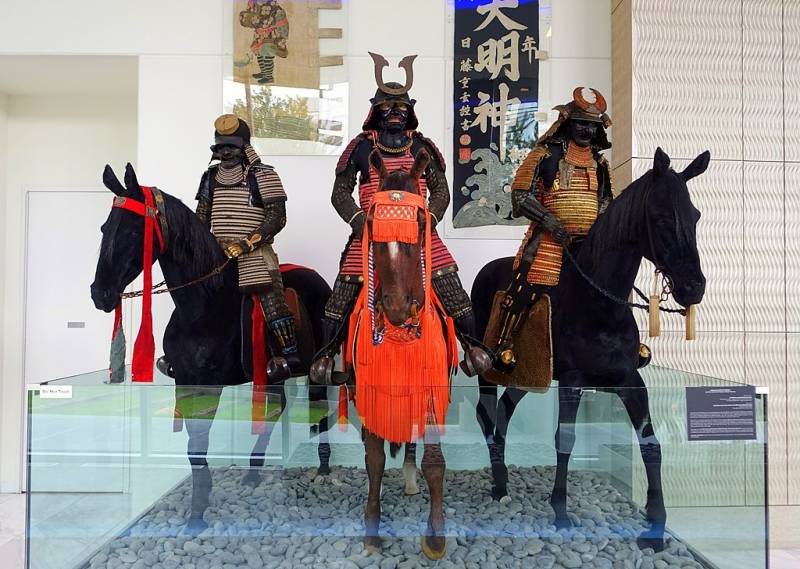 It can be considered rather funny that the Japanese had many names for their armor, each emphasizing some of their characteristic features. So, all two-piece armor, regardless of what records they were made from, could be called ni-mai-do. But if you had a breastplate of two sections, but made from real plates, then you could call it another way - hon-kozane-ni-mai-do (that is, “no-mai-do” from “real plates "). But if the plates you had were “not real”, then such a breastplate was called - Kiritsuke-kozane-no-mai-do. If the cuirass consisted not of two parts, but of five — one front, one back, one side (left), and two, overlapping each other under the right hand, then, again, from whatever plates they were made, their common it was this: go-mai-do, but if the left plate was made of two parts connected by a hinge, then such a cuirass was called rock-mai-do. But if this six-breasted breastplate was fastened with ties on each side, then it should be called like this: ryo-tachimo-roku-mai-do! 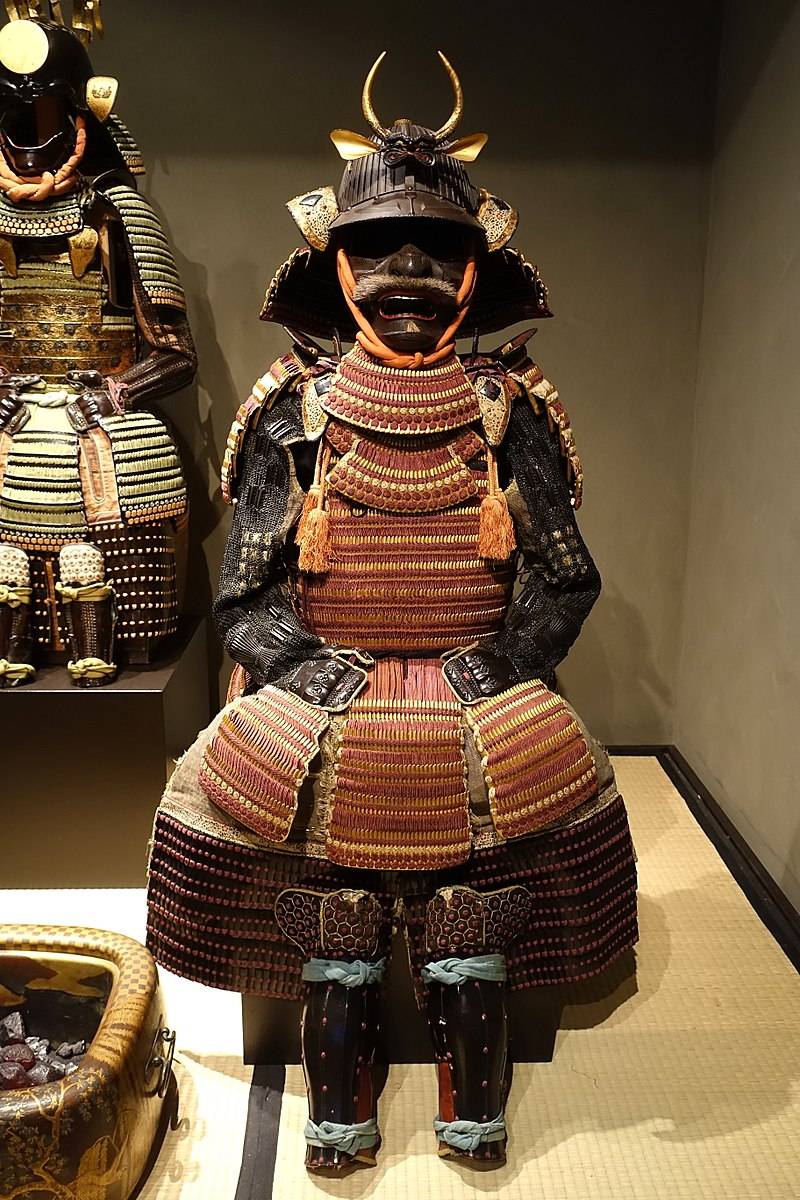 All these armor were popular until the middle of the XVI century, and it is clear that when they were created, the priority was to demand the convenience of wearing them. But from the middle of the century the requirements for armor changed again. Bulletproof - this is the most important requirement, which is now imposed on them. Okegawa-do armor appeared and became massive, in which the cuirass was made up of smooth metal bands connected to each other without the use of lacing. And the fantasy of the masters who made them turned out to be truly limitless again. So, when the strips were placed on the cuirass horizontally, and the rivets connecting them were not visible, such a cuirass was called yokokhagi-okagawa-do. 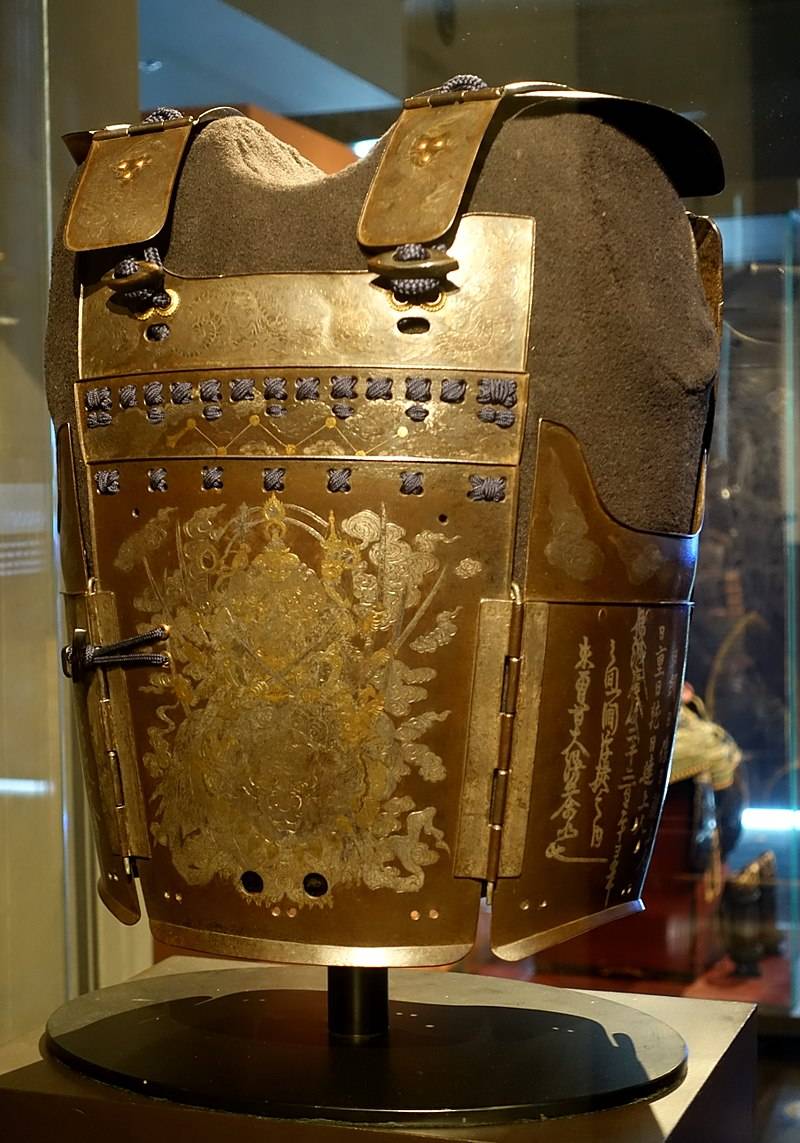 The most common “new type” armor is presented in the bottom illustration. 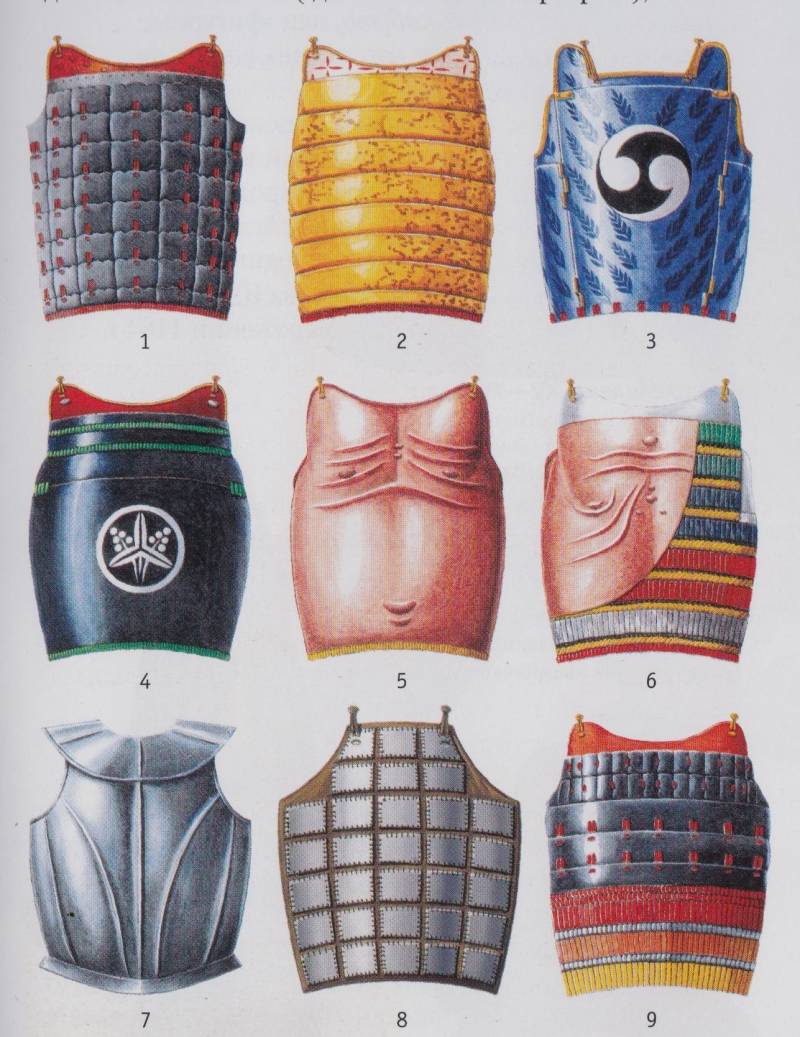 Please note that the cuirass of many armor depicted monks, the coats of arms of their owners. Moreover, this concerned not only the ashigar, for whom it was an identification mark, but also the nobility, who did not need to be recognized, but who, nevertheless, were proud of it. On the plate armor, the image of the coat of arms was reproduced using weaving, and on the flat surfaces of one-piece forged armor, it was either minted or made overlaid.