October 24 2018
78
The situation in Ukraine is entering a new phase. It is not only a matter of internal chaos, called the “election campaign,” and the general Bandera absurdity: the United States decided to take revenge for the failure in Syria in Ukraine. The revitalization of the United States in Ukraine is clearly in retaliation for the failure in Syria, for the supply by Russia of the C-300 anti-aircraft complexes of Syria.


The "Norman guarantors" of the Minsk agreements were silent and went into the shadows, while America emerged from the shadow of its Ukrainian Frankenstein. According to some experts, Kurt Walker, the US Special Representative for Ukraine, became the “Gauleiter” of Ukraine, given the Banch's authorities' pro-fascist past. And announced the lifting of the embargo on the supply weapons to Ukraine.

For Moscow, the policy of the United States and Europe in Ukraine speaks of the complete futility of the implementation of the Minsk agreements. The murder of the DPR leader Alexander Zakharchenko was committed by Bandera saboteurs with the participation of Western intelligence agencies, there is no reaction from America or Europe. "Norman format" is actually terminated.

Before the elections to the US Congress (November 6), Moscow is holding back, trying to strengthen the position of Trump as a more sane political force, compared with “mad” ones like Kurt Walker. Moreover, the bill goes on for weeks, and the process of recognizing Donbass has been launched: following the results of the November 11 elections, it will not be too late to make the appropriate statements.

Moscow’s recognition of the Bandera regime rests solely on the Minsk agreements. When experts demagogically exclaim: “Why did Moscow recognize these fascists?”, You can answer that you recognized on the “Minsk conditions”, then there was hope that the Minsk process would somehow remove the fascists like Paruby and Turchinov from the power in Ukraine. Overestimated the anti-fascist moods of Europe. And another thing: the alternative was the war not in Syria, but in Ukraine as in Syria.

Moscow is clearly preparing to move to a new policy not for Ukraine, the US State Department sees this and urge not to hold elections in the Donbas. Why? By recognizing Donetsk and Lugansk as parties fulfilling the Minsk agreements, further Moscow will deny the legitimacy of the Bandera authorities as not fulfilling the Minsk agreements. This may lead to “multidirectional processes” on Ukraine that has lost recognition in Moscow.

The sanctions announced by Vladimir Putin against Ukraine are formally motivated by the “unfriendly actions of Ukraine against Russia”, but in fact they are imposed for breaking the Minsk agreements. They can be followed by a complete rupture of economic relations.

It makes no sense for Moscow to maintain the stability of the pro-American military bridgehead being created, which Volker has already begun to pump arms. Russia begins to prepare for the energy blockade of Bandera, limiting the possibility of re-export of petroleum products through Belarus. True, the cessation of the remnants of commodity turnover with Ukraine will hit the Russian economy as well: these Siamese twins, who have grown together since time immemorial, cannot easily disconnect from each other.

What could be an attempt to revenge the United States in Ukraine? In the election race Poroshenko stands alone against all other candidates, and all of them are American henchmen! The curators from the USA support minor figures like the singer Vakarchuk, the State Department in the person of Mike Pompeo and his (!) Special representative Kurt Volker act separately, Trump does not make statements in Ukraine and writes off all the mistakes to Barack Obama. All this may end up with a new coup in Ukraine, which, as it were, sweeps away traces of the management of Ukrainian Frankenstein from the United States. Do not Americans lead to this situation in Ukraine?

Moscow officially took a wait-and-see attitude: Vladimir Putin at the Valdai Club said that he hoped for more constructive negotiations with the new Kiev authorities after the completion of the election cycle, or, we add, of a new coup d’état, a new Maidan.

In general, everyone is waiting for some kind of denouement in Ukraine. In the US Atlantic Council, Kurt Volker spoke with the message that Ukraine is a “normal state,” and no one even remembered the demand to create an Anti-Corruption Court in this country.

In general, we underestimate Kurt Volcker. He is not the US special representative, he is something more: the plenipotentiary successor to Senator McCain, the director of the McCain Institute. Volker is untouchable for President Trump and Secretary of State Pompeo, although formally he is their subordinate. Who does he represent? Obviously, the “Washington swamp” or the liberal establishment, they are neocons, the Clinton globalists are Biden, they are also a “deep state”. 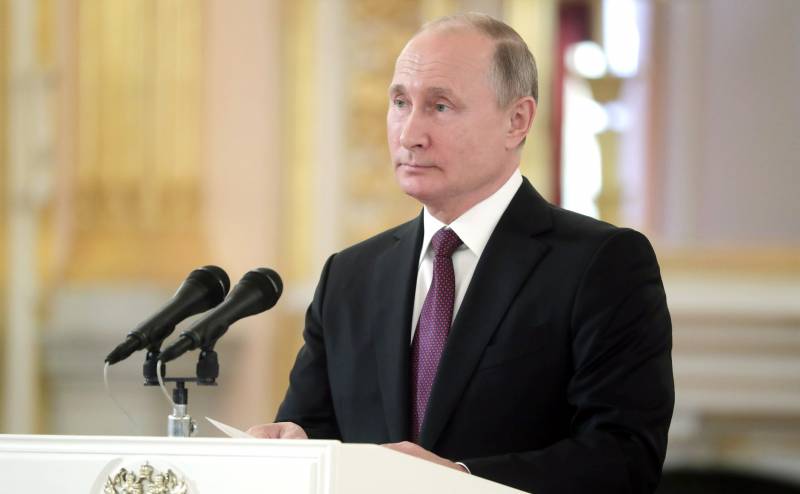 This "deep state" of the West professes the religion of its exclusivity and declares war to all who doubt it, Russia and China clearly doubt it. But in reality, the head of the Ministry of Defense, James Mattis, and the head of OKNSH, Joseph Dunford, that is, collective Trump, should fight. Here a contradiction arises in the position of the West, which Vladimir Putin and his advisers are trying to take advantage of. However, at the Valdai Club, he still showed the United States, just in case, and the “mother of Kuzma”: “Just die!”