October 16 2018
35
History the Angara ship of control is so full of myths and myths that even the original name of the future Angara, Aviso Hela or simply Hela, is still questionable. Therefore, despite all the controversies and disagreements, let's start from the beginning.


23 November (according to other data, 21, th) 1937 of the year in Hamburg shipyard "Stulken-Zon" was laid the ship control submarine forces of Germany - the floating base of submarines. And here begins the debunking of the myth of Hitler's yacht. This vessel was never intended for Hitler. The previous staff ship, upgraded from the minesweeper in 1923 year, was already outdated and did not meet the tasks and modern realities, therefore, the hull of the new ship began to grow on the stocks of Hamburg. That he will be destined to become "Angara". 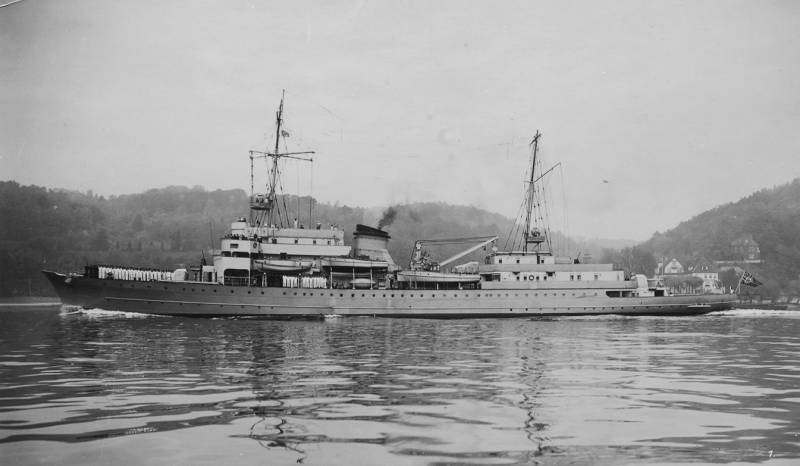 "Hela" with a crew built on the tank. At the stern, the flag of the navy of Nazi Germany is visible

The crew, according to some sources, could reach up to 259 sailors and officers, according to others - up to 190 people. In both cases, this number of crews was explained by the presence of a large volume of radio equipment in view of the tasks assigned to the control ship. In addition, the future Angara was equipped with the most advanced navigation equipment, an echo sounder, and also carried weapons on its board - two 105-mm guns in the bow and stern, one 37-mm SKC / 30 gun and two 20-mm Flak 30 guns There were also 15 guest cabins for staff officers and even a desalination plant for the needs of the crew and submarine guests. It was originally planned to install aviation catapult for Arado reconnaissance aircraft, but even before the start of construction, this idea was abandoned.

So what is the name of the ship carrying control on your board? Extremely often, the name “Aviso Hela” appears in a variety of sources, even trustworthy ones, which are also translated as “Running on the Waves” or “Running on the Wave”. First, I could not find a language from which the name “Aviso Hela” would translate as “Running” (wherever). And, secondly, why suddenly the gloomy Teutonic genius, for whom the limit of grace is Prussian barracks and Krupp steel, hit the lyrics of Heinrich Heine? 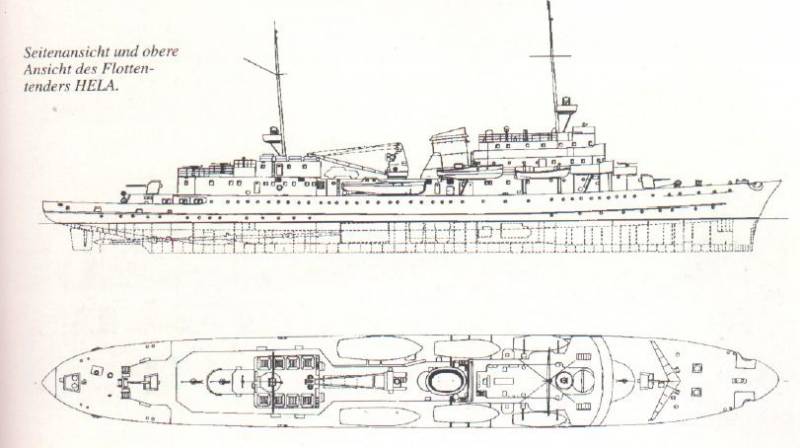 Most likely, there was no “Aviso Hela” at all. More precisely, the ship was, but it was called aviso "Hela". In this case, aviso (translated as “notification”) is not a popular term for the class of a ship. The advice notes were small, fairly high-speed warships that performed reconnaissance functions and, naturally, on the basis of translation, served as a kind of "messengers" performing control functions. Thus, built according to an individual project in a single copy and meeting all the characteristics of the “advice” class, “Hela” was often referred to this class.

Less than two years after the installation of all the necessary modern equipment in October 1940, Hela was incorporated into the Kriegsmarine. The first captain of the ship was Paul Schulz, the corvette captain, later Oswald Neumann replaced him in this post, who served as commander of the ship until the end of the war. The ship itself during the entire service in Germany was part of the unit commanded by Rear Admiral Leopold Siemens.

Naturally, the service as part of the German fleet the ship was saturated, but considering that it was the estate of Dönitz himself, very little is known about this period of the “staff ”’s life. According to various legends, the first persons of the Reich - Adolf Hitler, Hermann Goering, Martin Bormann, Heinrich Himmler, Rudolf Hess, etc., boarded the Hela. Again, according to legend, Hitler himself traveled to Hela. True, the journey was short, the ship in May 1941 brought him aboard the Bismarck and after a hysterical speech Adik returned the Fuhrer to the shore. But most likely this is just a legend, because to believe that the control ship of the submariner Karl Dönitz, whose “wolf packs” fought the battle for the Atlantic, was chartered to work as a pleasure yacht even for such a high-ranking scumbag.

In 1945, slightly damaged after the Hela air raid was captured by the Allies in the port of Eckenfjord, north of Hamburg. After the defeat of Germany by the decision of the Allied Commission for the division of the Nazi fleet, the ship Hela was transferred to the Soviet Union and transferred from Kiel to Swinemunde. And again, and in this case in the history of "Hela" there is a legend. When dividing ships, the floating “headquarters” Dönitz was recorded in destroyers. When the greedy demagogy of the Allies brought Vice Admiral Gordey Levchenko to white-hot, he cut the sheets with the names of German ships and scooped them all into his cap. As a result, according to the lot, we got the control ship, Levchenko “pulled it out” from the cap. 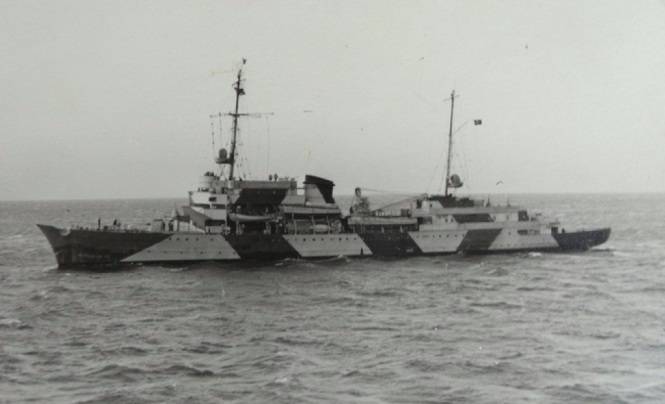 Initially, the ship was planned to be included in the Black Sea Fleet. For this purpose, a distillation team was formed in Sevastopol, not only hearsay familiar with the German ship mechanisms and the rest. When the team arrived in the Baltic, the decision was changed and left the former “Hela” in Baltiysk. Thus, 18 December 1945, our military officially adopted the ship, and he joined the Baltic Fleet. And on January 20 1946, the Soviet Naval Flag was hoisted on the ship. In March, the command approved the staff: 14 officers, 48 foremen, 118 sailors. Total - 180 man crew. 15 April 1946 of the year “Hela” was officially renamed Angara by order of the Navy Minister. Thus began the Soviet life of the former staff ship Karl Doenitz.

From 1946 to 1949, Angara actively participated in the campaigns and exercises of the Baltic Fleet. The elegant “Angara” with its subtle hull lines even made a long transition from the Baltic to the Northern Fleet. Under the flag of the vice-admiral Lev Vladimirsky, head of the naval schools, a detachment of ships in the Angara and the training ship Neman left the Baltic, rounded Scandinavia and entered Belushya Bay on Novaya Zemlya. "Angara" in those years made a real voyage to the north with a call in Murmansk, Arkhangelsk, Gremikha and Vaenga, which was attended by cadets of the Higher Naval School named after M.V. Frunze.

In 1949, the ship was unexpectedly transferred to the Black Sea, and already on July 9 of the same year, the Angara was officially incorporated into the Black Sea Fleet. 29 August 1948, captain-lieutenant Berngald, replaced the 3 captain of the Brovkin rank in his post, and he was engaged in the transition from the Baltic to the Black Sea, or rather from Baltiysk to Sevastopol. In total, during his career, the ship was commanded by ten commanders in the Soviet fleet. 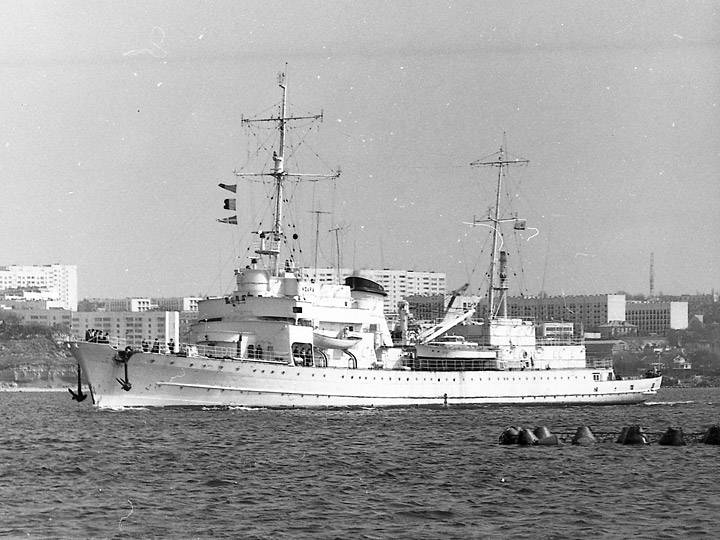 "Angara", already in the Navy of the USSR

The Black Sea service of "Angara" made the already myth-covered ship just legendary. Very soon, the Black Sea "Angara" began to be called "the royal yacht." Some gossiped that serving here was just a privilege and a sinecure, which naturally was pure myth. Firstly, since the ship was a staff building, this imposed a special responsibility on the crew. Secondly, almost immediately after the transfer to the Black Sea on the "Angara", or rather, on her team, the honorable duty to work as a representative ship and an unofficial pleasure craft of high government officials fell. I think you should not explain that the crew was required to keep the "Angar" in impeccable form. At that time, the ship had long lost its camouflage and was more like an elegant tilt of the masts towards the stern and the graceful silhouette of a snow-white hull that was a luxury yacht.

Only for 1954-55 years, USSR Foreign Minister Vyacheslav Mikhailovich Molotov, Defense Minister Nikolai Alexandrovich Bulganin, Chinese Defense Minister Peng Dehuai, Burma’s Prime Minister Wu, etc., boarded the Angara. Already from such a set of comrades with a characteristic “visit-effect” in any crew, the mood will wilt. For all the time, Angara met onboard Gorshkov and Vasilevsky, Suslov and Voroshilov, Khrushchev and Mikoyan, Jawaharlal Nehru and Indira Gandhi, Mohammed Zahir Shah and Urho Kekkonen and so on.