Not only caps have visors

October 7 2018
12
During the First World War, the development of all branches of military engineering equipment and, in particular, field fortification was observed. One of the most interesting questions is the question of the expediency of using “defensive peaks” in the trenches: some military authorities recognized their usefulness, while others denied the expediency of using them.


Of course, speaking of the benefits of using visors, we note that many factors played a role - the conditions of the location of troops, the terrain, the artillery capacities of the enemy, the psychological state of the fighters, etc.

It will be about defensive canopies - i.e., closures of the dugout type, which enable defenders of the trench, hiding behind a canopy from enemy fire, to be able to fire at the front area - through single loopholes or common gaps. 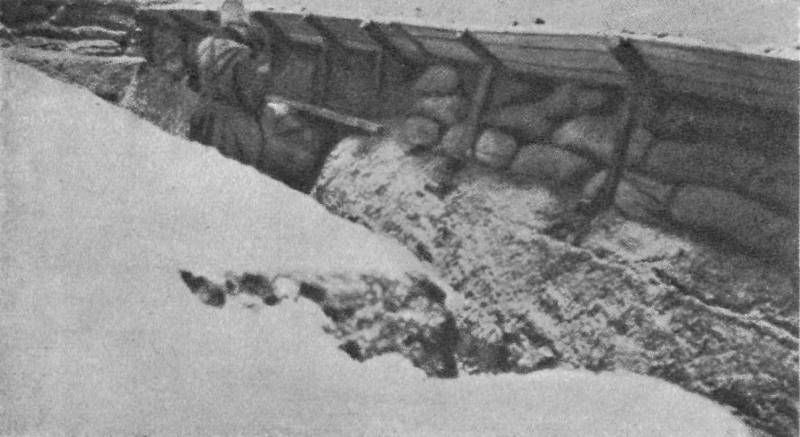 During World War I, Russian troops became very accustomed to visors, building them almost all over the trenches. They were also erected in large quantities during the construction of advance hardened rear positions. But towards the end of the war, voices were increasingly heard against such a massive use of visors, and some of the army commanders and corps commanders not only prohibited the organization of visors, but also ordered to dismantle previously built ones, considering them unnecessary, and in some cases harmful.Order on the troops of the 5 Army from 7 June 1916, No. 575 a - 82).

The main advantage of the defensive canopies as closures was that they enabled defenders of trenches to conduct rifle fire for a long time and at long distances under continuous artillery fire, usually covering the enemy infantry offensive. This circumstance is very important, especially if one takes into account that the enemy’s special artillery fire sometimes lasted until the complete rapprochement of his infantry with the Russian trenches. In the absence of visors (or covered loopholes), the Russian infantry could stand in the line of fire only after the cessation of the actions of the enemy artillery, and until then was forced to hide, lying at the bottom of the trench or being in shelters.

A) They sheltered shooters from rifle, machine-gun and shrapnel bullets, from hand grenades, from shell fragments, from small-caliber mines, from aviation arrows and small bombs;

B) They contributed to calm and high-quality shooting (at the beginning of the war, when the visors were rarely used, soldiers often fired, putting a rifle out of the trench and hiding their heads - which is why the bullets flew up) and preserving the cheerfulness of the defenders of the trench - people felt covered up and in relative safety; they saw through the loopholes only a small part of the tears of the enemy shells;

C) Covered from rain, snow and bad weather - so that people could sleep under the canopies and get up at the loopholes on alarm (while they often left the shelters and fox holes reluctantly);

D) Especially proved to be in the forest - where they not only better merged with the surrounding terrain, but also protected from the mass of fragments from trees destroyed by fire;

D) The Russian soldier loved visors and believed in their protection, hardly succumbing to the conviction that the visor would not save the direct hit of a whole shell, but only exacerbate the damage due to its own fragments.

But the visors are inherent and serious shortcomings.

1) When they hit artillery shells, they were destroyed, blocking the trench, which cannot be used until it is cleared. In addition, when the shell hit, the defenders of the trench were amazed by the fragments of logs and poles from the collapsing canopies. Therefore, the peaks are long and continuous throughout the trench.

2) They unmasked the trench from a long distance - attracting enemy fire.

3) Difficult to control platoons and squads, making it difficult to observe people.

4) Difficult air flow, maintaining dampness and stuffiness in the trench.

5) Interfered with the simultaneous withdrawal of all fighters from the trench to counterattack.

6) Demanding a lot of time and materials for its construction, visors did not exclude the need to build shelters and other more solid closures - to protect against enemy projectiles.

Thus, after weighing the advantages and disadvantages of using visors and analyzing the experience of using the latter, it should be noted that it is possible to completely abandon the visors only in a positional war - when the trenches were under constant threat of direct hits by enemy high-explosive and high-explosive shells from close distances (here reliable observation points and shelters for sentries). In a maneuverable field war, when the troops often maneuver, hastily securing the captured space, and when the first line of trenches is almost entirely occupied by arrows (because there are no subsequent lines, shelters, or communications in the rear), direct hits of shells into the trenches are unlikely (the distance to the enemy is not exactly known), but at the same time it is necessary to take shelter from shrapnel bullets and splinters - light visors are quite appropriate, especially if the shooters' heads are not covered with helmets.

Roofs made of thick logs, long and even more so throughout the trench, are most likely harmful and very dangerous for shooters when directly attacked by an enemy projectile. The most useful are the visors covering small areas of the trenches, on 2 - 3 people each, pursuing the goal - to cover the observers and excellent shooters operating during enemy artillery preparation attacks (the majority of the defenders during artillery preparation hide in shelters).

A particularly important issue is the quality masking of visors. And here the troops came to the aid of the paint-masking (see Cement camouflage).

So that when the visor collapses, they do not impede movement around the trench, behind the visor they form an open top opening, covered from the inside with a small embankment that masks the lumen of the slot (loopholes) of the visor and at the same time protects the shooters from reverse shell fragments. Sometimes a step or other similar device was built on the back slope of the trench ditch, against the visor.

The light covering of the visor (poles, boards or wicker covered with turf) was not only sufficient to protect against shrapnel and rifle bullets, but was also safe when the visor was destroyed and facilitated the construction of the closure by the forces of the fighters themselves.

As a result, it should be noted that since the hitting of whole shells into the trenches were generally not so frequent, with rational use, visors during the First World War were of great benefit - reducing losses in the trenches and beneficially acting on the psyche of a fighter. 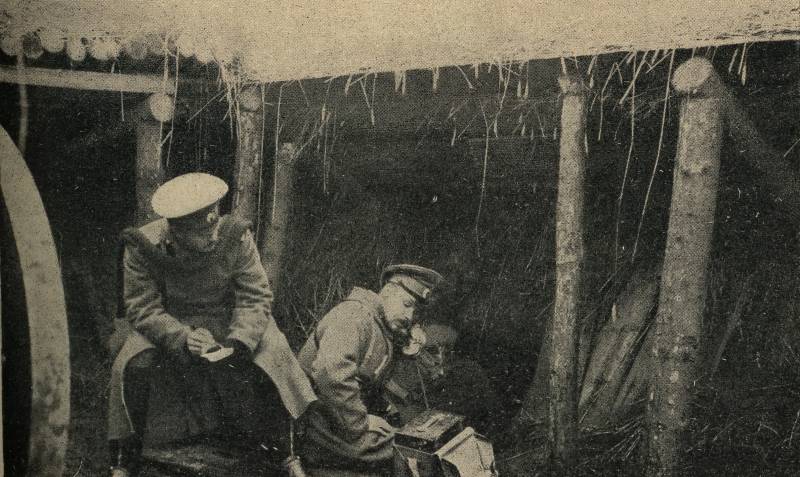