August 6 2018
120
Russia has deployed Su-35 fighter aircraft of the Russian Aerospace Forces on the island of Iturup of the Kuril ridge for combat-duty duty, the blog bmpd reports citing the Sakhalin web resource Sakhalin.info. The planes are located on the Yasniy airport, which was commissioned in the 2014 year, which is jointly used for civil and military aircraft. 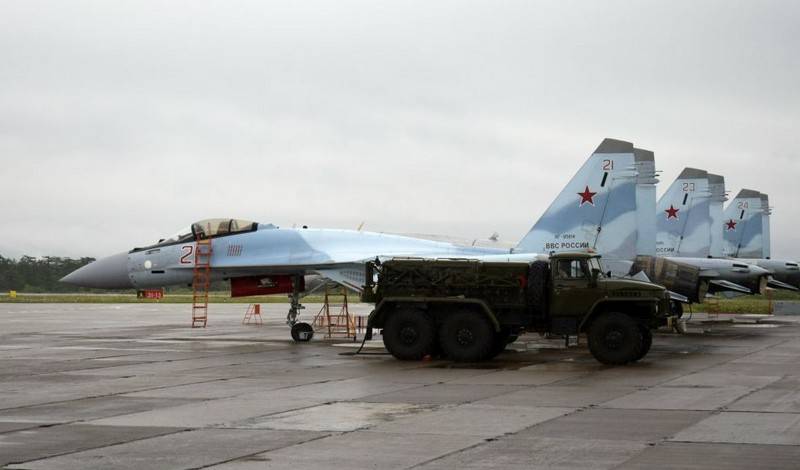 August 3 at the airport in a festive atmosphere, deputy commander of the 11th army of the Air Force and Air Defense, chief aviation Oleg Solovyov congratulated the pilots, technicians and engineers of the ground service on a significant event. The command was read out to the personnel, and within an hour at the airfield, taxiing work began on the strip.

The deployment of Russian fighter Su-35 on the island of Iturup has already responded in Japan. Tokyo announced a protest against Moscow over reports of fighter jets in the southern Kuriles, Secretary General of the Cabinet Yoshihide Suga said at a briefing on Monday. The protest was sent on August 3 to the Russian Foreign Ministry through the Japanese Embassy in Moscow.

Recall that Japan claims the islands Iturup, Kunashir, Shikotan and Habomai, not leaving attempts to regain the "northern territories", which became part of the USSR in the aftermath of the Second World War.

Ctrl Enter
Noticed oshЫbku Highlight text and press. Ctrl + Enter
We are
At the airfield Dzemgi in BBO Su-35S fighters are on duty with missiles RVV-SDSu-35 2013 built at the airport Dzemgi
Military Reviewin Yandex News
Military Reviewin Google News
120 comments
Information
Dear reader, to leave comments on the publication, you must sign in.