In the Strategic Missile Forces, an automated combat control system of a new generation is being introduced. 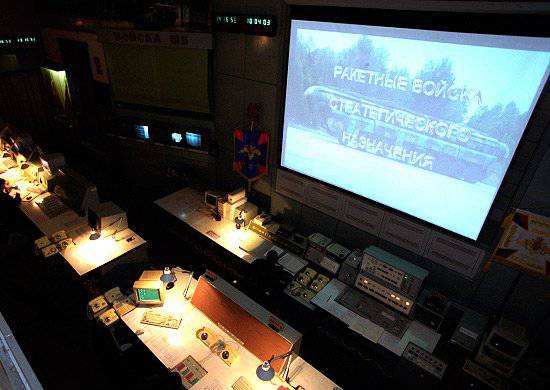 The Strategic Missile Forces (RVSN), together with the defense industry enterprises, have begun to modernize command posts in 3's missile formations. In the course of the modernization, it is planned to implement the introduction of the fourth-generation automated combat control system (ASBU) units, based on a digital combat signal transmission system.

The new ASBU, along with the solution of traditional tasks of bringing orders, collecting reports and monitoring the combat readiness of launchers, provides an automated change of application plans and operational redirection of missiles. The ways of bringing orders and collecting reports of the system are formed by wired, radio and satellite communication channels and possess the necessary survivability and noise immunity. At the same time, combat command and control orders are brought directly to the launchers, bypassing the intermediate links, including under conditions of nuclear influence and intensive electronic suppression.

In each set of equipment created using the new domestic element base, 3-multiple redundancy of the communication system and data transmission is provided, and troubleshooting in the equipment is localized to the accuracy of the typical element to be replaced.

Further improvement of the ASBU is associated primarily with the improvement of the control systems of the Armed Forces of the Russian Federation as a whole, as well as the need to control the nuclear missile weapons new generation. The basis for building promising ASBU units is a functional set of unified technical means that ensure high reliability and security of information transfer. They possess such properties as compactness, low power consumption, secrecy of information transfer, resistance to external influences and reliability of operation.

Under conditions when the importance of each launcher and combat unit increases, the role of the control system of strategic nuclear forces increases significantly. All this is ensured by the continuity of the collection of reports in the RVSN management system, as well as the high reliability of the equipment of its control units.
The implementation of work on the creation and implementation of the latest types of communication technology and control automation allows not only to maintain the existing level of reliability of the control of the Strategic Missile Forces, but also significantly increases the sustainability of the control of the Strategic Missile Forces in the most difficult conditions.