What with the state defense order? The meeting is chaired by the Supreme 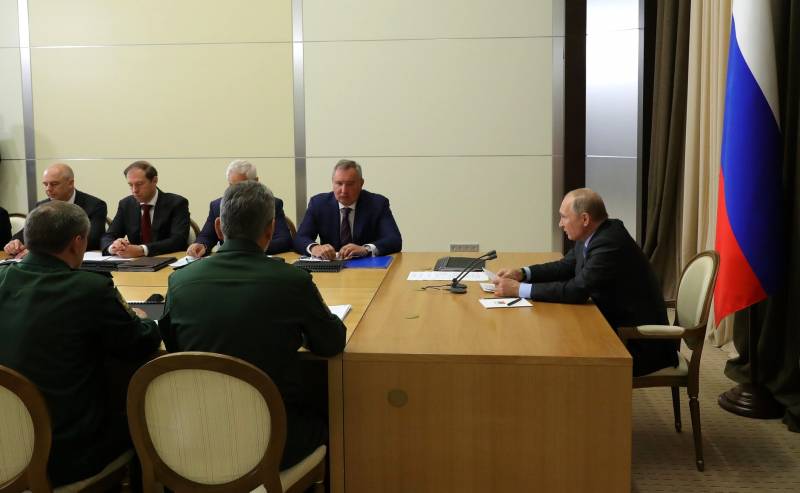 As the presidential press secretary Dmitry Peskov told reporters earlier, "a series of military meetings with the president will be devoted to state defense orders, the development of the military-industrial complex and army building."

According to him, the final meeting will be held on Friday. On the same day, the head of state will meet with Russian Prime Minister Dmitry Medvedev on the personal structure of the new government and negotiate with the German Chancellor Angela Merkel.

Obviously, we must move on, consistently modernize the army and navy, develop them in all major areas,
Putin said during the first meeting on Tuesday.

In particular, the president focused on the need to speed up preparations for the mass production of the latest C-500 system capable of operating at very high altitudes, including near space, as well as upgrading the Pantsir complex.

It is necessary to continue to equip parts and formations with the latest weapons and equipment, including combat vehicles based on the Armata, Kurganets-25, Boomerang, and Typhoon unified platforms, as well as providing the personnel with modern Ratnik equipment,
Putin stressed.

The theme of the meeting on Wednesday was the development of the Russian Navy.

Building combat capabilities fleet, the practice of long sea voyages, exercises, trainings should certainly be continued. This year, 102 campaigns of ships and submarines are planned,
said the head of state.

He noted that in connection with the continuing threat of attacks by international terrorists in Syria, "in the Mediterranean Sea, Russian ships with cruise missiles Caliber will bear a constant combat watch." According to the President, the Russian Federation will continue to equip the Navy as part of the state program of armament with the latest systems weapons, communication, intelligence.