About aerospace bombs. Can afford, right? 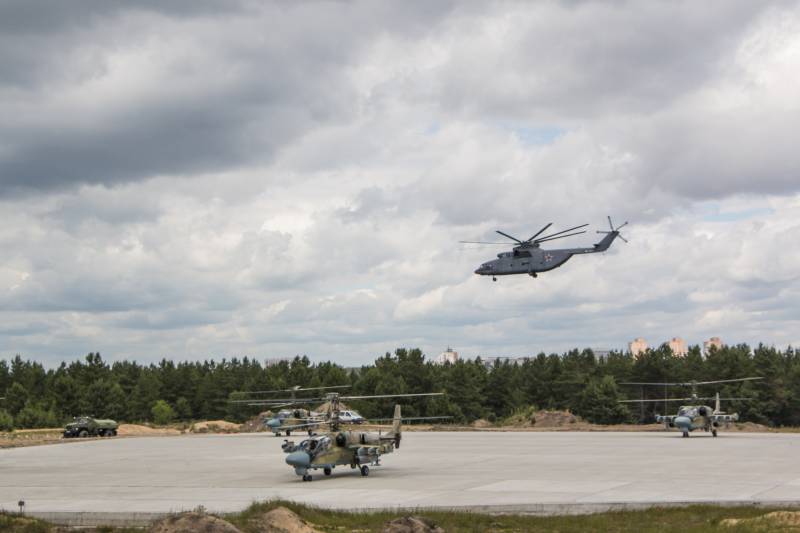 We continue the theme of the outrages that happen with someone's light hand in aviation structures of the Western Military District.

We will not go into details yet, looted money there for the reconstruction of the airfield, or sent it to another place, you can just wait for December 2018 of the year and see firsthand whether or not Sergei Kozugetovich was framed.

But we will now talk about people in more detail and on the basis of a couple of documents that have come to us, so to speak, in sight. There is nothing secret in the documents, and as it was, we diligently painted over.

So, in the previous article we said that there are some problems in one air regiment. There are several problems. Financial, for example. This is when people are forced to rent housing at their own expense, since it is not possible to provide them with official services or give them money for sublease.

We anticipate statements like "what's up here, these are pilots, they won how much they get."

We agree. Almost unconditionally. Yes, these are pilots. And they get really big salaries. So what? Well, let's approach this way to everything. Let them, the pilots, just get a lot, the roads are being repaired. Airplanes of their own. Baltimore airfield let them finance. They are pilots, right?

And the fact that there are things that you compensate for a two-way salary ... Who among the grumbling is ready to trade with Peshkov for a salary? Filipov?

Go ahead. Flight personnel - he, of course, yes, flight. However, who knows how many people should work so that the pilot and navigator take off and complete their task? Engineers, technology. Engineers, technicians, hydraulics, electricians, gunsmiths ... Meteorologists, cooks, quartermasters, drivers, tankers and others?

The regiment consists of two squadrons of 12 aircraft. And under 800, a man of personnel. Then the calculator and all questions are removed from the agenda.

Yes, of course, there are local specialists, buturlinovskie, there are employees of military service. But at least half of it is as good as it is.

The situation is simple to ugliness. In pursuance of an order from the High Command, the local command from the 23326 military unit simply spat on its subordinates from the 45117 military unit.

Now it's time to look into the documents. Suddenly we misunderstand something? 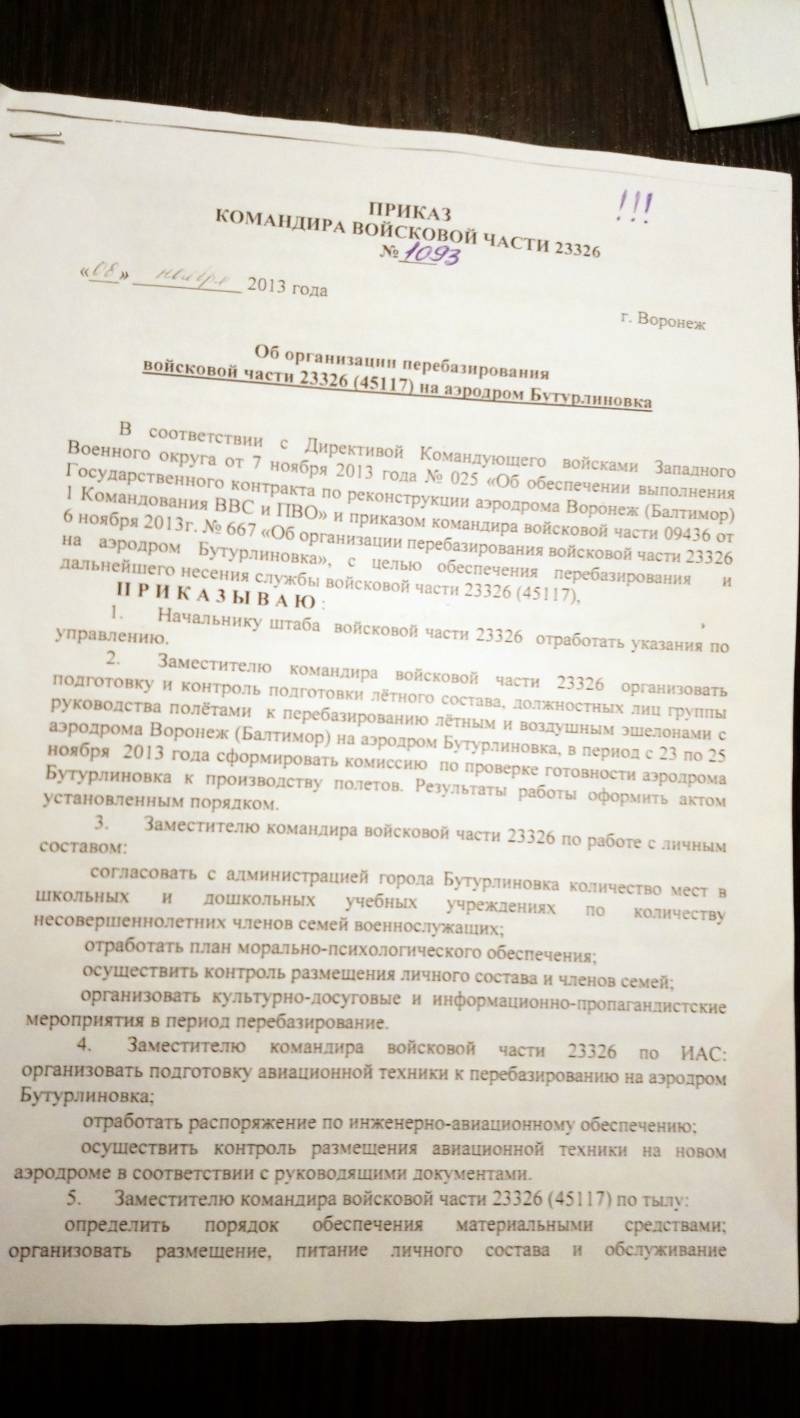 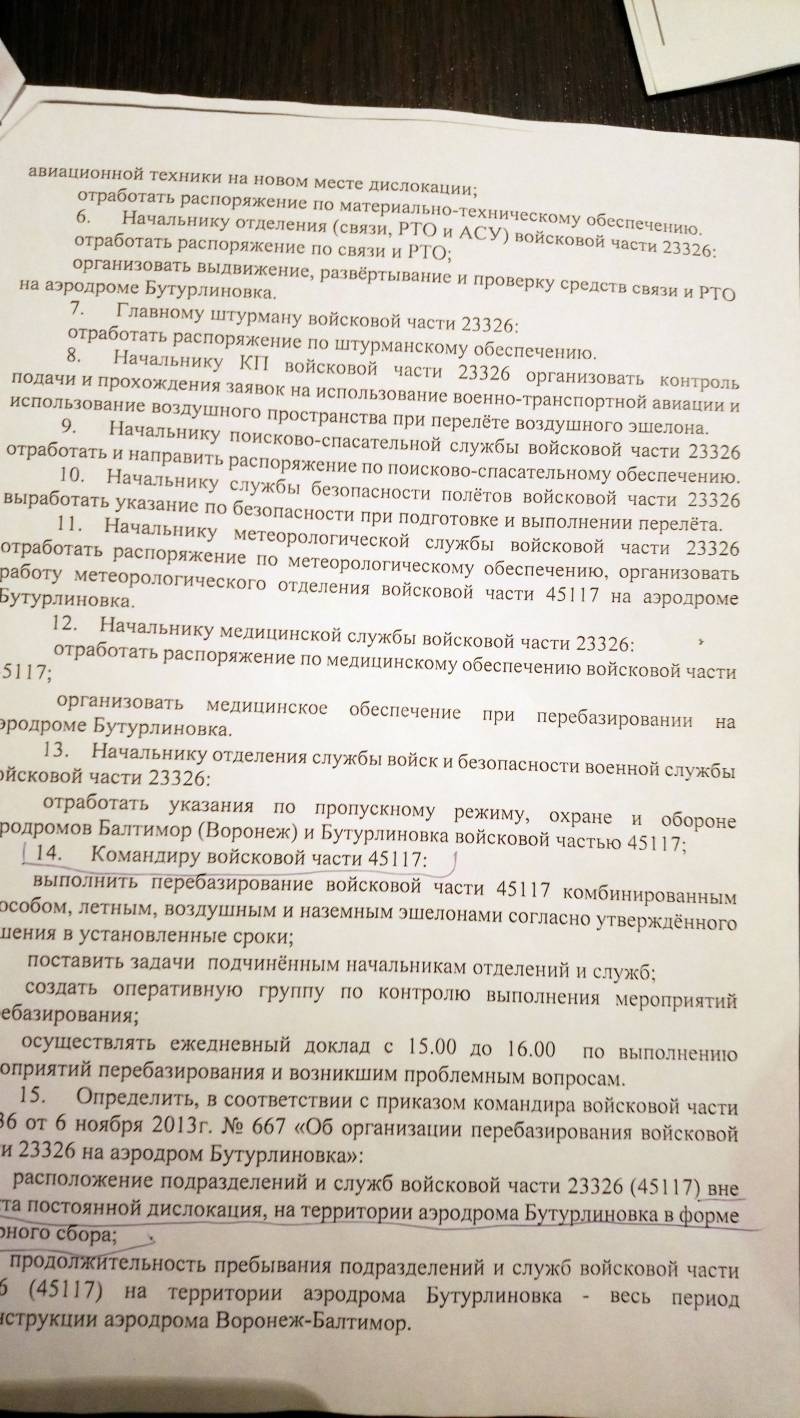 The order was signed by the commander of the military unit 23326 Guard, Colonel V. Shkolenko, and the temporary headquarters of the Guard, Lieutenant Colonel S. Savvin.

The text of the order, if you read it, does not say a word about how long the military personnel of military unit 45117 will be at the airfield in Buturlinovka and on what grounds.

Short and clear - relocate during the repair of the airfield in Voronezh. Over 250 kilometers.

Relocation, of course, was made. Army all the same. And then the questions started. Regarding the accommodation, about what and how will be with the families of the military, suddenly transferred from the place of permanent deployment for an indefinite time.

And then the interesting moments began.

A year later, appeals to the prosecutor's office began. It is clear that, facing a choice, to pay for a one-room apartment in the urban-type settlement 15 thousand rubles, by no means all the military personnel rejoiced. And who was not happy, he was delighted with the prospect of riding to work and back for 250 kilometers. You want - every day, you want - for the weekend.

Send letters and complaints. And, for some, there was even a reaction. Here, for example, is one of the telegrams. 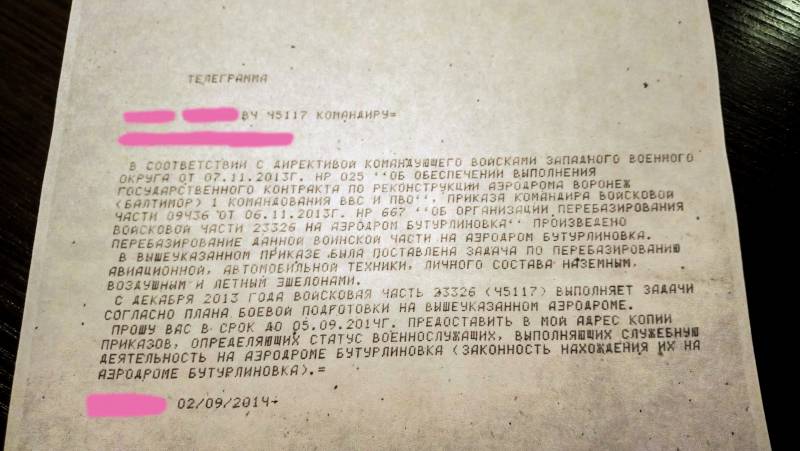 It asks the question quite clearly: on what grounds, legal or not, are the servicemen in Buturlinovka.

And - here they are, miracles! 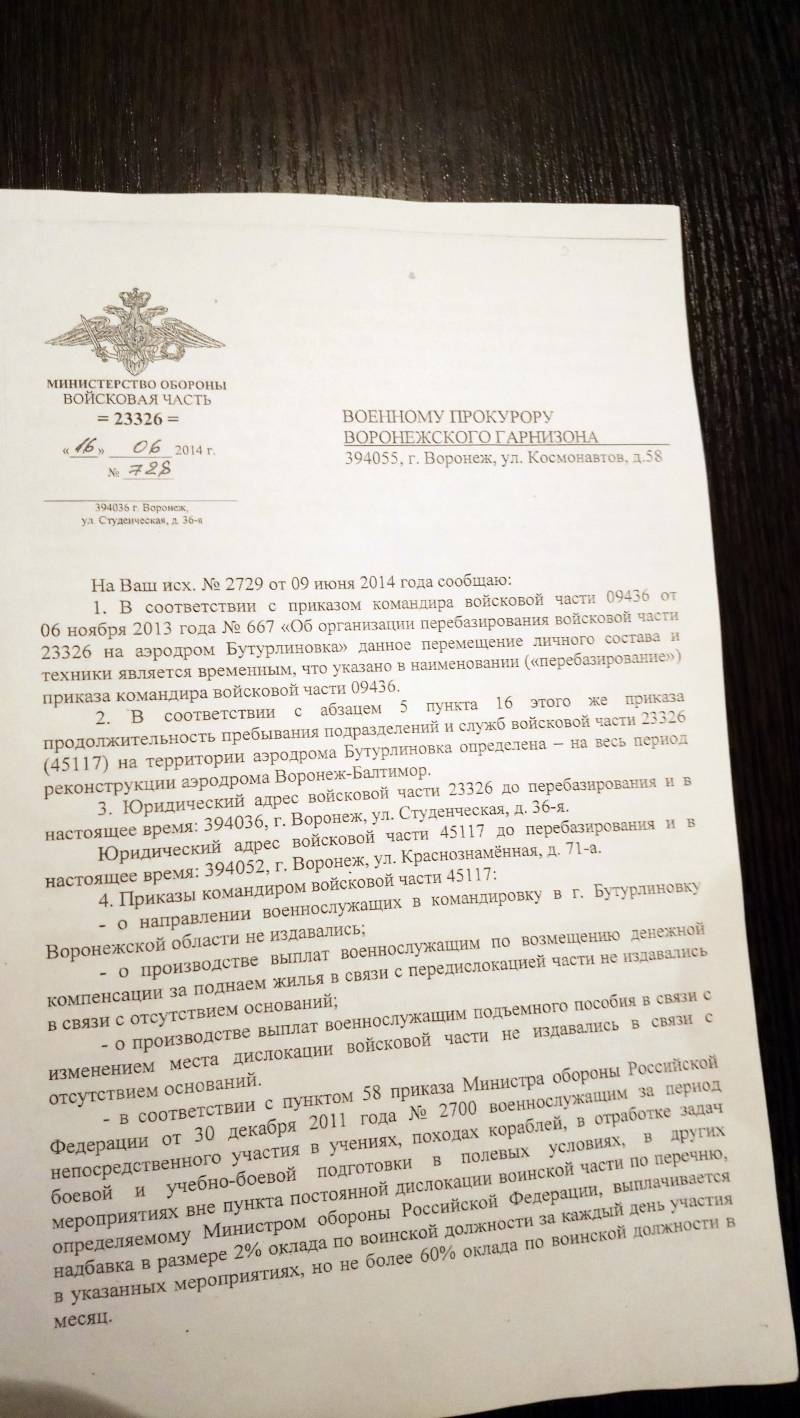 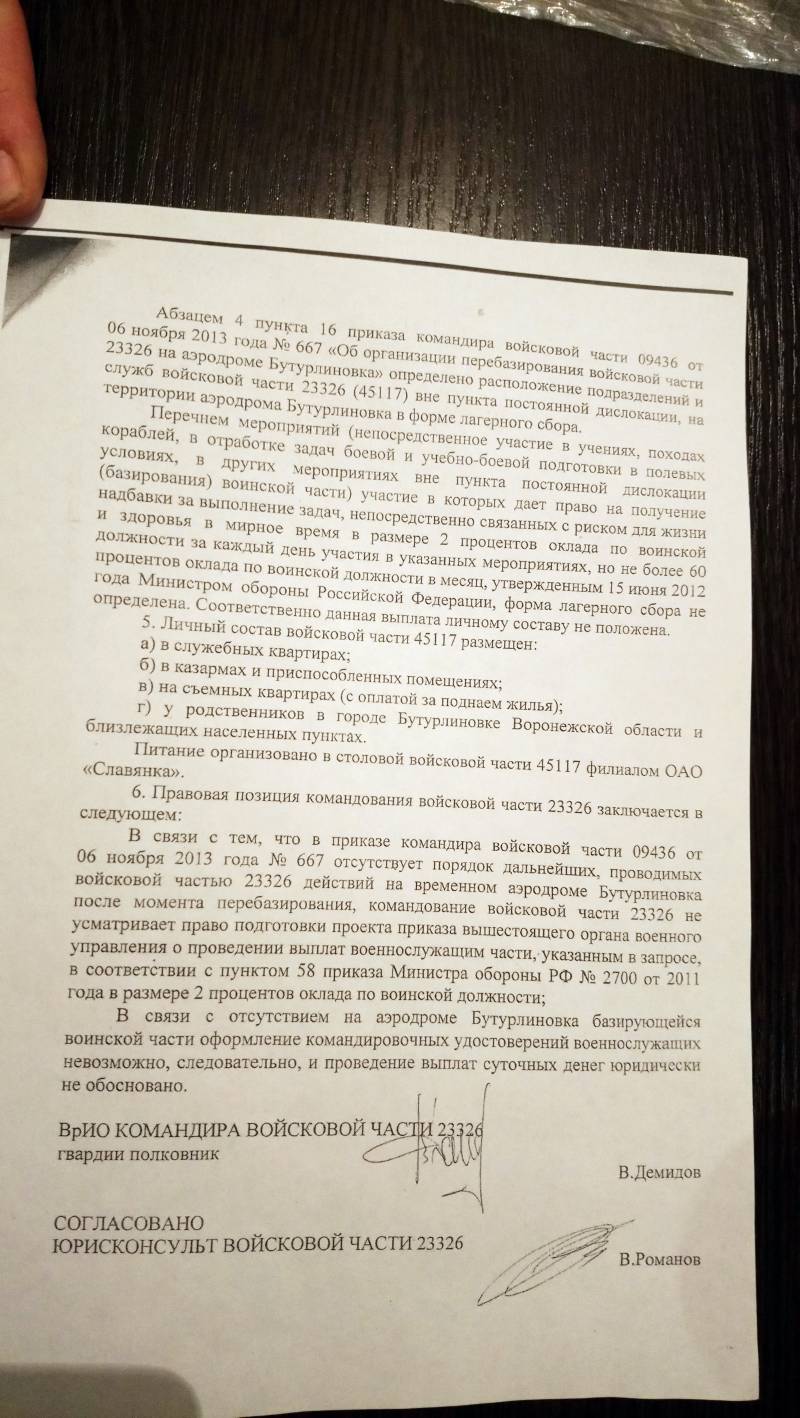 Here is just a masterpiece response from the commander of the 23326 guard, Colonel Demidov, to the request of the military prosecutor's office of the Voronezh region. It shakes its simplicity. From the answer follows:

1. The military personnel of the subordinate 45117 military unit were sent to Buturlinovka not on a business trip. There was no such order. Flight and technical trains are simply off fees. Indefinitely. Charges are not a business trip. So that…

2. Monetary compensation for sublease housing military is not allowed. There is no reason for this. Charges are fees. I don't care if they last more than 5 for years, nobody cares. In the tent, no problem. And if you want in the apartment but with heating - if you please, take care.

3. Well, about lifting (transportation of belongings, etc.) we do not even speak.

4. With point 58, the order of the Minister of Defense No. 2700 also showed. This regards 2% supplement for field conditions. What does the order say? Exercises, training of training and combat tasks in field conditions and other activities OUT of the point of permanent deployment.

PPD, recall, in Voronezh. But this is not confusing fellow Colonel. The regiment, in / h 45117, sent to CHARGES !!! So money is not allowed.

At this point, the colonel is just lying !!!

Well, the fact that he tells the prosecutor's office that everything is fine with the military from the 45117 military unit, particular attention should be paid to the item 5 sub-item “c”. Where it is said about accommodation in rented apartments with payment for sublease housing.

Although above, in paragraph 4 Demidov calmly writes that there is no reason to pay for sublease housing.

Comrades commanders in ZVO, is this normal?

In general, the brave commander of the military unit 23326 simply sent his subordinates to hell with all the payments.

And the Voronezh garrison prosecutor’s office, with great pleasure, began to stamp answers and send to all inquiries. 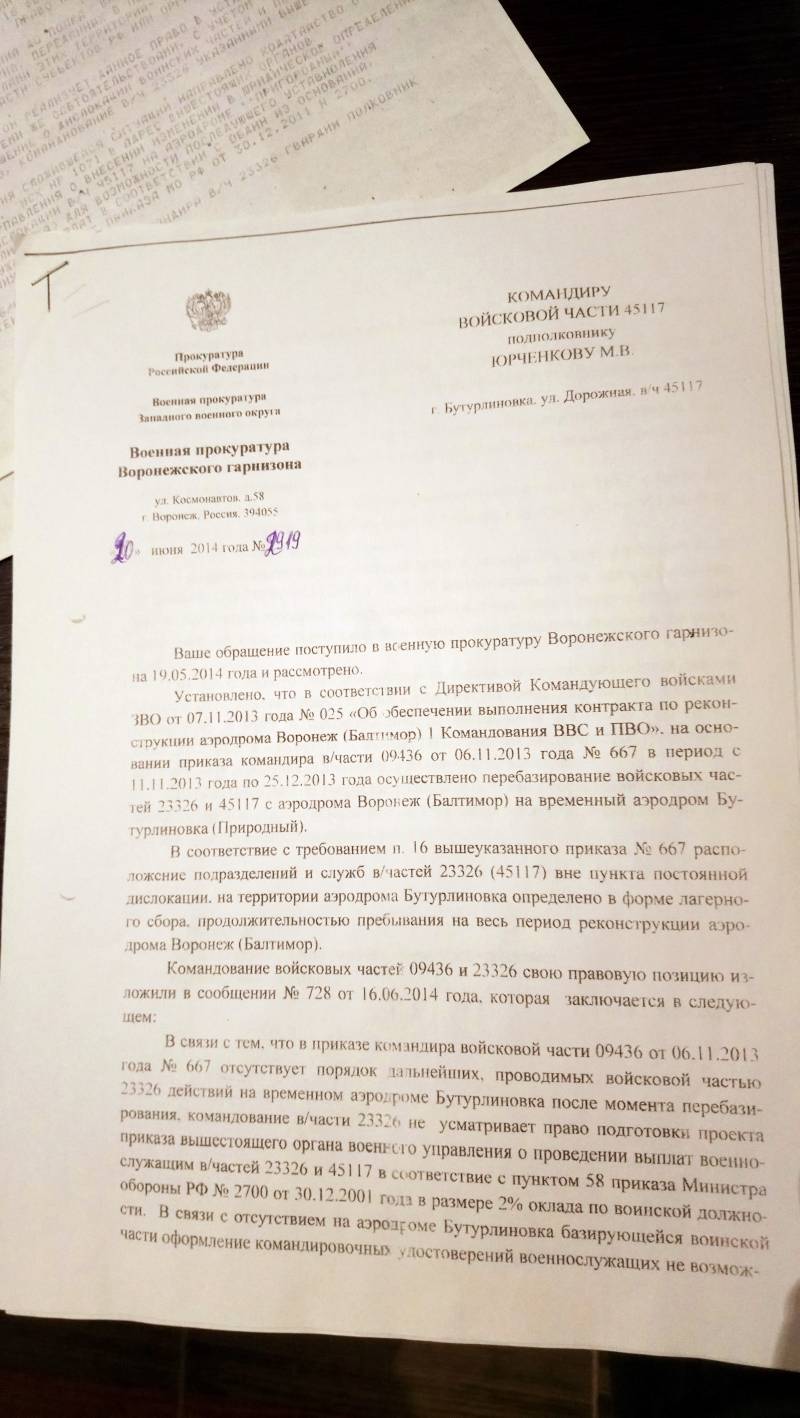 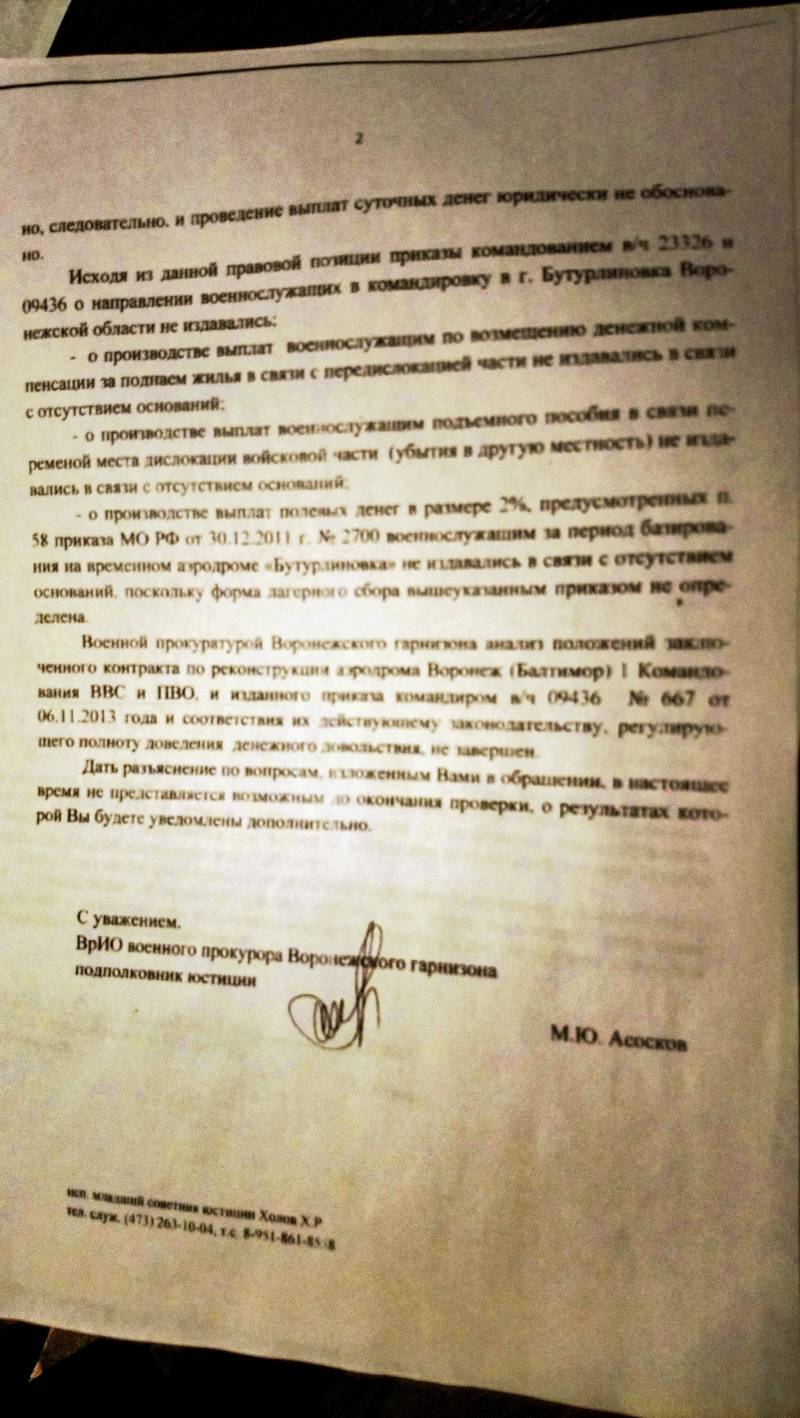 Comrades pilots, engineers, technicians and others from the 45117 military unit!

We write in black and white! ARE YOU OK!

You have been at military training camp for five years! You are military pilots and specialists, the support of the Russian army!

Therefore, it is absolutely not necessary for you to live in a city with a population of over one million, along with your wives and children, your children are not obliged to see you every day, you do not have to live in human conditions.

After all, you are pilots and aviation specialists! Well, one must understand!

In general, for saving money, commanders of the Western Military District can probably reward everyone in the 23326 military unit. How much they saved in five years is hard to say.

Another question is that patience ends with everyone. And the stream of letters and complaints will sooner or later overrun through the dam, organized by the command of the military unit 23326 and the garrison prosecutor's office.

It is clear that from Buturlinovka, where the 45117 military unit continues to live on obscure grounds of the military unit, you don’t scream too much. But even in the higher headquarters, in the division, in the 23326 military unit, normal officers understand that there is a lawlessness.

Otherwise, where did these documents come from?

Right, from there. And this is the only way to show that we do not take everything from the ceiling.

In general, in the aforementioned division, not everything is the way they want to show "in the picture." Unfortunately, for the beautiful window dressing is not visible often everyday and everyday problems. Which no one wants to solve.

Apparently, our command can afford to spit on their subordinates. Despite all the Syrian and other merits.