April 26 2018
84
Wrangel became the head of the White Army under pressure from the Entente, which is another clear confirmation of the pro-Western and puppet nature of the white movement.

After the Crimea, Peter Nikolaevich went to Kiev, where he decided to cooperate with the Hetman government, P. P. Skoropadsky. Wrangell as a whole speaks favorably of General Skoropadsky. However, their political interests diverged. Wrangel was ready to accept the German orientation, but he categorically did not share Skoropadsky’s ideas about the formation of a “separatist” Ukraine. Wrangel was ready to serve the hetman only if he "thinks of Ukraine in the first syllable of Russia."

As a result, Wrangel decided to join the Volunteer Army. In September 1918, the baron arrived in Yekaterinodar. Here he was very warmly received by A.I. Denikin, who gave him command of the first brigade, and then 1-th cavalry division. At this time, the Volunteer Army attempted to nominate only members of the Ice Camp, to the highest command posts, but an exception was made for Pyotr Nikolayevich. He was a famous cavalry commander, and the whites needed his talent and popularity. As a close friend of Denikin’s family, D. V. Lekhovich, wrote: “The services that Wrangel provided to the army met the expectations. From the very beginning, he showed himself to be an outstanding cavalry commander, well versed in a combat situation, able to take responsibility, to make decisions on the spot. Having appreciated the qualities of a commander in him - the art of maneuver, impulse and energy, General Denikin, completely trusting Wrangel, advanced his service with sincere joy ”.

Wrangel fought on the Maikop direction. In October, Armavir was captured, and in November - Stavropol. By the end of the year, Peter Nikolaevich was given command of the corps, as well as epaulets of the lieutenant general. At the end of January 1919, during the next reorganization of the white army, Wrangel became the commander of the Caucasian Volunteer Army, which very quickly liberated the North Caucasus from the Reds. General Wrangel sought to collect the cavalry into a fist and throw it into a breakthrough. It was the swift attacks of the Wrangel cavalry that determined the result of the battles in Kuban and the North Caucasus that was positive for whites. In May, Wrangel assumed command of the Kuban army, which, under his command, stopped the advance of the 10 Army of the Reds and forced them to retreat to Tsaritsyn. Then Wrangel launched an attack on Tsaritsyn. A major military victory for the Baron was the capture of Tsaritsyn 30 on June 1919 of the year, which had been stormed by ataman Krasnov three times before.

At this time, there was a conflict between Denikin and Wrangel, which eventually resulted in an open confrontation. Obviously, Wrangel’s sharp nature, his ambition and obvious dictatorial manners played an important role in this dispute. Wrangel, apparently believed that he would cope better with the case than Denikin. Baron believed that the commander-in-chief did not have enough scale, political instinct, “rush”. In his memoirs, he blames Denikin for provincial origins, a petty-bourgeois and liberal mentality, prejudice against the aristocracy, the court and the guard. Also, according to Wrangel, Denikin was afraid of conspiracies, allowed white terror and looting in the white-controlled territory, pushed the Cossacks away from his actions and did not solve the land issue. It is worth noting that Wrangel also spoke negatively about other leaders of the white army. He writes about Shkuro as an organizer of robbery, drinking and debauchery, a partisan, and not a serious military commander. Criticizes the baron generals Mamontov, Slashcheva and many others.

Militarily, the conflict flared up because of the choice of the strategic direction of the offensive of the White Army. Denikin considered Kharkov to be the main direction, followed by movement to Moscow. Wrangel also insisted on the primary importance of fighting on the Volga, followed by connection with the army of Admiral Kolchak. After signing the summer of 1919, the famous "Moscow directive" Denikin, the situation worsened. This directive, according to Wrangel, "was a death sentence to the troops of the South of Russia." The Black Baron received the task of attacking Moscow through Saratov and Nizhny Novgorod. The main forces and assets of the Whites went to Ukraine, from where the May-Mayevsky Volunteer Army developed. Wrangell also believed that the army should not attack Moscow in three different groups, and again complained about the lack of reinforcements (as during the operation to capture Tsaritsyn). Denikin, on the other hand, believed that the area of ​​Wrangel’s army was auxiliary compared to other armies. As a result, exhausted, exhausted by the previous battles, Wrangel's army could not successfully move forward: soon it was thrown back to Tsaritsyn, where it was entrenched.

In the fall of 1919, the Red forces regrouped and defeated the white forces advancing on Moscow. In December, Wrangel received the Volunteer Army, which fought in a strategic direction, but he failed to stop the retreat. Arriving in the army, he was faced with their complete moral decay, rampant drunkenness and robbery. Petr Nikolaevich tried to restore order, but time was lost. It is worth noting that looting invariably caused the anger of Peter Wrangel. In all areas controlled by him, he brutally imposed order, cracked down on marauders, disciplinary offenders. Victims of field courts were hanged in the center of the cities, so that others would be discouraged.

At this time, the conflict with Denikin flared up with a new force. Wrangell believed that the army should be withdrawn to the Crimea, the commander in chief demanded a withdrawal to the Don. As a result, Wrangel tried to organize a meeting of army commanders in Rostov, but received Denikin’s firm refusal. The commander in chief rightly saw this as an attempt to make a revolution in the leadership of the Armed Forces of Southern Russia. 2 January 1920, Denikin withdrew Wrangel as Commander of the Volunteer Army. Wrangel had supporters among the right-wing part of the white movement. Some generals suggested that Wrangel be appointed commander of the troops in the Crimea, but Denikin was opposed. In the end, Denikin ordered Wrangel to leave the territory of the Armed Forces of the South of Russia. Before leaving for Constantinople, insulted Peter Nikolaevich wrote an evil and detailed letter about stories relations with Denikin, which became the property of the general public. 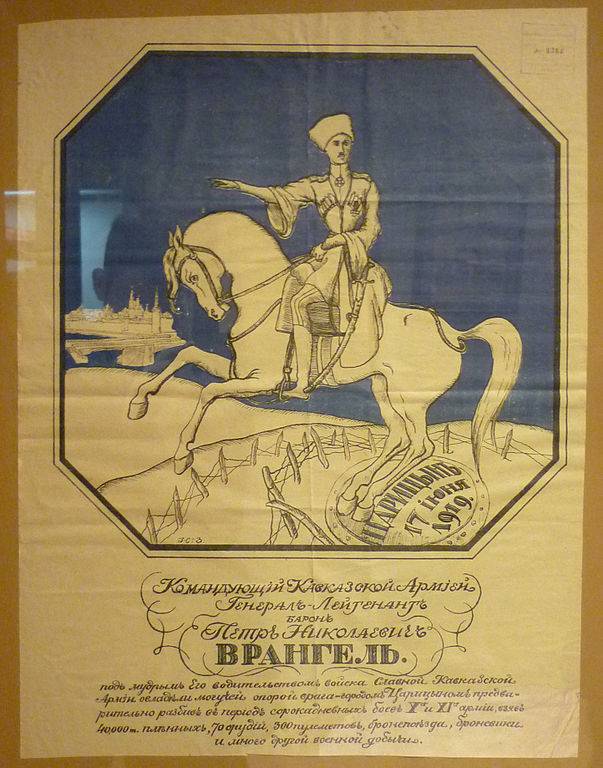 Ruler of the South of Russia

In March, 1920, Denikin refused the post of commander of the All-Soviet Union. And then, under the pressure of the Entente, he appointed Wrangel as his successor, which is another clear confirmation of the pro-Western nature of the white movement. Wrangel arrived in Sevastopol on the British battleship "The Emperor of India" and took command. In one of his first orders, the new commander-in-chief assumed for himself the full power - he assumed the title of “Ruler and Commander-in-Chief of the Armed Forces in the South of Russia”.

Wrangel considered the Crimea "the last strand of the Russian land", where a handful of heroes lead a desperate struggle for the freedom of Russia and for Russia as such. Therefore, within six months of 1920, when the baron was “the ruler of the South of Russia”, he tried to take into account the mistakes of his predecessors and boldly went to previously inconceivable compromises, trying to win over various forces of the Civil War (“Though with the devil, just to ! ”). So, he recognized the need for a federal structure of Russia. He tended to recognize the political independence of Ukraine with the aim of concluding a military alliance with the army of the Directorate of the UNR Petliura (by that time almost lost control over the territory of Ukraine). He recognized the independence of the mountain federation of the North Caucasus. I tried to establish contacts with the Menshevik government of Georgia, the leaders of the rebel formations of Ukraine, including Makhno, but did not succeed. But smaller gangs of "green" willingly entered into an alliance with Wrangel.

Wrangell understood that without agrarian reform, the provision of land to the peasants and the support of the peasantry, no victory was possible. Therefore, he recognizes the redistribution of land in the village. The established government of A. V. Krivoshein carried out a number of long-awaited but already belated reforms. The main thing was the "Land Law", adopted by the government of 25 in May 1920. It was based on the provision of ownership of most of the land to the peasants. He recognized as legitimate the seizure of landlords by the peasants in the first years after the revolution. True, for a certain cash or kind ransom in favor of the state. The government reformed the local government with the formation of volost land institutions, in which peasants played an important role. Wrangel sought to attract the Cossacks to his side, promulgating a number of decrees on the regional autonomy of the Cossack lands. He patronized the workers, adopting a number of provisions on labor legislation. Peter Nikolaevich reorganized the army, actively fought against looting and the disintegration of troops.

However, the defeat was inevitable. The fight in the Kuban and Don was lost. The Red Army won and established control over the main part of Russia. The territory of the Crimea was too weak a springboard for the white counter-offensive. Strong allies were not. England saw that the whites had lost the war, in fact refused to further support the Wrangel government, offering to turn "to the Soviet government, with a view to achieve an amnesty." General Wrangel will write later in his memoirs: “The refusal of the British from further assistance to us took away the last hopes. The position of the army was becoming desperate. But I have already made a decision. ” Therefore, France became the main external ally of the white Crimea. Paris morally and financially encouraged the white offensive in order to support Poland, which got involved in the war with Soviet Russia in the spring of 1920. France has traditionally supported the Poles, getting a tool in the fight against Germany and Russia. They used whites as “cannon fodder” to divert the attention and forces of the Red Army from Poland. 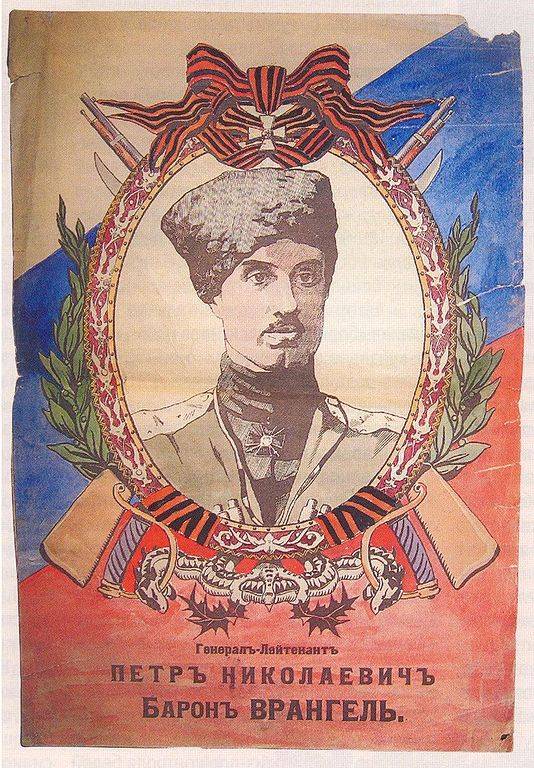 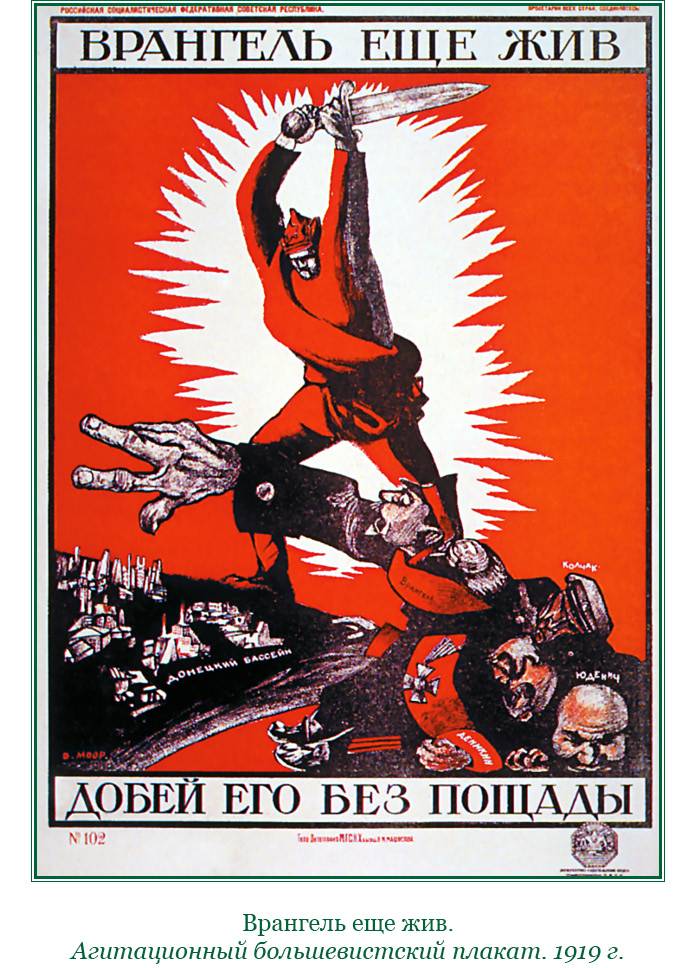 The summer offensive of Wrangel's army brought separate victories, but all this only delayed the end of the white movement in Russia. The autumn offensive of the Red Army put an end to the Black Baron’s government. In November 1920 of the year, the red troops of the Southern Front, commanded by M. Frunze, with the support of the Makhnovist units, broke into the peninsula. Wrangel had to order the evacuation.

Baron settled with part of the troops, first in Turkey, then in Yugoslavia. In emigration, the baron tried to preserve the fighting capacity of the white army. It was hoped that sooner or later a major Western power or a coalition of countries would start a struggle with Soviet Russia, and then the whites would be useful in the war against “Bolshevism.” In 1924, the Russian Military Alliance (EMRO) was created - the largest military organization in exile. The leadership of this organization Wrangel handed over to Grand Duke Nikolai Nikolaevich Romanov. Wrangell himself moved to Belgium, where he wrote memoirs. His health deteriorated due to his illness and injuries. He fell ill and died on 25 on April 1928. According to the version of his family, the NKVD agents poisoned the Baron.

Ctrl Enter
Noticed oshЫbku Highlight text and press. Ctrl + Enter
We are
Chernobyl notebook. Part of 3"General Council" or as chosen by the commander-in-chief of Wrangel
Military Reviewin Yandex News
Military Reviewin Google News
84 comments
Information
Dear reader, to leave comments on the publication, you must sign in.