They are set on Russia. Team "front" for terrorists

April 26 2018
56
Two militants in Derbent who resisted the forces of law and order were eliminated. On the same day, the cell of the terrorist organization Hizb ut-Tahrir al-Islami (banned in Russia) was neutralized (banned in Russia) in Tatarstan, its members 14 detained. Earlier, 9 terrorists in Derbent, who were preparing the terrorist attack in St. Petersburg during the May holidays, were destroyed. Eliminated militants in Stavropol. Two members of the Dzhebhat an-Nusra organization banned in Russia were arrested. 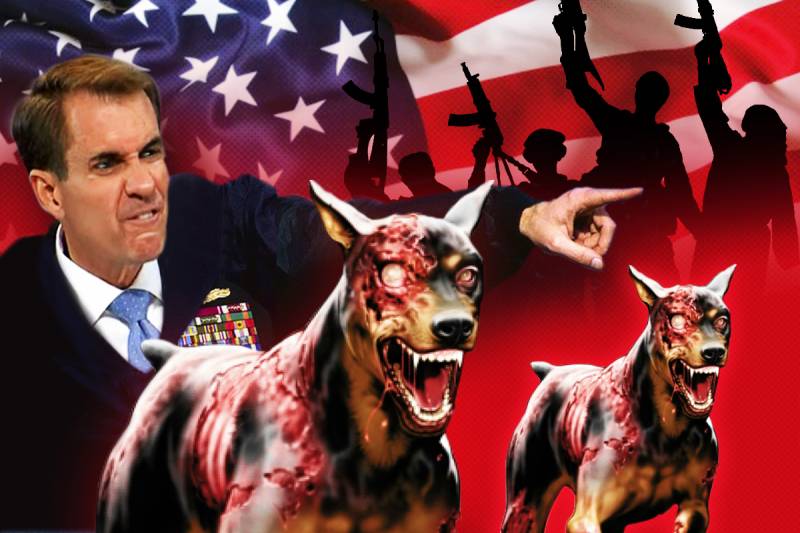 The saturation of the information flow devoted to this kind of events makes it possible to talk about a real terrorist war that is again launched against our country. Actually, it never stopped, but there were periods, sometimes quite lengthy, of “remission” or lull.

It is easy to see that each activation of the terrorist underground surprisingly coincides with the aggravation of our country's relations with the West. This pattern is so obvious that the growth of international tension is perceived by the Russian special services as a quite distinct signal to double the operational efforts. And try to work on pre-emption. As we can see, fortunately, in most cases it succeeds.

In connection with what is happening, it is impossible not to recall how a year and a half ago, in 2016, the then US State Department spokesman John Kirby made open threats of terrorist attacks in Russian cities in connection with the actions of our country in Syria.

This statement, in which the threat to increase aid to terrorists is clearly guessed, up to the transfer of MANPADS to them, as well as to intensify the underground in Russia, caused a sharp rebuff of the Russian Foreign Ministry.

Thus, the official representative of the Foreign Ministry, Maria Zakharova, stated that “similar ventriloquization about“ corpses in sacks ”,“ terrorist acts in Russian cities ”and“ loss of airplanes ”is more like a command“ face ”than a diplomat’s comment.

According to experts, even non-diplomatic, even for an American, was attacked by a representative of the State Department in response to the successful strike of the Russian Calibra at the terrorist control center in the province of Aleppo, in which several foreigners, including CIA employees and high-ranking military intelligence officers, were killed.

However, the support (and organization) of the terrorist underground in Russia by the special services of the USA and their allies is an open secret. These facts are so obvious that Vladimir Putin spoke about the interaction of terrorists with the North Caucasus and the US special services in the documentary film “President”.

“Once direct contacts between militants from the North Caucasus and representatives of the special services of the United States in Azerbaijan were recorded,” the Russian leader cited the example. “They really just helped there with transport.”

Sponsorship and support of terrorist and extremist organizations operating on the territory of Russia and other countries, which the US and its allies consider to be their opponents, is carried out through specially created for this "humanitarian" NGOs (like the British "Heilo Trust", which experts prepared militants) and “Islamic” funds.

Among them are organizations such as: The American Islamic Center (Islamic American Center), located in Washington; Islamic charity organization “Voice of Chechnya” (Islamic Relief Chechnya Аppeal), registered with the US Department of State; Islamic City Relief; Islamic American Foundation Zakat (Islamic-American Zakat Foundation); Islamic Action Center; The Chechen-Ingush Society of America (Chechen-Ingush Society of America, another name is Chechen Relief Expenses) and many others.

Most of these organizations, created in the early 90-x, continue to function today.

Actually, terror has always occupied and occupies a prominent place in the American arsenal of methods of hybrid warfare. Including due to its “cheapness”. After all, the organization of even such a monstrous terrorist act, as, say, in Beslan or Nord-Ost, requires incomparably lower costs than, say, a recent rocket attack on Syria, the cost of which, according to experts, approached one hundred million dollars.

Moreover, the sums allocated for the organization of terrorist acts do not require the approval of legislators and come from extra-budgetary funds, including from funds received from the sale of drugs and illegal sales. weapons (including the same terrorists).

The successes of our counterintelligence, fighters and operatives of the antiterrorist services are obvious: in recent years many terrorist attacks have been prevented, numerous active and "dormant" cells of terrorists have been neutralized.

But we must be aware that no skill of the special services will give an absolute guarantee that the enemies will not be able to find a loophole. Well, those who intend to destroy our country, as we see, do not intend to stop at nothing and are ready to use any weapon against us.