In the forefront - French 10


In a series of articles, we take a close look at the Allied counteroffensive on 18 July 1918 at Villers-Cotrets. We would like to digress from the details and throw a general look at the outline of this important battle - with an emphasis on the specifics of the application tank units of the French 10th Army - which was in the vanguard of the Allied offensive.

The events unfolded in such a way that, developing their maneuver, the German army, which failed to achieve decisive success either under Mondidier or Villers-Kotre, on July 15 tried to break through the allied front in Champagne.

It focused its main efforts on the Dorman district, where it crossed the Marne and advanced south of the river. In the western direction, between the pp. En and Marna Germans weakened their forces - the divisions stretched out in space. However, this front was considered calm. 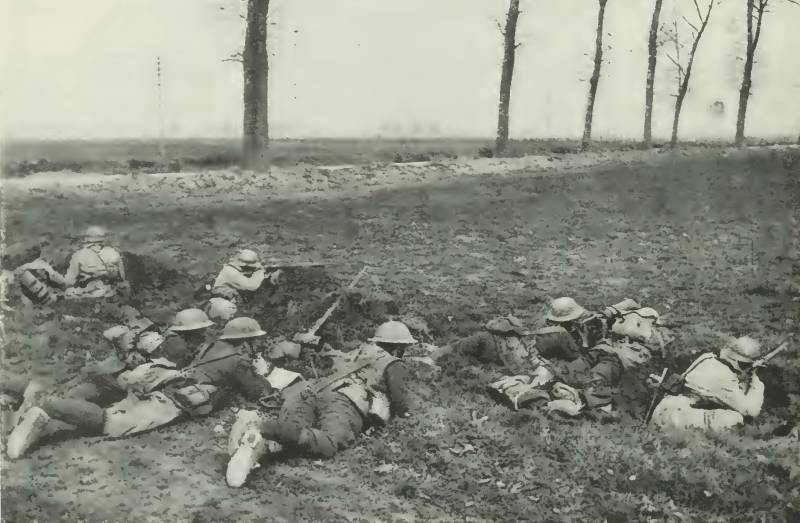 Brothers by arms: French and British fighters shoulder to shoulder on the path of the German offensive.

Therefore, the German offensive of July 15 was on hand to the Allies - contributing to the conduct of a maneuver, which had long been planned by the commander-in-chief of the allied armies. The French 10 Army is between pp En and Urk, the 6 Army between pp Urk and Marne is focused for an offensive. Tactical surprise was to ensure the massive use of tanks. 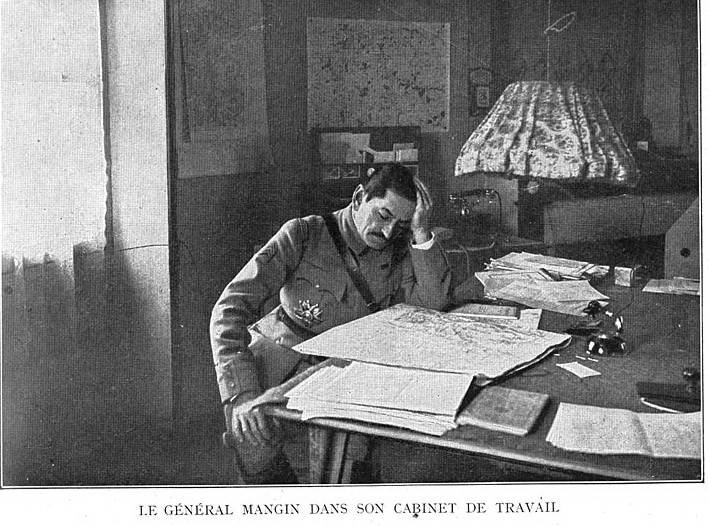 The commander of the 10 Army, General S. Manzhen.

The 502 Tank Regiment, located in Champagne, remains in its previous positions. The 503 th regiment is attached to the 6 th army. The remaining tank units must support the 10 Army.

The operational order of the 10 Army read:
“1. The task of the army - the army goes on the offensive with the task of breaking through the front of the enemy between pp En and Urk and, without stopping, move in the direction of Fere-en-Tardenoi in connection with the onset of the 6 army.
2. The turn of the offensive. The 1 line: a ridge to the west of Pernant, Sakonen-E-Bray, Shoden, Vierzi, Willer-Elon, Lohne farm.
2 line: plateau between Shakriz and Ulshi de Chateau. Further progress will depend on the progress achieved and will be indicated during the battle.
3. Day and hour of attack - the offensive should begin on July 18 at N hours (the hour will be indicated additionally). Artillery training will not be. "

Unloading tank units was carried out with great difficulties - but, nevertheless, thanks to the energy of their commanders and the dedicated work of the crews, the tanks were in their positions on time.

Tank battalions attacked, as a rule, "breathing" in the back of the head to each other. Part of the divisions was fragmented and distributed among the infantry regiments.

On the night of the 18-e tanks arrived at the original position. Around midnight, a strong thunderstorm erupted, drowning out the sound of engines and the clank of caterpillars.

After the thunderstorm, a rather thick fog was formed, which partially held out in the morning - favoring the advancement of tanks.

In the 4 hours of 35 minutes, the artillery suddenly opened fire on the entire front - and the offensive immediately began. The suddenness was reached, and between 7 and 8 the interim milestone was busy for hours. 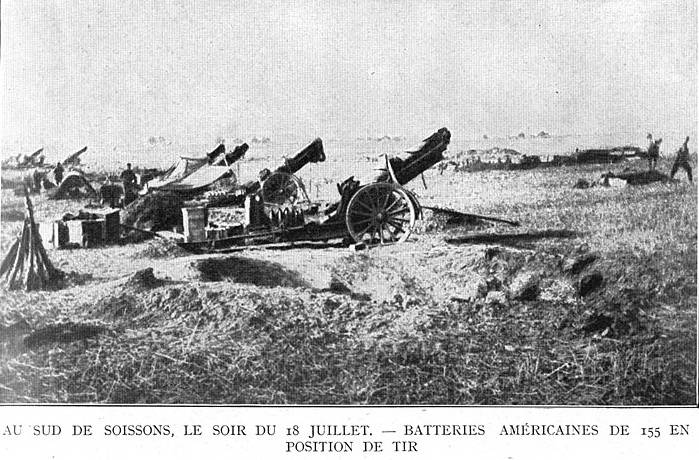 The fire with smoke projectiles did not bring the expected results, nor did the use of reconnaissance aircraft specifically designed to support tanks.

In 7 hours 15 minutes, watching the rapid development of the offensive and fearing that three battalions of light tanks will not be able to come on time, the army commander gave the first two battalions to 20 and the third battalion to the 30 corps.

By evening, the main frontier was overcome. Of the 225 battles involved, 62 was destroyed by German artillery (more than 25% of crews were out of action). The night on the 19-e was used to evacuate stuck, but efficient vehicles, for repair and for replenishing parts. 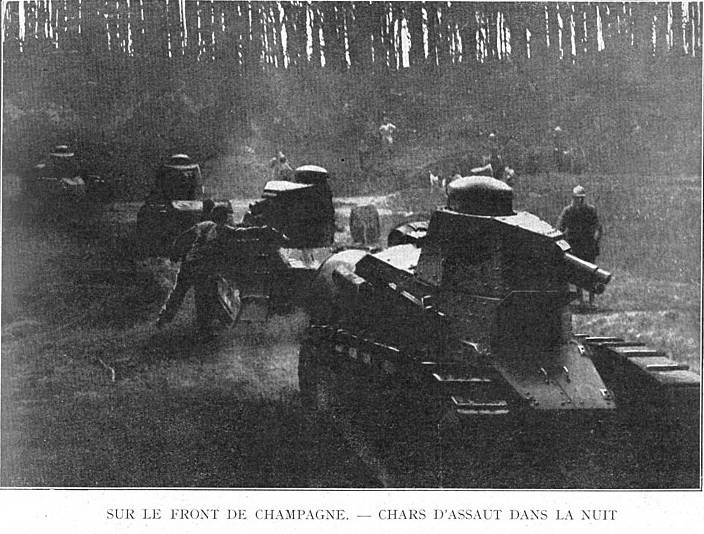 In the future, military units were to receive relative freedom - acting depending on the prevailing situation.

But the Germans are reserves, restore and strengthen the artillery system, hastily adjusting anti-tank defense. In most cases, despite the self-sacrifice of tanks and the heroism of the already heavily battered infantry, the allies only managed to make some progress.

July 19 from 105 tanks put into battle, 50 was destroyed by artillery fire.

The 20 day of July was marked by a number of local attacks, undertaken by a small number of tanks with the support of weary infantry. With the exception of the 30 Corps, where they approached the preparation of tank attacks more carefully, the depth of advancement did not correspond to the losses incurred: 32 tanks were destroyed from 17, people lost 52%.

July 21 1 Corps tankers in 8 hours launched an offensive. For the first time during an operation on the battlefield, an anti-tank gun announced itself. 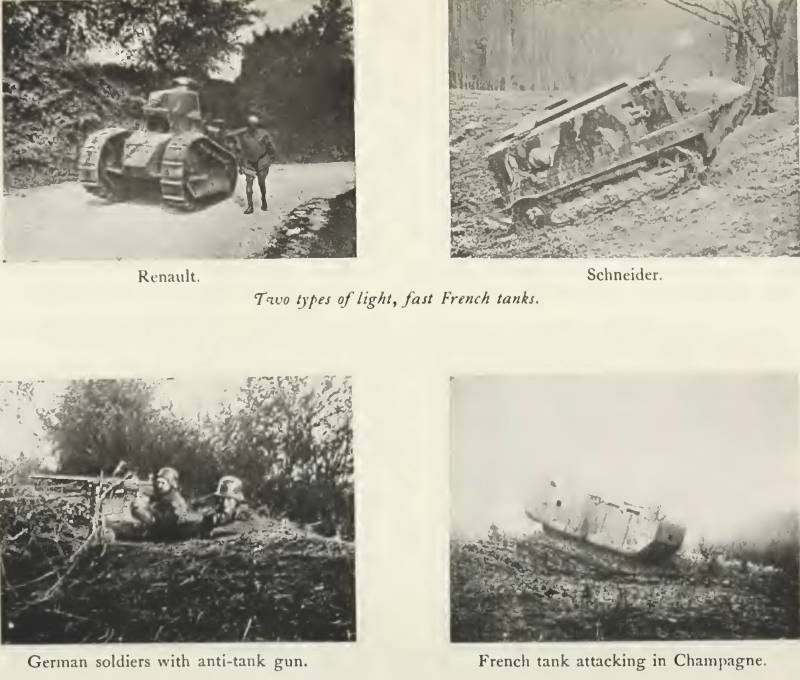 Types of French tanks and German PTR (lower left corner of the photo).

On this day, the 10 group was unable to push a single tank into battle.

The light tank battalion 3 managed to complete the 2 platoon.

By the evening of 21, it becomes clear that the Germans came to their senses and it was impossible to hope for the use of the success achieved by 18 in July. All tank units are transferred to the army reserve - in order to reform, recover and participate in the general offensive scheduled for the 23 number.

As the main goal of the offensive of the army was planned Ormes du Grach Rosa. The main blow was supposed to inflict 30 body.

The army commander sent instructions to subordinate commanders (up to infantry divisions commanding inclusive) that reiterated the basic principles of the use of tanks - in particular, stressing the danger of rapprochement of the latter with the enemy in daylight, noting the need to use smoke screens and the importance of giving tankers time to install between a connection.

The infantry of both advancing divisions of the 30 Corps has a very significant shortage - the battalions have, on average, 300 fighters. Especially significant was incomplete commanders. People are tormented by continuous battles. The Germans pulled all the free artillery and waited for the offensive. The effect of surprise was absent also because the attack was preceded by 45-minute artillery preparation.

In the 1 Infantry Regiment 5 tanks Saint-Chamon of 6, barely moving, failed. Of the 52 tanks that participated in the July 23 battle, 46 was disabled.

In the evening of July 23, heavy and light tanks were assigned to the army reserve. The tanks of the 10 Army received orders to fight to the last tank and to the last man - and in this unit they completed the task. 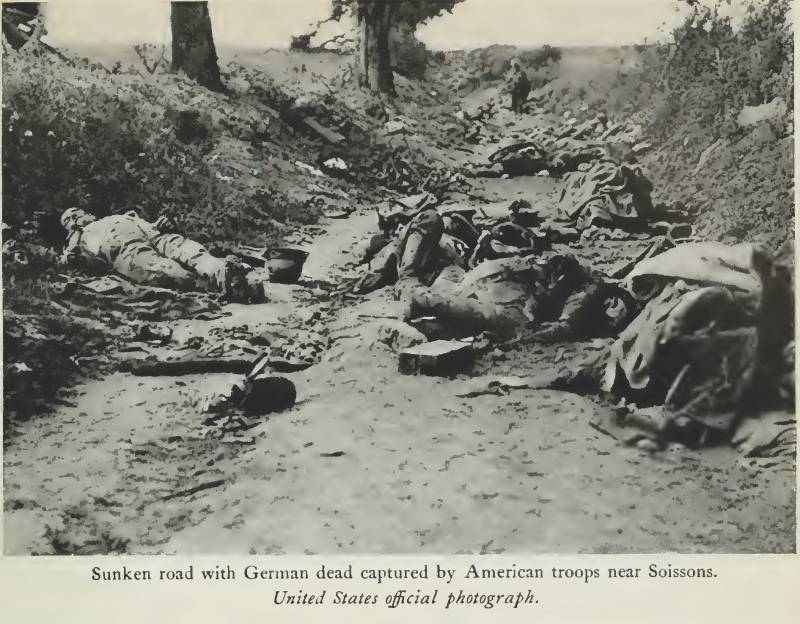 What conclusions can we draw on the results of the 10 Army?

The July 18 offensive is of particular interest as a typical example of an attempt to break through the front, which was temporarily established during the maneuver war.

The command, wanting to ensure the effect of surprise, is trying to concentrate in a short time a large mass of tanks. The distribution plan for tank units was finally approved only on the evening of July 15. In the process, we had to cancel orders, change transportation routes, etc .. All this led to significant delays.

Some tank units arrived just in time for the offensive, without having had time to establish the necessary connection with the infantry. True, part of the commanders knew the terrain.

Tanks were used on tank-accessible and pre-explored terrain, in large masses and on a broad front. The divisions of the 1 line, which received tanks, had, on average, one group each - which allowed the advancing units to immediately bring a sufficient number of vehicles into battle (which made it possible to quickly suppress the fire of enemy infantry). On the other hand, the tanks were to attack on a broad, about 11 km front.

Depth separation was provided, everyone knew the start time of the offensive, the boundaries.

A rather deep band fell under the first strike: the 1 line was located 7 - 8 km from the initial one, capturing the positions of most of the defensive artillery. The suddenness and use of masses of tanks led to a certain success. But in the July 18 offensive, tank losses were quite significant (62 of 225 brought into battle), and in the evening the combat capability of tank units was overwhelmed. What explains these losses? On the one hand, by the fact that the artillery of the enemy (largely due to the lack of artillery preparation) was not neutralized, on the other hand, by the incorrect use of attached tanks by some units.

The complete rejection of artillery preparation led to the fact that the Germans' anti-tank defense remained intact - and could act in full force. Hope for smoke ammunition and reconnaissance aircraft, as noted, has not justified itself.

July 18 offensive, launched in the morning, by noon brought all possible benefits. The Allied command, believing that the front of the enemy was broken, decided, in order to begin using success, to quickly eliminate the remaining centers of resistance that had delayed the advance.

In the afternoon and in the evening many local, mostly improvised, attacks developed, during which small tank units were brought into battle along with tired infantry — without the support of artillery.

For example, in the 13 watch, the Moroccan division, with the support of the 1 battery and 4 tanks, launched an attack on the Shesel ravine. As a result, the 2 of the tank was destroyed by direct-fire artillery fire - without a shadow of any success.

In 16 hours 15 minutes 8 th regiment of Zouav with 9-th tanks attacked the ravine Emel. The tired infantry could not move forward, and the 4 of the tank was destroyed by direct fire.

In 19 hours, the 8 zuav regiment again attacks the ravine Emel with the support of a company of light tanks. The company loses the tank, without winning at least some space. The command, considering that the enemy front was upset and the last effort could bring significant results, decided to act quickly - using all available forces. But small tank units thrown into the attack with battered and tired infantry units, without artillery support, could not overcome the resistance of the Germans.

The use of tanks in such conditions could bring only failure. As soon as the Allies stumbled upon the new solid resistance of the enemy, it was necessary to re-organize a general offensive on a fairly wide front, bringing in fresh units of infantry and a sufficient number of tanks. The organization of such an offensive was the responsibility of the relevant command instances, which in fact relied on chance.

And on July 19, 20, 21, parts of the 10 corps continue their fading attacks - with less significant forces. German artillery in turn concentrates fire on tanks and infantry — and the latter suffer heavy losses. But even in such a situation, the tanks are gaining tactical successes - which the tired infantry do not use. And the results are insignificant or zero.

Finally, the command is organizing a general offensive, launched on July 23, but time is lost. The enemy, who was waiting for the offensive, pulled up fresh reserves and restored artillery defense. Yes, and the offensive was carried out by exhausted infantry and hastily equipped tank units that operate on a narrow front - without sufficient cover against enemy artillery. The offensive ends in failure.

One of the features of the July 23 battle was the lack of infantry combat capability. In some sections of the tanks have achieved results that could not be used by infantry. Enemy resistance was eliminated, but the infantry did not follow the tanks.

Marines threw themselves into shelters, refusing to go forward - having lost all their fighting ability. The actions of the tanks made it possible to significantly reduce the loss of infantry, but naturally they could not save the infantry from losses. Once again it is worth emphasizing the great importance of the interaction of tanks and infantry. But if the infantry has lost the ability to attack, then no tanks will be able to carry along the infantry, which can no longer or does not want to move forward.