29 cities, 55 thousand people. Shoigu spoke about the celebration of May 9 in Russia

April 20 2018
23
More than 55 thousand people and 1,2 thousand units of military equipment will be involved in military parades of 9 in May across Russia, Russian Defense Minister Sergei Shoigu said, Interfax reports

In addition to Moscow, military parades will be held in 28 cities of Russia. Over 55 thousand people will take part in them, as well as about 1 pieces of equipment. Aviation about 150 aircraft will present a component
- said S.Shoigu at the exit meeting of the board of the Ministry of Defense of the Russian Federation 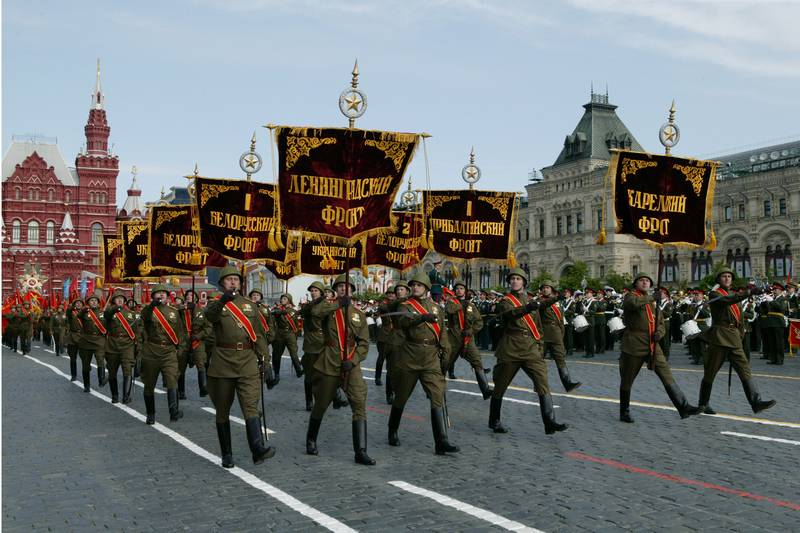 According to the minister, more than 73 thousand people, 13 units of weapons and military equipment and 159 aircraft will be involved in the military parade on Red Square in honor of the 75 anniversary of victory in the Great Patriotic War.

The structure of the mechanized column will include promising models of equipment, in particular support combat vehicles tanks, multifunctional robotic systems, the latest anti-aircraft missile systems. For the first time, Su-57 fighters, as well as Su-Z0SM, MiG-29SMT, will fly over the capital
- noted the Minister.

He added that this year for the first time in the parade, the pedestrian calculations of the military police of the Ministry of Defense of the Russian Federation, the Military Academy of the Army Air Defense named after them. Vasilevsky (Smolensk), a branch of the Nakhimov Naval School (Sevastopol), as well as two educational institutions of the troops of the National Guard of the Russian Federation - the Saratov Military Institute and the Moscow Presidential Cadet School. Sholokhov

A meeting of the board of the Ministry of Defense of the Russian Federation takes place on Friday in a closed regime from the media.