The picture emerges. Why among the targets of attacks on Syria was Doumeir?

April 18 2018
70
Today, the term of the ultimatum put forward by official Damascus regarding the leaders of several terrorist groups in Eastern Kalamuna - the area near the border of the SAR and Lebanon has expired. These territories are currently under occupation by militants from the “Jaish al-Islam” and “Jaish Tahrir ash-Sham” factions (* banned in the Russian Federation).


The leaders of the terrorists said that they were not going to leave the occupied territories.

The Syrian military command in response to this forms shock groups that will deal with the issue of the de-occupation of Eastern Kalamoun.

A few hours ago, airplanes of the SAR Air Force launched air strikes against terrorist targets in the Eastern Kalamun area. According to the latest data, a warehouse with ammunition of militants "Jaish Tahrir ash-Sham" * was destroyed. After that, the CAA command again offered the militants to sit down at the negotiating table and stop resistance, making it clear that those have no chance. Deadline - 23: April 59 18. 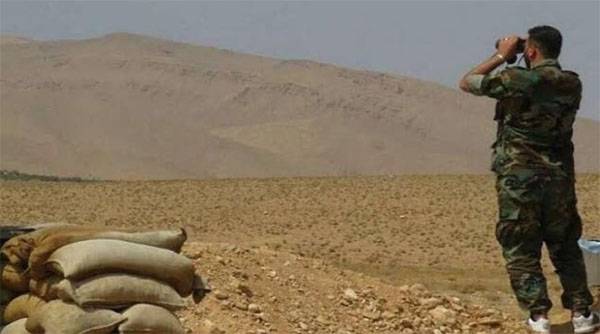 Syrian military intelligence notes that several thousand militants are currently dispersed across the Kalamoun mountain range near the border with Lebanon.

The greatest concentration of terrorists was noted at Mount Batra and the nearby settlement of Al-Nassiriyah.

The following fact draws attention to itself: one of the targets of rocket attacks and attacks by radio electronic means was the Syrian military airfield Doumeir. According to some information, it is from this airfield that airplanes of the SAR Air Force are now taking off into the air, striking terrorists in the area of ​​the mentioned Batra. Does this mean that the purpose of the strike against Dumeyru was an attempt to save the very terrorist conglomerate that took shape on the border of Syria and Lebanon and today still has the opportunity to receive external supplies?

It is important to note that Dumeirah’s terrorists “Jaish al-Islam” * tried to launch a counter-attack on the CAA after the missile support of the “coalition”, but were stopped by powerful fire. Yesterday, hundreds of militants in the area were surrounded, and eventually laid down weapon.
Ctrl Enter
Noticed oshЫbku Highlight text and press. Ctrl + Enter
We are
Reports from the militia of New Russia for 29 August 2014 of the year
Military Reviewin Yandex News
Military Reviewin Google News
70 comments
Information
Dear reader, to leave comments on the publication, you must sign in.