Weekend reading. Russia again did not appear on the Third World

April 15 2018
233
The West, or rather the American project of a unipolar world, in recent years has come to an unequivocal understanding of the fact that, for all the modesty of the Russian economy, Russia is quite ready to crowd the United States and its vassalism in the geopolitical arena. I came to understand that the country had become “too stable” (in comparison with previous time periods), despite numerous unresolved internal problems. ... And the fact that, despite the criticism of the president’s actions, coming from “all the irons”, social consolidation has been at a very high level since perestroika times.


And the same States, together with British "best friends", who are also clinging to the straw of American unipolarity with all their might, have nothing to do but try to go with the trump cards, betting on what they have already done on the pair historical periods. We are talking about an obvious attempt to drag Russia into not just a military conflict, but into a full-scale global war, in the muddy waters of which the fish of the disintegration of Russia was once caught.

History did not forget the situation with the beginning and results of the First World War, when frank provocation ultimately led to rivers of blood and the collapse of several empires, including the Russian Empire, against which the British crown came out victorious - dry from the same muddy water. But then, as you know, people still had no idea what the Cold War was, what a unipolar or multipolar world was.

But this did not prevent the then leadership from engaging in a ridiculous adventure with the sole purpose of demonstrating "how well Russia knows how to fight." While the army was fighting on external fronts, the geopolitical adversary took advantage of the situation and opened the front, for Russia it was internal. As a result, it was on this front that the crack went, which turned the empire from one of the world's leading economies at that time into ruins. In the ruins, soaked in the blood of fratricidal war - the war of all against all.

Provocations and fakes with the allegedly downed "Boeing" by Russia, with the "total use of doping" by Russian athletes, with Skripale poisoning, with the "universal use" of Assad weapons, with the “oppression” of the Crimean Tatars, they share one common ground - to make Russia go into an uncontrollable state of rage, start a global war and finally collapse to the joy of the “partners”. The country is provoked with the help of courtyards "Ponto" in the style: well, what is weak, well, Russia, swallow ... Well, isn’t it clear what this is all about? - an explosion of emotions, self-flagellation, appeals to themselves against the background of the development of an inferiority complex. Professionals are acting against Russia, trying to touch the nerve and cause pain that can no longer be tolerated. And they strive to reduce the situation to the fact that Russia is the nerve itself exposed.

But the first (unless, of course, they survive in global chaos) will be shouting that "the authorities have not saved the country again", those who are the loudest today are shouting about the need to bombard NATO aircraft carriers with atomic bombs and drop tank divisions in Berlin, Paris and London.

With the Great Patriotic War and the Patriotic War 1812, there is no sense in comparing, since there was direct military aggression against our country. 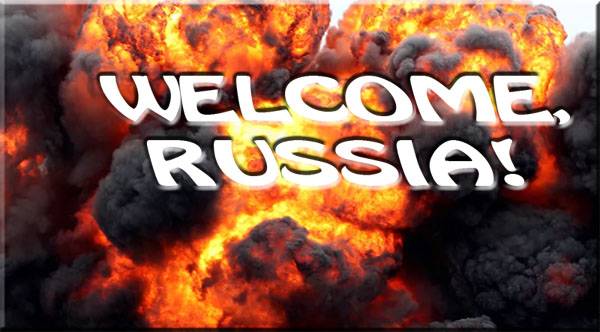 It is clear that I want to give up the sword and revenge on two wrecked excavators and three effectively separated Syrian barns, but something suggests that it is in this situation that the risk of turning Russia into a new pile of debris increases multiple times.

Or are we afraid of economic sanctions against money bags, which have long had little to do with Russia, not to mention the common people?
Ctrl Enter
Noticed oshЫbku Highlight text and press. Ctrl + Enter
We are
Military Reviewin Yandex News
Military Reviewin Google News
233 comments
Information
Dear reader, to leave comments on the publication, you must sign in.