For what reason, was the flight of the Commander-in-Chief of the Air Force Zelin interrupted? 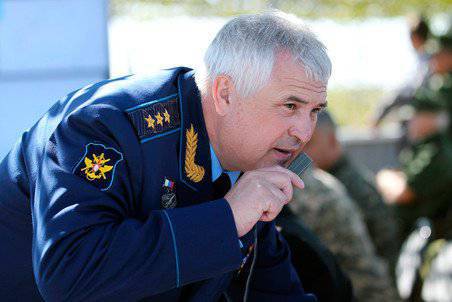 Serious passions flared up in the Russian press and among military personnel in connection with the resignation of the Commander-in-Chief of the Air Force, Colonel-General Alexander Zelin. Last Friday, Zelin was relieved of his post by presidential decree, reportedly of his own accord. However, such an interpretation apparently did not suit everyone, and the versions of the dismissal of the Commander-in-Chief of the Air Force of the Russian Federation fell like large hailstones, leading to a lot of noise.

According to some reports, the resignation of Alexander Zelin took place because he did not want to head the Zhukovsky Academy. According to other sources, Zelin began to realize that his powers began to decrease steadily, and that the role of the Air Force in Russia fell, which is why he decided to write a report on his own resignation. There is another opinion: Zelin crossed the road to the Chief of the General Staff, General Makarov, by expressing tacit disagreement with the decision of the General Staff to transfer control of the military aviation in the county. In general, there are many conjectures, versions and assumptions, but it seems that this resignation is too much inflated.

In the end, if we are talking about the unwillingness to head the reformed Academy from Zelin, didn’t he at one time initiate the very reform when the first two Academies (Zhukovsky and Gagarin) were merged into one, and then went free across the expanses of Central Russia. It turns out that Commander-in-Chief Zelin himself took the path of reform, actively supported by Nikolai Makarov, and then suddenly began to express discontent, in fact, with his own initiatives. The epic with the unification of the Air Force Academies and the relocation from Moscow and Monino to Voronezh at one time was not impressed by most of the teaching staff of world-famous military universities. There are a number of published letters addressed to the President and the Premier that the decision of the Ministry of Defense is blocked. But the car has already begun to rotate its blades. And Zelin took an active part in this epic, and now, of course, does not want to meet as a leader with those people whom he had some time ago subjected to a kind of integration. Apparently, the authorities decided to give Zelin a kind of chance to deal with the educational institutions that are within his competence, but the general didn’t want to come face to face with those whom he “reformed”.

If we consider the option that, to put it mildly, Alexander Zelin didn’t like the idea of ​​reducing the powers of the Air Force Commander-in-Chief, then who can we reduce the reduction of our own powers? Obviously, the colonel-general was not counting on reducing, but even on expanding powers. At one time, Zelin said that the new troops - East Kazakhstan (military-space defense) should not just be urgently created in Russia, but also should become part of the structure of the Air Force. However, the wishes of the general were implemented only on 50%. VKO really appeared in our country, but they did not fall under the wing of General Zelin. The newspaper Kommersant reports that even then, the Commander-in-Chief of the Air Force wanted to file a resignation report, but something prevented him from doing so. And this “something” could be the thought that the time when the EKR will nevertheless pass under the leadership of the general will come. But, apparently, did not come ...
Former Commander-in-Chief of the Air Force, Pyotr Deinekin, retired Zelin and the ongoing reforms in the Air Force saw, not a lot, a little, a return to 1941 year. In his opinion, all these actions of the authorities are aimed exclusively at the destruction of the Air Force and at the weakening of the defense capabilities of Russia.

Of course, the opinion of such an authoritative expert must be considered, but still the ex-commander-in-chief is too exaggerating. The fact is that any reform in Russia causes a hurricane of emotions and it seems only anti-people. One cannot but agree that the reforms can be both successful and rather dubious. But it is also impossible to switch to full inveterate conservatism. No self-respecting state can reach a decent level of development without reform.

In the end, if Zelin really saw in the reform of the Air Force a certain threat to the national security of Russia, then he, as a real Russian officer, was not supposed to pout and write resignation reports. Can this really help the Air Force? There was one - they will find another, as we know, there are no irreplaceable ones ... Therefore, if there was a “own desire” of the colonel-general, then it looks like lip-blowing, and not real help to his department. Writing a report is much easier than going to the end and getting what you want. Well, if “own desire” is just a myth, then Zelin, quite likely, simply paid for the lack of zeal when working on the State Defense Order.

By the way, exactly this point of view is expressed by the Deputy Chairman of the Duma Defense Committee Sergey Zhigarev. He is confident that for some time now Zelin began to fulfill his duties, as they say, on the parking brake. Perhaps this is the very lip inflation after the failure of the EKO under the spheres of influence of Zelin.

This version is all the more similar to the truth in connection with the fact that for some time now the Air Forces Commander-in-Chief have been entrusted with functions, including the purchase of aviation military equipment. And the formation of the state defense order in this area has not yet reached not only real purchases in 2012, but also 100% contracting with manufacturers. If the matter is really in the suffering state defense order, then we can expect that the removal of the Commander-in-Chief of the Air Force is far from an isolated case of the government’s “response”. More recently, it turned out another problem with the conclusion of contracts in the field of the Navy. Only now, the Commander-in-Chief of the Navy, Vladimir Vysotsky, is more actively promoting reform than Alexander Zelin has recently done. And the active “for” can often overshadow even the very need for the realization of the state defense order.

Let us hope that all these withdrawals and rearrangements in the High Command will not become just another smoke screen that distracts from the real problems associated with the actual failure of the State Defense Order-2012 by the Ministry of Defense.